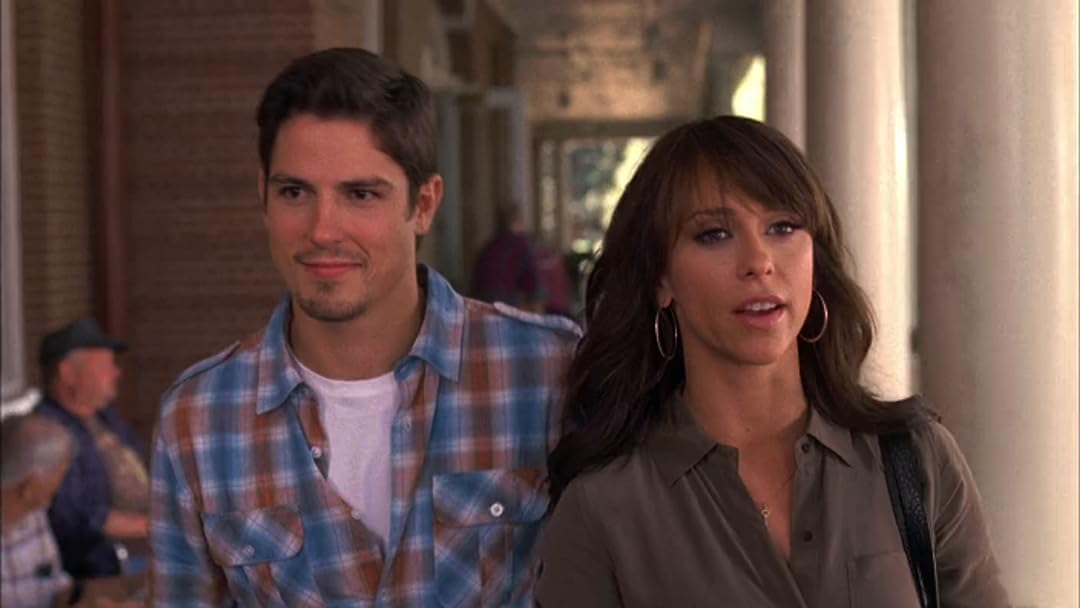 (2,028)
7.51 h 35 min2011PG
Susan Allison, jaded TV reporter, receives a sentimental Valentine's Day news assignment: the story of Caroline Thomas, who has waited 60 years for her pilot husband -- declared missing in action during World War II -- to return to her. Stars Betty White and Jennifer Love Hewitt. From the Hallmark Hall of Fame Collection.

AlbuquerqueReviewed in the United States on August 16, 2020
5.0 out of 5 stars
A truly touching movie that has Love and Suffering with FEELING!!
Verified purchase
Betty White and Jennifer Love Hewitt were excellent actors in this Heart Breaking Story Movie!! I, almost forgot
Sean Faris as the Grandson to Betty White's character! I have known many people who have gone to WAR and never came home!! Another movie that is simular to this movie is The Christmas Visitor!! These movies bring out emotion, especially during the Holidays as these do!! An excellent movie on a touchy subject of a loss from WAR!! At times I wonder if we can learn from our losses?? With HISTORY as it is....not so!! These movies cause the individual to reflect with in ourselves the HURT!! I HOPE that OUR LORD hears our cries for our LOSSES and VOTE for THE POLITICIANS TO WORK OUT PEACE!! EACH OF US NEED A BREAK from this repeating cycle!!
13 people found this helpful

Lance W.Reviewed in the United States on May 3, 2017
5.0 out of 5 stars
Betty White steals your heart - again and again.
Verified purchase
Very different from other Hallmark movies. It doesn't follow the standard format. A young reporter goes to interview an elderly woman who goes to sit in the train station every year on Valentine's Day. Her new husband had left on Valentine's Day to serve in the Pacific Theatre in WWII. She received a telegram that said he was MIA. She immediately grabbed hold of a thread of hope and declared, "Missing is not Dead." So for the next 70 years she went back to that same train station to wait for his return. The young reporter manages to use her connections to try and find out what happened to the missing soldier all those years ago. I won't tell you what they learned or how things transpired from there. Don't want to ruin it for you. I'll just say that Betty White is a lived it.fabulous actress, except for the most crucial scene. She didn't have to act that one - she's lived it, and I think relived it for this movie.
This is by far my all time favourite Hallmark film.
28 people found this helpful

Shopping NannyReviewed in the United States on January 22, 2021
5.0 out of 5 stars
Valentine's Day or not...definitely worth watching!
Verified purchase
If I could give this movie 10 Stars I would! I do not know if I should have waited to watch this on Valentine's day but do not regret that I didn't. If you ever saw the movie "Simon Birch" and you were blubbery mess then be prepared to be more so with this film. In addition, be prepared to not have a hanky but a baby blanket (trust me!...you'll be needing it). The cast that included the incredible Betty White and Jennifer Love Hewitt was truly amazing even with the obnoxious best friend/coworker. I think Matthew Gilbert of "The Boston Globe" said it best about Betty White's performance "She's a funny lady for sure but she can also nicely managed gravitas and vulnerability". I think perhaps because we are so used to seeing Miss Betty White in so many comedic shows/films that when you see her acting this deep level of emotions you cannot help your heart not to ache alongside hers. I cannot ever remember watching a movie and sobbed as much as I did in this one. I have watched it a second time thinking that I would not be caught unaware again in emotions and while it was not as much as the first time is still got me the next time around. Do I recommend this production?? How dare you even ask such a question!! After I re-read some reviews of the movie, I have come to realize that I did not get the special features others have written about...what gives??
One person found this helpful

bhakti lataReviewed in the United States on January 19, 2020
4.0 out of 5 stars
Surprisingly deep and predictably shallow
Verified purchase
The story between the older couple was surprisingly deep and powerful - I was contemplating their story long after the credits rolled (I cried buckets at the end). The woman remains deeply loyal against all odds and their love transcends life and death. The story between the modern couple is awkward and distasteful and utterly rote. High-powered career woman with a jerk/absent boyfriend starts to fall in love with some other guy WHILE still with said boyfriend - breaks off the old one to be with the new one because hey, it's Hallmark.
4 people found this helpful

Agape MusicReviewed in the United States on July 22, 2021
5.0 out of 5 stars
So glad I found this movie
Verified purchase
What a fantastic movie. So glad I found this. I give 5 stars very stars very selectively, and this movie is why! (If everyone gives five stars to everything, how to we give commendation to the items that deserve credit?!!!). Betty White’s acting deserved some kind of award for this movie, but then Hollywood rewards the sick, not the worthy. My poor frigate going to get sick of me trying to loan them this great effort.
One person found this helpful

S. J. CooperReviewed in the United States on January 31, 2018
5.0 out of 5 stars
5 Stars
Verified purchase
I LOVE this movie and I AM SO HAPPY they finally released it at a reasonable price! It's a wonderful love story, with a tragic mystery that is solved by the end. Betty White is as wonderful as ever. Jennifer Love Hewitt and Sean Faris have great chemistry. The two actors who play the young couple in the past also have great chemistry. If you're a fan of Hallmark movies, don't miss this one!
11 people found this helpful

Wesley DavisReviewed in the United States on March 30, 2015
5.0 out of 5 stars
Deeply Moving, Just "Feels Right"
Verified purchase
Bottom Line Up Front as the military, like Neil (who is in the Navy) would say: "This is what Hallmark Hall of Fame Movies are All About."

Deeply Moving story that makes everyone feel - in the special features they say how when taps was played on the bugle, not a dry eye among the cast - and it will be the same for you. Caroline tells how she is from a generation that prized service (and duty and honor) - and slowly that becomes a part of Susan's life - her being if you will - and that makes the story all the more precious. It isn't just about love, although that is the central theme, it isn't just about being faithful, although that is also part of the same theme (i.e. through love), but we learn how Neil gave of himself, and as the story unfolds it really makes sense how much Caroline keeps coming back, although her head knows Neil is gone, her heart says something deeper.

From the Porter, who comes by each year to say hello and compliments Caroline, to Susan's boss who is all business but in the end is all excited about the value the story (although he isn't a deep person like the main characters, he "gets on board" in his own way) to the friends and family around both Caroline and Susan to the senator whose staff helps dig up the critical information that lets them find Neil through one of the Filipino men who found Neil and his friend and helped them get back to health, it is a story that unfolds in such a way that I felt like I was living it along with the actors. When Caroline sees the Navy uniforms come up the walk to her house, and has a near PTSD like flashback to the Western Union man delivering the bad news so many years ago, only to find that they are bringing some of his personal affects and tell her that he has been awarded posthumously the meritorious service medal (I think that was the 1st one mentioned), a purple heart and the Navy Cross - you can feel what Betty White in a suburb acting scene, so subtle yet so powerful, feels that mixes grief with joy, sadness with pride. From the moment you see the uniforms, if you didn't have the tissues ready, you should pause and reach for them, for the rest of the movie.

This was a story that just kept on giving. Don't miss it.

I have a few dozen Hallmark Hall of Fame movies, all rated at least 4 stars, and this is right at the top. The special features are wonderful as well, and this "Making Of" is very much worthwhile as it seems they have all been on Harmark DVDs for the past several years. It tells how those are real people the Navy provided including the honor guard. You'll learn how when filming at the home, the real neighborhood learned that Betty White has a soft spot for animals so people kept coming by with their pets, Betty would want to see and hold the pets and thus the locals got to meet Betty White. Funny, actually.

My other Hallmark favorites: "Away and Back", "Have a Little Faith", "The Magic of Ordinary Days", "Candles on Bay Street", "Ellen Foster", "The Piano Lesson" and "The Love Letter".

che77ypop 11Reviewed in the United States on May 11, 2021
5.0 out of 5 stars
DIRECTOR - DARNELL MARTIN DOES IT AGAIN!!
Verified purchase
It's a Very sad Movie but I love Betty white and Jennifer love Hewitt, the story is amazing. Director Darnell Martin A Huge fan of her work with her FILMS such as, 1994. ( I like it ,like that) 2000. ( Prison song) 2005. (THERE eyes were watching God) and 2008. (Cadillac records) Again putting out another deep story that's based on her young Love journey about her husband in the war. This Movie is very Touching!
See all reviews
Back to top
Get to Know Us
Make Money with Us
Amazon Payment Products
Let Us Help You
EnglishChoose a language for shopping. United StatesChoose a country/region for shopping.
© 1996-2022, Amazon.com, Inc. or its affiliates