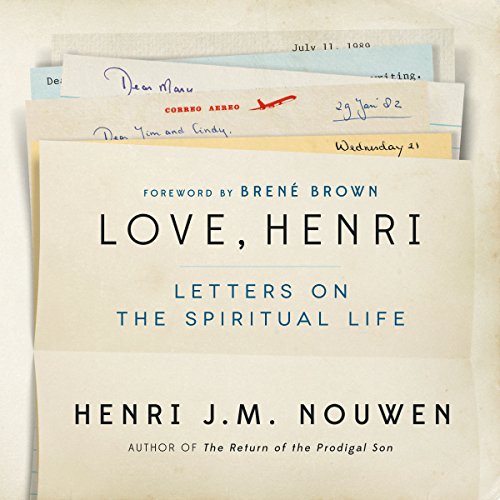 Over the course of his life, Henri Nouwen wrote thousands of letters to friends, acquaintances, parishioners, students, and readers of his work all around the world. He corresponded in English, Dutch, German, French, and Spanish and took great care to store and archive the letters decade after decade. He believed that a thoughtful letter written in love could truly change someone's life. Many people looked to Nouwen as a long-distance spiritual advisor.

Love, Henri consists of over 100 letters that stretch from the earliest years of Henri's career up through his last 10 years at L'Arche Daybreak. Rich in spiritual insights, the letters highlight a number themes that emerged in both Henri's work over the years, including vocation, solitude, prayer, suffering, and perseverance in difficult times. These deeply spiritual letters, sometimes poignant, sometimes funny, ulimately demonstrate the rich value of communicating with God through others.

Special invitation from Audible!
Learn more about Membership
List Price: $27.99
You Save: $9.00 (32%)
By completing your purchase, you agree to Audible’s Conditions Of Use
Sold and delivered by Audible, an Amazon company
Share

4.8 out of 5 stars
4.8 out of 5
94 global ratings
How are ratings calculated?
To calculate the overall star rating and percentage breakdown by star, we don’t use a simple average. Instead, our system considers things like how recent a review is and if the reviewer bought the item on Amazon. It also analyzes reviews to verify trustworthiness.

Degustibustus disputandum non est
4.0 out of 5 stars Intensely Personal
Reviewed in the United States on October 27, 2016
Verified Purchase
I have read and enjoyed much of Nouwen's work. Love, Henri, is a very different approach to him and his spirituality and life struggles. I often skip a book' preface, foreword, and even notes of the editor. But without reading these, Love, Henri, would have been difficult to understand.
Each letter in this collection is introduced in order to put the letter in context. Without these introductions, the book would have been impossible to read.
I found that I could only read short segments; this is not a book to sit and read through. I needed time to remove myself from Nouwen's struggles and personal afflictions and take a breath or two away from the book.
All in all it was an interesting experiment in putting this collection together for Nouwen's followers.
Read more
6 people found this helpful
Helpful
Report abuse

Joe Freeman
5.0 out of 5 stars The Priest/Professor/Mentor Who Cared Enough to Care for One Person at a Time
Reviewed in the United States on October 12, 2016
Verified Purchase
This being the year of the 20th Anniversary of Henri Nouwen's death, to have the privilege of reading some of his correspondence with people, chronicled-and-shared in this new volume reminds me of one of his most favorite statements: "Lord may this be my ministry: To join others on their journey, and help them to see Jesus." The correspondence shared in this new text illustrates this again and again.
Read more
10 people found this helpful
Helpful
Report abuse

Long Island Giraldo
5.0 out of 5 stars Nouwen Again
Reviewed in the United States on November 5, 2016
Verified Purchase
The first of two projected volumes, this work covers the Dutch priest and spiritual writer Henri Nouwen's adult life. It covers many aspects of his career and concerns: friendship, spiritual development, social justice, racial equality, concern for those discriminated against on account of sexual orientation or gender.
Overall, a very well-edited and engaging work.
Recommended, especially for Nouwen fans (he wrote 39 books and three million copies are in circulation), who will learn a great deal from this "insider's view) of his personality and soul.
Read more
One person found this helpful
Helpful
Report abuse

Lydia Newcomb
5.0 out of 5 stars Wonderful. Uplifting. Gut wrenching. Transparent.
Reviewed in the United States on February 7, 2017
Verified Purchase
Read this as part of a ladies' book club. Beautiful and heartfelt writing. I am reader of Nouwen's writings. Although I am not Catholic, his writings are relevant to service to humanity and the poor. He addresses some of his personal pain and eventual fallout between he and another priest who he loved deeply. The forward addresses Henri's struggle with his homosexuality, although he was celibate.
Read more
3 people found this helpful
Helpful
Report abuse

Your brother in Jesus, Michael
5.0 out of 5 stars Unconditional Love
Reviewed in the United States on December 7, 2016
Verified Purchase
Insight into the compassionate love in action of one of our most helpful and empathetic spiritual directors.
A man unafraid to share his vulnerability and so who invites us to a whole new way living as men of God, liberated from stereotypes of masculinity by inviting us to enter into the Unconditional Love of God for us, that sees us free to be who we really are, without fear in the libeating freedom of being loved and accepted without having to wear a mask or pretend that we are someone/somewhere that is basically a false idea of perfection and masculinity.
Read more
3 people found this helpful
Helpful
Report abuse

aaron kaun
5.0 out of 5 stars Outstanding Book!
Reviewed in the United States on August 19, 2017
Verified Purchase
Outstanding book. The author does a great job giving background info on each of Henri Nouwen's letter. Through each letter you are able to see Nouwen's heart and love for Christ. I have enjoyed this book greatly and if you are a Nouwen fan, this is a must have.
Read more
One person found this helpful
Helpful
Report abuse

Kindle Customer
5.0 out of 5 stars Thanks for this book!
Reviewed in the United States on December 16, 2016
Verified Purchase
Thanks to the vision and labor of this book's editor/creator/presenter, Henri Nouwen's life of loving, connecting, suffering, ministering is becoming for me even more life-opening than it has been in the always life-affirming messages in the books of his I've gratefully read.
Read more
2 people found this helpful
Helpful
Report abuse
See all reviews

JANE IRELAND
5.0 out of 5 stars Anguished Soul
Reviewed in the United Kingdom on July 12, 2018
Verified Purchase
This is a great insight into a man who did so much for other people
Read more
Report abuse

Mrs. L. J. Howland
5.0 out of 5 stars Henri Nouwen book, read one want to read them all.
Reviewed in the United Kingdom on October 6, 2018
Verified Purchase
Love all of Henri Nouwen books, he never disappoints.
Read more
One person found this helpful
Report abuse

J Scott
5.0 out of 5 stars Henri Nouwen
Reviewed in Canada on November 21, 2016
Verified Purchase
What a wonderful collection of Henri Nouwen's letters.
Not sure how they decided what to publish but these are touching!
Read more
Report abuse