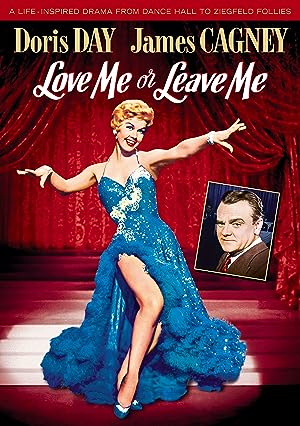 Love Me or Leave Me

johnfReviewed in the United States on August 12, 2019
5.0 out of 5 stars
Day and Cagney make this one of the best biopics ever.
Verified purchase
“Love Me or Leave Me” is a powerful film largely due to the performances of Doris Day and James Cagney. That it is also full of music adds to its popularity, though it’s more of a drama with a musical setting than a traditional musical. It’s also one of director Charles Vidor’s two greatest films along with “Gilda”. Based on the career of twenties music star Ruth Etting and her relationship with the controlling hoodlum Moe “the Gimp” Snyder, it’s probably the main reason Etting is remembered today. This is not an estimate of her talent but simply an effect of the passage of time.

The story is, of course, fictionalized in the way that Hollywood biopics are but is fairly true in its overall story arc and any minor divergence from the actual events is irrelevant. Day and Cagney, seemingly an unlikely pair, are wonderful together because of their difference in temperament. Day plays Etting in an understated way as a sweet woman who nevertheless has a steely determination to reach the top as a singer. She plays this naturally, without exaggeration. Contrasting her in the extreme is Cagney, whose Snyder is almost as explosive and psychotic as his Cody Jarrett character in “White Heat” The two play off each other beautifully. They had appeared together in the minor Warner Brothers musical “The West Point Story” and it was from that experience that Cagney recommended Day for the part.

Cagney received a Best Actor nomination from the Academy, though Day was passed over, many thought unfairly at the time. The film was nominated for Best Musical Scoring, Best Music and Best Song (“I’ll Never Stop Loving You”) and won for Best Writing (original motion picture story). Supporting players include Cameron Mitchell as Etting’s pianist Johnny Alderman and the always dependable character actor Robert Keith as manager Bernard Loomis. Keith had recently played Day’s father in “Young At Heart”. Harry Belaver, best known for his future role of Detective Frank Acaro in television’s “The Naked City” is likeable as Snyders sane henchman.

But it’s Day and Cagney’s show all the way and they carry every scene. The script does leave me with some questions. Was Etting as naive and pure as she is portrayed in the film or is this the Motion Picture Code? It makes her seem rather manipulative and calculating with the hopelessly obsessed Snyder. Even as it was, Day received a large amount of hate mail for portraying a loose woman who smoked, drank and sang in nightclubs.

Day neither looked nor sang like Etting. To my eyes Ruth Etting looked like a less pretty Jeanette MacDonald, but that may be the hair and styles of the twenties and thirties. Of course there would be no need to hire an actress who looked like Etting, who came from the age of radio and records. Surprisingly for the fifties, the film stays rather true to twenties and thirties fashions and styles, probably because it was based on a true story and was not a made up musical.

Two songs were written for the picture (“Never look Back” & “I’ll Never Stop Loving You”) and the rest are all Ruth Etting’s songs. The arrangements are updated to a brassy fifties style. Doris Day’s voice was warm and sweet or bright and clear as a bell, and she usually sang in long phrases (think “It’s Magic” or “Secret Love”). Ruth Etting had a usually higher and thinner voice with a bit of tremble in it (though the thinness could be partially due to early recording technology). Day sings the songs her own way, which makes the most sense. This is what the audience would expect at that time and she does a beautiful job with them. Twelve songs are presented as complete numbers and a few more are parts of montages showing her rise as a singer. Day does make one exception, and that’s with one of Etting’s signature songs, “Ten Cents a Dance”. She doesn’t try to exactly imitate Etting, but she does sing it in Etting’s style rather than her own. She sings in a higher voice than she had been singing, in short phrases and with a hint of trembling. It seems like she wanted one of the main songs to be a tribute to the film’s inspiration. Listen to them back to back if you can.

The film set a new box office high for a Day film and the soundtrack album was #1 for seventeen weeks. But more than that it’s a really good film for both Day and Cagney fans and for anyone else who might be inclined.

Nick ZegaracReviewed in the United States on January 10, 2017
5.0 out of 5 stars
No way to leave this love affair - a powerful musical in a gorgeous transfer
Verified purchase
Doris Day offers a powerful dramatic performance with her usual finesse in song, and James Cagney gives us a variation on all those goons he played in Warner's gangland pics of the thirties in this edifying, exemplary movie musical that is as potent as a melodrama as it is as a classic Hollywood homegrown musical. Based on the life of torch chanteuse Ruth Etting, MGM throws all its backing into a quality affair and comes up a trail-blazing winner. Lots to love here. Ditto for Warner Archive's newly remastered Blu-ray, looking years younger than it ought. Colors pop, grain looks natural, contrast is bang on and the DTS stereo is a wowzer to boot. Buy with confidence and prepare to settle in with one of the best 50s movie musicals in a transfer you will want to bask in and watch over and over again!
15 people found this helpful

JHB-4Reviewed in the United States on September 14, 2016
5.0 out of 5 stars
Day and Cagney shine in superb 1954 Etting biopic.
Verified purchase
Gorgeous blu-ray release of Doris Day's finest performance! "Love Me or Leave Me" is Hollywood "bio-pic" at its best. Superb musical numbers as Doris Day effectively takes on the repertoire of 20's jazz singer Ruth Etting. Jimmy Cagney tops the cast with an Oscar-nominated performance as Etting's "mentor" Martin Snyder.
This one is a real winner! Picture quality is stunning and the 62-year old sound is quite good.
10 people found this helpful

Walter YeoReviewed in the United States on October 1, 2016
5.0 out of 5 stars
Biopic of singer Ruth Etting.
Verified purchase
A wonderful biopic of singer Ruth Etting in which Doris Day plays against type. Miss Etting's singing career is both supported and hampered by her association with the racketeer Martin 'The Gimp' Snyder (played by James Cagney) who is trying to control her and believes she loves him. She is trying to break free and finds love with another person which annoys The Gimp leading to the films denouement. A umber of her most famous songs feature in the film.
4 people found this helpful

It's great to see this wonderful film in the blu-ray format. The colors are crisp, and the film looks as good as new. Day and James Cagney give their roles all they've got, and Cagney calls it one of his best films ever. I couldn't agree more. It's also, in my opinion, the multi-talented Doris Day's finest film performance.
4 people found this helpful

WillowwindReviewed in the United States on December 20, 2013
4.0 out of 5 stars
Unusual pairing but worked well.
Verified purchase
This fine musical based on the life of singer, Ruth Etting, who flourished during the 1920's and 30's..made the great Doris Day more of a star than she had ever been. Gone was the girl-next-door image. She plays the successful, somewhat ruthless, and unhappy singer to the max. Cagney shines as her gangster-manager who she feels forced to marry. Their fight scenes are something to behold even though he doesn't go so far to push a grapefruit in her face. The music includes the songs Etting sung. My favorite was "Ten Cents a Dance." When this movie first came out I actually bought the record and used to sing-along with Doris. It was hot! Worth a watch if you have never seen it! Remember though it is not a comedy. And Jimmy Cagney was no Rock Hudson!
One person found this helpful

Anthony DamatoReviewed in the United States on August 21, 2000
5.0 out of 5 stars
All-Time Best Musical Biography
Verified purchase
There are many wonderful Hollywood musicals that take up the story line of a composer or a singer, like LADY SINGS THE BLUES, NIGHT AND DAY, WORDS AND MUSIC, DEEP IN MY HEART, THE AL JOLSON STORY, and RHAPSODY IN BLUE. But the one movie that stands out from all the rest is LOVE ME OR LEAVE ME. It is the absolutely perfect blending of story and song. The one that comes closest to it is the AL JOLSON STORY, but the "story" in that one isn't as related to the plot as this Doris Day-James Cagney production. Here, the songs Ruth Etting sang in the era of the Great Depression somehow help tell the story of her life; maybe her most popular songs were the ones that she felt closest to. Well, this movie certainly brings out the relationship between song and story in a way that has never been equalled in a biographical movie. Of course, "biography" puts a limitation on musical films; there is no room for the totally free-wheeling creativity of films like SINGING IN THE RAIN or THE BANDWAGON. But it also imposes a kind of unity that grows out of the life story of the singer or composer who is the subject of the biography. And as we empathize with the story, we like the songs even more. I've often wondered why LOVE ME OR LEAVE ME is not given the acclaim it so richly deserves. Maybe some viewers are so taken with the charisma of James Cagney (the greatest all-around star Hollywood has ever produced!) that they are distracted. Maybe some viewers "get into" the story so much that they don't see all that's going on with the music. The cure for all this, of course, is to watch this great film over and over again, and then repeat the experience. It truly gets better every time! And, one final kudo to Doris Day, that remarkable, remarkable woman. She made absolutely no attempt to imitate Ruth Etting's voice, because Ruth Etting had a sound of her very own (like Bing Crosby's sound, which has never been imitated). No, what Doris Day did was to get into the Ruth Etting character so thoroughly that she made it her own. And the result is the same degree of poignancy that you experience in hearing the original Ruth Etting recordings! It's almost weird, hearing two totally different singers sing the same songs with the same emotion. I know of nothing else like it. Bottom line: enjoy this great movie in good health many many times!
45 people found this helpful
See all reviews
Back to top
Get to Know Us
Make Money with Us
Amazon Payment Products
Let Us Help You
EnglishChoose a language for shopping. United StatesChoose a country/region for shopping.
© 1996-2022, Amazon.com, Inc. or its affiliates