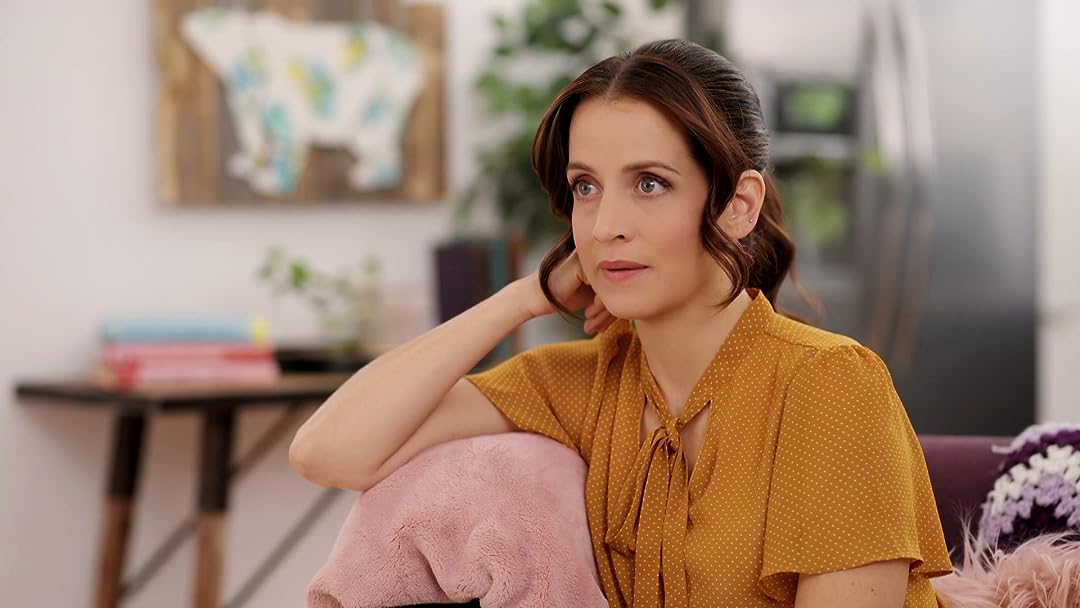 KristenReviewed in the United States on October 22, 2021
3.0 out of 5 stars
A Pleasant Watch
Verified purchase
This movie has ups and downs. It's certainly not a cinematic masterpiece but it is a nice movie. I thought the acting was good for the most part. The script definitely lacked and was cheesy at times.
One person found this helpful

Joseph B. Ph.D.Reviewed in the United States on May 22, 2022
5.0 out of 5 stars
Nice Clean Lovely Film
Verified purchase
Really enjoyed the contrasting of worlds and all the nature scenes. Beautiful Love story too!
One person found this helpful

H. BalaReviewed in the United States on October 8, 2021
3.0 out of 5 stars
"I'm busy being 'fat' and 'mannish!'"
In Chicago, Charlotte Meyers is living her best life. I mean, for cripes' sake, the city of Chicago once presented her with the Community Spirit Award. She's a Rhodes scholar, a celebrity psychologist, and holds a PhD from Oxford. Charlotte has authored three bestselling books on love and relationships, with her upcoming fourth one predicted to be another triumph. This latest work is more personal for Charlotte. The book focuses on her rocky romance with her boo, Doug, and how they salvaged their relationship. They're set to marry in a month. More great news: rumor has it that Charlotte may be getting her own talk show.

But not so fast. Because who knows what's gotten up Doug's bum? We never do find out exactly. He's not much in the movie. But Charlotte was on a talk show excitedly promoting her new book which, if you'd already forgot, is about her and Doug's working out their issues. No sooner does the interview end than here's Doug with some late-breaking news for Charlotte. Turns out, he's not as down with their reconciliation as Charlotte is. Ergo, the dump.

Maybe it's just me, but Charlotte seems more concerned about how the abrupt break-up would impact her career than her own personal life. And maybe she was right to fret. Suddenly, her new book is scrapped, and the tv network's put the kibosh on all talks of her hosting her own talk show.

Her editor advises her to stay away from writing about relationships for a while, but that she does need to write a new book, and quick. Cue Charlotte's getting trapped in an elevator with a wilderness guide and her being so extra as she has her panic attack.

I don't blame the wilderness guide, Rob Wilson (Steve Lund), for not being that impressed with the self-absorbed Charlotte. But he's got other things on his mind. When not guiding clients thru the wilderness, Rob runs a canoe business in Minnesota. He's only in Chicago to visit his dad who fell off the roof and now requires surgery on his leg. Here's the pickle: his dad doesn't have insurance anymore. He lost his job months ago. Rob's taken it upon himself to come up with the money to pay for the surgery.

For Rob, it's serendipity, ish. The manic lady he was stuck in the elevator with has had an epiphany. Her idea for her next book: The City Girl's Guide to Wilderness Survival. Now, if only she can sell the idea to the one wilderness guide she knows. When Rob rejects her offer, an incredulous Charlotte channels her inner Karen: "I don't think you recognize me. I'm Charlotte Meyers, the author?" It's not until Charlotte mentions that the job will pay well is Rob reluctantly persuaded. The money'll pay for his dad's surgery.

Charlotte's big notion is thirty days in the wilderness of Northern Minnesota, with Rob showing her how to survive roughing it, and, voila, a book afterwards. Only, it's not quite in the wilderness, come to find. Charlotte does get to stay in a cabin, never mind that there is no WiFi or mirrors.

LOVE UPSTREAM is an okay watch. I rate it 3 or 3.5 out of 5 stars. I wonder if Kimberly-Sue Murray, who plays Charlotte, gave an eye roll when she first read the script? It calls for her to be excessive with her histrionics for the first, oh, let's say quarter of the movie. Later, she calms down and transitions into being a personable character. There's Charlotte now, making friends with Rob's business partners, down-to-earth Minnesotans whom she would have considered provincial earlier. Hey, at least her metamorphosis isn't too jarring. By the time Rob's shop is broken into and all his canoes stolen, Charlotte's offer to help doesn't jolt the viewing audience.

Where's the dramatic conflict? For sure it's not coming from Charlotte and Rob. They've mended fences some time ago. Fact is, Charlotte's such good buds with Rob and his business partners, Mike and Tina Abbott, that she's invited them to hang with her in the big city. She opens up her apartment - swank with a minimalist style - to them. Thru her contacts, she even treats Tina - who let's call her big-boned - to trying on a rack of elegant dresses, the latest in fashion. It's photos of Tina decked out in haute couture and a gussed-up Rob that trigger the big dramatic conflict.

Suddenly, the tv network's back in the Charlotte Meyers business. And, remember, there's a **plot spoiler** alert. Only, the suits want nothing to do with Charlotte's pitch of "City Girl's Guide to Wilderness Survival." They'd gotten a synopsis of her manuscript, except that her editor had modified things to totally misrepresent what she'd written so that her newfound friends now come off as these pathetic, backwoods losers. So, now, the oily network exec wants Charlotte to host a makeover show. The network's seen the photos and think Rob and Tina would be ideal candidates for the first episode, how Charlotte polished up a rube like Rob and the "fat and mannish" Tina. One wishes that Charlotte would've gotten ahead of the coming disaster. You and I being veterans of these rom-coms, we suspected right away that word of this would get to Rob and Tina before Charlotte could clear the air.

Going into the movie, maybe you anticipated eyeballing a whole heap of spectacular vistas set in the wilderness. Not so fast. Sure, Rob coaches up Charlotte in wilderness survival, but the training happens in the same places, either in that gap in the woods or by that spot by the lake.

To reiterate, it's an okay rom-com. You can't say the actors were bad since they were going off a script that doesn't ask much of them, acting-wise. The script, by the way, is pedestrian. This isn't a Hallmark movie; it's a Canadian-produced movie. But the plot and the clichés are very Hallmark-y. Unnecessary stuff gets thrown in, like that throwaway reveal that Charlotte's assistant is now seeing Rob's brother. The chuckles were few and far between for me, but maybe you'll get more yuks out of it. The best scene for me didn't involve the two leads, but, rather, a caustic Tina who shames a Karen who wanted to back out of paying for her canoe excursion. One could make an argument that Nadine Whiteman Roden ("Tina") is the best performer in this cast.

JReviewed in the United States on June 25, 2022
4.0 out of 5 stars
Enjoyed the casting in this clean sweet-romance
Verified purchase
The casting produced some decent acting. Enjoyed the leads and secondaries.

Was disappointed the two leads didn't head out on the survival week themselves. A missed opportunity with the screen play. I noticed other viewers had hoped to see that, too.
See all reviews
Back to top
Get to Know Us
Make Money with Us
Amazon Payment Products
Let Us Help You
EnglishChoose a language for shopping. United StatesChoose a country/region for shopping.
© 1996-2022, Amazon.com, Inc. or its affiliates