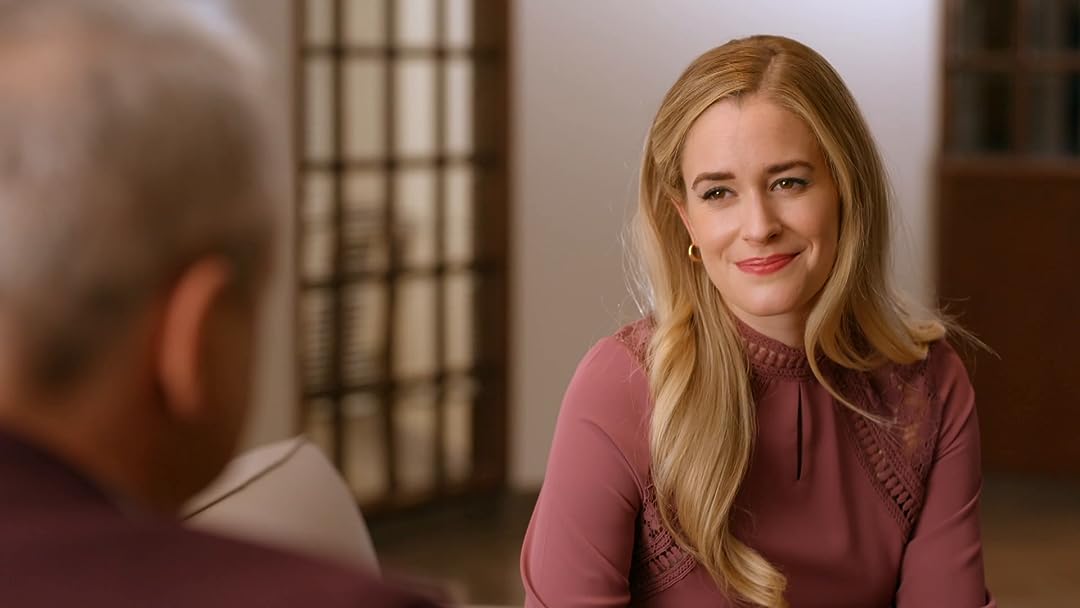 RomComConnoisseurReviewed in the United States on March 22, 2022
3.0 out of 5 stars
Trying a bit too hard
Verified purchase
This review is late enough that Brittany Bristow has already starred in a better film, “The Story of Love”. I reviewed it at 5 stars. In that show she was excellent, adorable and endearing, and showed her ample talent. So in watching Love in Whitbrooke, I was expecting that same level, and was not rewarded. This one has a bit too much giggling, a bit too much over-acting, and a bit too much cliché. I attribute these deficiencies to inferior direction and script.

Brittany is still adorable and performed well. Corey Sevier did not rise to her level and together they had only mediocre chemistry. To me that is on him.

In short, this was enjoyable to watch once, and I recommend it. But definitely check out “The Story of Love”.

3.5 stars rounded down due to cliché overload.

KristenReviewed in the United States on September 12, 2021
3.0 out of 5 stars
Over the Top Cheesy
Verified purchase
This movie actually has a scene with whipped cream on the nose, a flour fight & a bicycle built for 2 ride. The acting is extremely over the top cheesy all around but the story is sweet and the scenery is beautiful. It's definitely family friendly.

Amazon CustomerReviewed in the United States on November 15, 2021
4.0 out of 5 stars
Cute movie
Verified purchase
Lot's of typical "hallmark", but good acting.

H. BalaReviewed in the United States on September 7, 2021
4.0 out of 5 stars
not a bad rom-com, but, omigosh, that little kid was so extra
Ayy, it's another starring turn for Brittany Bristow! That's very cool. For a few years now, I'd seen Brittany shine in supporting roles in a heap of rom-coms, and I have stumped for her to bag her own starring part. She finally snagged the lead in 2019's Hallmark movie, Holiday Date, and you should check it out. She's back as the star in Love in Whitbrooke, which is also worth checking out.

She plays Amber Verdon, a world traveler for her job. As the top project manager for Marsh Technology, she's much in demand and is constantly being dispatched to that place and this place. She's currently in Chicago finishing up with her latest assignment. Next on the itinerary is Tokyo for something having to do with the Asian market and then it's on to Phoenix for the annual review.

But perhaps her days of mobility are dunzo. Her boss just offered her the director's position, but she'll be stationed in London. Amber's not sure about this. Her boss gives her eight days to decide. That's time enough to get back to her hometown and mull things over.

And that's another weight on her mind. Her mom (Catherine McNally) had called asking her to come home to Whitbrooke Harbor. Seems her dad (Rex Hagon) had severely sprained his ankle, and now the family needs help running the café. Her sister Charlene (Naomi Hewer) can't step in that much. She's eight and a half months pregnant. Anyway, Amber's looking forward to spending time with the fam. As well, Amber's visit coincides with the annual Founders Day festival. She hadn't been to one since college.

It's a bit of a conundrum how come Amber and Jason hadn't run into each other over the years, what with Whitbrooke Harbor being such a small town. Jason Taylor (Corey Sevier) and his baby sister Molly (Julia Tomasone) happen to be the last descendants of the town founders, Annabelle and Harry Whitbrooke. Jason is a master carpenter and works for the train station on the side. he's also super-busy helping to set up the coming Founders Day festival.

Amber and Jason first meet outside of a bus, and it's a brief and mildly antagonistic encounter, and I'm glad the plot didn't take the hostility any further than that. And maybe they wouldn't have ran into each other again if only Amber hadn't bumped into her old friend Beth on the street. Beth (AnnaMaria Demara) is directing a play for the festival, and she talks Amber into painting the backdrop of the play. See, Amber used to paint back in the day. And since a carpenter will be creating the set, Amber will be working closely with that fella. Who, unsurprisingly, turns out to be Jason. By the way, the play will concentrate on the founders, how they met, fell in love, and founded Whitbrooke Harbor in the 1920s. You looked like you wanted to know.

This being a Hallmark-ish movie, there needed to be a business in trouble. Amber soon enough gets an inkling that all is not well with the café. And, yeah, turns out, besides business being sluggish, her parents have fallen behind on their payments. Seems the new building owner had hiked up the rent. Her family could seriously lose the café.

As far as covering shifts at the café, Amber is eager to help. If she could figure out the difference between a cortado and a latte. As a project manager, she's more used to delegating than getting hands dirty. Luckily, there's a super-helpful café employee named Molly to show her the ropes. This being a small town, café Molly is also Jason's baby sister Molly. Molly, by the way, is attending her first year in college. She wants to be a graphic designer, except the college she'd picked out with that subject in mind is pretty far away. It'd be the first time she'll be away from her brother who'd taken care of her ever since their parents died.

This was an enjoyable, mildly humorous rom-com with the caveat that it has its flaws. Not only did the movie go all in with the cliché of the food fight in the kitchen, it doubled down with the water hose fight at the car wash. We are unbelievably lucky it isn't Christmas season yet, or there'd be a silly snowball fight, too. Brittany Bristow is super-likable, as always. Corey Sevier isn't as annoying as he is in other movies. The movie's great triumph is in not portraying the lead guy as a smug jerk. Sevier's character carries on being chill throughout the movie. He does lose his chill momentarily when we get to the 20-minutes-left-to-go mark and the scheduled bout of misunderstanding pops up, causing Jason to sneak off dejectedly, having assumed the wrong thing. It's a typical rom-com trope.

And since it's a low-budgeted romantic comedy, I guess the movie didn't pay enough extras to attend the Founders Day play. The turnout was pathetic.

By the way, whoever actually painted Amber's art pieces is really good. The backdrop painting for the play turned out amazingly.

Lastly, not to dump on kids (but I guess I'm gonna), the little boy who played Amber's nephew was just too damn precious. Do kids simper? I think this one did. I wish they'd gotten a kid who was more natural in front of the camera. Anyway, 3.5 out of 5 stars for Love in Whitbrooke. Good effort. But if someone pressed a sharp object to your carotid artery and made you choose between Brittany Bristow's (so far) two starring vehicles, go with Holiday Date.
See all reviews
Back to top
Get to Know Us
Make Money with Us
Amazon Payment Products
Let Us Help You
EnglishChoose a language for shopping. United StatesChoose a country/region for shopping.
© 1996-2022, Amazon.com, Inc. or its affiliates