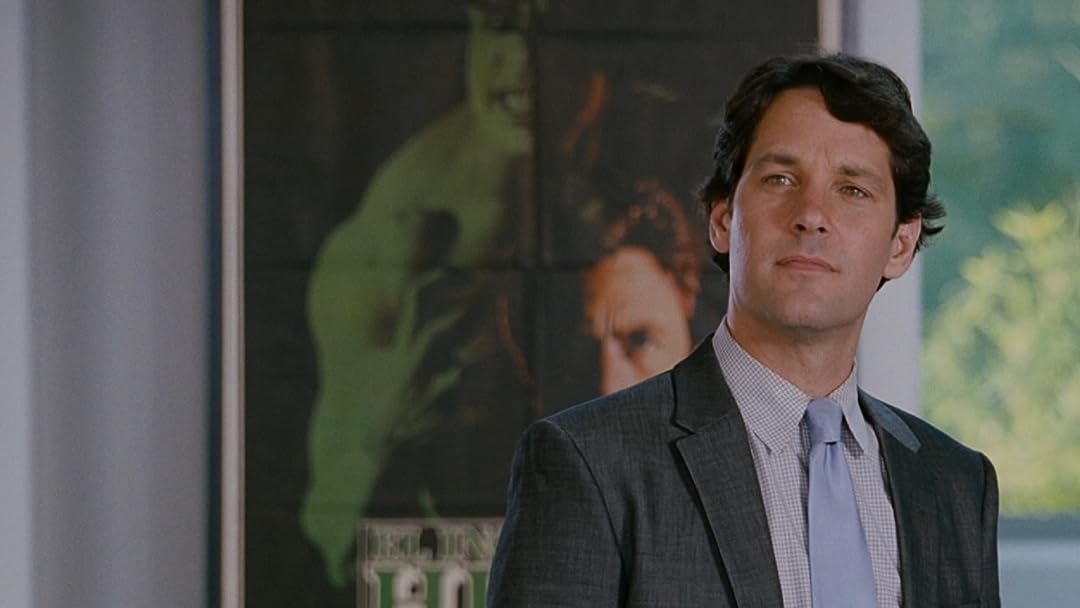 I Love You, Man

(5,971)
7.01 h 44 min2009X-RayR
Newly engaged, a successful realtor comes to the sobering realization that he doesn’t have any male friends to play the role of ‘best man’. With the wedding day closing in, he sets out on a hilarious journey to find a best friend.

joel wingReviewed in the United States on April 10, 2021
3.0 out of 5 stars
A bromance between Paul Rudd and Jason Segel
Verified purchase
I Love You Man features Paul Rudd in his second leading role who finds his first real friend Jason Segel. The movie is a guy film about bonding. The jokes are usually subtle such as when Rudd goes for a walk with Segel who’s got women’s boots on or when Rudd doesn’t know how to small talk with Segel because he’s never had any real male friends before. But there are some laugh out loud moments as well such as when Rudd gets down to Rush. The movie is a like a romantic comedy accept it’s a bromance.
3 people found this helpful

N/AReviewed in the United States on April 10, 2021
4.0 out of 5 stars
PRetty good watch
Verified purchase
HAd some funny parts and a few scenes we could have done without. Gotta get that agenda in there.

Over all though it was entertaining.

AdamReviewed in the United States on May 7, 2021
4.0 out of 5 stars
Funny movie, Funnier watching with friends!
Verified purchase
So this movie is about a man engaged to the woman of his dreams yet uncomfortable with the prospect of not having a best man for his upcoming wedding, a successful real estate agent with no male friends schedules a series of "man dates" in hopes of finding a suitable candidate for the big day. And what can happen with that?!?! Well, watch and see..But I do promise, you're going to have a lot of laughs! This story is helped greatly by the appeal of the actors. Paul Rudd, Jason Segel, Jon Favreau, Rashida Jones, John Hamburg, Jaime Preslly, all of them are fun to watch.

NC Savvy ShopperReviewed in the United States on December 30, 2013
4.0 out of 5 stars
Hilarious Movie That Appeals to Both the Sexes
Verified purchase
Overall: 8/10
Why not 10/10?
Well, some of the dialog seemed really unnatural or maybe it was just that the acting was not convincing. Also, Paul Rudd, handsome though he is, appeared to be suffering allergies, judging by the appearance of his eyes. The most authentic, believable character was Jason Segel's "Sydney". Rudd and Segel obviously had some on-screen chemistry that makes the movie succeed as a "bromance".

Rashida Jones's character is very much a secondary character but the reason for Rudd's character searching for a male friend. In fact, it seems to me that the female characters purpose in the movie are simply there for the male characters to flourish during the course of the movie.

Even though Rudd is the headliner for the movie, it's really Segel who has the best lines and delivers them the best.

For those who are Rush fans, it's clear that Rudd and Segel must be Rush fans in real life because the band and their music play a role in the movie and reinforce Peter and Syndey's friendship.

I liked the music in the movie even though I'm not a Rush fan.

Some of the humor was puerile but I suppose this was to be expected for a Judd/Segel movie. Some of the gags were recycled in the movie that I found annoying. Spoiler alert!

e.g. Peter attempting a reggae accent and sounding like a leprechaun. Sydney's dog pooping and Sydney not bothering to pick it up.

This is a memorable comedy but for me it's certainly not one of the funniest movies I've seen.

RIck OxReviewed in the United States on December 24, 2014
5.0 out of 5 stars
Whence friendship?
Verified purchase
An easy to like movie on a very difficult question: how men are to form a friendship when everybody is terrified of being labeled a--well, choose your slur. The plot gets off to a bad start: our hero needs a best man but has no real male friends. He does, however, have a brother, whom any etiquette book will inform you to be the first choice for best man. Well, we let that go. Who knows etiquette these days, or how to spell? After various tribulations our hero Peter finds a friend. Unfortunately, at the same moment he turns into a nitwit, speaking dialogue more like baby talk than conversation that might make him credible as an object of friendship. How the friend, Syd, comes to like, indeed to love, such a moron is never explained. But he does. The fiancée becomes jealous, Peter stops being an idiot, Syd is banned from the wedding but attends anyway, even if the fiancée had not invited him at the last minute. For she has recognized that Peter is deeply unhappy despite a fair showing of groomsmen. The title enters the script just as the wedding does in one of the best--actually the best--sequence of the film, as Peter and Sydney run through all the foolish nicknames that Peter has cooked up for Syd, after Syd, shortly after the two meet, has hit the bull's eye with his first choice for Peter. Well acted by all concerned, with special praise for Paul Rudd, who trips over his tongue hundreds of times like a champion.
6 people found this helpful

teols2016Reviewed in the United States on June 26, 2014
4.0 out of 5 stars
I Don't Love You...
Verified purchase
...but I like you, film. I like you. This film, portraying a girl-friendly guy's quest to find a best man for his upcoming wedding, was pretty funny. Not "Hangover" funny, but still pretty funny. Paul Rudd and Jason Segel were good together, though there were times when their growing camaraderie seemed somewhat forced. Also, the fiancée, played by Rashida Jones, seemed to just be there so the film would have a fiancée...what was the fiancée's name again? I know wedding movies need a couple (two people) on the verge of marriage. But that does not mean only one of those people is entitled to a real, almost completely flushed-out personality. Rashida Jones kind of got the short end of the stick here. I did enjoy Lou Ferrigno's appearances and wonder how close that performance was to the real thing. I also liked Andy Samberg as the leading man's gay brother...his tips and lines about picking up men were funny. And, of course, J. K. Simmons is just naturally awesome...pretty sure that's the law somewhere. Overall, it's a fun film with a nice spin on all the wedding festivities in comparison to the wedding films that have come before it. Enjoy.
2 people found this helpful

Petersen DonnaReviewed in the United States on May 22, 2021
1.0 out of 5 stars
Made it 10 minutes.
Verified purchase
Lots of vulgarity. Expected a good comedy - it certainly was not. Spoiler: newly engaged couple discussing where they first had sex at the dinner table with parents. Father- discussing older son physical attributes. That's all it took. I was done,
One person found this helpful

B. van DamReviewed in the United States on August 7, 2011
5.0 out of 5 stars
The Best Movie you Never Heard of
Verified purchase
I bought this movie on a whim because I really like Jason Segel (all the way back to his character "Mike" in SLC Punk). He is underrated talent; an intelligent producer/writer with a knack for stories that are fun and funny without appearing to try too hard or being overly sophomoric.

I LOVE YOU MAN is fun and funny and you really get to like the characters. Peter for being a wussified doofus, Sydney for his funny, honest and laid back nature and the rest as well. There are some great awkward moments guaranteed to get a laugh. It is a bit "chick flickish" but more than enough guy stuff to make up for it; a great balance for both sexes.

Not saying this movie will change your life, it is enjoyable; so much that I have watched over and over. This is my "done with the world, need some kick back time, rainy day" movie. Unfortunately they overplayed it by printing inane quotes like "THE FUNNIEST MOVIE OF THE DECADE". Of the decade??!?! No but still one of my top picks.
7 people found this helpful
See all reviews
Back to top
Get to Know Us
Make Money with Us
Amazon Payment Products
Let Us Help You
EnglishChoose a language for shopping. United StatesChoose a country/region for shopping.
© 1996-2022, Amazon.com, Inc. or its affiliates