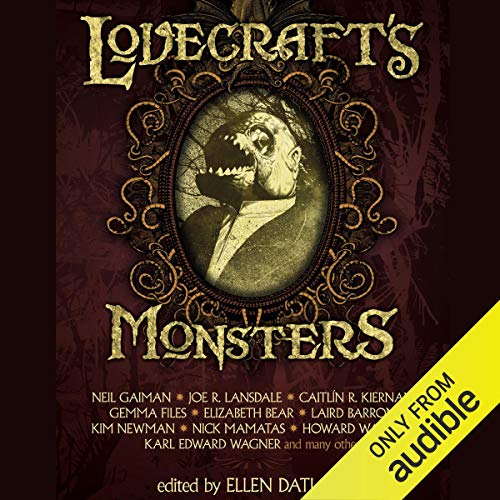 Prepare to meet the wicked progeny of the master of modern horror. In Lovecraft's Monsters, H. P. Lovecraft's most famous creations--Cthulhu, Shoggoths, Deep Ones, Elder Things, Yog-Sothoth, and more--appear in all their terrifying glory. Each story is a gripping new take on a classic Lovecraftian creature.

Legions of Lovecraft fans continue to visit his bizarre landscapes and encounter his unrelenting monsters. Now join them in their journey...if you dare.

Your audiobook is waiting!
Learn more about membership
List Price: $29.95
You Save: $12.96 (43%)
By completing your purchase, you agree to Audible’s Conditions Of Use
Sold and delivered by Audible, an Amazon company

Josh Mauthe
4.0 out of 5 stars A fun anthology that brings a lot more variety and imagination to the table than you might expect
Reviewed in the United States 🇺🇸 on October 10, 2016
Verified Purchase
Any serious fan of horror probably has some connection to the works of H.P. Lovecraft. Maybe more than any horror writer other than Edgar Allan Poe, Lovecraft has influenced just about every major horror author alive. With his weird mythos, his alien worlds, his unutterable horrors just beyond the realms of sanity, Lovecraft wrote horror like no one else, for better or for worse. And you’d be hard pressed to find a serious craftsman in the genre today who hasn’t tried their hand at an homage to Lovecraft’s work. And by and large, while there are some good ones out there (Laird Barron has done some remarkable ones, for instance, and the remarkable and hilarious Freaksome Tales by William Rosencrans does a fantastic, clever pastiche with tongue firmly in cheek), many just feel like pale retreads or weak imitations.

All of which gets to why Lovecraft’s Monsters is such a solid collection. Rather than filling a collection with writers imitating Lovecraft’s (often overwrought) prose, editor Ellen Datlow chooses selections that play off of Lovecraft’s mythos and works, finding something new to do with the material while still staying true to the spirit of it all. For instance, Neil Gaiman’s “Only the End of the World Again” drops a werewolf in the middle of Lovecraft’s isolated Innsmouth, and lets him get caught up by the machinations of a local Elder God cult. “The Same Deep Waters as You, by Brian Hodge, takes on Innsmouth as well, but does so through the eyes of a government agency that’s been monitoring the town’s inhabitants for a long time. (And man, does this one take an appropriately nasty turn right at the end.) The aforementioned Laird Barron, meanwhile, brings Lovecraft to the Pinkerton era, turning in a nasty little yarn in “Bulldozer.” And Joe Lansdale brings his usual style and drawling slang to bear in the nightmarish tale of a blues musician who’s struck one seriously Faustian bargain in “The Bleeding Shadow.”

Not every story works, of course. Kim Newman’s “A Quarter to Three” basically uses a Lovecraft setting as a shaggy-dog joke with a groaner of a punchline. Caitlin R. Kiernan’s “Love is Forbidden, We Croak and Howl” feels like the first act of something larger, and leaves you feeling like you’re missing something; the same, honestly, could be said about Steve Rasnic Tem’s “Waiting at the Crossroads Motel.” Fred Chappell’s ambitious post-apocalyptic “Remnants” has some neat ideas, but ultimately suffers from weak writing and worse dialogue. And the poetry selections all feel pretty thrown in – not bad, per se, but pretty forgettable.

And, of course, there are the outliers, which are pretty good stories, even if they don’t quite feel like they fit into the anthology. Howard Waldrop and Steven Utley’s “Black as the Pit, from Pole to Pole” is equal parts sequel to Frankenstein, Jules Verne tribute, literary alternate history, and adventure story, and while I’m not sure that it quite fits the theme, it’s certainly a wild ride. John Langan’s “Children of the Fang,” meanwhile, is a fantastic story of family ties, guilt, and shadowy evil, and while there’s a bit more Lovecraft to it, it still feels more like its own thing. And William Browning Spencer’s “The Dappled Thing” presents a steampunk jungle adventure that turns into horror only towards the end. None of them are bad – indeed, all three are among the most interesting, engaging stories – but they all feel a bit “off-topic,” for lack of a better term.

All in all, it’s a satisfying, fun anthology, and one that’s more varied and wide-ranging than you might expect given the Lovecraft theme. Sure, there are some hits and misses, but that’s the name of the game when you read anthologies. And while few of these quite manage to be all out great, there are none that are truly bad on the whole, and a lot that are pretty fun and enjoyable. And as a fan of horror, creativity, and Lovecraft, I found a whole lot to enjoy here.
Read more
32 people found this helpful
Helpful
Report abuse

Rory Coker
5.0 out of 5 stars What a great anthology!
Reviewed in the United States 🇺🇸 on November 4, 2021
Verified Purchase
Here is a generous selection of short and not-so-short fiction by a wide range of accomplished authors. The overall theme of the anthology is represented by the presence in each story of Lovecraftian monstrosities. None of the stories are pastiches of Lovecraft; each has its own characteristic literary style and setting. I was delighted all the way through. Fritz Leiber famously said of Lovecraft that he was "a literary Copernicus." Lovecraft almost single-handed turned supernatural horror fiction, which was in a boring and hackneyed folkloreish rut, into a kind of cosmic horror fiction. Superstition was replaced by science fiction. Everyone will have his or her own favorite tale here. Mine is "Black as the Pit from Pole to Pole," which places Mary Shelley's Monster into an interior world that blends creations of John Cleves Symmes Jr., Herman Melville, Lovecraft, Poe, and a number of others! I recommend this anthology very highly.
Read more
Helpful
Report abuse

Kate M.
3.0 out of 5 stars Some gems and some dross
Reviewed in the United States 🇺🇸 on April 29, 2019
Verified Purchase
As with all anthologies, some of the stories are good, and some of them are godawful. This anthology had fewer gems than usual, though, hence the three-star rating. This anthology contains:

Only the End of the World Again - Neil Gaiman - This was one of the better stories. Werewolf/Innsmouth mythos. 4 stars.

Bulldozer - Laird Barron - This was very good. I don't know the "origin" story from Lovecraft, but this was gritty and scary and I really liked it. 4.5 stars.

The Same Deep Waters as You - Brian Hodge - This was really interesting and I liked it, for the most part. The characters were unique in my experience. Another stupid nonsensical ending, though. 3 stars.

A Quarter to Three - Kim Newman - A little dialogue heavy for my taste, and not my favorite. 2 stars.

Inelastic Collisions - Super weird but still fascinating. One of a couple I wish had been longer. 4 stars.

Love is Forbidden, We Croak and Howl - Caitlin R. Kiernan - The other story in this collection I wish were longer. Very, very brief and left me wanting to know more. 4 stars.

The Sect of the Idiot - I don't even know what the heck this was about, but the language was so overwritten it made me feel like an idiot. Just...boring. 2 stars.

Black as the Pit, from Pole to Pole - Okay this one was something else. Like the bastard fanfiction lovechild of Mary Shelley and Jules Verne. Weird in ways I can't explain, but I did want to know what happened, so there's that I guess. 2.5 stars.

Waiting at the Crossroads Motel - WTF. No. 1 star.

I've Come to Talk with You Again - Karl Edward Wagner - Completely nonsensical and zero plot. Wish I had those ten minutes back. 1 star.

The Bleeding Shadow - Joe R. Lansdale - I loved the "voice" of the narrator, and this one was actually really scary. I liked it. 3 stars.

That of Which We Speak When We Speak of the Unspeakable - As inscrutable as its title, and not in a good way. 1 star.

Haruspicy - Dude. No poetry. We've been over this. No stars.

Children of the Fang - John Langan - One of the best stories in this collection. I'd read a novel length version, if there were one. Worth the slog of some of the others. 4 stars.

Altogether, this was one of my less-beloved collections edited by Ms. Datlow. It could be that I'm just not a lover of Lovecraftian tales, but I don't think so. These were really hit-or-miss.

BumpyConstant
5.0 out of 5 stars An interesting and tasty variety of monster tales
Reviewed in the United Kingdom 🇬🇧 on July 24, 2014
Verified Purchase
As the title says, this is an anthology of stories pivoting around monsters from Lovecraft. The style varies considerably – all sorts of genres are crossed into, including steampunk, sci-fi and western. Some are quite dark and brooding, some action orientated, some quite light, even funny, and some play about with interesting ideas (‘Bulldozer’ a western, and ‘Love is Forbidden’ particularly come to mind).

For the Lovecraft geek in me, it was quite rewarding recognising a monster – it’s not always obvious. I liked the variety of styles and length, as I prefer anthologies to be diverse, though I know that’s not everyone’s cup of tea. A few of the stories are quite short, though I can’t say I disliked their brevity. I prefer a story too short, than thinking ‘how long till the end?’ as I impatiently peek a few pages on.

I’d say if you're not familiar with the Cthulu mythos, this is still an enjoyable and varied read, and might tickle your interest in the world Lovecraft kicked off. If you want something specifically with a ‘Weird Tales’ feel to it, then perhaps this won’t be your thing, though there will be stories you’ll enjoy.

I’m going to give this five stars, because I more than like it, and will read some of the stories again.
Read more
10 people found this helpful
Report abuse

JameyC47
2.0 out of 5 stars Love Lovecraftian goodies, but this, misses sadly
Reviewed in the United Kingdom 🇬🇧 on May 17, 2019
Verified Purchase
Rarely do I skim through stories, rush to the end to find how it ends, but this set of stories had me very bored at times. I gave it two stars as one or two were worth my time. But for the most part I choose a full miss on this item.
Read more
Report abuse