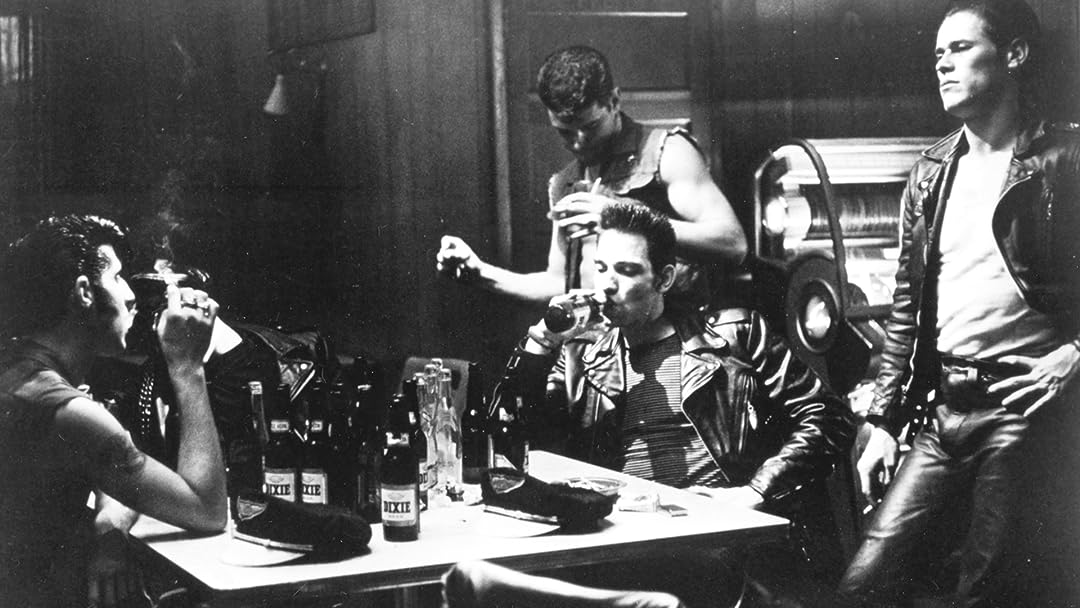 (233)
6.11 h 19 min1984R
Willem Dafoe made his unforgettable movie debut as the leader of a 50s biker gang lost in a world of black leather, bad girls and sudden violence in the independent hit that marked the emergence of one of modern cinemas most important woman directors in this evocative drama co-written and co-directed by Kathryn Bigelow (The Hurt Locker, Point Break) and Monty Montgomery.

CinephiliacReviewed in the United States on June 8, 2006
4.0 out of 5 stars
"Well, I was born overheated. . . beneath a blue/black sky"
Verified purchase
"The Loveless" marked the feature film debut for co-director/co-writer Kathryn Bigelow ("Near Dark," "Blue Steel"). The movie was actually Bigelow's graduate student film thesis--a stylized and downbeat little film with a neo-noirish undercurrent that showed enough promise to prompt a brief art house circuit theatrical release--after which it achieved a cult following overseas and, to a lesser degree, in the U.S.

Willem Dafoe exudes a surly raw sexuality in his first credited screen role as 'Vance,' a rough and tumble biker traveling the back roads of America with his gang during the 1950's. Vance establishes the duality of his character in the very first scene of the film: He is decent enough to come to the assistance of a lone woman driving along a deserted stretch of road by changing out her flat tire. However, when the woman offers Vance a grudging pittance for his time and trouble, he doesn't hesitate to reach through the car window, grab her purse and rifle through her wallet until he pulls out a more satisfactory sum. He then proceeds to plant a groping kiss on her as a bonus. How you react to this scene is probably a good indication of whether or not you will enjoy this movie. It is pretty over the top.

Vance and his motorcycle gang are on their way to Daytona Beach for the races when one of their motorcycles breaks down--forcing them to spend the day at a little out-of-the-way garage and cafe off U.S. Highway 17 until they complete the repairs. The locals are a mixture of the curious and the openly hostile. The movie tends to drift along rather aimlessly through the first two-thirds of the movie, and then it suddenly takes a rather dark turn, picking up momentum and interest after the introduction of a disturbingly pre-pubescent looking Sportster Debbie (Tina L'Hotsky), a wild child with an instant interest in Vance. Following close behind is Debbie's psychopathic and degenerate father, Tarver (J. Don Ferguson), precipitating a violent showdown with Vance and his gang.

The film was intentionally designed to look like a low budget 1970's biker film (a la Roger Corman), but it manages to transcend the genre. Dafoe does not always look completely comfortable in his first role. He does, however, demonstrate a real screen presence and visually commands whatever scene he is in. (Some of the other actors are not so lucky.)

Most of the sexuality in the film is implied rather than explicit (with two rather brief and slightly creepy sex scenes), and there is a surprising lack of profanity. The dialogue is rather stylized--with a great deal of period slang. Be advised, there is substantial "dead air" time (no one talking). Co-director Monty Montgomery wanted a Sergio Leone ("Once Upon a Time in the West") feel to the film--with the day drifting along in "real time." The camera often focuses on the scenery, watching the actors performing mundane tasks, and spends a lot of time on close-ups of the tattoos on the bikers' anatomy, wardrobe details and the period-authentic motorcycles. This is accompanied by a great deal of male posing and preening, giving the film a sensibility that is closer to Kenneth Anger's homoerotic "Scorpio Rising" than Marlon Brando's "The Wild One."

The cinematography and scorching soundtrack alone are worth the price of the DVD. The music features rockabilly icon Robert Gordon (who also has a small role in the film), John Lurie, and a brilliant but un-credited film score from Eddie Dixon. This is augmented by `50's standards from sultry Brenda Lee and Little Richard playing on the jukebox. (The title line of this review is taken from Gordon's opening credits song.)

Substance may take a back burner to this film's lush and gorgeous style with its `50's mixture of vintage motorcycles, black leather, ducktail haircuts, poodle skirts, roadside diners with Wurlitzer jukeboxes, ribbons of endless highway and, of course, bad boy bikers. "The Loveless" isn't just for gear heads and biker culture enthusiasts. The film had the odd effect of making me feel really nostalgic for a time I didn't live through.

Extras include a blended commentary track with Kathryn Bigelow, Willem Dafoe and Monty Montgomery; a gallery of still photos; the original posters for the film; the theatrical trailer and scene selection.

Michael DewReviewed in the United States on August 22, 2022
5.0 out of 5 stars
Awesome
Verified purchase
Dig it.

TommyReviewed in the United States on June 1, 2022
3.0 out of 5 stars
The Loveless is a 1950's dime store novel brought to life.
Verified purchase
PLOT: A small group of bikers converge at a motel and a diner in Georgia, spending a lot of time smoking cigarettes, working on their bikes and drinking cheap liquor.
Not a lot happens in The Loveless, but the sets, vehicles, props, music and wardrobe are very authentic 1950's. This film definitely captures the vibe of the 1950's, but don't expect any action or dramatic storytelling.
I enjoyed watching a young Willem Dafoe show off his early acting chops and spotting the different cigarette brands (Salem, Lucky Strikes, Chesterfields) was fun as well.
This movie unfolds like a cheap paperback novel from the 50's, and I appreciate that. It's like the anti-American Graffiti (a movie that I adore).
If you like Rockabilly, the 1950's, classic Harley's, black leather, chain-smoking, vintage cars or waitresses pouring coffee, give The Loveless a look, Daddy-O.
One person found this helpful

SBC78132Reviewed in the United States on June 22, 2020
5.0 out of 5 stars
1981 Accurately Captured what remained of the late 50s!
Verified purchase
This was filmed about 1981 when you could possibly still capture remnants of the late 50s in near authenticity. The authenticity of the sets, cars, props, bikes, and even firearms shows an amazing attention to detail for the first serious effort by Dafoe, Bigelow, and Montgomery. The sound track was relevant and also capture the era. So, given an attention to detail that pervades the entirety of the rest of the movie, it is essential to ask why the characters were presented as they were! Well, they were like their peers of the era may have been posing in a world of late 50s rigidity. Some of the quotes that show the emotional stress they were under are subtle. But here are three that make this five stars: 1. Telena pointing out "He didn't do anything to me you haven't." 2. Telena again not comfortable with certain liquor stores and very much held to rigidity that she could not embrace. and 3. Vance tells us where this is going right at the beginning: "Man, I was what you call... ragged. I mean, way beyond torn up. I wasn't gonna be no man's friend today. Been out of storage for about a year now. And to me, this endless blacktop is my sweet eternity. I knew I was going to Hell in a breadbasket." AND absent the changes afoot in the country at the time, it would have been as desolate an ending for our nation stuck in that era of prosperity on on side and social rigidity on the other. So yes, The Loveless makes an amazing mark in cinematic history for more reasons than who it introduces. And, if you need one last reason to catch the total disparity between how people present on one side and are underneath watch for Augusta the proper waitresses' little strip tease near the end in the nightclub. Monty Montgomery went on to work with David Lynch quite closely after this movie and now I understand the background inspiration for some of the dark underbelly they showed so well in their joint efforts. Watch "The Loveless" with an eye for subtle details and the era of prosperity, conflict, image and transition it captures is amazing.
6 people found this helpful

PristineReviewed in the United States on April 28, 2008
5.0 out of 5 stars
A Motorcycle Film with Realism, Exlpoitation and Objectification All in One!
Verified purchase
Kathryn Bigelow (who went on to do a New Order video, Blue Steel and Strange Days) made this movie when studying in NYC as a film student. This movie truly captures many aspects of a interstate motorcycle run. There will be inevitable prejudism from the locals, especially men who feel threatened, and then there will be girls who think it's cool. There's a lot of waiting around to hook up with your group (or gang), it's dirty, and most accurately, Harley Davidsons are known to break down. (That's why so many people carry them on their pickup trucks).

Forget about Captain America and Easy Rider. That's the romantic notion that everyone seems to think of when they talk about motorcycle movies. Think Danny Lyon instead. I rode from NYC to California and back with a friend, and we get together every year or so to watch this movie and laugh at Wilem DaFoe's lines. We both agree that this movie really captures the less glamorous side of going cross country on our sleds.

You also have to have watched the exploitation flicks and Roughies of the 60s to grasp the oeuvre that Bigelow is going for. Though the actors look way better than your average hog biker, they don't quite act, they just "go" through the movie. Of course, with a cast like Rockabilly star Robert Gordon (whom I have seen perform in NYC at his height), DaFoe, and a motley cast of dirty bikers, you are guaranteed an unpolished performance.

Also the turning of the tables in sexual objectification is a welcomed change, as men get ogled by the camera lens throughout the movie, as the view linger leisurely on their body parts, wearing fetishtically tight motorocycle leather gear, refusing to budge...making us become aware of what mainstream cinema has been doing for so many decades to women.
21 people found this helpful

John D. PrideReviewed in the United States on September 15, 2021
5.0 out of 5 stars
"We're Going To Daytona...To Watch 'Em Howl."
Verified purchase
A friend of mine recommended this film to me, back in the 80s. I was instantly mesmerized at the utter cool of it. The amazing Kathryn Bigelow quasi-updates Marlon Brando's "The Wild One" with rock and roll royalty like Robert Gordon. The vibe is Jim Jarmusch hip. I've seen the DVD a dozen times and cannot wait for this Blu-Ray to arrive.

Patricia ShaddonReviewed in the United States on June 17, 2021
4.0 out of 5 stars
This is subbed, not dubbed.
Verified purchase
Love the quality, wish it came with an English version. This dvd set is only in subtitles with Japanese voice actors.

Peter SouthReviewed in the United States on July 21, 2020
4.0 out of 5 stars
awesome!
Verified purchase
This was a super good movie - really awesome that it is available for free with amazon prime. Dafoe had a great performance. It's neat to see the biker and small town culture from the time period in the movie. You can also see Dafoe's butt in the movie if anyone interested in that.
See all reviews
Back to top
Get to Know Us
Make Money with Us
Amazon Payment Products
Let Us Help You
EnglishChoose a language for shopping. United StatesChoose a country/region for shopping.
© 1996-2022, Amazon.com, Inc. or its affiliates