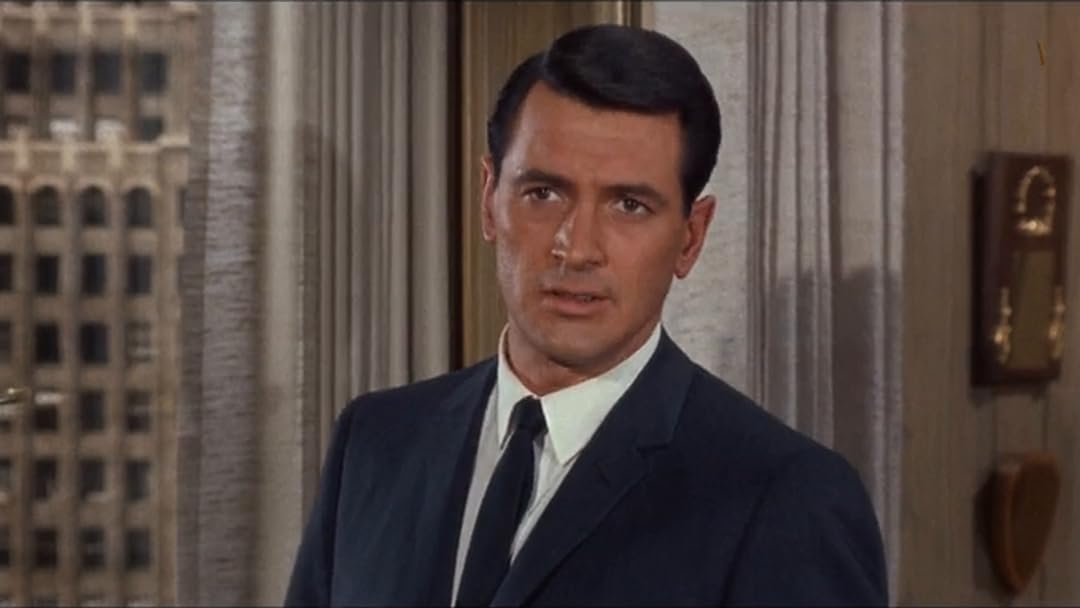 (1,365)7.21 h 47 min1961ALL
All is fair in love and advertising in this delightful romantic comedy of errors starring Rock Hudson and Doris Day as two rival ad executives after the same client.

johnfReviewed in the United States on September 1, 2019
4.0 out of 5 stars
Funny follow-Up to "Pillow Talk".
Verified purchase
What does a studio do when it makes a movie like “Pillow Talk” which becomes one of the biggest, most talked about films in years, a genuine sensation, has a major influence in women’s styles and boosts the careers of its stars, Doris Day and Rock Hudson? Nowadays they’d plan three more installments (if they hadn’t already). But sequels were very rare back then, at least within the world of quality films. But it had made almost five times the gross of a typical hit film and Hollywood couldn’t help but notice money like that. They had hit onto something big and at least they knew it was somehow in the charisma of their two big stars.

“Lover Come Back” was a sequel in spirit rather than literally, as the characters’ names and professions are changed. It even had the same screenwriter, Stanley Shapiro. This time Day (as Carol Templeton) and Hudson (as Jerry Webster) are both in the world of Madison Avenue advertising. And once again Hudson works for Tony Randall (as Pete Ramsey). Randall was an important part of these films as well, providing comic commentary and situations. Templeton loathes Webster for getting big contracts by using booze and women to entertain prospective clients, and Webster himself is no stranger to a wild bachelors’ life. A case of mistaken identity brings Templeton and Webster together and the expected complications ensue.

It’s clear that Universal didn’t want to mess with things too much, but in this case everything still works and works well. It didn’t have quite the titillation value of “Pillow Talk”, which was amazingly sexy and sophisticated for 1959. After all, over two years had gone by and times and mores were changing fast in the sixties. But still they produced a funny comedy that can stand on its own while giving the public what they wanted to see in the clash and eventual change of heart between the two main characters. (The title, however, has always eluded me. Did any lover go away in the first place?)

The whole cast sparkles. It’s important that Day’s character in both films is a successful businesswoman, independent and fully the equal of Hudson’s character. She’s not husband-hunting or dependent on a man for income and this gives her the position she needs to tell him off when it’s necessary. In this film, Jerry Webster is a much less likeable character than Brad Allen in “Pillow Talk”. Allen was just a womanizer while Webster is lying and conniving. Randall’s Pete Ramsey is an incompetent and insecure son of an old fashioned tycoon who has inherited the business. He stays away from the office so much that many of the employees don’t know who he is when he actually shows up.

There are nice turns by Edie Adams as Rebel Davis, a model, stripper and party girl who becomes central to the plot. Jack Oakie does a funny bit as a southern business client whose glass is always ready for “Just a tetch” of liquor. The film is a small feast for fans of mid-century television. Joe Flynn appears in a small role just before he became Captain Binghamton in“McHale’s Navy”. Similarly, Ramsey’s secretary is played by Donna Douglas who would also take off that fall in “The Beverly Hillbillies” as daughter, Elly Mae. Carol Templeton’s secretary is played by Ann B. Davis, known then as having played Schultzy on the ‘Bob Cummings Show” in the fifties and who would later be Alice on “The Brady Bunch”. Jack Albertson is one of a pair of men who keep running into Jerry Webster in a running joke.

Set once again in Manhattan, the film is full of glamorous offices and apartments that are full of early sixties style and color. Day’s outfits were a big part of “Pillow Talk” and even influenced fashion. Here her clothes are by Irene (Lentz) rather than Jean Louis and are equally glamorous.The script is witty and fun with lines like,
Jerry Webster: “Okay, so I’ve sown a few wild oats!”
Carol Templeton: “A few? You could qualify for a farm loan!”

The similarity to “Pillow Talk” is not a problem here. People wanted to see these two well-developed personas do battle again. There is only one split-screen moment, which was wise. That was the first film’s trick and the single reference works as an acknowledgement; any more would have been too many. The ending, coming as it does rather abruptly and as a result of an accidental occurrence, is the film’s only weak spot. I never had the feeling that they had really fallen in love. But “Lover Come Back” is a solid installment of the Day/Hudson films and any fan will not want to miss it.

Elaine S. PlatzerReviewed in the United States on May 12, 2020
5.0 out of 5 stars
VERY FUNNY AND CLEVER
Verified purchase
This movie is so well-written and acted. Whenever I feel slightly depressed I watch the honeymoon motel scene from Lover Come Back and it always makes me laugh. Funny detail from that scene: they're wearing the identical pajamas, although, of course, he has the bottoms and she has the top.
3 people found this helpful

Chris330rReviewed in the United States on August 13, 2018
2.0 out of 5 stars
Ok movie until the final 10 minutes
Verified purchase
I loved "Pillow Talk" but not this one. Without spoiling the ending, all i'll say is that it's disgusting, especially for the era it's made in. After all the deceit and manipulations by Rock Hudson's character to Doris Day's character throughout the film, what transpires in the final 10 minutes is not only unrealistic and incredible, but vulgar and gross. It doesn't even fit in with the previous 90 minutes that came before it. Those last few minutes completely ruins the entire film for me and i'll re-watch Pillow Talk 100 times before ever seeing this again.
2 people found this helpful

DonReviewed in the United States on June 1, 2021
5.0 out of 5 stars
LOVE THE OLD MOVIES
Verified purchase
I’m a fan of Doris Day, Cary Grant, Gene Kelly, Danny Kaye as well as other well known actors of the 1950’s - 1980’s. It was a different time 70 years ago but very entertaining without the senseless violence and bad language of today’s which seem to revolve around constant “action”
One person found this helpful

K. CrawfordReviewed in the United States on December 27, 2019
5.0 out of 5 stars
Doris Day is beautiful
Verified purchase
I want a mint that is pure alcohol and comes in pretty paper. I want a gorgeous man trying to trick me into sex. Well, at least I saw it in a movie.
4 people found this helpful

PhotoscribeReviewed in the United States on March 24, 2002
4.0 out of 5 stars
One of Do-Do's Funniest....
Verified purchase
This movie was one of a slew of Doris Day's movies that I saw back in the early sixties,beginning with "Pillow Talk" and ending with "Send Me No Flowers". Thank GAWD I never saw any of the ones she did with Rod Taylor back then! Whoever put HIM together with HER had a screw loose! Anyway, to get back to this film, this is definitely one of Day's most slapstick movies, with a heavy accent on commercial satire.
This film was done in the classic style of romantic comedies back then....lots of cameos and supporting roles for actors familiar to movie audiences from TV, ("Schulze" from "Love that Bob" who was also "Alice" from "The Brady Bunch", Edie Adams, Jack Krutschen,) glitzy, technicolor cinematography, and a state of the art new car for the leading man. It's the usual Doris/Rock formula....Rock is the unrepentant bachelor with the little black book from [heck]; Doris is the virtuous working woman in the same field that ends up resenting him through some early negative confrontation in the movie. The writers usualy engineer their amorous encounters by keeping Rock's actual VISUAL identity a secret...Doris usually hates him sight unseen through phone contact or rumor, but they rely on Rock's charm to deceive Do-Do into ALMOST doing the deed with him, with her discovering the subterfuge only at the last minute.
I'm not giving away any major plot points here, that's the way it was with ALL the Doris/Rock movies....she was always MARRIED to Jim Garner! Anyway...the film is hilarious, has Tony Randall, for ONCE, not playing a priss, and it has GREAT sight gags! If you're a fan of either Doris or want to see a ronantic comedy like they don't make anymore, first rent this movie, then buy, because I guarantee the whole family's going to love it!
7 people found this helpful

Valerie PetersReviewed in the United States on August 10, 2015
5.0 out of 5 stars
I LOVE LOVE LOVE Doris Day
Verified purchase
When the complexity, violence and injustice in the world start to weigh me down, I escape back through time to watch any Doris Day movie I can get my hands on. Like Audrey Hepburn, Doris was a truly luminous soul and it had nothing to do with the Hollywood makeup department. Very few actors in the entertainment industry today are able to just simply bring happiness to people by watching their work. Lover Come Back has ok dialogue that could have been much sharper and bolder, but Rock and Doris were able transform the silliest scripts into a high level of amusement and fun with their fantastic chemistry. In fact, Doris brought out the very best in anyone she worked with. Just a fabulous lady.
7 people found this helpful

LeeReviewed in the United States on April 6, 2020
1.0 out of 5 stars
Great Movie, unfortunately captions are not available!
Verified purchase
Screwed up, I have a hearing problem .. This is movie, unlike most, does not have captions available. Should of read the fine print before I bought it.
See all reviews
Back to top
Get to Know Us
Make Money with Us
Amazon Payment Products
Let Us Help You
EnglishChoose a language for shopping. United StatesChoose a country/region for shopping.
© 1996-2021, Amazon.com, Inc. or its affiliates