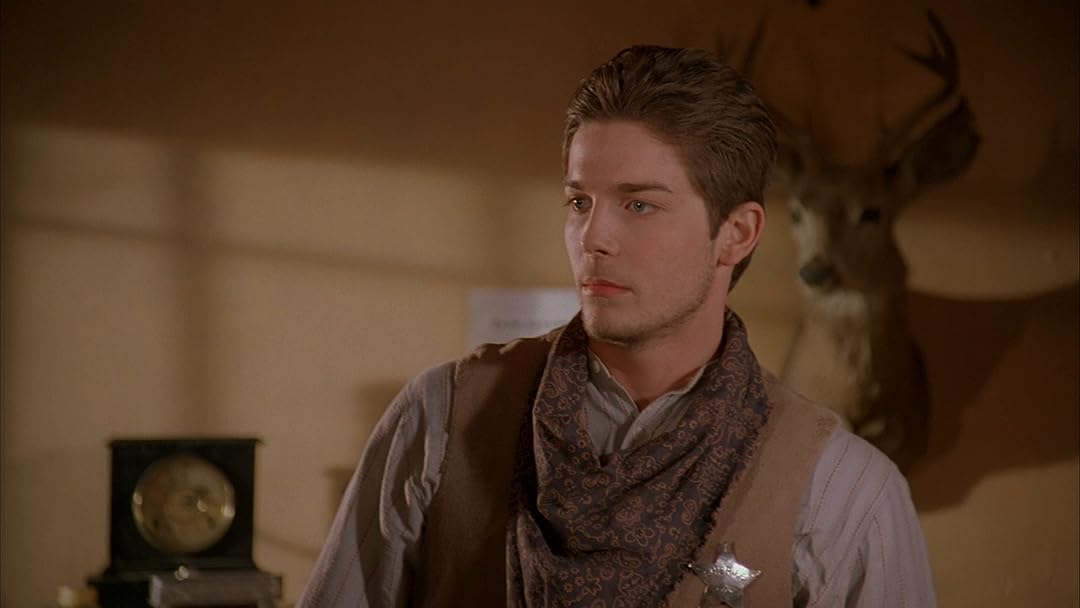 (405)
7.01 h 26 min2010G
Erin Cottrell, Dale Midkiff, Logan Bartholomew, Frank McRae. After settling in their home, Missie and Willie’s lives are thrown into turmoil when, during a visit from Missie’s father, tragedy strikes which proves to be their greatest emotional challenge yet. Closed-captioned.

Butterflymom54Reviewed in the United States on February 17, 2021
5.0 out of 5 stars
Always a great story
Verified purchase
This movie in the series starts with the elation of a visit from Pa. Then moves into a sad occasion. As Missy and Willie face hardship and loss we see a loving and devoted Father attempt to bring his beloved daughter back from despair. Also a devious plan is hatched to hurt several people in town and the LaHayes are not spared. Willie begins a new position to serve his families needs but with an underhanded plan for the Mayor to use Willie. This one is full of suspense. Ends very well. Enjoy!! :)

M. PalmerReviewed in the United States on January 5, 2014
5.0 out of 5 stars
Missy and Willie
Verified purchase
Clark comes out West to visit Missy and Willie. Their reunion is joyous as he meets his two grandsons (one adopted) and granddaughter. Missie has returned to teaching since they've had a couple of hard years. Everything seems to be going great...

Until her baby dies. We watch both Missie and Willie struggle over this death. Clark struggles watching his daughter in a deep depression and trying to find a way to restore her. Willie takes a job as sheriff, but the town mayor isn't a nice guy and things don't go as planned at all!

When watching these, I have to keep the movies separated from the books. At this point, there's very little true between the two. Nothing could ever take place of Janette Oke's books!

2far@prodigy.netReviewed in the United States on April 19, 2007
5.0 out of 5 stars
Love's Abiding Joy
Verified purchase
The fourth in a series, Love's Abiding Joy takes the young couple Missie and Willie forward in time on their ranch. The visit of Clark for the first time to see his grandchildren, daughter and son-in-law. During the visit Clark helps the young couple get past the sudden infant death of their baby. The offer of a job as sheriff helps the young couple manage to hang on to their cattle ranch during hard times. The unselfish generocity of Missie, who sells her dresser set and her locket to fend off foreclosure of a neighbors ranch. The movie drags slightly in spots, and does not follow the book. The series has been a welcome addition to my DVD library and was given as a gift to my 79 year old mother who adores the series.
8 people found this helpful

John L. WilliamsReviewed in the United States on July 20, 2009
1.0 out of 5 stars
Love Comes Crashing
Verified purchase
The fourth in the LOVE Series is easily the worst of the four. While Love Comes Softly sets a nice dramatic heartfelt tone with religious undertoes that inspire and move, this episode crashes and burns in nearly every possible aspect of the movie. It is only the competent acting of the film that keeps you at all interested in the melodrama that flows like a burst damn over what should have been a sensitive portrait of loss due to sudden crib death & how it affects a family.
As a member of a family who lost an child to this, I find this portrait insulting and so forcefully RELIGIOUS that it offends. While the hand of God moves and guides one through such a terrible incident in life, to depict it in such a simplistic manner is mind-numbing. It is not in any way shape or form up to the standard set in the earlier episodues of this warm intimate series. While Mr. Landon Sr knew how to tread that thin line between healthfelt/sentiment with a passion and compassion, Mr Landon Jr seems to have oversteped that line and wandered most decidedly in to predictible exploitive melodrama. I only hope the remainer of the series reverts back to the style and grace of the first three films and does not continue into this mauldlin over the top style. When the very same actors who were reserved and illuminating in their roles, perform the same role but with such exaggerated emotions, you know the director is doing a diservice to the work. As the music swells ominously each time the evil rich mayor appears and he executes his insidious deeds on the poor Christian folk, one can feel the swells of not tears but thunderous laughter building with one's gut. Not the intended the reaction especially when dealing issues such as crib death, weather induced poverty and loss of the ability to maintain one's livelihood. In these trying economic times to see such black and white manipulations of situations & characters can only induce laughter and derisive dismissal. What a missed opportunity this episode in the LOVE SERIES is.

LisaReviewed in the United States on February 6, 2007
5.0 out of 5 stars
Finally some descent Family Movies
Verified purchase
There just isn't a lot families can watch together anymore. This series of movies from Janette Oke's book series is something I can sit and watch with my girls and not worry about them seeing anything inappropriate. I wish Hollywood would get away from those reality shows and start making shows like this for TV viewing. I remember being able to watch shows like the Waltons, Little House and such and they were shows the whole family sat down for. I'm glad there are still people out there that put out shows everyone can watch and that have a great positive message.
3 people found this helpful

Roy KingReviewed in the United States on August 14, 2007
4.0 out of 5 stars
A good read for young women - plus movie version
Verified purchase
This is the fourth book in the Love Comes Softly series. I ordered the first three in the series on a hunch that they would be good since they have been made into movies. I ordered these for my 15 year old daughter to read through the summer. I also ordered the DVDs. My daughter is not an avid reader so I had to twist her arm a bit to read these. I am glad they were interesting to her and had good life lessons in them. I would have her read aloud to me and we would discuss what was happening in the story. This was also her first time to see that the book and the movie is often very different. We are still readig the series.
3 people found this helpful

the great admirerReviewed in the United States on November 2, 2010
5.0 out of 5 stars
The Love Series
Verified purchase
I am a great admirer of Janette Oke's series of Love's Long Journey. I have been watching the series ever since they were first introduced to the hallmark channel and now I do not miss them any time it comes on. Each chapter of the series makes you think you are part of the journey and each character makes you feel their love, their pain, and their joy. I recommend this series to any age and any gender. Hooray to Janette Oke, and I am investigating what other series she has available.

B. HuntleyReviewed in the United States on January 24, 2007
5.0 out of 5 stars
wonderfully refreshing
Verified purchase
After having watched all the previous Love Comes Softly movies I was excited about veiwing this one. It was very good. I just wish Dale Midkiff's part had been larger. I would recommend this movie. It is good, inspiring and can be watched with the entire family. After watching these movies we have discussed what happened, how the characters coped and how their relationship with God. Although predictable, it was nonetheless well worth purchasing and is a movie that I know I will watch over and over.
5 people found this helpful
See all reviews
Back to top
Get to Know Us
Make Money with Us
Amazon Payment Products
Let Us Help You
EnglishChoose a language for shopping. United StatesChoose a country/region for shopping.
© 1996-2021, Amazon.com, Inc. or its affiliates