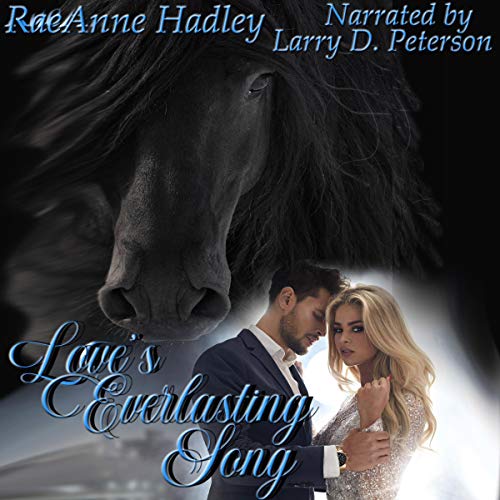 Rebecca Gordon never believed in "happily-ever-after" but she had no idea how far her marriage had crumbled until she walked in on her husband with another woman. Unable to save her marriage, she decides to focus on her career and win the horse show that would put her ranch on the map. Wanting to use the latest, chic music for her competition, she flies to L.A. where she is to meet with the managers of Luke Grayson, one of the hottest singers of the decade.

Luke Grayson is on top of the world and at the top of the charts, but he's growing weary with the "McModels" that are throwing themselves at him. Their selfish, shallow personalities leave him wanting for more. He stumbles across a DVD late one night and becomes entranced with the woman riding her horse to his music. Determined to meet her, he arranges to be a part of that meeting.

The physical attraction between the two is immediate but Rebecca struggles with her pending divorce and need to be successful in her career. As Rebecca begins to open her heart and believe in her future, her past won't leave her alone and threatens to destroy everything she has worked for. Can she fight to put her past to rest and begin a new life, or will this be her swan song?

Your audiobook is waiting!
Learn more about Membership
List Price: $14.95
You Save: $1.96 (13%)
By completing your purchase, you agree to Audible’s Conditions Of Use
Sold and delivered by Audible, an Amazon company

Kathy L
5.0 out of 5 stars Romance with song
Reviewed in the United States on June 1, 2012
Verified Purchase
This is my first book by RaeAnne Hadley. This was a great romance story with a little tragedy. Rebecca Gordon married a man (Kip) and knew before she walked down the isle that he was not her true love but she gave it her best. Rebecca is a dressage rider and she wanted to win the world championship and felt she could do it with a song by Luke Grayson a famous singer. One her way to the airport bound for LA, she stopped at her husband's job and found him in the arms of another women. Deviated, she decided that marriage is over and had to go on to LA for the future of her ranch. She was to meet with the a manager of Luke Grayson but fate had more in store for her. This was a great romance novel along the lines of Pretty Women. RaeAnne had me in tears with her words. Wonderful job! Looking forward to more of her work.
Read more
7 people found this helpful
Helpful
Report abuse

Brenda Romine
5.0 out of 5 stars Brilliant!! Awesome Read!!
Reviewed in the United States on March 23, 2013
Verified Purchase
What an amazing story. I could not put this book down! Thank you ReaAnne for the sleepless night :)

The characters come alive in this tale of love and passion. Rebecca has a passion for her horses and her career. Her husband has a passion for himself.When Rebecca walks in on her husband and another woman things take a turn for her in more ways than she thought possible.She leaves her husbands office to make an appointment with a famous singer to get his contract approval for her to use his song for her up coming championship ride.

Luke Grayson,a singer who sets up the meeting with Rebecca because he intrigued by her and her riding.Luke never expected to fall in love with Rebecca.And that's when the story gets really exciting.

Truly a story worth sharing!! This a great read and I highly recommend this one!!
Read more
One person found this helpful
Helpful
Report abuse

Crellinger
3.0 out of 5 stars A story of love and horses
Reviewed in the United States on November 21, 2013
Verified Purchase
I enjoyed this story. Why 3 stars? Because I found myself getting bored at times and just wanting to rush to the end. I'm not sure what was missing though.

She has showed horses for a long time. After a failed marriage, that turns deadly, she finds a new romance. Someone that will support her. Helping to make all her dreams come true.
Read more
2 people found this helpful
Helpful
Report abuse

Cali Mom
5.0 out of 5 stars Loved this romance/drama
Reviewed in the United States on May 23, 2012
Verified Purchase
I loved this romance/drama. I didn't find it to be a mystery at all. It was truly a romantic story that I couldn't put down. Rebecca, out of desperate need to have someone there, marries an abusive jerk. As the marriage crumbles, (thank goodness), she finds her self-worth and true love. It's a total "Knight Shining Armor" story, but Rebecca is not a helpless victim. I love how the writer made her strong instead of weak and damaged. If you love romance novels, you'll love this, it's a fast romantic drama filled read.
Read more
8 people found this helpful
Helpful
Report abuse

Kindle Customer
5.0 out of 5 stars Great book!!!
Reviewed in the United States on January 15, 2015
Verified Purchase
Wonderful storyline and exceptional characters. This book had it all as far as I was concerned, drama, romance, frustration, betrayal and finally the happy ending the heroine deserved.
Read more
One person found this helpful
Helpful
Report abuse

Arlene R. O'Neil
5.0 out of 5 stars Music on Paper
Reviewed in the United States on March 18, 2012
Verified Purchase
RaeAnne Hadley has an amazing talent to pen words that sound like music. I found it very hard to put this book down as the twists and turns held my attention throughout the entire story. I highly recommend "Love's Everlasting Song." From start to finish, this writer's talent is obvious.Definitely a 5 star read!!
Read more
13 people found this helpful
Helpful
Report abuse

GumboMom
VINE VOICE
5.0 out of 5 stars Great romance. Awesome story.
Reviewed in the United States on March 27, 2013
Verified Purchase
I really enjoyed this book. I really hated Kip because of how he treated Rebecca but love did conquer all in the end. Even though there was a little sex, nothing was graphic. you knew there was physical attraction without getting every detail. Good job, Raeanne. I will look for more books by this author.
Read more
One person found this helpful
Helpful
Report abuse

Christie Silvers
5.0 out of 5 stars A beautiful story!
Reviewed in the United States on August 27, 2013
Verified Purchase
I found this a sweet and fully engaging story. I enjoyed all the horse riding details, even though I know nothing about horse riding. The characters were well developed and loveable. The story flowed so smoothly and kept my interest. I'll definitely be picking up another book by this author.
Read more
One person found this helpful
Helpful
Report abuse
See all reviews

Jan
4.0 out of 5 stars Enjoyable
Reviewed in the United Kingdom on August 23, 2012
Verified Purchase
I like this book it has a good plot, love, a strong heroine and hero, plus drama. I can't ask for much more, I recommend this book if you want a good read.
Read more
One person found this helpful
Report abuse
See all reviews