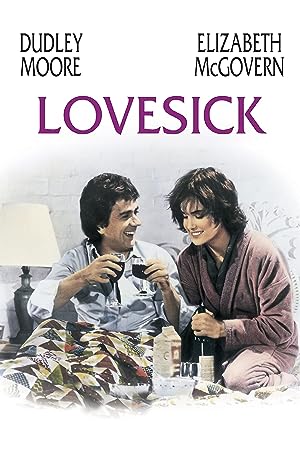 (80)5.21 h 35 min1983PG
Forget about accountants who want to fly, professors whose brains are being zapped by aliens and bored housewives passing the time.

True Friend/TruffautReviewed in the United States on March 4, 2018
5.0 out of 5 stars
The Film belongs to Guinness and McGovern
Verified purchase
Although this film was made during Dudley Moore's brief period pf popularity in the '80s, this charming and fynny comedy about psy choanalysis belongs to its costars: the urbaneSir Alec Guinness and the lovely Elizabeth McGovern. Guinness provides the moments of genuine wit as the ghost of Sigmund Freud. cleverly commenting on the actions ofthe"lovesick" psychiatristMoore, understandably enamoured with his patient , McGovern The humor is low-key and sophisticated,and the film is well-written and directed by Woody Allen collaborator Marshall Brickman Complemented by a lovely original score by Philippe Sarde, LOvesick is a delighful way to spend 95 minutes.

Amazon CustomerReviewed in the United States on December 7, 2017
5.0 out of 5 stars
Watch till the end for Freud's "great lesson".
Verified purchase
I guess it's all a matter of taste. This is one of my all time favorites. Dudley Moore can do no wrong and this movie is packed with incredible actors, including Ron Silver, Alec Guinness, John Huston, Alan King, David Straithairn and many more fine character actors. It is a romantic comedy that reveals both the fundamental frailty of people and their capacity for love. Dudley Moore portrays a psychiatrist with an inventory of funny and poignant patients who turns out to be kind of lost himself. He acquires a new patient who is both beautiful and vulnerable and finds himself hopelessly infatuated. I guess nowadays he would be characterized as a sexual predator but since they turn out to be in love maybe it is OK. There are neither villains nor heroes here, just humans. Alec Guinness is the ghost of Sigmund Freud and Alan King is a senior psychiatrist who is a mentor to Moore's character. This was written and directed by Woody Allen's writing partner on Annie Hall, Manhattan and several other classics, Marshall Brickman.
2 people found this helpful

BrittReviewed in the United States on January 1, 2016
5.0 out of 5 stars
I love this film!
Verified purchase
Saw this for the first time yesterday and it is enchanting! Features a wonderful all star cast (for some of my generation lol). The music/soundtrack is beautiful. Elizabeth McGovern and Dudley Moore are perfectly matched. John Huston does the Walter Huston laugh from The Treasure of The Sierra Madre lol! Great Manhattan locations and cinematography. Don't miss this gem of a film!
3 people found this helpful

Richard J. DAngeloReviewed in the United States on January 13, 2002
5.0 out of 5 stars
A 2 Star movie that rates 5 stars!
Verified purchase
According to Leonard Maltin, this is a 2 star movie. And I can agree with that on most counts. What makes this movie a 5 star film is the special magic it casts upon the viewer - I mean me.
How can you put magic into words? Impossible.
I can only say this...there is a special magic about Moore falling for McGovern. You can see it happening - hell, I could see it on their faces. It's that knock-down-drag-me-out kind of love that defies emotional definition. It has happened to us all - at least I hope it has, for this kind of love is worth experiencing at least once.
What makes this film magical is the fact that it all works out. In real life there are too many variables that inevitably screw everything up. But in this movie, everything worked out perfectly. Only in Hollywood.
I would be greatly remiss if I didn't give special kudos to Peter Gabriel, whose beautiful music perfectly captured the beauty of the scenes. This music worked to enhance the magic still further. I only wish it were on CD! I'm a 56 year old male who still feels a tear when the last scene lifts to a panoramic view of Central Park and the music takes you away.
Last and not least, the actors collected for this enterprise are of noteworthy status...Moore, McGovern, Ron Silver, John Huston, David Strathairn, Alec Guinness, Alan King, Selma Diamond, and my favorite, Wallace Shawn. Quite a cast for a 2 star movie.
If you're not a romantic, you won't have the foggiest notion of what I'm talking about. But then, this movie is not for non-romantic people.
Forget "reality". Just watch this movie and let it take you away!!!!

E. BrownReviewed in the United States on March 23, 2007
5.0 out of 5 stars
Time machine to a better place.
Verified purchase
This movie was fantastic. It was made in a more innocent time before AIDS, stalking laws and all of the scandelous relationships between patients and doctors were plastered all over the media. Hell, there was'nt even such a thing as sexual harrassment back then. I look at the film now and somehow feel sentimental for a period when we did'nt know how dangerous a place the world could be. Blissful ignorence.

Dudley Moore was just one of the all time comedic genius's that will never be duplicated. Practically anything starring him was sure to be a hit, even though overshadowed by Tom Hanks in the end. I especially liked the narritive by the Freud character, it makes the film unique and catches you off guard while being so appropriate and funny. Charming, whistful, clever and enduring, what more is to be said. If you can get past the funny 80's clothes and old cars of the day the film is a real treat, if you are older then it will take you back to a time when life was sweeter and fun was a priority.
4 people found this helpful

Fox 8Reviewed in the United States on January 14, 2019
2.0 out of 5 stars
DISAPPOINTED
Verified purchase
I never thought there would be a Dudley Moore movie I didn't like, but this was the one. I didn't even finish watching it, it was so boring and didn't make any sense. Order "Romantic Comedy", that's one that I really love, very funny.

Nucanse MarieReviewed in the United States on May 30, 2018
3.0 out of 5 stars
I love Dudley Moore
Verified purchase
I love Dudley Moore. Hate to give a low star review, but, wasn't funny. Off sense of humor. The supporting actors didn't give much support . Almost like producers held his acting ability back and wouldn't allow him to be himself. But, good movie for Dudley fans. 🙂

Cara Devona BrownReviewed in the United States on November 10, 2019
5.0 out of 5 stars
Satisfied customer
Verified purchase
I am happy with this item. I received this item when it was expected m. It came in good condition
See all reviews
Back to top
Get to Know Us
Make Money with Us
Amazon Payment Products
Let Us Help You
EnglishChoose a language for shopping. United StatesChoose a country/region for shopping.
© 1996-2021, Amazon.com, Inc. or its affiliates