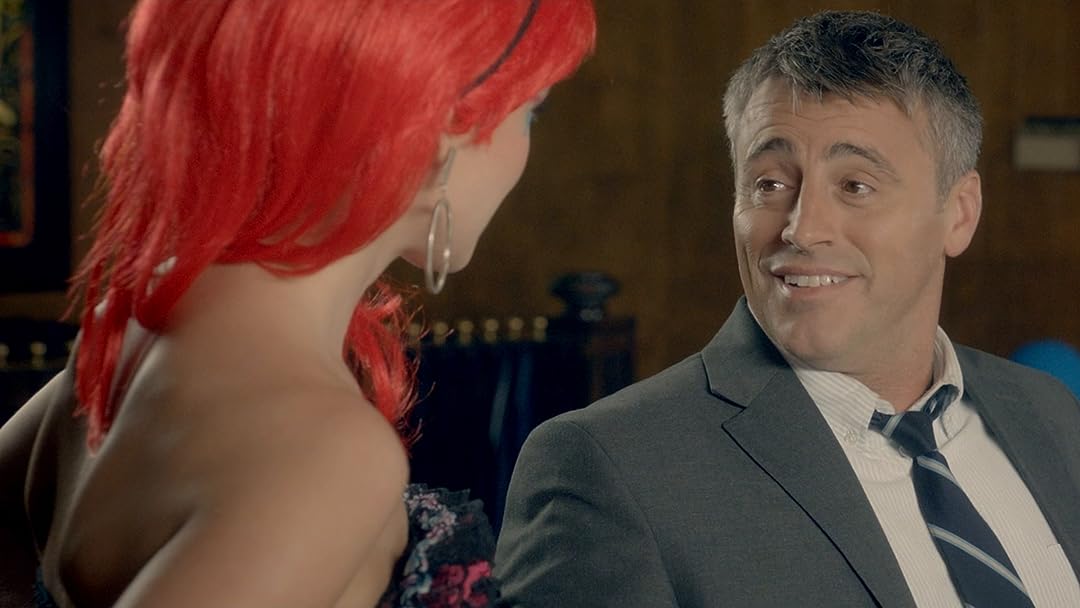 (388)
5.21 h 24 min201416+
Matt LeBlanc stars as an eccentric head teacher who goes clinically insane every time he falls for someone. Romantic comedy with Ali Larter and Chevy Chase.

Ms. Mom L.Reviewed in the United States on October 17, 2017
1.0 out of 5 stars
This Isn't Cute
Verified purchase
This movie has some not-so-bad points. The production quality is ok and there are some smile-worthy moments in the film. It's great to see some diverse characters with strong supporting roles in the film.

But the story, and LeBlanc's one note performance, made this a painful film to get through. The main character here is Charlie, and the filmmakers want you to think of Charlie as a guy who gets a little lovably crazy when he's dating someone. But there's nothing lovable about Charlie's actions in this film. At best he's an obsessive stalker, at worst, abusive and emotionally manipulative. I'm pretty sure if Charlie were a real person, several of his ex-girlfiends would be missing and/or dead by now. It's interesting that no one connected to this film thought there was anything wrong with this character's actions, or how dangerous it is to portray them as something to dismiss or laugh at. Attention girls and ladies, a man who calls your family members to find out where you are, obsessively monitors your online presence, and flies around the country to spy on you is not lovable or cute. He needs a restraining order at the very least and follow-up with a pit bull or martial arts as needed.

L. PerryReviewed in the United States on January 26, 2018
2.0 out of 5 stars
It's boring.
Verified purchase
Meh. Forgetable. Cute enough to play in the background while you're multitasking. Not enough to it to warrant your full attention. LeBlanc is a cutie and can handle better material than he's given, and really all the actors do a fine job with mediocre material. You can sense the script/director reaching for a piece along the lines of Serendipity or When Harry Met Sally, but it falls far short. Thematically, (and it's not a very serious pieces, so this is not a very serious criticism) I have some mild concern that it might suggest one excuse psycho/narcissistic behavior.... But the piece is so silly overall that my concerns that someone would seriously influenced by that are mild. It's silly, but not funny. Sweet, with no chemistry. In the end, all the lost stars are the result of weak script, copycat editing, and just a really dull plot. (I also found the scenes about watching porn completely vile. Tacky, disgusting, and normalizing of an industry that demeans and uses women. And frankly, also poorly scripted.) At the end of the day, the movie's biggest flaw is that it's boring.
One person found this helpful

Melanie M SmithReviewed in the United States on September 19, 2016
2.0 out of 5 stars
Chevy Chase character is offensive and unnecessary to the story line; don't bother with this one.
Verified purchase
Didn't much care for this; the storyline hammered home the "theory" in a very heavy-handed way, so situations that might have been amusing or cute were just over-the-top rammed down your throat. And the character played by Chevy Chase was offensive and unnecessary. In fact, I almost turned off the movie because of it. Turns out it wasn't worth finishing anyway; the outcome is (of course) obvious.
3 people found this helpful

Randall AndersonReviewed in the United States on December 9, 2019
4.0 out of 5 stars
pleasant and entertaining
Verified purchase
It kept me interested, and there was almost no foul language!
2 people found this helpful

Ole' VistaReviewed in the United States on October 14, 2016
3.0 out of 5 stars
but he wasn't all that bad in this role
Verified purchase
Haven't seen Matt LeBlanc in anything for quiet a while,but he wasn't all that bad in this role,although it could've gone to -dare I say it- a younger actor?Since this is a romantic comedy,he seems way too old for Ali Larter's character who's a ballet instructor and looks much younger than her age.Somehow they make it work and manage to have some laughs along the way.
2 people found this helpful

Kelz10Reviewed in the United States on January 28, 2018
4.0 out of 5 stars
Personally I really enjoyed this movie
Verified purchase
Personally I really enjoyed this movie. I had never heard of it before, enjoy both lead characters, so gave it a try. I thought it was very cute, and yes even relatable to a certain extent. It's a movie....they had to be dramatic about it. Upset to see so many negative reviews but I guess it is all about perspective. Super cute in my opinion though. Guess it was just the kind of movie I was in the mood for today.
3 people found this helpful

DSophiaReviewed in the United States on July 1, 2015
5.0 out of 5 stars
Hilarious
Verified purchase
This movie is hilarious, and the fact it has Matt LeBlanc and Chevy Chase as main actors is a plus. Only people who have ever overreacted in a relationship will truly get the humor. The highlight of the movie is when Charlie overuses his power as a principal to get information out of Timmy, freaking hysterical.
5 people found this helpful

Chole CharlesReviewed in the United States on June 25, 2017
3.0 out of 5 stars
not crazy about it.
Verified purchase
its ok.. would i rent again no.. Paranoid man.. typical man.. rent it for the people in your life that are annoying mates then take them to get mentally tested
2 people found this helpful
See all reviews
Back to top
Get to Know Us
Make Money with Us
Amazon Payment Products
Let Us Help You
EnglishChoose a language for shopping. United StatesChoose a country/region for shopping.
© 1996-2021, Amazon.com, Inc. or its affiliates