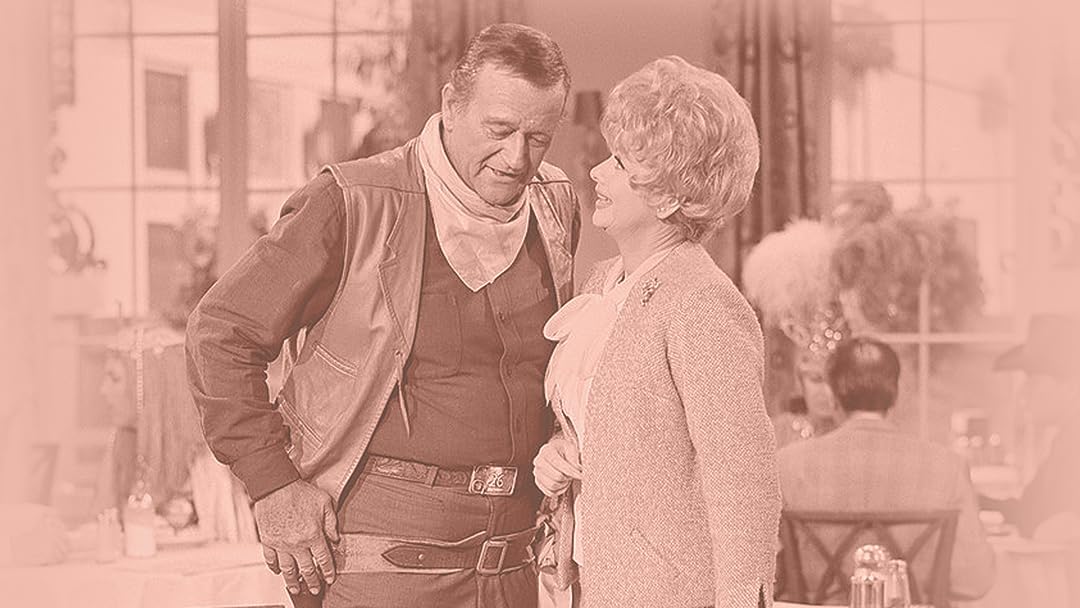 (21)
7.22 h 6 min19997+
The Lucy Show was the 3rd series which Lucille Ball used to dominate the Monday TV line-up on CBS. Like her earlier series, I Love Lucy, it ran six seasons, and stayed in the top 10 in the ratings for its entire run. Enjoy 5 episodes: Lucy gets a roommate (Carol Burnett) - Lucy & Carol in Palm Springs (Carol Burnett) - Lucy meets John Wayne - Lucy with George Burns - Lucy meets the Berles.

NGReviewed in the United States on June 26, 2020
5.0 out of 5 stars
Love Lucille Ball's antics?...watch this show for some simple comedy
Verified purchase
Lucille Ball is one of the best actresses in comedy...Love to see her onscreen displaying her antics of stupidity and she is a treat to just watch, with very good facial expressions.

nycReviewed in the United States on January 19, 2018
4.0 out of 5 stars
Lucy Meets Famous Entertainers: Carol Burnett, John Wayne, George Burns and Milton Berle
Verified purchase
If you love "I Love Lucy" or if you just love Lucille Ball, you will like all her shows including The Lucy Show. The Lucy Show was Lucy's second act after she ended the "I Love Lucy" show and later divorced Desi Arnaz (supposedly she divorced him after he was caught cheating with other women on many occasions). Just like the "I Love Lucy" show (1950s), "The Lucy Show" (1960s) had six seasons just like her third show "Here's Lucy (1970s)," which also ended after six seasons.

In this Vol.1 of The Lucy Show, I watched it through Amazon Prime (not the early VHS version). The VHS reviews don't quite seem to match what I streamed through Amazon Prime. Yes, the episodes were not remastered, so are not of the best quality, but they are the quality of their times in the 1960s. Each episode is a little more than 24 minutes, so each volume of 2 hours and 6 minutes has five episodes. Too bad, these volumes do not have all the episodes of each season. It's mix and match in episodes. In this volume: 1st episode, Lucy looks for a new room mate, and it's Carol Burnett; 2nd episode, Carole Burnette gets Lucy to go with her to Palm Springs to act with their band; 3rd episode, Lucy wants to befriend John Wayne; 4th episode, Lucy is hired by George Burns to do a show; and 5th episode, Lucy moonlights to be Milton Berle's secretary. In all episodes, Lucy meets some of the finest entertainers during that period in America working as a secretary for Mr. Theodore Moony (played by Gale Gordon), a banker.

shellenyReviewed in the United States on August 21, 2017
4.0 out of 5 stars
Nobody does it like Lucy
Verified purchase
Such a great comedic talent! Good episodes!
3 people found this helpful

Byron KollnReviewed in the United States on August 31, 2010
4.0 out of 5 stars
more classic "Lucy" madness
Alpha, the most venerable of all the budget-priced DVD companies, recycles the same old episodes of THE LUCY SHOW that have fallen into public domain limbo. Serious "Lucy" fans have probably purchased these eps over and over again, but the price is right for the casual viewers too.

Five years after the last episode of "I Love Lucy" aired, Lucille Ball was back at CBS, sans Desi Arnaz (whom she had divorced by this point) for another shot at sitcom success. THE LUCY SHOW cast Ball as Lucille Carmichael, a widow who lived with her best friend Vivian Bagley (Vivian Vance) and their respective children in a large house in upstate New York. The show was later re-tooled, with Lucy moving to California to work as a secretary for bank manager Mr. Mooney (Gale Gordon).

"Lucy The Bean Queen" - Lucy tries to raise money for new furniture by buying and returning cans of Bailey's Beans, that have a "double your money back" guarantee.

"Lucy Meets The Law" - After being mistaken for a shoplifter known as "The Red Flash," Lucy is arrested and jailed. Claude Akins and Iris Adrian guest star.

"Lucy Gets Caught Up In The Draft" - A misread draft notice gets Lucy signed up in the Marines, where she becomes her sergeant's biggest headache. Jim Nabors guest stars as Gomer Pyle.

"Lucy Goes To London" - Lucy wins a trip to London after she writes a jingle for a dog food company, but first she must get through a cross-country flight to New York sitting next to Mr. Mooney.

"Lucy And The Submarine" - While trying to get important papers to Mr. Mooney, who's been called up for Naval Reserve duty, Lucy sneaks aboard a submarine about to launch.

F. BehrensReviewed in the United States on October 26, 2000
4.0 out of 5 stars
Not at all bad for the price and lots of laughs
Laserlight showed its first beams in the early days of the CD format when it offered a huge catalogue of classical music for what was then $5 or less. Now it has entered the budget video field and my only sample so far is the 3-tape boxed set called <The Lucy Show> (83 034, 83 035, 83 036). Each tape hold 3 episodes from the 1966-7 season, an introduction by Milton Berle, and a film trailer of one of Lucy's earlier films. What Berle has to say is of mild interest; it is the episodes that make this set worth having.
The first two shows treat us to a young Carol Burnett, whose over the top characterization in the first show makes Lucy the straightman! The incredibly silly plot of the 3rd show brings in Jim Neighbors only during the last minute and he delivers his entrance line over the applause and has to repeat it.
John Wayne plays himself in the 4th show with a more than adequate flair for comedy, while Don Rickles is cast against type (he is a nice person in this one) as an ex-boxer who wants to be a florist. The 6th show brings in Tennessee Earnie Ford and an unbelievable hoe down sequence at the bank. George Burns makes a much funnier guest, especially when he creates with Lucy a wonderful Burns & Allen routine.
Funniest of all is the 8th show in which Lucy becomes Berle's secretary and mistakes a script reading for his marital infidelity--with predictable results. The last show with Frankie Avalon is nowhere as good as the two preceding it.
I am happy that Laserlight uses standard play speed, as all my experience with LP and SLP modes has caused no end of tracking problems and bad pictures. The colors on these prints a little faded in spots and now and then there are those white specks that betray a tape's age. But in general, the video is acceptable, the sound not bad.
A nice little gift package for yourself and then for a friend.
4 people found this helpful

R. M. TelescaReviewed in the United States on December 4, 2010
1.0 out of 5 stars
Don't Bother With Poor Quality Public Domain Episodes/Wait for Official Season Releases by CBS/Paramount Home Entertainment
Don't bother with the public domain episodes of "The Lucy Show." You're throwing away your money. The audio and video quality isn't very good. Buy the official season releases of "The Lucy Show." We already have seasons one through three out. Season four should be out sometime in March 2011. You won't believe the difference between the shabby quality of the public domain episodes and the unbelievable quality of the official releases. It's like they were filmed a month ago. In addition you get great bonus features. So stop buying the same 30 episodes. I was fooled twice and decided to wait for the real thing.
2 people found this helpful

R. M. TelescaReviewed in the United States on December 4, 2010
1.0 out of 5 stars
Don't Bother With Poor Quality Public Domain Episodes/Wait for Official Season Releases by CBS/Paramount Home Entertainment
Don't bother with the public domain episodes of "The Lucy Show." You're throwing away your money. The audio and video quality isn't very good. Buy the official season releases of "The Lucy Show." We already have seasons one through three out. Season four should be out sometime in March 2011. You won't believe the difference between the shabby quality of the public domain episodes and the unbelievable quality of the official releases. It's like they were filmed a month ago. In addition you get great bonus features. So stop buying the same 30 episodes. I was fooled twice and decided to wait for the real thing.
See all reviews
Back to top
Get to Know Us
Make Money with Us
Amazon Payment Products
Let Us Help You
EnglishChoose a language for shopping. United StatesChoose a country/region for shopping.
© 1996-2021, Amazon.com, Inc. or its affiliates