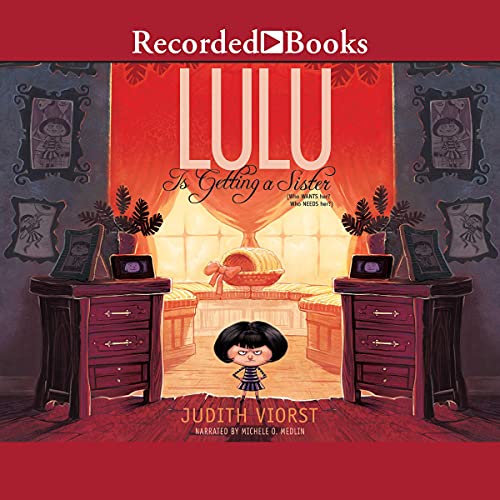 Lulu Is Getting a Sister: Who WANTS Her? Who NEEDS Her?

Lulu is getting the sister she never asked for in this hilarious audiobook filled with hilarious hijinks and feisty twists from Judith Viorst.

Lulu has received the worst. News. Ever. She's getting a baby sister. No one ever asked her opinion on this debacle. But she'll tell you anyway because she no how, no way, no thank you wants a sibling.

Undeterred, to prepare Lulu for big sisterhood, her parents bribe - ahem, ask - Lulu to attend Camp Sisterhood, aka big-sister training camp. As a sister in training (SIT), Lulu is assigned a variety of temporary little "siblings" who are supposed to be so much fun Lulu will become excited to have a permanent sibling of her own.

Well, no one ever said Camp Sisterhood was supposed to teach Lulu how to be a good big sister, so Lulu resolves to be a bad big sister. She insults her little siblings. She taunts them with secrets. She even tricks one of them into carrying both of their backpacks up a mountain!

But no matter what Lulu does, she can't shake the little terrors. Then some BITs (brothers in training) from the neighboring Camp Brotherhood start picking on Lulu's siblings, and Lulu responds by doing her red-faced, steam-coming-out-of-her-ears thing and showing those BITs who's boss!

After all, Lulu's siblings may be duds, but they're her duds, and sisters have to stick together. Besides, in the end, Lulu figures having a little sister probably won't be as bad as a getting a tooth pulled. Probably.

Your audiobook is waiting!
Learn more about membership
List Price: $9.09
You Save: $1.14 (13%)
By completing your purchase, you agree to Audible’s Conditions Of Use
Sold and delivered by Audible, an Amazon company

Josh
4.0 out of 5 stars Good not great
Reviewed in the United States 🇺🇸 on December 19, 2021
Verified Purchase
Good and mostly entertaining story but not great (i.e. child liked it but it was a chore for us to read at times).
Read more
Helpful
Report abuse

MAZY
5.0 out of 5 stars Very cute. Easy read.
Reviewed in the United States 🇺🇸 on October 9, 2021
Verified Purchase
Very cute book for my daughter who just became a big sister. Was easy to read and she enjoyed that it still had pictures (she's 5).
Read more
Helpful
Report abuse

cat
5.0 out of 5 stars Fun to reach with kids!
Reviewed in the United States 🇺🇸 on April 13, 2021
Verified Purchase
Judith Viorst is such a great author! Lulu is so fresh but the books are written so well it’s hilarious!!!
My 8yrs GD & I really enjoy reading all of Lulu’s adventures.
I recommend all of them!
Read more
Helpful
Report abuse

Michy
5.0 out of 5 stars Lulu becomes a Big Sister is a home-run
Reviewed in the United States 🇺🇸 on May 28, 2018
Verified Purchase
What can I say...its Judith Viorst. You can't help but love LuLu and the Authors humor and style. Its.a funny yet sensitive story that will relate well with kids. Real feelings many kids have regarding a new sibling.
Read more
Helpful
Report abuse

IFNLOV
5.0 out of 5 stars Good book for my niece
Reviewed in the United States 🇺🇸 on March 2, 2020
Verified Purchase
Great book she loved it came in great condition
Read more
Helpful
Report abuse

Naomi Desiree
5.0 out of 5 stars Good read with siblings
Reviewed in the United States 🇺🇸 on July 22, 2018
Verified Purchase
My daughter begged me to read this to her from start to finish....almost did it. Great nook to read especially if you have 2 sister's who currently are not getting along.
Read more
Helpful
Report abuse

Lindsey B. Lowe
4.0 out of 5 stars Yay! A New Lulu!
Reviewed in the United States 🇺🇸 on June 19, 2018
Verified Purchase
So excited that there’s a new Lulu book. This one is cute. It’s not as easy of a class read aloud as the other ones but my students still really enjoyed it.
Read more
Helpful
Report abuse
See all reviews