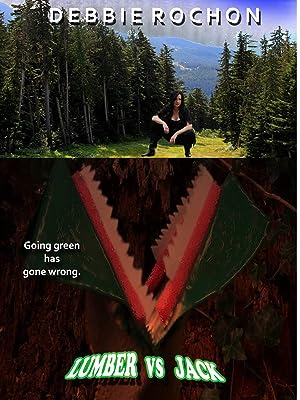 (27)
3.41 h 25 min201413+
Jack Woods must rescue his estranged wife, Jill, from Genetically Modified killer trees. He soon finds himself the leader of a rag tag group of heroes out to save the world from the wildly spreading vegetation in this retro styled sci-fi adventure.

timodonnell The Celtic CriticReviewed in the United States on June 17, 2018
5.0 out of 5 stars
A Funtastic Horror Parody that picks No Sides; & Thankfully, Carries No Politically Correct Message !!!
Verified purchase
Film-Maker JASON LIQUORI has created a whole new Species of Monster with this Environmentally Based Beast Seeking Domination !
The Unlikely Heroes Determined to save Humanity from this new scourge is Lead by Jason Liquori himself, as 'Jack', the Unemployed Nature Loving Divorce' Hunting for his Ex-Wife 'Jill' portrayed Perfectly by DEBBIE ROCHON ! I Love how Ms. Rochon remains in a completely Straight Mode despite the Absurdity all around her ; & She's just one of the Dazzling Beauties fighting for Survival !
Lovely Christina Daoust is 'Sheila', the Doubtful Heroine who, along with 'Jill' helped create the Problem ! MICHELLE PRENEZ is Wonderful as the Alluring 'Michelle' who along with her Best Friend 'Jody' jump from one dilemma into the next . Curvaceous & Ulta-Beauteous JENNIFER WENGER is Brilliant Her Dual Role as 'Jody' & the Bikini-Clad Web-Cam Girl 'Carly' !
The Money Hungry & Compassion-Free Villain in this motley assortment of characters is 'Brad', played with delightful exuberance by BREWIER WELCH; & making her Film Debut is the always appealing XENA LIQUORI as the frightened but bold canine, who needs no Voice-Over !
I'm Now embarking on my quest to watch the Sequel "Jack Vs. Lanterns' with Full Confidence of an Enjoyable Mission !

Avid readerReviewed in the United States on March 3, 2019
3.0 out of 5 stars
Stupidly funny
Verified purchase
There was a fascinating idea buried in this film, and it harkened back to the 1950's B horror movies of nature going on the rampage due to radiation. With decent special effects, a decent script, and competent acting it could have been pretty good. OK, I give a pass to the fact that this was extremely low budget, using friends in various parts. And there were a lot of scenery and time and distance disconnects. In the opening part, with the decapitation, I don't think I have ever seen effects like that, and it was duplicated with some of the severed hands. Where the toy jeep got taken by the vines, that was a laugh and a half. Near the end, when they were fighting in the den, that goes back to the special effects like seen in the Ed Wood movies. And when will film makers realize that shooting a bullet into a gas can will not start a fire. This film is really, really bad but in some ways, stupidly funny. A fascinating idea, but killed by such a low budget attempt.

John CrawfordReviewed in the United States on January 14, 2017
5.0 out of 5 stars
Move over, Michael Bay--this action makes your best movies look like The English Patient
Verified purchase
The special effects in this movie will blow your mind. At times I thought I was watching a snuff film because the people getting killed by trees were real humans. The explosions weren't just staged by a pyrotechnic guru either, they were using legit military grade explosives. If you watch the director's cut version, you'll also find that they didn't even use special effects, they actually found a human killing forest and put together a crack team of soldiers to take out the vile evil trees. It's a must watch. I cannot wait for Jack vs. O'Lantern in the epic sequel.
3 people found this helpful

firgoldReviewed in the United States on September 25, 2016
3.0 out of 5 stars
Did you ever make a middle school film before?
Verified purchase
There are diamonds buried in the rough. This isn't one of them.

I am about 1/3rd in and find myself needing breaks. The story is about as deep as any Troma feature. The actors seem to have been recruited from friends and family. The dialog is bad and at times barely audible. The special effects are right in line with the previous items.

Why 3 stars? I find myself giggling too this film. It reminds me a lot of what a bunch of 3rd to 5th graders might have put their heads together and made as a Green awareness PSA for a class project and afterward their proud parents tried to make it come to life. The complete lack of polish and horrible effects create a somewhat rugged charm.
One person found this helpful

HoppyRooReviewed in the United States on July 5, 2017
1.0 out of 5 stars
Go For It!
Verified purchase
Sorry... this movie is just awful. Not funny. Not scary. Not much of anything... Was this a movie shot as a college senior project or something??? Gah... even if it was, it's bad...

I normally like B - F rate flicks... but this one is SO bad that it probably wouldn't even qualify for the guys who do stuff like MST3K... |

fyi... this is literally the first 1 star I've ever given on any movie to date... and I've watched hundreds...

Starling RobertsReviewed in the United States on August 13, 2016
5.0 out of 5 stars
Fun and twisted!
Verified purchase
What a fun, twisted, campy, romp this movie is! More than once I jumped out of my skin while also laughing. It is clever and there are some fantastic bits of dialogue and dark humor. It was made on a low budget, and that's what gives it charm.
2 people found this helpful

scary-artReviewed in the United States on November 2, 2017
3.0 out of 5 stars
Ed Wood, cardboard monsters, and charm.
Verified purchase
MST3K Worthy, it's a 50's horror picture with the same no budget as flicks like The Horrors of Spider Island or Attack of the Leeches and it's not a lazy attempt making a bad b-movie for the sake of making a bad b-movie, it's actually pretty fun, love the cardboard monsters and costumes and though it's like an Ed Wood killer plant movie, it has some charm.

CustomerReviewed in the United States on January 15, 2017
4.0 out of 5 stars
Truly excellent bad movie experience
Verified purchase
Production values, acting, writing, editing, sound, music all terrible. Wacky, idiotic story. A true cinematic gem.
One person found this helpful
See all reviews
Back to top
Get to Know Us
Make Money with Us
Amazon Payment Products
Let Us Help You
EnglishChoose a language for shopping. United StatesChoose a country/region for shopping.
© 1996-2021, Amazon.com, Inc. or its affiliates