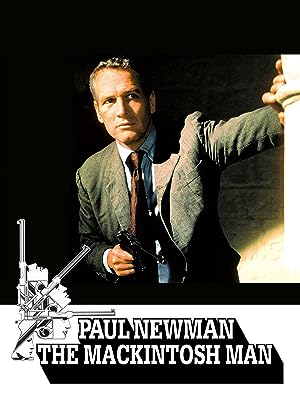 (226)
6.31 h 39 min1973PG
Paul Newman stars as a British intelligence officer sent to jail undercover to catch a gang that has been arranging escapes from prison for wealthy criminals.

TalentseerReviewed in the United States on November 29, 2010
5.0 out of 5 stars
A Boutique Espionage Classic!
Verified purchase
One of my top ten favorite films. I disagree with some other reviews here that Newman is out of his element. I thought Newman was great! I've tried to envision a famous British actor playing Newman's character, and it just won't work. His acting abilities add a lot to the film. I do agree with other reviewers that the British supporting actors are all excellent and worth a look on their own. Yes, the music is perfect. Goodness, gracious, folks! Look what you've got here: a prison breakout, a spectacular Irish mansion, Malta, a beautiful girl, and James Mason and his yacht! It's perfect. What more could you want? I will say, on that Irish mansion, I previously had this movie on VHS and when I put it on pause to freeze the fire sequence, the film shook on the screen so I couldn't tell if the mansion was real or not. What a shame to burn down such a beautiful place, I thought. But in this DVD version, I can freeze it and determined it was not a real place...just built to burn down by the moviemakers. Still, that haunting setting with the house alone on the bog and that music as Newman flees away...really, really great. As for the final ending, hey, folks, it's an espionage movie. You're not supposed to figure it out right away. Think about it and watch it again. It gets better every time I watch it, the sign of a truly great movie. You can feel that Irish air. I love this movie. If you haven't seen it, you need to. One of the great sleepers of all time, straight to you from the golden age of movie-making when the stars were REAL MOVIE STARS. Don't miss this one.
12 people found this helpful

Lawrence Wegeman, Jr.Reviewed in the United States on July 29, 2012
4.0 out of 5 stars
Lively espionage thriller
Verified purchase
Although it could have been more romance, the Mackintosh Man sets Paul Newman against the directing talents of John Huston.

Set in England during the cold war years of the 1970s, the Mackintosh Man (Paul Newman) must match wits with conspirators more interested in taking one of their own from an English prison (Ian Bannen, of Tinker, Tailor, Soldier, Spy) for delivery behind the Iron Curtain. Mackintosh figures Newman into the scheme by getting him sent to prison (for twenty years). This gets Newman in 'right' and he does have the necessary money to pay the Iron Curtain fare, from a notorious jewel robbery. However, he must work to figure something better for assurances sake.

Of great importance is the antagonist, James Mason, a member of Parliament for twenty-five years; powerful, politically popular but exceedingly evil.

Mackintosh's daughter (Dominique Sanda) helps direct Newman through the maze, and both seem in good shape until Mackintosh dies.

The film is partly set in Ireland where John Huston resided for many years. Special features are THE MAN, THE MYTH, THE MOVIE-MAKER, and very interesting.

Wanderer829Reviewed in the United States on February 12, 2010
4.0 out of 5 stars
Don't buy Critic's view
Verified purchase
Don't pay any attention to the critics reviews. This film is not unflawless but it's a good film. How many films are perfect? not too many i think!! So , Like Paul newman in this role as a Undercover Agent who is asked by MacKintosh ( His Boss) to steal Jewels. Well, Newman completes the Heist succesfully but is quickly captured and sent to prison. Eventually as you would expect , he is busted out of prison along with a communist spy who was in jail with him. When newman is taken to his refuge. he finds himself in Ireland. Now this On Location filming in Ireland is brilliant!! the scenery is cold and desolate and eerie. When Newnman escapes from his so called rescuers there is a cool chase with newman burning down a mansion and then running through the hills of Ireland being chased by thugs and a guard dog. the haunting musical score is outstanding. james Mason is a spy who Newman is on the verge of revealing. Dominique sanda is just so - so as Newman's mild love interest and Undercover partner. Not a perfect film by any means but certainly worth watching!! And I bought the DVD !
10 people found this helpful

knorth2Reviewed in the United States on October 2, 2012
4.0 out of 5 stars
Break out the popcorn for another enjoyable spy thriller
Verified purchase
The Mackintosh Man is a reminder that the spy thriller genre gained traction in the '60s and '70s because of some very intriguing movies. This movie brings together a strong script and a stellar cast that includes Paul Newman, James Mason, Dominique Sanda, Ian Bannen and Harry Andrews.

Newman plays an Australian recruited by British Intelligence to find a mole. When you hear him speak, you'll be reminded more of Mel Gibson's accent than the accent of another famous Aussie, Paul Hogan.

Paul Newman's incredible body of work includes classics such as Cat on a Hot Tin Roof, Hud, Cool Hand Luke, The Hustler, Butch Cassidy and the Sundance Kid, and The Color Of Money. He was nominated nine times for an Oscar. This wasn't one of those films but he delivers a memorable performance.

Directed by John Huston, written by Walter Hill, great performance by Paul Newman, James Mason and Dominique Sanda. What more could you want for a thriller?
3 people found this helpful

DuckReviewed in the United States on April 24, 2022
5.0 out of 5 stars
Movie Star Quality Movie
Verified purchase
A great thriller of a movie with a great star, an excellent supporting case and a fast charging story. Watch it to see how great movies were once made.

Mr. QuincyReviewed in the United States on June 24, 2020
5.0 out of 5 stars
Still feels fresh after so many decades
Verified purchase
The early seventies were full of spy/government thrillers, some good, some not. This is one of the good ones. It has a lot of plot twists that don't feel forced, the characters are likeable, and the scenes filmed all over Europe are beautiful. Definitely worth two hour of your time.

L. Kent PorterReviewed in the United States on February 3, 2016
4.0 out of 5 stars
It was my first time trying to find a DVD ...
Verified purchase
It was my first time trying to find a DVD movie via Amazon. It took me a while to figure our that once I had purchased it, I could not only begin playing it via stream, but I would get the DVD via mail as I expected. I ordered it once for mailing, then went back to see if I could play it and all worked ok......but the delay in "seeing" what would happen and my options - were not clear on the ordering screen i 1st used - it went directly to "download" or view now. I was confused, but technology is not my generation
One person found this helpful

CorsoReviewed in the United States on December 15, 2014
4.0 out of 5 stars
A Cracking Good Show
Verified purchase
I say old chap, here we have a good solid British counter-intelligence film with a solid performance by all. Well written to keep us in the dark as it slowly unfolds all the way to the end. An superb car chase through the Irish countryside and truly thrilling at every turn. Another classic great British mystery with James Mason the classic smoothest, most urbane bad guy to ever grace the big screen and Paul Newman the American who seems to be playing catch up. No profanity, no nudity, no sex. Recommended.
See all reviews
Back to top
Get to Know Us
Make Money with Us
Amazon Payment Products
Let Us Help You
EnglishChoose a language for shopping. United StatesChoose a country/region for shopping.
© 1996-2022, Amazon.com, Inc. or its affiliates