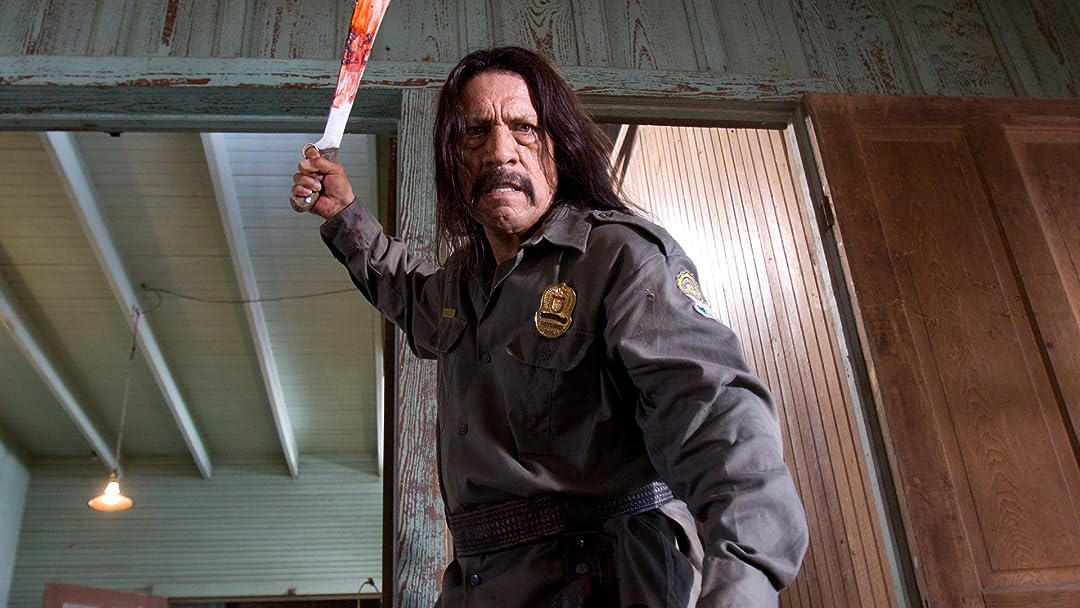 EmReviewed in the United States on February 4, 2020
1.0 out of 5 stars
Political movie, not action
Verified purchase
I was looking forward to just a fun and crazy action movie, but it's really just one huge political movie. I get enough of that in daily life, I don't need it in my movies.

That wouldn't be so bad if the pacing wasn't SO FREAKING SLOW. The description says it's a throwback action movie, but there's too much talking and not enough action. Overall, go watch Rambo because this movie sucks

joel wingReviewed in the United States on August 6, 2021
4.0 out of 5 stars
Danny Trejo as action hero ladies'man and person of few words
Verified purchase
Machete started as a fake ad in the Planet Terror-Death Proof double feature by Robert Rodriguez and Quentin Tarantino respectively. Rodriguez later turned it into this full length feature starring the amazing Danny Trejo. Rodriguez continued with the exploitation genre of Planet Terror and Death Proof. The story was about Mexican immigrants standing up to racism and exploitive politicians.

Besides Trejo the film had a great cast of Michelle Rodriguez as She, an ode to El – Antonio Banderas from Rodriguez’s Once Upon A Time In Mexico, as a member of a Mexican underground, Jessica Alba as an immigration officer, Cheech Marin as Trejo’s priestly brother, Lindsey Lohan as a rich daughter, Don Johnson as the leader of an anti-immigrant militia, and Robert De Niro and Steven Seagal as the villains. I mean really, how can you go wrong with that group of actors?

This was an amazing role for Trejo. He was an action hero, a ladies’ man, and a person of few words. He has some great lines as well such as “Machete don’t text.” It’s hilarious.

Tragically much of what’s discussed in the movie, building a wall, etc. has become reality in America.

D. John NickelReviewed in the United States on February 15, 2019
5.0 out of 5 stars
Surprisingly funny movie. Fun!
Verified purchase
Danny Trejo is a dead pan riot in this sorta take-off film with an actual plot. Dead people everywhere after most scenes but wait for the scene where Danny and his buddies hit the road to wipe out the evil doers. I had tears I was laughing so hard.
If you are an artsy film fan don't bother, but if you liked "Mars Attacks" or "Hot Shots part duex" you'll probably like this one.
5 people found this helpful

SungJae ShinReviewed in the United States on August 23, 2021
1.0 out of 5 stars
It is not a movie, but trash
Verified purchase
The movie is heavily based on specific political view point and there is no support evidence. The movie copied a lot of Japanese samurai style action and the quality is horrible. There is no story line at all and just jumble up something people such as naked girls, blood, violence. I like action movie but it is just wast of my time.
3 people found this helpful

BAT-505Reviewed in the United States on October 3, 2019
1.0 out of 5 stars
Badly written badly acted it is a waste of your hard-earned money
Verified purchase
Despite all all those other reviews I must tell you the truth are good friends I was highly and I see again highly disappointed with this movie such great actors but a very bad story.. but I guess those actors have to eat and pay bills like the rest of us and I truly thought this would be a good movie but I can only tell the truth and the truth is I would not recommend this movie for your collection you will not be happy with your purchase
4 people found this helpful

JTReviewed in the United States on September 20, 2021
5.0 out of 5 stars
One of the best action movies ever made..
Verified purchase
If you have never seen this movie, make sure you watch it. It has lots of action and a bit humorous at the same time, has lots of great stars in this movie like Steven Seagal, Robert De Niro, Jessica Alba, Michelle Rodriguez, and of course, Danny Trejo. They don't make great classic movies like this anymore, I highly recommend watching or even buying this one, you will love it.

MegatronReviewed in the United States on October 17, 2021
1.0 out of 5 stars
What a junk is this movie
Verified purchase
it's just about how Americans are bad and Mexicans are good. I'm not American but the irony of this movie is to make breaking a law of another country (I mean US), look fine. Every country on this planet has law for crossing their border like my country where I came from which is even stricter 10 times then US. I bet no one can enter these Hollywood actors and film makers house over their wall even illegal migrants. Their security guards will shoot them down in a sec.