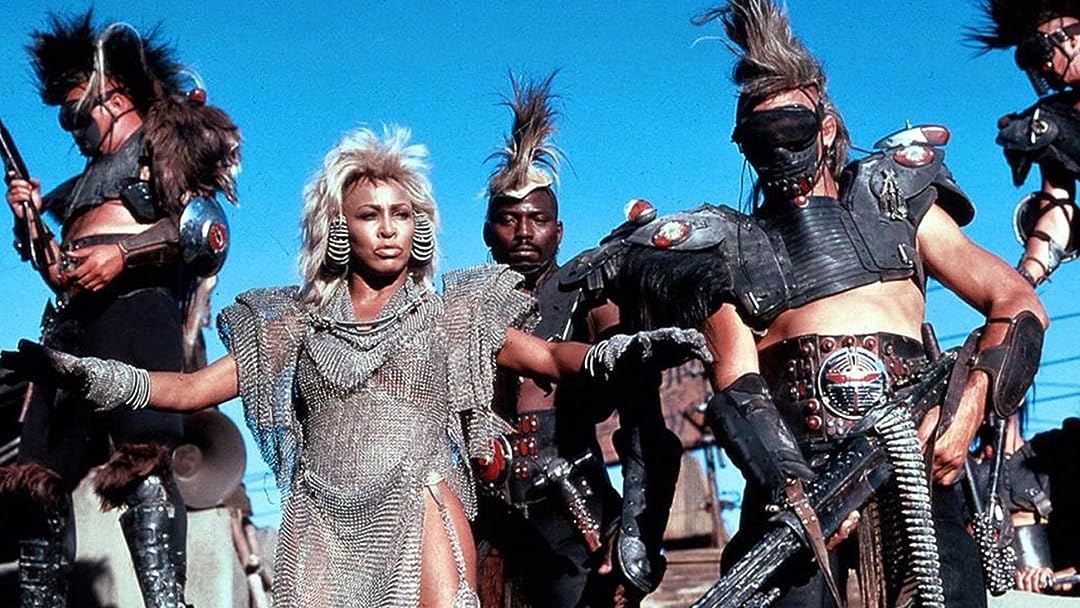 (3,417)
6.21 h 46 min1985X-RayPG-13
Set in Australia devastated by the effects of global thermonuclear war, surviving humans try to seek out a living in a world where water and food are worth more than gold.

Kevin CarhillReviewed in the United States on October 5, 2019
4.0 out of 5 stars
Missing a vital scene
Verified purchase
For years I felt this was the oddball of the Mad Max movies. The children didn't fit and the way Max acted seemed to make him a generic hero, HOWEVER... according to the Trivia, there's a deleted scene: Max has a dream about his wife and child and wakes up crying believing he's become one of the monsters of the waste... THAT would have been perfect to leave in the movie! It not only explains why the children story is so prevalent, and why Max acts the way that he does, but it ties up the entire trilogy with Max's character arc... Too bad, I'd like to see that cut of the film.
17 people found this helpful

Manuel VillalpandoReviewed in the United States on November 26, 2019
5.0 out of 5 stars
Great family movie!
Verified purchase
I never really appreciated this film back in 1985. Part of it was that I was too young and foolish to understand about nuclear radiation, war, etc. Now that I have watched it again, and because of the vast life experiences that I carry today, I can appreciate the movie quite a bit. Also, I am thankful to have fond and good memories of the acting of Mel Gibson and Tina Turner. I had the privilege of working at the Los Angeles, CA Greek Theater back in the early 1990's, and on one occasion, I was blessed to have had worked the back stage security detail for Tina Turner. Man, what a great woman she is, in all forms; singer, manners, and kindness.

Definitely recommend this film to all!

Amazon CustomerReviewed in the United States on December 2, 2019
5.0 out of 5 stars
i just cant help it...
Verified purchase
i love these movies. i love the aesthetic. theyre all ridiculous to a degree. the outfits. the vehicles. the chase scenes. the explosions. but theyre action packed and fun. this one has some classic lines. "two men enter, one man leaves." and "everything marked, everything 'membered." one thing i thought after watching it this time around - no matter the hardships that Max has faced, he's still a decent guy. he doesnt kill Blaster and he saves the kids. despite the danger to himself.
5 people found this helpful

DHReviewed in the United States on August 6, 2016
5.0 out of 5 stars
Nostalgia Awesomeness
Verified purchase
One of the classics. Great lines which to this day are relevant ("Two men enter, one man leaves!").

My fiance and I were watching all of the old ones in order to watch the new one with context. Beyond Thunderdome was a great addition to the Mad Max series of movies.

Tina Turner holds her own as the villain, and the characters are memorable and somewhat more fleshed out than you would expect from an action film.

Max's eyes are different; the pupil in his left eye is permanently dilated. This is a nod to Mad Max 2: The Road Warrior (1981). Max's car is forced off the road and he injures his left eye and other parts of his body.

The eye differences is easier to see in zoom shots, and VERY easy to see in HD versions of the film. The easiest shot is when Max looks down on the Thunderdome first.

Robert HayesReviewed in the United States on August 6, 2014
4.0 out of 5 stars
A more thought-provoking sequel that still delivers the action
Verified purchase
MAD MAX BEYOND THUNDERDOME, while a bit of a different beast than the previous two Mad Max films, is able to stand on equal terms with them in terms of action and spectacle as well as having deeper themes. This entry takes place several years after THE ROAD WARRIOR and has Max trekking the desert in a camel-drawn vehicle. After his vehicle and belongings are stolen by a pilot, Jedidiah (Bruce Spence, the Gyro Captain from the previous film), he makes his way to Bartertown. Bartertown is a city built in the aftermath of the apocalypse, and run with an iron fist by a strange character known as Aunty (Tina Turner). Hoping to get his stuff back, he agrees to fight in Thunderdome. After getting kicked out of Bartertown back into the desert, he meets a group of children who are surviving the apocalypse in their own way.

The best thing about the film is that it fleshes out the world established in the previous two entries, as well as bring in some new elements. The most interesting of these new additions is the Thunderdome, a caged arena where participants fight to the death with whatever weapons are available. The car chases were also creative, and had excellent stunt work, but the Thunderdome really showcases the brutality of the post-apocalypse in a way that the other action sequences couldn't (or didn't). Also, even though it made the narrative slightly unwieldy, I did like the side-by-side comparison of Bartertown with the tribe of children that Max meets. The central theme or message of this film seemed to be about how civilization recovers from apocalyptic events. Bartertown does this by regressing back to an animalistic, violent capitalism, while the young tribe remains innocent in anticipation for the return of a distant, utopian past. And all the while they hope for a better future. Thematically, this film stands head and shoulders above the previous two. Still, the way in which the narrative is drawn out makes the film a bit slow at times, which could turn off people who enjoyed the previous two for the non-stop action. Here, the bulk of the action is saved for the last 15-20 minutes, in a chase sequence that should please the action junkies in the audience.

As far as acting is concerned, it's ok but Mel Gibson is the only person who really does what I'd consider a "great" job. I also feel like Tina Turner was miscast as Aunty Entity, and a lot of her line readings felt really awkward to me. In contrast, I thought that the child actors portraying the tribe did a rather decent job. Overall, despite being a little slow at times, MAD MAX BEYOND THUNDERDOME is an entertaining post-apocalyptic movie with great action and some things to think about as well. Highly recommended, especially for fans of the series.
12 people found this helpful

NLabReviewed in the United States on May 19, 2016
5.0 out of 5 stars
Well done bluray for a good movie
Verified purchase
The second best movie of the trilogy. It lacks some of the blood and gore from the first two, but seriously today there's more than enough blood and gore in other movies today so I don't really care about them toning that down some.

The movie plays well, and unlike the first movie of the trilogy, has held up very well over the years.

As to the bluray itself, they did a great job on the remastering of the movie. It looks like it was shot in modern times, with crisp visuals and solid audio. If you're interested in the movie, the bluray version is definitely worth getting!
6 people found this helpful

Edward Fredericks jrReviewed in the United States on March 22, 2020
5.0 out of 5 stars
A Sci Fi Classic...
Verified purchase
I enjoy the Mad Max series of movies that feature him and various other colorful characters trying to survive in a post-apocalyptic world.

This is the 3rd movie in the series and once again brings back Mel Gibson as Max.

You can question any number of precepts or motivations within the plot, or you can just sit back and enjoy the movie for what it is: fun and entertaining.
One person found this helpful

Mr.Reviewed in the United States on June 8, 2001
5.0 out of 5 stars
We Don't Need Another Hero! Max'll Do Just Fine!
Verified purchase
The exciting conclusion to the popular Mad Max Trilogy finds our hero still alone, still wandering, and losing his possessions to an airplane thief (played by Bruce Spence, who played the Gyro Captain in Mad Max 2: The Road Warrior, but these are two totally different characters). To find some justice, Max enters Bartertown, a growing civilization of wanderers and rogues and makes a deal with Aunty Entity, played beautifully by rock sensation, Tina Turner. She wants him to kill Blaster, who's part of the duo, Master Blaster. Master is a little person and the one with the brains. Blaster is the muscle to back him up. By having Blaster killed, Aunty will gain total control over Bartertown and Max is the key. The duel takes place in Thunderdome, a place where "two men enter, one man leaves" and is one of the most exciting scenes in the whole movie, with Max fighting Blaster in this oval shaped cage with weapons placed in various positions. Needless to say, Max doesn't make out the way he'd hoped and is subject to exile in the nearby desert where he is rescued by a tribe of children who think he's their long lost Captain Walker, back to take them all home. Soon he sets them straight, but a few resist and set out to find civilization, with Max forced to go after them. They end up back in Bartertown where they decide to free Master, who is now a slave to Aunty Entity, and break out on a train while being pursued in what is one wild climax to the story. People will note that the violence tends to get cartoony, whereas in Mad Max 2 it was straightforward violence. My thinking is that in part 2 there was little to no humanity left in society. In Mad Max: Beyond Thunderdome, humanity has found its way back into peoples lives, including Max himself. He finds himself caring for these children who saved his life, something he hasen't been able to do since the death of his own little boy who was killed by a biker gang in the original Mad Max movie. This is the reason for the more cartoonish violence and why this film received a "PG-13" rating instead of an "R" rating like the first two films in the trilogy. Although clearly not for everyone, especially thoughs who wanted another Max film more like "The Road Warrior", Mad Max: Beyond Thunderdome is a strong ending to one of cinemas greatest heroes and trilogies. And Warner Brothers did a tremendous job remastering the sound and picture quality. Perhaps if a special editon DVD comes out they will include a commentary with the cast and crew and maybe also include the Music Video to "We Don't Need Another Hero (Thunderdome)" performed by Tina Turner. Who knows, maybe even a box set will be released of all three films together. Until then, We Don't Need Another Hero! Max'll Do Just Fine!
One person found this helpful
See all reviews
Back to top
Get to Know Us
Make Money with Us
Amazon Payment Products
Let Us Help You
EnglishChoose a language for shopping. United StatesChoose a country/region for shopping.
© 1996-2022, Amazon.com, Inc. or its affiliates