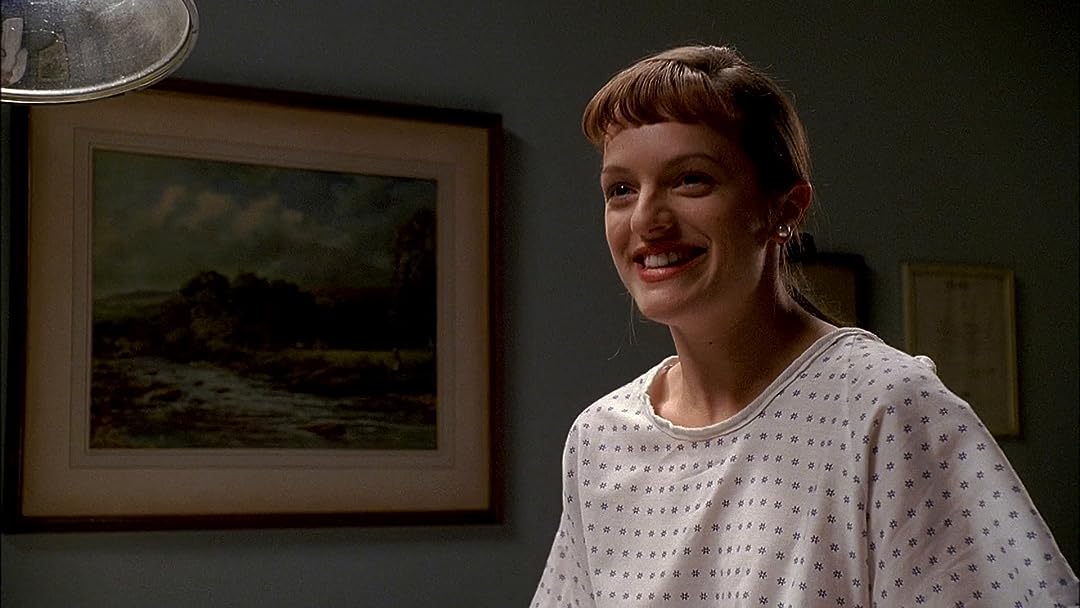 (3,030)
8.72007X-RayTV-14
Set in 1960 New York City, in an unexpected new world - the high-powered and glamorous "Golden Age" of advertising - where everyone is selling something and nothing is ever what you expect it to be. The drama unfolds around Don Draper (Jon Hamm), the biggest ad man in the business. As he calls the shots in the boardroom and the bedroom, he struggles to stay a step ahead of the rapidly changing times and the young executives nipping at his heels.

WEAK HEART 4 LIFEReviewed in the United States on August 17, 2019
5.0 out of 5 stars
VERY COOL PERIOD PIECE
Verified purchase
WHAT CAN I SAY ABOUT MAD MEN THAT HAS NOT ALREADY BEEN WRITTEN BY OTHER REVIEWERS ALREADY? I AM JUST GOING TO MAKE THIS SHORT. VERY COOL PERIOD PIECE TELEVISION SHOW SET IN THE 1960'S ABOUT AN AD AGENCY. IT IS SO NEAT TO WATCH A SHOW ABOUT A DECADE THAT TOOK PLACE 17 YEARS BEFORE I WAS BORN. JUST THE POLITICS THE CLOTHES THE CARS THE STYLES VERY INTERESTING TO SEE HOW DIFFERENT IT WAS BACK THEN ESPECIALLY TO SEE HOW SMOKING WAS SO HUGE AND SOCIALLY ACCEPTABLE AS OPPOSED TO HOW NOW YOU CAN'T SMOKE VIRTUALLY ANYWHERE. THE DRINKING ? I MEAN THESE PEOPLE ACTUALLY GET TO SMOKE AND DRINK WHILE AT WORK AND GET PAID WHILE DOING IT? DIFFERENT SHOW FOR A DIFFERENT TIME IN AMERICA!.
32 people found this helpful

PSReviewed in the United States on January 12, 2019
4.0 out of 5 stars
thank you for not smoking
Verified purchase
A very fine and realistic production about the world of advertising that I was also part of in NYC in the 80's and 90's. Thoroughly content for not being present in the 60's for all that ghastly smoking and constant drinking. At certain points, I started choking while viewing. Especially laughable when puffing in bed. I consider myself lucky that I'd been raised in a family where good health and hygiene was relevant. The major shock came when landing in Manhattan's dog-eat-dog ad-world. The boozing came later. I lasted for 15 years... made some friends and quite a few foes. Feeling much better now tilling in my organic garden in the South! Nevertheless, I look forward to watching season 2 just for the memories. Enjoy!
25 people found this helpful

C. OkamuroReviewed in the United States on October 22, 2020
5.0 out of 5 stars
Great show that's even better through binging (see details). Recommended
Verified purchase
There's something about hearing RJD2's A Beautiful Mind over the animated graphic intro of Mad Men...

There are some exceptions, sure, but overall the first season of anything is not going to be the best work of any series. The characters are nascent, lacking the development that inevitably comes with time and storylines. Mad Men is a little different, though, as most of the characters show a high degree of dynamic change from season to season, never quite settling into a static 2-D formula. That's why the first season isn't a throwaway. While it's obvious that the writers took the characters in vastly different directions, it all feels more or less like an organic progression from season 1.

If you're wondering if you should start watching Mad Men, the answer is "yes". Highly recommended

DouglasReviewed in the United States on June 24, 2014
5.0 out of 5 stars
What's To Say But...?
Verified purchase
I just recently "got into" Mad Men and purchased the first 3 seasons on Blu-ray. Thus far, as I leisurely work my way through Season 1 I have just 3 words to say: I love it! If you're old and gray or feel that way (as I sometimes do mainly because I'm getting old and gray) Mad Men might just be the thing to perk you right up and rekindle thoughts of bygone days and simpler times. It’s weird, wild, and wonderful all at once – in its way a fanciful window showing life as it once was in so many ways. In other ways – well, now I don’t want to spoil anything!

This I will honestly say: For my nickel, Mad Men is quite possibly one of the greatest things to come along in many years. I would almost say it just might be the Twin Peaks of its age. Though set (for starters) more than 50 years ago in March, 1960, Mad Men is that fresh, that funky – that much pure fun to watch. I’d recommend it to anyone looking for a good “period drama.”
19 people found this helpful

DanOReviewed in the United States on January 17, 2022
3.0 out of 5 stars
I want to like this show… But
Verified purchase
The acting, production values etc. of the show are remarkable. But boy oh boy… Is this a slow moving story. This reminds me of my grandmothers soap operas. You could walk away and not see the show for a month or two and not much changed. If I go back to watching it, I'm going to have to skip several episodes at a time so that I don't lose my mind. Finally, the flashbacks to him as a little boy are really overly simplistic. It reminds me of a writer who has never experienced child abuse "Imagines" what that would be like

mnraftReviewed in the United States on January 1, 2014
5.0 out of 5 stars
TV mini-series at its best
Verified purchase
The 52 episodes of "Mad Men" Seasons 1 Through 4 constitutes a sort of masterpiece in TV mini-series. What makes it so good are the subject matter, casting, care in creating the early-60s atmosphere, and the unity and consistency that comes from a single person (in this case Matt Weiner) having co-authorship in every episode. Such a mini-series is to a 2-hour movie as a novel is to a short story.

The main subject is the self-awakening of Dan Draper, the creative head of the concepts department of a Madison Avenue advertising firm. Dan Draper is played by Jon Hamm, a very good actor with a lot of live-theater experience. Hamm is a commanding presence, looks the part, and is up to the challenges of this demanding role. Dan Draper is a talented man functioning brilliantly in his professional career, but he is an alcoholic, a dysfunctional husband (although a reasonably good father), and a compulsive womanizer. We learn, as he learns, from his mental flashbacks that occur from time to time, that he is a man escaping from a very difficult childhood. We root for him despite his flaws because he is troubled and displays an innate decency at key moments. By the end of series 4 he has achieved a certain level of self-awareness, and we the audience have been on an interesting journey.

Personally, I think they should have stopped with series 4, but that's a different story.

The rest of the ensemble cast is generally excellent. There are many interesting sub-plots. We follow the rise from secretary to Dan Draper's co-worker of Peggy. Its a struggle all the way for her in the pre-Feminist world of the early 60s.

I have the Blu-ray versions of seasons 1 through 4, which I purchased individual. Each season is 13 episodes spread across 3 Blu-ray discs. The picture quality and sound quality are fine. There is an optional commentary track for each episode. The presentation is fine.
13 people found this helpful

B. MaroldReviewed in the United States on February 19, 2013
5.0 out of 5 stars
Excellent plot, characters, dialogue...Good Writing.
Verified purchase
How can I hope to say anything which has not already been said about this AMC series in over 450 reviews. I can only add my personal reactions. I have been avoiding it for several seasons, since I found the relation between men and women quite disturbing, in spite of the fact that I lived through that early '60s era, but in a somewhat lower class family, where my mother worked in a factory and my father in the steel mills. I was also a bit turned off by the time spend in the bedroom rather than the board room. I loved "The West Wing" because, among other things, it demonstrated how power was far more exciting than sex, and I thought that the new series "Suits" did the same thing. But, after seeing none of my USA, TNT, and TBS series win any awards, and the AMC series raking them in like Hershey Kisses, I thought it was time to give this a try. A nudge from my Facebook friend Esther Schindler didn't hurt.

So, I have discovered that the pace, the dialoge, the characters, and the situations, all framed with superior writing and good acting, really draws me into this world, in spite of its air of testosterone out of control, where the only thing the men want to do with all the women they meet is to get them into the sack. That's an exaggeration, of course, but it happens far more than most other series this side of Californication.

If I had any complaints, it would be that there are very few really satisfying conclusions to the story arcs. One gets the feeling that the big climax will come with the series finale, similar to Josh Lyman and Donna Moss finally hooking up in the next to last episode of "The West Wing." Closing deals with clients just doesn't give me a great deal of satisfaction. There are personal crises, but everything is so low key, one is reminded of how empty people's lives seemed to be before the great cultural revolution of 1964. On the bright side, I am positively looking forward to watching the next season to see how things work out.

It's interesting to compare John Hamm with Gabriel Macht of "Suits". Both characters are eminantly skilled at their jobs, and comfortable in their own skins. But "Mad Men's" Don Draper is understated while "Suits" Harvey Specter is arrogant and just a bit blind to his weaknesses.
15 people found this helpful

David LuceroReviewed in the United States on July 27, 2013
5.0 out of 5 stars
A Classy Series Representing Classy Times
Verified purchase
I only learned of this show at the beginning of the 6th season and enjoyed it so much my wife and I ordered the 1st season to catch up. This show reminds us of how the word 'class' got its name. The writers have created stories that leave you fully engaged, and have reminded us of things we take for granted. Take for instance the introduction of going to work dressed to impress! And how about the time when people used electric typewriters! I never heard of John Hamm before, but I'm sure we'll be seeing and hearing much more of him.

He plays the part of a man with a plan to the hilt. The trouble is, he has a past he is running away from, and as he states in an episode with someone from his past, "There's only one direction my life is moving, and that's forward." The show also reminds us of the introduction of popular ads we now view as commonplace. There's Lucky Strikes, coffee brands, women's clothing. They've obviously done their research because I feel renewed pride in my work from watching how this show reflects we all have an important role in what we do, only sometimes need to be reminded. This show not only entertains you, but for me has reminded me where I've been and where I am now, and what's more, I can be proud of who I am. In short, I haven't watched a show like this where I feel good about who I am and how I dress in a very long time.
6 people found this helpful
See all reviews
Back to top
Get to Know Us
Make Money with Us
Amazon Payment Products
Let Us Help You
EnglishChoose a language for shopping. United StatesChoose a country/region for shopping.
© 1996-2022, Amazon.com, Inc. or its affiliates