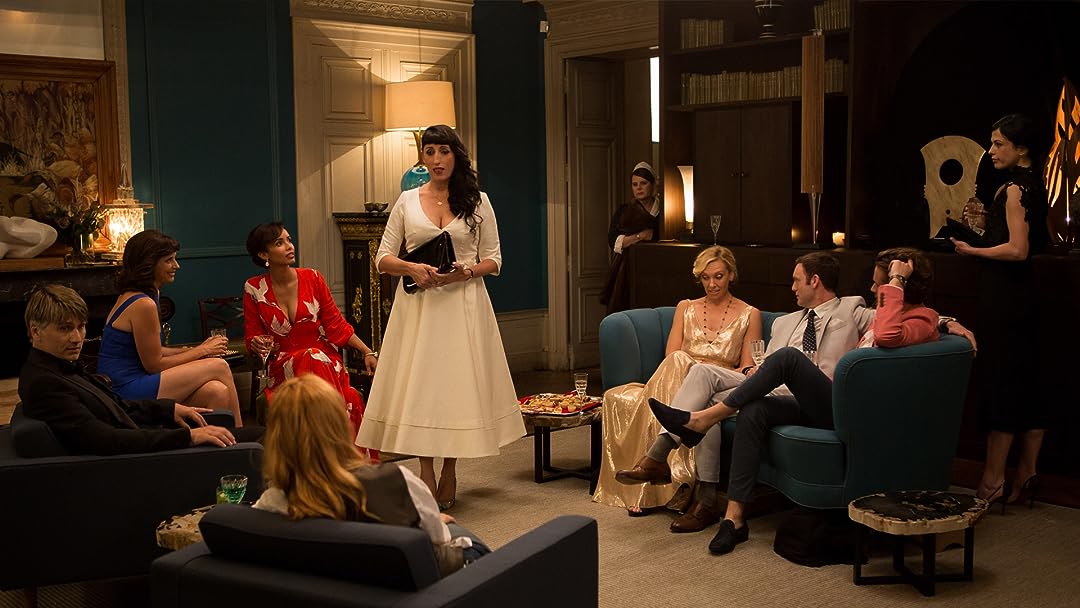 (669)
1 h 31 min2018X-Ray16+
Anne and Bob, a well-to-do American couple, have just moved to a beautiful manor house in romantic Paris. To impress their sophisticated friends, they decide to host a lavish dinner party, but must disguise their maid as a noblewoman to even out the number of guests. When the maid runs off with a wealthy guest, Anne must chase her around Paris to thwart the joyous and unexpected love affair

CherylReviewed in the United States on February 18, 2019
3.0 out of 5 stars
So-called comedy... tragic ending.
Verified purchase
Anne (Toni Collette) and Bob (Harvey Keitel) are a wealthy American couple who have taken up residence in Paris in an effort to bring new life to their marriage. One day, when they are about to throw a dinner party, Bob's son, Steven, from his previous marriage, comes to visit, and his father asks him to their dinner party. Anne, distraught over the idea of "bad luck" of seating 13 for dinner, forces her Spanish maid, Maria (Rossy de Palma), to fill out the table to 14.

Maria is very class-conscious, and does not want to do it, but Anne insists. And then she commits the terrible faux-paus of actually engaging in conversation during the dinner, and catching the interest of an art dealer named David Morgan (Michael Smiley), who falls for her. So they begin a beautiful romance, where he does not care that she is "just" a maid.

But once Anne finds out about it, her own insecurities come flooding out, and she becomes determined to stop the relationship -- despite the fact that her own marriage has problems, she has an affair of her own, and her husband is starting an affair. Those who live in glass houses, and whatnot... but Anne is too insecure about her own place in the world to be happy for her maid's newfound love and happiness.

One might say that this film all too accurately reflects life: that alas, the happy ending is not always there; that people can be far too judgmental and shallow; and that you don't always get what you want -- sometimes, life is tragic and unfair because of the scheming of others.

Rossy de Palma is a delight. I have loved her acting for many years, since seeing her in Pedro Almodóvar's films -- and I truly wanted to see her character, Maria, be able to triumph over Anne's scheming; but alas, that is not what this film had in mind. So I enjoyed most of this film, until the end "twist", and then I was so annoyed at the ending (plus Bob hooking up with a girl probably 50 years his younger - ughhh!), such a disappointment.

Rosario M.Reviewed in the United States on January 25, 2021
1.0 out of 5 stars
Racist statements
Verified purchase
During the opening scene, Collette's character stated " Nobody invites Filipinos to parties" Referring to her Filipino maid in the movie, she said that "her English is terrible. I am no even sure that she speaks Filipino" This is extremely offensive to the Filipino people. I am a Filipino physician who is a naturalized citizen. Most Filipinos speak English extremely well as this is the language generally used in our schools.Aside from being racist, this movie is misguided and poorly researched. In fact, I think this movie is both vulgar and pathetic.

The statements are racist, demeaning and disrespectful to us a people. I urged the makers of this movie to issue an apology for such blatant racism. I stopped watching this movie as soon as I heard these offensive statements.
59 people found this helpful

MZReviewed in the United States on February 4, 2021
1.0 out of 5 stars
Write-up does not match the movie
Verified purchase
The summary of this movie made it sound like a comedy. It's not. It's not even a dark comedy. The movie is well-made with good acting, directing, sound, cinematography, etc. but there is NOTHING to like about it. And the end is awful. After watching, I just wanted my time back. I kept thinking it was going to get funny. Nope. Just a bunch of characters doing horrible things. The maid is a nice character, but practically every other character in the movie are people you would never want to meet. One excels at being viciously mean while pretending to care for someone or do a favor; but we're supposed to excuse that because her life is so empty. Infidelity abounds and shallowness. And even a character that seems flawed but nice turns out to be a jerk. Is it worse when someone who seems to be your friend betrays you or is it worse for a mean person to be mean to you? None of the characters changed from beginning to end, except the maid. And her circumstances at the end aren't exactly happy. UGH. Can you tell I hated this movie? Yuck.
58 people found this helpful

LitChickReviewed in the United States on May 27, 2020
4.0 out of 5 stars
The ending - my take on it (spoiler alert)
Verified purchase
I enjoyed this movie; the acting was great across the board, it was entertaining and a good story, and Rossy de Palma shone as the main character. Many reviewers have complained about the ending. To me, the ending said that she had been under an illusion as well. She believed that the man she fell in love with truly loved her for herself in spite of the fact that she was a maid. At the end, she learned that he was just like the others and that she had been deceived, as well in believing that. He turned out to be just another shallow, self glorifying character who dropped her like a rock when he found out the truth. Of course he knew who she was when she served him tea in the final (mortifying) scene in the family's home. She came out the winner as she left the family to move on with her life in Paris, where her uniqueness could be appreciated and celebrated instead of returning with them to New York where they would continue their tedious social climbing, and she had enjoyed the romantic liaison. She seemed hurt but not definitely not heartbroken as she was the only character with true inner strength and self esteem that came from within, not from constant efforts to impress others. When she saw what he truly was, she was able to easily let go and move on.
64 people found this helpful

Kerri L.Reviewed in the United States on March 15, 2019
5.0 out of 5 stars
A beautiful piece of film making.
Verified purchase
I read the other reviews, and the negative ones were not very kind. This film is a piece of excellent storytelling. The main character, Maria, played by my new favorite actress Rossy de Palma; is a flesh and blood woman. Her struggle is real, and beautiful, and in the end she learns something about herself, I like to see characters evolve and change. The way the film is shot is also lovely, with wide shots that flip seamlessly into close shots of faces as they struggle with their emotions. It feels very intimate and genuine. I loved it and will watch again.
85 people found this helpful

David H. (Austin)Reviewed in the United States on May 18, 2020
4.0 out of 5 stars
See it for Rossy de Palma’s performance.
Verified purchase
This movie is fairly straight forward with Toni Collette and Harvey Keitel as arriviste Americans of dubious sophistication trying to make their way into Parisian society. They also have a maid who works in the kitchen and serves part time as a nanny to this vile couples’ younger son. The maid is played by the utterly beguiling Rossy de Palma (Pedro Almodovar’s muse by the way), so forget the Collette/Keitel dreariness and simply enjoy every scene featuring de Rossy. Apologies to Collette and Keitel, but Rossy de Palma steals every scene.

While the the usual betrayals, character assassinations, and faux sophistication occupy the putative main characters that are alternatively predictable and tiresome play out, the beauty of France compensates for the histrionics. Toni Collette chews up the scenery with her character’s neuroses and Harvey Keitel, sadly, provides one eeeew reaction after another.

So, that leaves us with Rossy de Palma. She is the only fully realized character in this movie: sassy, wise, proud, and gifted with a one of a kind absolute beauty. See it for the sets (one kitchen scene takes on the look of a Vermeer painting) ; see it for the French locations; and most of all see it for Madame de Palma. Three stars for the movie but elevated to four stars by de Palma.
45 people found this helpful

Mrs. WangReviewed in the United States on March 2, 2021
5.0 out of 5 stars
Beautiful filmmaking & storytelling
Verified purchase
I, too, was expecting a hilarious comedy, and that's not what this film is. All of the negative reviews that I've read have misunderstood the film. Each scene, artistically framed and shot, is a vignette on the themes of truth vs deception, real vs fake, love vs indifference, beauty vs ugliness, and the scenes interlock to form a complete story with a triumphant ending (not at all tragic as another reviewer wrote) - it's the triumph of truth and beauty. Every detail in the film has significance, and there's plenty of symbolism, such as the Caravaggio and the jewelry. Each character reveals his or her authentic self/soul at some point in the film, and the director seems to be asking us to consider what our own authentic selves may be. Some reviewers misunderstood this film as a criticism of the nouveau riche, but Bob and the art broker are both "old money" if you listen carefully to their stories. One review complained that many characters are unlikable, and that's exactly the director's point (beauty vs ugliness). The film is a modern fairy tale in which the "princess" rescues herself - there's even a dragon if you look carefully.
30 people found this helpful

HDTV buffReviewed in the United States on January 16, 2021
1.0 out of 5 stars
Why was this movie made?
Verified purchase
Aside from watching Rossy De Palma act. I found nothing about the movie to like. Racist talk about Filipinos, "comedy" that isn't funny. The ending is utterly predictable. It's a glorification of inane people.
35 people found this helpful
See all reviews
Back to top
Get to Know Us
Make Money with Us
Amazon Payment Products
Let Us Help You
EnglishChoose a language for shopping. United StatesChoose a country/region for shopping.
© 1996-2022, Amazon.com, Inc. or its affiliates