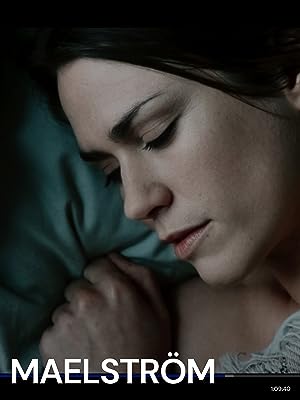 Included with MUBI on Amazon for $5.99/month after trial

Watch with MUBI
Start your 7-day free trial
Add to
Watchlist
By ordering or viewing, you agree to our Terms. Sold by Amazon.com Services LLC.
Write review

Nassira NicolaReviewed in the United States on December 3, 2002
5.0 out of 5 stars
Outstanding and shocking (even without the talking fish)
Verified purchase
Right, so if you've heard anything about Maelstrom, it was probably "Yuck/wow/hmmm, it's narrated by a series of fish on the chopping block."
Yep, it is. That's not why you should see it, though.
Bibi is a successful fashion designer in Montreal whose personal life is in a shambles; she can't escape from her famous mother's shadow, nor from the shock and guilt of the abortion she has in the first scene of the film. She gets drunk one night and kills a Norwegian fisherman in a hit-and-run accident. From that moment, what's left of her life becomes entwined with what's left of his.
Bitterly funny moments abound: the soundtrack in the abortion scene plays "Good Morning Starshine"; an obnoxious journalist tries to interview an uncooperative (and hungover) Bibi; she very bluntly declares her love (ok, lust) on an airport runway; she is forced to drink to a toast calling for her own disembowellment; her best friend loses track of how many abortions she's had, and unwittingly sings a gory Norwegian battle song as a lullaby . . .
As the list of "jokes" may indicate, this is often a very dark film. But in the end, it goes a long way toward making you think about the nature of fate, life, death, love, and redemption - and in its odd little way, it's quite uplifting. The cinematography is breathtaking.
And, hey, there's a talking fish.

Doug BlackwoodReviewed in the United States on November 11, 2013
5.0 out of 5 stars
Strange and Satisfying
Verified purchase
I first saw this at the Independent Film Festival in Los Angeles, April of 2001. Any story narrated by a talking fish in hell is intriguing, in my book!
It's a tale of mayhem, guilt, fate and redemption. I mustn't give away too much for fear of spoiling the surprise plot twists and turns. All I can say is get it! Watch it and be entertained. This director reminds me of another Lars Van Trier, without the coldheartedness but with much of the dark vision and humor.
It's good for many repeat viewings as well.
One person found this helpful

RHReviewed in the United States on January 6, 2017
5.0 out of 5 stars
Five Stars
Verified purchase
Wonderful product and excellent service. Thank you!

Gerhard EbnerReviewed in the United States on May 9, 2015
5.0 out of 5 stars
Five Stars
Verified purchase
alles bestens - keine probleme!

Tyler JobsonReviewed in the United States on February 4, 2019
4.0 out of 5 stars
"How we deal with death is at least as important as how we deal with life, wouldn't you say?"
In Denis Villeneuve's second feature, we follow Bibiane (Marie-Josée Croze), a young Montreal woman who is stricken with so much guilt that she wants to die. Not only did she just have an abortion, she is running the clothing business she inherited into the ground. As if her life could not get any more complicated, she must deal with the consequences of driving into a pedestrian. Unlike the style of the director's 2010s fare, this movie is more akin to French cinema. Besides its hand-held cinematography, the movie has the kind of surprises and coincidences that would make it fit in with Kiezlowski's Three Colors trilogy. While this style is not as satisfying as the signature one Villeneuve has been honing for the last ten years, it at least made me appreciate the range of his talent. Bibiane's series of unfortunate events in Maelstrom amounts to a dark and poignant reflection on how death gives meaning to life. After watching Prisoners, Enemy and this movie, I feel like I have a strong understanding of the dark parts of the human soul, not to mention one of why Villeneuve is considered one of the best directors working today.

TimReviewed in the United States on April 4, 2003
4.0 out of 5 stars
The meaning of Life
This is probably one of the more original films I've seen in a long while. The director has clearly drawn influence from the Blue White Red trilogy, but that don't take away it's originality or it's power.It's about abortion, death, love, philosophy, and a talking fish. Go figure, one of the greatest films of the year.
One person found this helpful

captain jimReviewed in the United States on August 31, 2001
4.0 out of 5 stars
canadian gem
Maelstrom earned best film, best director, and best actress in canada for good reason. Highly imaginative and original, this is a story about life and death. A story about a young woman told by a 'cronenbergesque' fish on a chopping block.
One person found this helpful
See all reviews
Back to top
Get to Know Us
Make Money with Us
Amazon Payment Products
Let Us Help You
EnglishChoose a language for shopping. United StatesChoose a country/region for shopping.
© 1996-2022, Amazon.com, Inc. or its affiliates