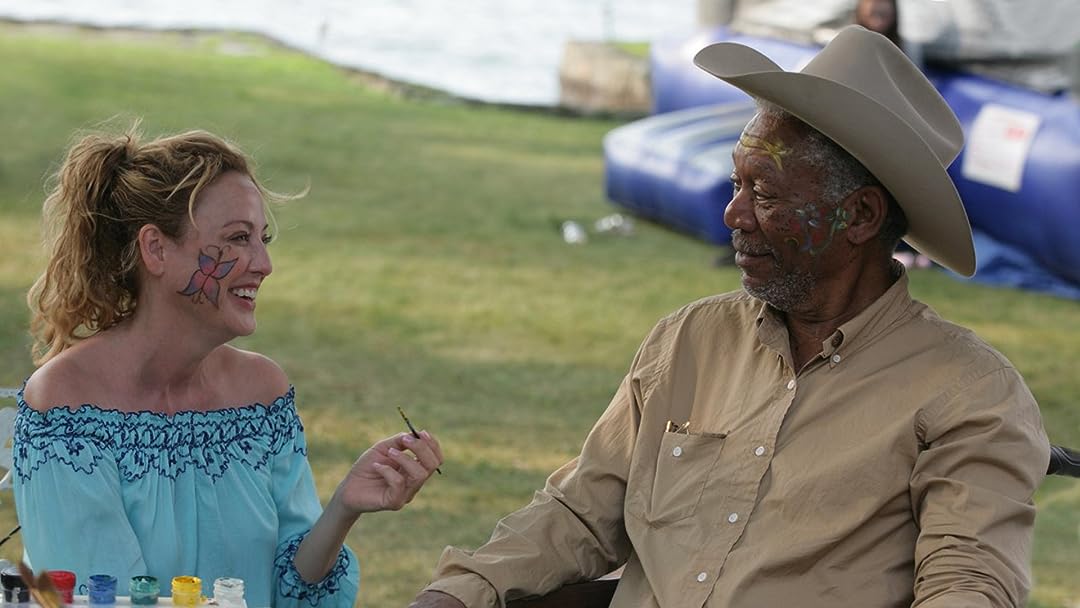 The Magic Of Belle Isle

(6,898)
6.91 h 49 min2012X-RayPG
Morgan Freeman plays Monte Wildhorn, a famous Western novelist whose passion for writing hits an impasse. He takes a lakeside cabin for the summer in picturesque Belle Isle, befriending the family next door - an attractive single mom (Virginia Madsen) and her young daughters - who help him find inspiration again.

ForeverYOUNGReviewed in the United States on August 19, 2020
5.0 out of 5 stars
The magic of belle Island
Verified purchase
This movie is older, but a very, very poignant story for our current times. I love the casting couldn't be better. It IS a "feel good" movie that we are sorely lacking (my personal opinion). Basically a near middle aged young mother is raising 3 young girls who are smart, sparkly individuals - trying to find their way in life. A curmudgeon, bitter older man moves into the home next door and immediately becomes entwined in the young women's lives. It's just a really sweet story as it unfolds. Respect for each other, decency, and empathy is developed and defined in this thoughtful story. I like to purchase via stream - no dvd to store!
35 people found this helpful

D. at LLRCReviewed in the United States on June 17, 2020
5.0 out of 5 stars
A VERY PLESENT MOVIES WITH A VERY INTERRESTING ENDING
Verified purchase
HOW MANY TIMES HAVE I WATCHED THIS MOVIE..... At LEAST 3 times a month since I purchased this movie 5 months ago, and I have shown this movie to others at least another four more time with guests here at home.
The movie is about a disabled man who has moved to a house by a lake. At first he is angry and being left in a new place.
He finds that the people who live around the lake have stories of their own, and as he becomes to be part of the community and the neighbor, his internal anger changes into wanting to be part of the community and have the friendship of the neighbors that live in his new neighborhood.
A GREAT MOVIE

PocatellocowboyReviewed in the United States on February 21, 2021
5.0 out of 5 stars
One of my favorite movies
Verified purchase
I saw a two-star, negative review. In short, this person had NOTHING good to say about this movie. I am baffled. Utterly baffled.

Unless you simply don't like to feel good, don't like great cinematography, perfect acting, and a wonderful story, I have no idea how you could write less than a stellar view for this movie.

I can't say enough good about it. If you want a movie that will warm your heart for weeks to come, this is your show.

Sweet OnionReviewed in the United States on February 14, 2021
2.0 out of 5 stars
No wonder I've not heard of this film before
Verified purchase
This movie was predictable and in so many ways not plausible in the story line. How Morgan Freeman got involved in this poor, sappy film is the real question.
Many Spoilers Explain Rating: The young girl desires to go to an island in a large body of open water and does so with a few other children on a log raft without floatation devices for the children. The adventure is supported by their mother. It's a fairly long distance to the island. Once there, it was a brief scene and no follow up much on why she wanted to go there. Not much revealed in what was found in the diary there. Main actor is a fifth-of-whiskey-a-day drinker for a long period of time but amazingly just quits one day with no physical withdrawals. He also cannot use his legs or one arm yet lives by himself. It seems there would be some effort to show his struggle in handling his living situation. He writes by typing with one finger on one hand on a vintage manual typewriter. And how long would it take him to type out a manuscript? A very long time, of course. He shoots a gun off at a children's party within a town. The young girl uses a sharp spear at the same children's s party. There is no chemistry at all between the two adults. The dialogue is lacking in depth and there is several scenes when the young characters have rather aggressive behavior. This was probably the worst film I have seen in some time.
5 people found this helpful

ArtistDame1Reviewed in the United States on July 21, 2016
5.0 out of 5 stars
Even better than anticipated!
Verified purchase
There were enough great lines in the trailer, I was hopeful there would be more and I was not disappointed. Morgan Freeman is a given for great performances and I thoroughly enjoyed how he fleshed out Monty. For me this was truly a movie where there were some small parts but no small actors.

No flash bang, no murders, no drama or shouting simply an engaging story, well acted with scenery that made me want to be there. Because I watched on a weeknight, I stopped and started a number of times to fix my dinner, make some ice cream for my hot summer day's craving, etc. Each time though, it was like reading a good book you have to put down while you attend to life, think about as you do and can't wait to get back to it.

A most enjoyable way to spend an evening!
36 people found this helpful

jerry h.Reviewed in the United States on January 22, 2021
5.0 out of 5 stars
Finest actor of our times.
Verified purchase
IMO, Morgan Freeman has got to be the best actor of recent memory. This movie is well written and directed. I do not think I have seen a bad film that he is in. The story is well rounded and the supporting cast is very good, but no one but Freeman could have pulled this one off. I wish there were many more movies like this, that do not have the violence and sex scenes. I look at it this way, if you want to see sex, then use a porn site. We do not need sex and violence in our movies to be a great movie.
7 people found this helpful

ricracReviewed in the United States on August 2, 2015
5.0 out of 5 stars
Morgan Freeman was superb and so was this movie!
Verified purchase
The Magic Of Belle Isle is wonderful!
It’s rare indeed when a movie, or tv show, makes me laugh out loud,
but this movie did— several times. It’s strange as I sit here writing this review.
I have smile on my face, and am close to tears at the same time.
As so many have already said, it tugs at your heart strings… it’s a feel good movie
and it is both at the same time.
All the characters were expertly portrayed by their respective actors. I became immersed
in their character’s growth and development as the story progressed.
How refreshing too for a movie to have no sex, no violence, no drugs… well, Monty did
drink a lot as he wallowed in his self-pity and anger at the world, his wife, God — every one
and everything until a 10 yr old girl shows up on his doorstep. Through the innocence
of children and their straight forward way of asking questions and stating their
true feelings, Monty begins to join the world of the living once again.
I rarely feel like I want to watch a movie again…but this is one I do —
I didn’t want it to end. There was one surprise… I expected him to send off
his Tony the Elephant stories to his ever present, yet not present, publisher.
Then again, maybe Tony belonged to Flora just at the piano playing mother mouse
belonged to her mother—not for publication.
31 people found this helpful

JMDReviewed in the United States on July 1, 2016
5.0 out of 5 stars
Feel-Good Without Feel-Fake
Verified purchase
I put this on my watchlist because it looked like a light little reprieve if I needed a break. I put off watching it for a long time, though, and shouldn't have. It's one of the best movies I've ever seen and I decided I had to own it. The characters are complex and real without being chronically dysfunctional. It's sweet, heartwarming and humorous without being at all forced. While a couple of the characters are quirky, they're the sort of quirky many of us either are or know. Very well written and performed.
24 people found this helpful
See all reviews
Back to top
Get to Know Us
Make Money with Us
Amazon Payment Products
Let Us Help You
EnglishChoose a language for shopping. United StatesChoose a country/region for shopping.
© 1996-2022, Amazon.com, Inc. or its affiliates