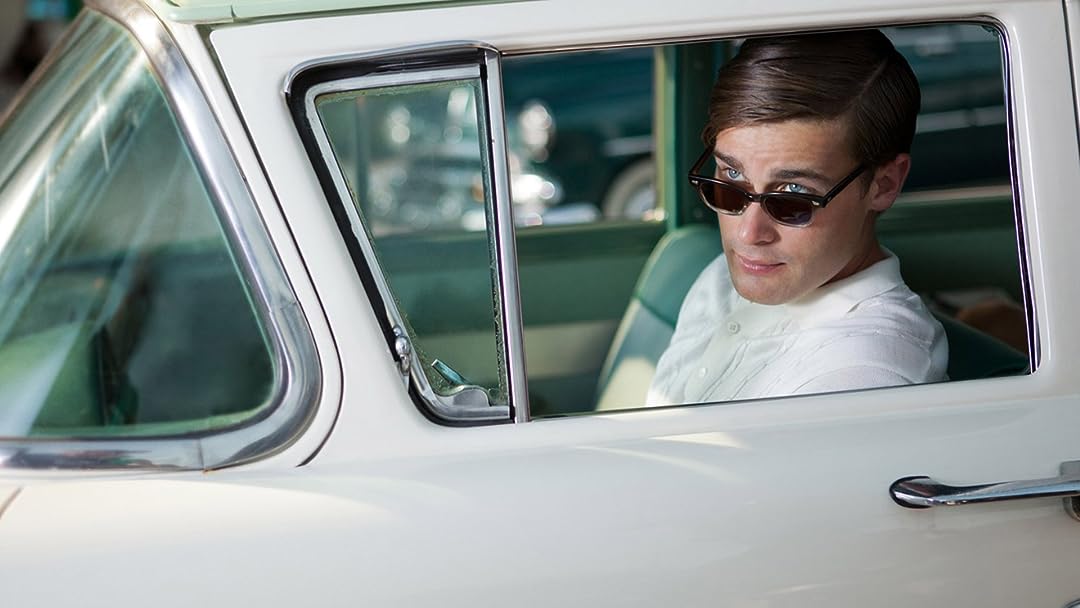 (543)
7.62012X-Ray18+
It's 1959 and nothing at Miami Beach's Miramar Playa is what it seems. As the hotel owner's world threatens to implode, he fights for his family and the Miramar Playa, in the Magic City.

Chance WayneReviewed in the United States on May 4, 2015
4.0 out of 5 stars
The Magic City (Miami) and the "World's Playground" Miami from its glory days in the late 1950's by designer Morris Ladipus.
Verified purchase
A most interesting film, IMHO, obviously, of the original founder, and, private , the late Ben Novack, of the legendary Fontainbleau Hotel
4441 Collins Avenue, Miami Beach, FLA. the story was part fiction,and a lot of the basic outline of the story was true, such as.. the late
Frank Sinatra, had a private suite at the Fontainbleau, for decades, from winter season of 1954/55 up thru, the end of the winter season
of 1977, and founder Ben Novack, had a son, who had a reputation as being very cocky and gregarious, who also lived at his fathers
llandmark hotel. Ben Novack was also, from hearsay, friendly, with the late 1930's mobster, Meyer Lansky, who lived just 2 blocks up the
street in another high rise condo, next to the Eden Roc. I get a lot of this information, from my employment as a bellhop at the original
Fontainbleau hotel in 1975 and 1976. The hotel was foreclosed on and closed down in April of 1977, (briefly) and Roland Int'l Corp/Steven Muss
of Miami and Hilton Hotels did a big time rehab, especially of the pool, and eliminated the famous beach bungalows. The movie itself was
rather seedy at times, thus, I gave it a 4 star, rather than a 5 star rating. Season II was also very interesting to view IMHO. The Fontainebleau
was unfortunately closed down for about 18 months, in 2006, when two investors, stripped down the main bldg., and, spent so much money
on it, they were facing foreclosure by 2008, heresay is the partner firm, a Dubai World, bailed out a near 2nd bankruptcy. The hotel, now is
dwarfed by the 2004/2005 super high rise Fontainebleau II Condominium, (37 stoires) and furthermore, the former, Fontainebleau Spa, once the
Sorrento Hotel, until Ben Novack bought it, was imploded, and a 18 story Fontainebleau III condo has now replaced it (18 stories) making the
once spacious 22 acres, very, very crowded, in the here and now. Movies, "Goldfinger 1964" "Tony Rome 1967" "The Specialist" were all
partially filmed on location there. The Boom Boom Room, The Gardens, and the Tennis Courts are now gone, as, is Club Gigi, Tropigala Lounge,
and the LaRonde Superstar theater are also gone, from ABC TV's "Surfside Six" days filmed 1960 thru 1962.(so is the famous Houseboat, that
the murderer of fashion designer, Versace, hid out, until he was caught by LE.in the mid 1990's. Again, the movie is still quite contagious to
watch for anyone, who ever vacationed there from the 1950's thru the 1990's heydays, under two different, managements. Miami, "truly the
Magic City" has been totally transformed, as has Miami Beach, with the massive Cocaine Cartel influx of cash during the 1980's, and now the
population of greater Miami/Miami beach has changed from 25% Latino, to 65% Latino, based on the 2010 census.

skeeterReviewed in the United States on September 4, 2016
5.0 out of 5 stars
Magic City Captures Magic in a Bottle
Verified purchase
Outstanding period drama set in 1959 Miami with the handsome and sexy Jeffrey Dean Morgan starring as a Miami beach luxury hotel owner reluctantly in bed with the Mob to save his family business.
The storytelling and characters are outstanding, the acting ensemble is a first rate dream cast, the costumes are as magnificent as the luxurious sets, and the cars from that era are just stunning, a fan favorite of the show.
This is a well-wriiten, quality TV series for adults only that you don't want to miss.
Unfortunately, it was canceled after only two seasons, which was one of the biggest mistakes in cable TV history by a short-sighted executive who refused to listen to legions of faithful fans and could not see they had a top quality show and cast, and had captured the ever illusive magic in a bottle. Magic City still had a lot of good seasons left in it and room to grow.
15 people found this helpful

Laser PointReviewed in the United States on July 6, 2013
5.0 out of 5 stars
Terrific Series
Verified purchase
This is a great series with terrific story lines, acting, and production values. The story takes place in the Miami Beach of the fifties-just after Castro takes Cuba. Ike Evans' Miramar Playa is the showplace of the City. But everyone wants a piece of it. So the question becomes can he keep it and can he keep it legitimate. The Miami Beach of the series is populated by gangsters, politicians, "honest" businessmen and people on the make from every direction. The actors are uniformly good with special mention to Jeffrey Dean Morgan, Danny Houston, and Elena Satine. This girl is amazing as a hooker dealt an extremely dangerous hand who is terrorized by gangsters and an underhanded DA but refuses to buckle under the weight of her own fear.
The first couple of episodes set the general story line, the characters, and the place in time. The pace picks up considerably with each passing episode.
This series can be compared to Boardwalk Empire. Both deal with a particular city and a particular historical period. But Magic City is superior for both the writing and the acting. I highly recommend this absorbing drama.
5 people found this helpful

andi clatworthyReviewed in the United States on June 21, 2020
1.0 out of 5 stars
A true dog.
Verified purchase
Don't bother. This is a total waste of time.
2 people found this helpful

SargintrockReviewed in the United States on June 19, 2013
5.0 out of 5 stars
Baby Boomer Deja-Vu
Verified purchase
I was 10 yrs old when this era took place and I was born in Miami,Beach to boot. I played in the Fountain Bleu pool and watched the glitz and the glamor, upclose and personal from the perspective of a starry-eyed 10 yr old!
It doesn't get any better than this for ringing your chimes and rattling the bars of your crib, if ya get my drift. Every show seems to trigger long lost emotions and rememberances!
I've already bought season one and hoping for a long run like the "Sopranos" will ensue. Since "Havanna" is my favorite movie, I can only urge my compatriots to watch it again until a new episode appears.
This is Top Shelf filmmaking at its best!!!!!!!!!!!!!!!!!!!!!!
2 people found this helpful

M. EddyReviewed in the United States on June 30, 2013
5.0 out of 5 stars
Pure "Magic"
Verified purchase
this series on Starz was a grabber from the jump. Very Scorcese-esque. Terrific acting. Has a fantastic look - Miami in the early 60's - all pastels and sunlight and dark intrigue. Characters seem lived in and close to archetypes you might have seen before - but fresh and new and wonderful to watch in their world of high class hotels and the rich and powerful. I didn't stick with the addition to my cable lineup long enough to see more than the first 4 episodes - so jumped on the DVD set and watched it all. Great stuff. All in time for season 2 to be starting up. Might not be able to wait for the DVD season this time around.

Magic City brings us a stylized look at 1959 Miami Beach with new dictator on the block Fidel Castro just in power. Thus there is a bit more sizzle than steak. The plot is decent. The bad guys are halfway decent bad guys. The casting is magnificent. I must call out to actor Olga Kurylenko for her fine performance as the boss's wife, Vera Evans. I pick on her only because she looks too beautiful to be a good actor, but she is in fact quite good. You could say that about a few other goddesses in this series as well. In the second season they bring in well aged Jimmy Caan, who has apparently fully healed from the injuries he suffered in Misery.

This series passes the time, offers a lot of eye candy and the now nearly ubiquitous and mandatory full nudity and simulated sex (which ALWAYS looks simulated). It feels like they really spent some money on the production. The resort owner's 50's style panoramic office I absolutely covet. If I had the money I would have that office recreated to the last detail and just hang out there. I actually live on the ocean so it would be pretty cool. Pretty, pretty, cool.

So what's wrong here? Perhaps the writing and pacing. Things happen a little too fast at times. Conflicts are brought to a head before they've had a chance to percolate.. to cook down.. to fully enroll the audience in the suspense and get us emotionally involved. Twists in the plot occur without the proper foundation. For example in the final episode of season one a girl is about to get murdered in her bathroom, but suddenly a man comes through the door of the cabana and kills the would-be murderer. We know all the characters in the scene but we don't no why that one character showed up and stopped the crime in progress. We never saw the set up for how and why he knew where to go there. So with scenes like that pulling you out of the show it's harder to care... harder to get fully invested.

Although the cast is wonderful and the acting good, the writers employ many stereotypical characters, and rather than reshape the well-worn cliches into something fresh, they tend to 'lean in' to the stereotype, rendering a caricature as opposed to a fully rounded character.

My only other beef with the series is that the so-called original score that opens the show is not all that original. It strikes me as a not so well disguised rip off of Henry Mancini's Lujon ([[ASIN:B0013AMR0M Lujon]]). The other music is superb though, and they changed the opening score in season 2, so who knows, maybe someone else noticed too.

It's a series I happily watched once. Maybe again, not sure. I am reminded of an old crime drama called CRIME STORY (Dennis Farina) that was set in this general period. It can be viewed repeatedly.
4 people found this helpful

Linda LReviewed in the United States on March 6, 2015
4.0 out of 5 stars
Gritty Magic
Verified purchase
Great moods and memories in this production...certainly derivative of The Godfather--even the music. But the non-stop display of gorgeous women, impeccably dressed and made up is a bit over the top...I mean, they're great to look at, but it's all fantasy land. People occasionally thought about things other than sex in the 60's...but it does have some intriguing story lines, lots of eye candy, and a lot of swing.
2 people found this helpful
See all reviews
Back to top
Get to Know Us
Make Money with Us
Amazon Payment Products
Let Us Help You
EnglishChoose a language for shopping. United StatesChoose a country/region for shopping.
© 1996-2021, Amazon.com, Inc. or its affiliates