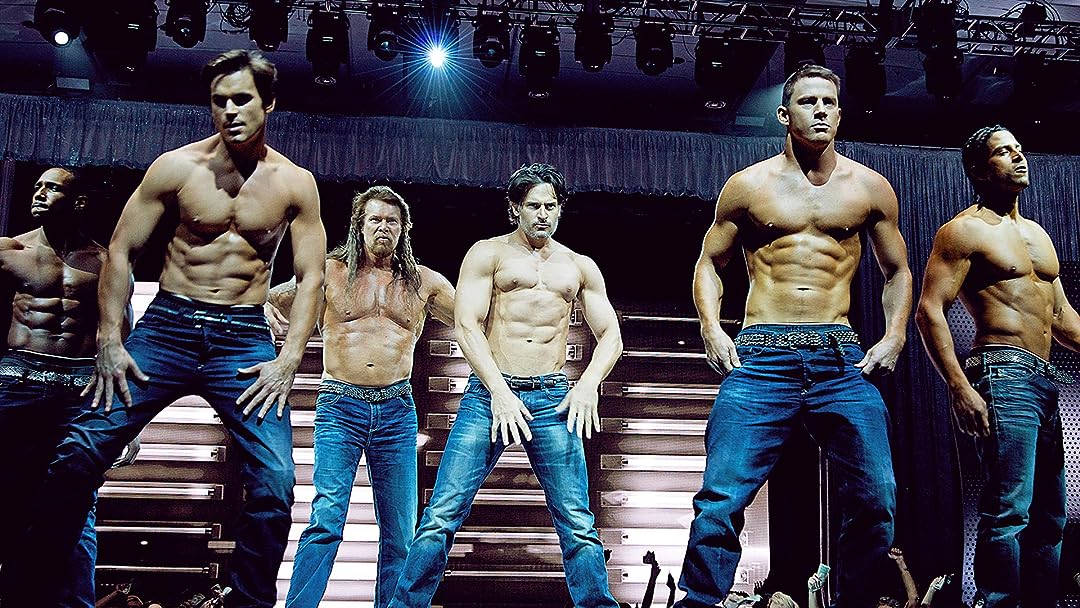 (9,059)5.61 h 55 min2015X-RayR
Three years after Mike bowed out of the stripper life at the top of his game, he and the remaining Kings of Tampa hit the road to Myrtle Beach to put on one last blow-out performance.

Chris BReviewed in the United States on November 8, 2015
3.0 out of 5 stars
Your wife will love it.
Verified purchase
Really great movie. For my wife. She rented this for 24 hours and watched it three (that's 3) times. For myself, I spent the time stripping. Stripping the paint off of my shed and repainting it. I also had to scoop up after the dog. A good time had by all.
243 people found this helpful

Under the surface it’s surprisingly forward thinking. Many of the actors, and some characters, are in the LGBT community and the subject is treated with respect. They handle the subject of aging well. They’re pretty respectful of women in general. Powerful people of color and women are portrayed. And they all have a healthy male friendship. It’s kinda wild seeing that in a movie about male entertainers.

But... if you’re looking for a movie where hot guys dance to early 2000s - semi modern hits this is the one. It’s kind of long and more drawn out than it needs to be, but love the cast and it’s pretty good entertainment.

A.J.Reviewed in the United States on September 19, 2017
4.0 out of 5 stars
Yes, you want it at least once
Verified purchase
Don't listen to anyone else. Magic Mike XXL is the bomb, and this one is better than the first for one reason and one reason alone: Jada Pinkett Smith. Channing Tatum owes JPS 5evr because XXL is nothing without her. That liquid walk, that growl, her casual authority when she insists that the men take care of the queens. Please MC my life, JPS.

The little piece of fluff trying to step to Tatum is out of her league.

Thank goodness they found some more men who can seriously dance for this one. The moves are hawt.

Donald Glover is a delight from those puppy dog eyes to those dimples to those skinny abs. Andie MacDowell is pitch-perfect as a sarcastic wealthy Southern divorcée, and Elizabeth Banks seems perfectly at home heading up the convention, her performance a little bubblegum pop of flavor. The crew get to have some personality finally, and their affection for each other makes XXL warmer and sweeter than the original. (I want to say "Parev!" to my compatriot, Big Dick Richie.)

While I appreciated the undercurrent of economic desperation fueling the escapism offered in Dallas' club in the first movie, that theme never matured enough to take it seriously. This movie doesn't even try to be serious--the comeback is such a hoary cliché--but its insistent message that every woman, regardless of age, size, or appearance, is deserving of male attentiveness and her own pleasure seems radical in the Tinder age. So does its devotion to male friendship and its openness about steady male platonic love--so different from the more giddy bromances.

LizReviewed in the United States on April 18, 2020
5.0 out of 5 stars
Low-Key the Most Feminist Film in Years
Verified purchase
Slightly disappointed to say, this film is not only a fun buddy road trip movie, it's also low-key one of the most feminist films I've seen in years. Yes, male strippers are a nice plus. I've no complaints.

But what really draws me in is the multiple independent businesswomen who lead the story. It not only passes the Bechdel Test with flying colors, showing women who influence each other more than the men around them do; it also includes positive, and more impressively sex-positive, representations of women of a certain age and women who are plus-size.

I genuinely find this move to be a re-watchable, enjoyable, well-played, super fun flick for any girls' night, night alone, or date night (a man not willing to put my needs first long enough to watch this movie won't last long with me -- and my boyfriend says he actually enjoyed the road trip part). But screw boys. If you wanna watch it, do. You won't be disappointed.
6 people found this helpful

LETHA DUNNReviewed in the United States on September 9, 2018
2.0 out of 5 stars
There's no there there.
Verified purchase
I don't know. Maybe I just don't drink enough. Or maybe you need to be sexually frustrated to enjoy this movie. I don't think the dancing is especially sexy -- all that gyrating just reminds me of my dog humping air.. And it doesn't have artistic value. But there is something nice about smiling, handsome men having fun. Mr. Tatum is nice to look at and has some charm. And Ms. Pinket-Smith has something going on with her girl power. These are the only reasons why I gave it more than one star. But it's really about making money, isn't it? Meh. Okay, I've already given this movie enough of my time and thought. Next.
7 people found this helpful

Miss AngelaReviewed in the United States on October 10, 2015
2.0 out of 5 stars
Aagghh!
Verified purchase
Oh my lord. I wanted to watch this movie! I could not wait till it came out so that I could watch Channing Tatum and Twitch dance their booties off! Boy oh boy was I disappointed! Ok they did dance but it took until the last 15 minutes to see it and for the hour and 45 minutes prior to that, I was just about bored out of my mind! What a stupid, stupid story line! I mean, realistically I did not expect genius storytelling or a Pulitzer winning story of any kind but I did expect a little more than completely predictable, stale, boring, not funny at all dialogue. I will admit that in the first 20 minutes of the movie there is a scene where Channing Tatum randomly busts out dancing and that was well choreographed, well danced and exciting to watch. But when you finally get to the ultimate stripper dancing towards the last half of the movie, which by the way is supposed to be the climactic part of the movie, it is anything but.. In fact it was very anti-climactic. One of the dancers literally just stood on stage and fake painted a painting in a g-string. All the while the audience was going wild and cheering and going crazy over it! How hard was that! If I would have been in the audience, I would have been throwing apples and banana peels for some old ass half naked, fake tan, ugly man, with a fake ponytail standing on stage doing absolutely nothing! And then there was the scene where another stripper comes out and sings which was good singing, I will admit but not the least bit sexy! I don't know how much they paid the extras but they must have paid them alot to get them all fired up over some ugly old naked man standing still and some semi good looking guy crooning a song in a g-string! Channing and Twitch should have had much better choreographed scenes than they did have. I cannot tell you how disappointed I was in their dance sequence. I personally think that they are two of the best hip hop dancers around, especially Twitch, and whoever choreographed this just really dropped the ball! Stick with the original Magic Mike. It was far better than Magic Mike XXL.
2 people found this helpful

BReviewed in the United States on October 23, 2015
3.0 out of 5 stars
Well...
Verified purchase
What can I say? I shamelessly watched this because I knew it would be soft core lady's smut. It did not disappoint in that factor. Much like the first film the story line and character development are laughable, but we ALL know that isn't why you watch this movie. The dance moves are provocative and the cast is smoking hot. Some of my brain cells died from watching this, but they were happy when they passed.
33 people found this helpful

J LongReviewed in the United States on September 5, 2019
2.0 out of 5 stars
A little too over-played for my taste
Verified purchase
I read an article that had this on a list of “the ten best movies” - for some time period I don’t recall. I thought it was very sophomoric, predictable and full of unlikely-to-ever-happen moments. However, kudos to the guys for learning the dance moves, especially Channing Tatum- he had some scenes that were parkour-like moves, and showed great agility... however, 2/3 thru I started fast forwarding, it just didn’t hold my interest that much.
See all reviews
Back to top
Get to Know Us
Make Money with Us
Amazon Payment Products
Let Us Help You
EnglishChoose a language for shopping. United StatesChoose a country/region for shopping.
© 1996-2021, Amazon.com, Inc. or its affiliates