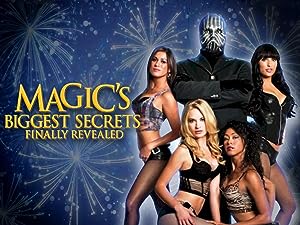 Season 1
(11)
202013+
The Magician's Sacred Code of Silence Is Broken Forever! Never before has a magician dared to reveal the dark secrets behind the world's most mystifying illusions. But now, one known only as "The Masked Magician" defies his fellow conjurers to disclose on television the tricks that have captivated audiences for centuries!

yankee2Reviewed in the United States on May 23, 2012
4.0 out of 5 stars
magic will survive
Verified purchase
It's funny how some people here cry "he broke the code!" and give it 5 stars, and others make THE SAME CRY, and give it one... I don't think the magic in magic is entirely in not knowing how it's done, more, its in the presentation. As demonstrated every day, when we enjoy fiction and theater, we CAN suspend disbelief long enough to enjoy an artistic or spectacular presentation. We know that is NOT Richard II up there on that stage, and we know that magic is an illusion, but we allow ourselves to believe it is, at least for the moment, what it seems to be.

In other words, though somewhat demystified by this series, I think magic will survive. As someone else here said, magicians will continue to invent ever more amazing tricks, which will continue to astound audiences for a long time to come. Those of us who wish to keep the most magic in magic need not watch this expose.

Quacks0Reviewed in the United States on July 21, 2008
5.0 out of 5 stars
A wonderful program, clearly presented, and interspersed with delightful tidbits of witty humor.
Verified purchase
I agree with the reviewers who say that the magic industry may have actually been HELPED by this program series... many of the people who were previously unhappy with magic because they couldn't figure out how the tricks were done (and so they didn't want to go and see magicians perform because it would just have been puzzling and upsetting to them; I know because I myself am one of those folks) may now like magic better after having seen this program about how some of the tricks are done, and so they may now feel inclined to go and see magic shows. You see, folks, entertainment is a "whole-world" business, and as such, it must create various types of material so as to cater to every facet of the population. As I say, there are many people --- yours truly included --- who DO want to know how magic tricks are performed... we actually DISLIKE not knowing how a trick is done, and so we may not bother watching magicians because of the frustration and resentment we feel at not being allowed to see the secrets behind the illusions. So this program's magician is merely bowing to that comparatively small but sizeable and enthusiastic segment of the audience who so desperately DOES desire to know what the secrets are. You can't please all the people all the time, and I say, let those of us who do like to see how magic tricks are performed have our little shows that give us what we want --- nobody said you had to watch them, too! It's just like anyone who produces documentary movies about anti-Christians, devil-worshippers, cannibalism, etc. --- certain people are interested in these things, and so they are grateful for any media that covers what they like. The rest of us should not criticize the producers of these "alternative" movies, because, again, the rest of us don't have to watch them if we don't want to. Let's not criticize media coverage of a certain subject just because we don't happen to agree with it... this is a free world, remember? "Live and let live", you know?
2 people found this helpful

jpReviewed in the United States on January 26, 2014
2.0 out of 5 stars
Eh,
Verified purchase
Save your money and spend it on a good magic tutorial video - Michael Ammar, most anything from Penguin... simple things you can master and perform anywhere. Unless you own your own forklift, the kind of stuff in here is interesting but you won't be using most of it.

D's MomReviewed in the United States on June 26, 2016
3.0 out of 5 stars
Narration is sexist
I'm watching this right now on Netflix. So this review isn't about the show itself, but rather the commentary. The commentary on the video is sexist and pervy! The magician assistants are very pretty and wearing revealing outfits. But what is disturbing is that every magic trick had a comment from the narrator. Things like, "well that's one thing to do with that body". Or replaying a girl running in slow motion. Or talking about the girl when she's in a provocative position (which is often since they are squeezing into a step or a barrel).
I think the show itself is good and my kids enjoy watching the it. I just have reservations with them watching it because of those comments. Yuck!
14 people found this helpful

Johnny FutureReviewed in the United States on August 30, 2013
5.0 out of 5 stars
Copyrights?
I don't think any person has copyrights to any of the tricks shown on the video. Give Valentino more credit....he isn't stupid. He showed old tricks.....these aren't the more modern-day illusions. Besides......(and this message is for all you haters out there)....you can go to youtube and watch videos on how to perform illusions and purchase books on magic tricks. It is no different. If Valentino should be banned, then the books and videos from the "other" magicians should be banned as well. They are just as guilty as Valentino. It isn't a crime for God's sake.....get over it.

GangstaLawyaReviewed in the United States on May 1, 2008
5.0 out of 5 stars
Very Entertaining
I'm sure the magician's guild has an enormous inventory of tricks. Even if the tricks here on this volume represent a trifle, they are nevertheless great tricks. The fact they are explained in the video doesn't mean the other tricks in that inventory are also subject to easy explanation.
One person found this helpful

Susan WanamakerReviewed in the United States on October 14, 2021
5.0 out of 5 stars
Why isn't this back on prime?
This whole show was available on here for free on Prime. Why hasn't this been fixed?
See all reviews
Back to top
Get to Know Us
Make Money with Us
Amazon Payment Products
Let Us Help You
EnglishChoose a language for shopping. United StatesChoose a country/region for shopping.
© 1996-2021, Amazon.com, Inc. or its affiliates