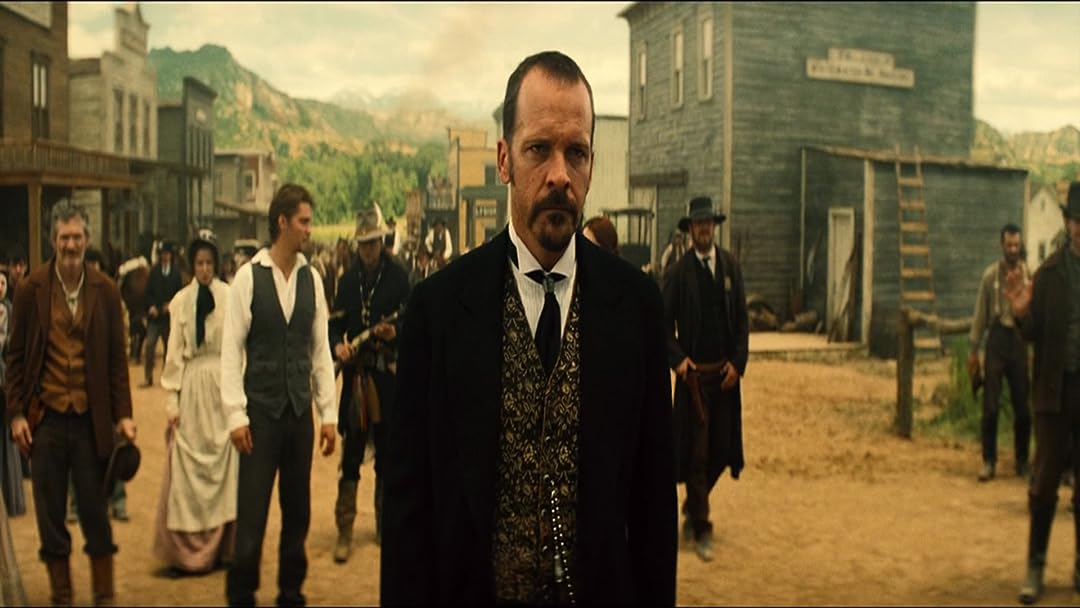 NotvinnikReviewed in the United States on September 25, 2018
4.0 out of 5 stars
A "remake" that was worth making.
Verified purchase
Over 5000 reviews already. I haven't read them all, and don't expect many people to scroll down to this one. I'm writing this review more for myself.

But somewhere in all those reviews, someone has probably noted that the "original" Magnificent Seven was itself a remake, of Kurosawa's "Seven Samurai". Each of those films worked perfectly well in its own way, each can be enjoyed on its own terms. And despite the fact that one takes place in 16th century Japan, and the other in 19th century Mexico, the stories have great similarities, and a common theme.

This 2016 remake works because it finds its own original way to address that theme. Once again, a group of mercenaries finds moral purpose in helping ordinary people defend themselves against a remorseless enemy. The actual situation is a bit different than in the previous two films, and the head villain is not merely ruthless, but positively psychotic. Once again, though, compromise is not an option, only fighting or total surrender. But it's hard to fight without at least a few people on your side who actually know how.

The entire cast is good. Denzel Washington always makes the most out of his roles, of course. Vincent D'Onofrio is excellent as the mountain man who at first seems almost to have forgotten how to be human. Haley Bennett almost steals any scene she is in as the indomitable widow who seeks righteousness, but will settle for revenge. And Ethan Hawke hits just the right notes as the man who has a great reputation, but fears he can no longer live up to it.

Don't think remake, then, although there are obvious nods to the 1960 film, not least when the credits begin to roll. Knowing the previous films may add to your appreciation of this film, but it stands very well on its own.

VictoriaReviewed in the United States on August 10, 2018
5.0 out of 5 stars
AN AMAZING MOVIE
Verified purchase
I loved the storyline and the character development. But what was beyond extraordinary is the acting by Denzel Washington. His presence just automatically encompasses the whole space of the movie yet he never allows excellent acting to overshadow the supporting cast. He is divinely designed to tell a story through his superb acting skills. He made this period piece come alive and I don't like western movies--never did. However I loved this movie. I'm now committed to watching every single film he has acted in. He is way beyond the best acting that has ever been experienced in the 20th and 21st century. He is beyond the best of the best like Michael Jordon, Lebron James, Serena Williams and Michael Phelps. They continue to reset the bar that remains untouchable--it's an excellence that has everyone paying for the enjoyment of their craft.
38 people found this helpful

Zachary LittrellReviewed in the United States on November 23, 2018
3.0 out of 5 stars
Turn your brain off, your sound up, and have a good time
Verified purchase
The Magnificent Seven knows exactly what you came for: the final, long shoot-out where seven gunslingers take on an impossible army of bad dudes--and win. I kinda admire that it pretty much hustles through all the setup so it can get its heroes to their bloodbath ASAP.

It's not a complicated movie by any stretch, but for its flaws, it succeeds on account of the sheer charisma from its actors. Kinda sad that the Seven aren't given much more than a quick paintjob in characerization (Red Harvest is literally just the "Native American one"), especially when you have great actors with some nice chemistry. Saarsgaard's villainous Bogue gapes his mouth with quivering elation, while Ethan Hawke's puppydog eyes betray Goodnight's image of the deadly sharpshooter. But there was a palpable moment during the finale, when various of the Seven get their heroic redemption moments, where I wondered out loud, "Who the hell are these guys?" And too often the movie just responded with a wink and a quip.

It's the script that let these guys down -- even calling this the Magnificent Seven was a mistake. The writers missed out on what made the older Magnificent Seven a great film (not even mentioning the legendary Seven Samurai). Yul Brynner and the rest of the older Seven were grimier, desperate men just barely two notches above the actual bad guys. They broke themselves fighting for ungrateful people. By comparison, Washington and his gang are just some good ol' lovable boys with bumps and bruises, with robust support from the good town. Hell, now that I think about it, it's all so wholesome, the town seems to have only one prostitute!

All that said, it's a movie built to have fun. Will it be preserved for cinema history? I'll eat my hat if that ever happens. But just enjoy the darn thing.
25 people found this helpful

mosengReviewed in the United States on September 20, 2017
4.0 out of 5 stars
Finally, a movie worth watching!
Verified purchase
I have seen three bombs in a row over the last two weeks and two of them I paid to watch. So it was refreshing to sit down to a good western with good actors. I was expecting a let down compared to the 1960 version but that wasn't the case. I would have actually paid to watch this movie. You can certainly read some of the other reviews but if you have a couple of hours, it's not a bad way to spend them!
50 people found this helpful

BadgerboyReviewed in the United States on December 2, 2018
1.0 out of 5 stars
Poor remake
Verified purchase
Not close to the original...good guy bullets can't miss. Characters are not believable. It seems today's movies are action and noise, noise and action, for the sake of noise and action. Just go watch the original again.
23 people found this helpful

CHAPSReviewed in the United States on January 28, 2020
1.0 out of 5 stars
Denzel and anotherTURKEY
Verified purchase
After his FLOP at The Manchurian Candidate and The Taking of Pelham 123, I can't imagine why Denzel Washington would lend his name to another TURKEY. This Poor attempt at remaking a classic western likely had Akira Kurosawa and John Sturges turning over in their graves. The original Magnificent Seven, taken from Kurosawa's The Seven Samurai was a masterpiece with a fine cast, largely made up of young Turks (Bronson, McQueen, Coburn) just coming into their own, and supported by classic actors; Eli Wallach, Yul Brynner and Brad Dexter. To add to that: who could forget Horst Buchholz (a German) playing CHICO, the wannabe Mexican pistolero. The characters were also people that you could empathize with, each with a specific skill or malady of his own.
This 2016 version had characters who were basically no more than just "talking heads", that I could care less about. The Leader of the "7" had the charisma of a radish and the "BAD GUY" came across as phony as a $3 bill!
To top it all off none of these so called gunslingers seemed to know the first thing about handling a six gun.
Just a waste of time!! If you want a good western, with likeable characters, great action sequences and Eli Wallach as "Calvera", check out the original "7", or you can "ask the old man, he'll know what to do!"
I gave this a one star rating because there was no lower choice!
6 people found this helpful

G. DixonReviewed in the United States on May 1, 2021
2.0 out of 5 stars
Dismal Remake
Verified purchase
I was truly disappointed with this remake. There was no character development. The script and directing was way below par. There was a lot of wasted talent .
Eli Wallach absolutely nailed his villainous role in the original. That greedy guy in the remake is just an afterthought. The town people would not inspire anyone to risk their lives for them. Even the eye candy was bland.
The original captivated you from the beginning and refused to let go. At least five of the seven in the original were intriguing. The villagers personas were developed and prompted a desire to assist them.
The original Magnificent Seven is an ABSOLUTE CLASSIC. I must mention that excellent soundtrack by Elmer Bernstein, and how it elevated the action scenes. The original is such a great movie. I watched my Blu-ray of the original after watching that dreadful remake.
My thoughts were reconfirmed the original Magnificent Seven is an ABSOLUTE CLASSIC, and that remake is such a dreadful movie.
2 people found this helpful

David S.Reviewed in the United States on October 9, 2017
5.0 out of 5 stars
Remakes usually suck, but this one doesn't
Verified purchase
I almost always find remakes to be a disappointment. I'm glad that this remake of the Magnificent Seven is an exception. I've always loved westerns since I was a boy and the original Seven is one of my favorites. I was hesitant to watch the remake, thinking that it wouldn't do justice to the original. But I enjoyed it very much. Denzel Washington was an excellent choice for the lead and the supporting characters were a great mix.
39 people found this helpful
See all reviews
Back to top
Get to Know Us
Make Money with Us
Amazon Payment Products
Let Us Help You
EnglishChoose a language for shopping. United StatesChoose a country/region for shopping.
© 1996-2022, Amazon.com, Inc. or its affiliates