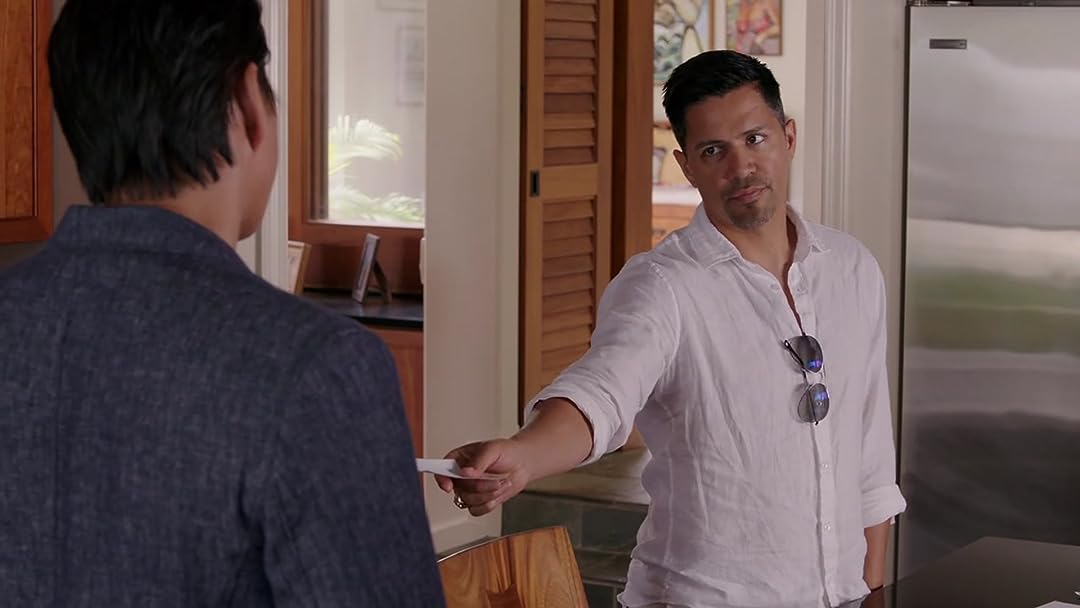 (1,622)
2019X-RayTV-PG
Magnum P.I. is a modern take on the classic series centering on Thomas Magnum, a decorated former Navy SEAL who, upon returning home from Afghanistan, repurposes his military skills to become a private investigator.

Tony WrightReviewed in the United States on July 26, 2018
2.0 out of 5 stars
Good show, bad DVD set
Verified purchase
The TV is much better than I remembered it, which superior writing, acting, and directing. Surprising in a show from the 1980's. While I would recommend the show, the DVD set leaves a bit to be desired.

The Good: All the DVDs are contained in a single case, are easy to access, and are well made.

The Ugly: Once you choose an episode, you have to sit through a "teaser" that gives away the plot of the episode that you are about to watch. It's annoying and you can't skip it. I hated this feature!

JoReviewed in the United States on January 22, 2019
5.0 out of 5 stars
Best episode of the new Magnum PI yet
Verified purchase
This was one of the best episodes of Magnum PI yet. I really liked Ken Jeong and Halston Sage's guest roles. They were very funny, and I would love to see their characters again.

The episode got a little dark at points, I really wish this serious could cut out some of the depressing, tear-jerking stuff (like Magnum emotionally discussing his mother dying while he was in the military) and just focus on being fun and light-hearted. I really like the characters, especially Higgins, and when the show doesn't take itself too seriously, it can be a nice diversion.
6 people found this helpful

.Reviewed in the United States on December 1, 2018
3.0 out of 5 stars
The Actors Were Good, The Writing Sucked...
Verified purchase
I have not read any of the other reviews, so I don't know if others saw the glaring mistakes that the writers made...

I wonder how many Prisoners of War get put into holding together and just happen to still have in their possesion: a retro-butane filled lighter and bullets in their pocket with which they can cauterize wounds?
I wonder how many ex-intelligence agents are somehow able to log onto their laptops to download real-time satellite imagery after leaving their agencies?

Where in the world did they find these script writers?

Kudos to the actors who kept straight faces while reading their lines and delivering decent work despite the script. I don't know if this show got picked up for another season, but if I worked in said capacity at the studio that bought this remake...the show would have to be a lot better than this pilot before I paid for another season.
Sad.
3 people found this helpful

H. BalaReviewed in the United States on August 28, 2020
4.0 out of 5 stars
Couldn't the guy from Blue Bloods play Magnum?
Verified purchase
I still don't favor this remake of Magnum P.I. over the original, but it's steadily growing on me, and I've quit maddogging Jay Hernandez. Jay's likable but, in my opinion, lacks Tom Selleck's presence and easygoing charm and, most notably, his iconic mustachio. I'm still not sold on Rick and TC, but I am on Higgins. It's not even controversial anymore when new tv shows that revamp the classics "Starbuck" their characters. I will say that the reinvention of Higgins was THE best surprise. It's now Juliet Higgins (Perdita Weeks) who is the stern British majordomo of Robin's Nest. She infuses a new dynamic to the classic squabbling that went on between Magnum and stuffy old 1980s Higgins. And, it turns out, she's just as kicka-- in the field as Magnum. It's what happens when a lady has a murky past with MI6. What hasn't changed is that Higgins still has those two mean dobermans that love to treat Magnum like he was a chew toy.

If the networks are still out of ideas and still looking to resuscitate television shows from the '80s, my two cents is why not redo Hardcastle & McCormick or B.J. and the Bear or The Misadventures of Sheriff Lobo? Those were my must-watches when I was a young 'un. Anyway, this reboot of Magnum P.I. is good enough that I DVR'd the series. I'm not mad at the slick action sequences, them red Ferraris, a tropical paradise for a backdrop, a mustacheless Thomas Magnum who is now an ex-Navy SEAL, and an even more boss Higgins.

A. PopeReviewed in the United States on December 13, 2018
5.0 out of 5 stars
No, It's not the original
Verified purchase
Just like the reboot of MacGyver and Hawaii 5-0 aren't the same as the originals, this one isn't a carbon copy of the original either. It's fun, it's goofy, it has some serious moments, and while it's still seeming like the actors are getting used to their parts, there's definitely potential for this to be as good (not the same) as the original. Kinda hope to see Tom Selleck on here.
8 people found this helpful

Slacker111Reviewed in the United States on October 29, 2018
3.0 out of 5 stars
Weak
Verified purchase
Definitely lacks the feel of the old Magnum and while that could have been ok if done properly, this show just lacks something. The show is just ok all the way around. Ok cast, ok dialogue, ok plot, and ok action. Nothing really brings it up to the good level. I will continue to watch it but I wish I hadn't bought the season pass and had just viewed it after it became available at Netflix, or Hulu as part of the streaming service..
7 people found this helpful

W. WinklerReviewed in the United States on August 13, 2020
5.0 out of 5 stars
Very, very good and very faithful to the original 1980 TV show
Verified purchase
I started watching the original Magnum P.I. from 1980 and got through most of the first season when I remembered they made a new series, so I bought the first season of this and watched it. There are so many nods and Easter eggs, as well as straight up plot rip-offs, from the original show! And I don't mean that in a bad way, I mean that in an homage way. You can tell the writers and producers really studied the original series and updated it for today, but kept the same dynamic of Rick, T.C., Magnum, and Higgins. Swapping Higgins gender works brilliantly and they even have the dogs, Zeus and Apollo. Do yourself a favor: watch the first season of the original and then watch this. You will be delighted.

ChrijeffReviewed in the United States on October 2, 2012
4.0 out of 5 stars
A detective in Paradise
Verified purchase
Thomas Magnum (Tom Selleck) was one of the best of the flock of memorable TV detectives of the 1980's, and this is the first volume of his adventures. When we first meet him in the two-hour pilot, "Please Don't Eat the Snow in Hawaii" (yes, the title makes sense, but only after you've watched it), he's a 34-year-old private investigator (he hates to be called a "private eye") who served as a Navy SEAL in Vietnam (and is still occasionally troubled by dreams and flashbacks), then in the Naval Intelligence Agency at Pearl Harbor--two experiences that have made him cynical about most things official--before he "beached himself" a year ago. Somehow he met Robin Masters, a famous and fantastically successful novelist with an estate on the island, and was offered free occupancy of its guesthouse in exchange for acting as backstop security for Sgt.-Maj. (Retired) Jonathan Quayle Higgins III (John Hillerman), the self-proclaimed "major-domo"--actually a glorified caretaker--of the place. Once there he contrived to also obtain use of Robin's red Ferrari, though he often has to wheel and deal with Higgins to keep it. Though most of his off-camera cases seem to be low-paying divorce jobs--at one point we find out that he hasn't "had $200 in his checking account since he left the service," though what he spends his money on isn't clear--he has his share of intriguing and dangerous ones, and these are the focus of the series. In solving them he often calls on two former teammates from the war, T.C. (Roger E. Mosely), who has translated his experience as a chopper pilot to ownership of Island Hoppers, a tourist flying service, and Orville "Rick" Wright (Larry Manetti), a cocky, wiry, street-wise native of Flatbush, formerly T.C.'s door gunner, notable for his shady contacts and ability to find out almost anything; in the pilot he owned a disco, Rick's Club Americaine, but after the series was picked up he was made manager of the King Kamehaha Club, a private outfit on the beach where Magnum--as the permanent guest of Robin Masters, who's among the most prominent members--spends a lot of his time.

Like all the detective series of its era, MPI (as it was called by its fans) had to find something to make itself unique among a crowd of other such shows, and what it chose was the relationship between Magnum and Higgins. Higgins, despite having been only a noncom, was clearly reared an aristocrat (in future seasons we learn that he attended Sandhurst, the British equivalent of West Point), and has a tendency to look down his nose at Magnum, whom he regards as a lazy, uncultured freeloader--which is unjust, because while Magnum does prefer to live in faded jeans and aloha shirts, he runs the eight-mile beach route from the estate to the Club every morning, swims, paddles a surf-ski, plays sand volleyball and (when he can con Higgins into letting him use the estate courts) tennis, looks quite dashing in a suit, is cool-headed in moments of peril and capable of fast, graceful action--it's a treat to watch him move. Higgins also has what Magnum considers an annoying habit of launching into long tales of his army service during and after World War II at the drop of a hat ("This reminds me of...," he'll begin, and you never know whether the story will end up perilous or humorous), and flatly states that he doesn't "like the way you live...[or] the way you drive [the Ferrari]...[or] your friends..." He and Magnum are perpetually locked in conflict over the car, Magnum's use of the estate wine cellar/tennis courts/hot tub/big-screen TV, and Higgins's two Dobermans, Zeus and Apollo, who share their master's dislike of him. Yet as the series proceeds, Higgins apparently finds Magnum growing on him: he once says that he's "glad you're all right," and another time, after Magnum has agreed to move out in order to get Higgins's help in clearing T.C. of a smuggling rap, Higgins not only provides the help but ultimately maneuvers him into staying on.

Magnum is a slightly quirky, very attractive, soft-spoken but definitely masculine character who often provides voice-over narration that brings us up to speed on his thoughts on a situation or what's been going on when the camera wasn't looking. The series exteriors were filmed on location in Hawaii, and some of the scenery--especially the sheer cliffs past which T.C.'s chopper sometimes flies--is incredible. The set includes three double-sided discs and a single, containing all 18 first-season segments (including the pilot, aired as a two-parter), plus "Kiis Don't Lie/Emeralds Are Not a Girl's Best Friend," the crossover with [[ASIN:B001JTRKHW Simon & Simon: Season Two]] (which isn't on the latter) and "Echoes of the Mind," a two-part fifth-season episode featuring Sharon Stone, which is also available on the Fifth-Season set.
16 people found this helpful
See all reviews
Back to top
Get to Know Us
Make Money with Us
Amazon Payment Products
Let Us Help You
EnglishChoose a language for shopping. United StatesChoose a country/region for shopping.
© 1996-2022, Amazon.com, Inc. or its affiliates