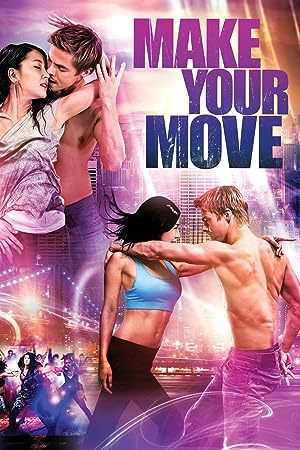 (390)5.61 h 49 min2014PG-13
From the co-writer of STEP UP and SAVE THE LAST DANCE. When Donny (Derek Hough, TV’s “Dancing With the Stars”) and Aya (Korean pop star BoA) meet at an underground club, they fall in love, but find themselves caught in the middle of a bitter rivalry where they must choose between family ties or their love for each other.

monneblamb1301Reviewed in the United States on October 7, 2014
5.0 out of 5 stars
Dancing in Motion
Verified purchase
If you have read his book Taking the Lead you will enjoy this movie more. I did not know of his life in London {that is in the book] and it is very interesting with his life in another country & the book will tell you why. It was the first I had seen him tap & that was the icing on the cake. He is amazing and & I wish I were 40 years younger...haha. I keep wondering what more we will get from this young, adorable, blonde , blue eyed young man. Sometimes it is hard to decide what book to buy or DVD to get but I concentrate on the person first & I do not go see a movie because I read the book and rarely will I read the book after I have seen the movie. While, yes, I am being a critic here but I do it as a common person & do not get paid. I am opinionated & outspoken but always honest. Do not ask my oponion unless you want the answer. I will not give you anything but the truth on these reviews...after all it is your money, too. Do it! Get this movie. No it is not an Oscar possibility but I have seen bad acting rewarded and good shunned because I have bee going to the movies & reading books a long time. Good luck!
6 people found this helpful
Report abuse

BookshireCroneReviewed in the United States on May 8, 2017
2.0 out of 5 stars
Too much tap dancing. Not enough of everything else to keep you from fast forwarding
Verified purchase
I'm old, so you'd think that I'd like tap, but I really prefer the dancing in Step up with Channing Tatum.
Derek Hough is a good dancer, but only a so-so actor & the dancing that was most interesting was when he was dancing with Lee & there wasn't much of that. The girls on the drums were ok, but not riveting.
There isn't much plot so you'd think that they'd stuff the movie full of dancing, but sadly there are only a few interesting dance numbers, those with Hough & Lee.
The rest of the movie is grade C

Amazon CustomerReviewed in the United States on July 24, 2014
5.0 out of 5 stars
A Must See!
Verified purchase
I watched this movie in the theater while vacationing for a week in Arizona. LOVED IT SO MUCH that I watched it again before leaving! I couldn't wait to pre-order the DVD, and it arrived right on time. I eagerly sat down to watch it. I have watched the movie several more times now since it arrived.

The dancing in this movie is beyond fantastic. It's A-M-A-Z-I-N-G. The combination of tap, hip hop and taiko drumming, called COBU, is so novel, I found myself begging for more. I also found myself engrossed by the story line between "Donny", played by handsome and multi-talented Derek Hough of Dancing With the Stars, and "Aya", played by beautiful BoA Kwon, the Korean Queen of Pop.

The DVD is a must have, just for the bonus features alone. The DVD included deleted scenes, some of which I can't understand why they were deleted. They would have added significantly to the story line. The Bonus section also showed scenes from the making of the movie, concentrating on how Derek Hough learned to tap dance in just three months for this movie (kudos to him), and on his dance relationship with his co-star BoA. Prior to this movie, I had never heard of her. She's a singer, but what a dance talent she is!

Overall, I highly recommend this movie. Duane Adler, the screenwriter and director, outdid himself in this flick. Loved it more than his other Step Up movies. Too bad this movie was not promoted properly. It was an independent film with a limited release. Should have been shown all over, in my opinion.

Steve HReviewed in the United States on June 5, 2019
2.0 out of 5 stars
So-so story, decent dancing, bad camera work
Verified purchase
Derick Hough makes heterosexuality look unconvincing in this potboiler. There's some decent enough dancing, although the camera focuses more on the dancers' faces than on their legs and feet, so it's not so much "dance" as it is "bobbing heads" but there you go. I passed it along to my sister-in-law who is sentimental and uncritical. Maybe she'll think it worth a watch.
2 people found this helpful
Report abuse

warrenReviewed in the United States on August 24, 2020
5.0 out of 5 stars
the five stars are for talent
Verified purchase
there is so much talent in this film. the dancers and musicians are extraordinary. choreography magnificent. if this were the forties or fifties it would be a top grossing musical....with just some small adjustments. and derek hough would be in the company of Astaire and Kelly. but fox, mgm and warners are all gone. oh, well. we still have derek hough.
Report abuse

TangodancerReviewed in the United States on May 8, 2017
5.0 out of 5 stars
Love this movie
Verified purchase
I love this movie... I had no idea tap was a major part of the dancing... it was fantastic!!! I'm a tap dancer & teacher along with ballet, jazz, modern/contemporary, ballroom, latin & swing... whether your a dancer or not you'll love it!
Report abuse

MsSCMomof4Reviewed in the United States on February 16, 2018
4.0 out of 5 stars
Great for Hough-ers
Verified purchase
Any true Derek Hough fan will love this movie, although the other actors and the storyline were sub par. There’s a steamy dance/love scene between Derek and Boa that was totally worth the money. And dang, Derek can TAP! (Of course he can, he can do everything!). But again, if you’re not a die-hard dancing, DWTS, or Derek fan, I would probably skip this one.
Report abuse

Martha N.Reviewed in the United States on September 7, 2014
3.0 out of 5 stars
His acting ability is very good and his dancing
Verified purchase
His acting ability is very good and his dancing, as always, was terrific. But, I was personally, disappointed in the plot of the story. I believe if given a good part and story that he has the making of a very fine actor. Let's give him what he deserves and see where it takes him. Best of luck Dereck. Your book, "Taking the Lead", is absolutly Terrific.
2 people found this helpful
Report abuse
See all reviews
Back to top
Get to Know Us
Make Money with Us
Amazon Payment Products
Let Us Help You
EnglishChoose a language for shopping. United StatesChoose a country/region for shopping.
© 1996-2021, Amazon.com, Inc. or its affiliates