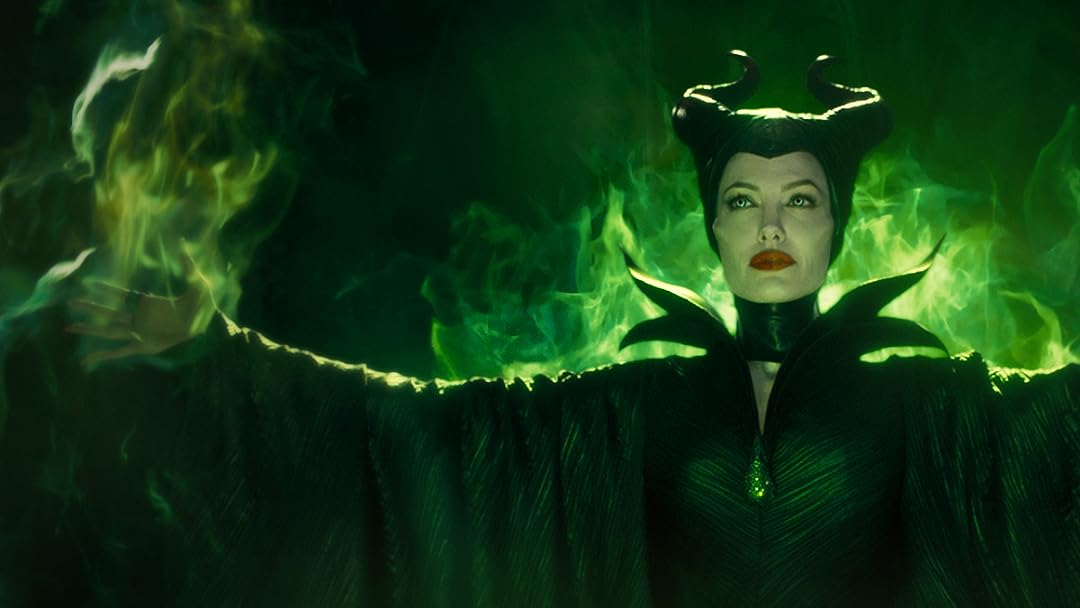 (51,105)
6.91 h 37 min2014X-RayHDRUHDPG
Angelina Jolie stars in the untold story of Disney's most iconic villain from the classic Sleeping Beauty. Driven by revenge, Maleficent places a curse upon the king's newborn infant Aurora, only to discover she may hold the key to peace in the land.

The TrudgerReviewed in the United States on March 25, 2019
5.0 out of 5 stars
I love this movie
Verified purchase
I bought this DVD sight-unseen on the strength of the reviews. I wasn't disappointed.

Angelina Jolie is wonderful as Maleficent. Elle Fanning is absolutely charming as Aurora. Someone may have already mentioned this, but one of the younger versions of Aurora is played by one of Angelina's children.

I've been a fan of Sharlto Copley ever since I saw him in District 9. I must say, however, that I prefer him playing more sympathetic roles.

I'd never even heard of Sam Riley. Nevertheless, I really enjoyed his performance as Diaval. Being turned into other creatures so often can't be easy.

The music, by James Newton Howard, is sublime.

I usually gripe about too much CGI being used, but without it, I don't think Maleficent could have been made. The amount in this movie never bothered me.

Maleficent transports me into its world and enables me to forget about what's happening in the real world for awhile. I love movies that do that. Recommended.

Gina DeFilippoReviewed in the United States on March 28, 2019
5.0 out of 5 stars
surprisingly good movie
Verified purchase
In all honesty, I had avoided watching this movie for years, thinking it was going to be a cheesy storyline. I watched it quite by accident over the Halloween season on tv, and was really surprised by how much I enjoyed it. The effects are beautiful, the story is an interesting twist on a classic without being hokey. And it was unexpectedly touching. I of course had to buy a copy for myself. I would highly recommend this movie, watch it with your daughter.
36 people found this helpful

Zachary T EcksteinReviewed in the United States on July 10, 2019
1.0 out of 5 stars
One of the worst movies I've seen in a long time
Verified purchase
I got about 3/4 of the way through before I couldn't handle the terrible, terrible writing and acting anymore. Jolie is just seriously bad in this and a lot of it has to do with the dialogue and directing which is flat, sparse, and sometimes very oddly written. The "story" (if you can call it that) plods along with almost no stakes and the animated creatures skitter about in the background, completely pointless and badly animated. The re-imagined story could have been a great opportunity to really dig into a villain's character, but this was truly a failure at every turn. I regret the 2.99 I paid. I don't even think a kid would be able to sit through it without getting bored.
23 people found this helpful

Colleen M.Reviewed in the United States on March 31, 2017
5.0 out of 5 stars
Not as you remember, but better
Verified purchase
I have enjoyed the live-action renditions of the Disney classics, and this one takes a twist on the story and puts it in the perspective of the villain herself. Although if it's not the story you recall seeing, it definitely holds its own with storytelling. Maleficent is the "Wicked" of Disney movies, where we see the actions and reasons for why she became evil, and also the redemption arc that is not present in the original film "Sleeping Beauty." I truly enjoy this change, but for fans of the longtime film it may come as a shock to see the changes made to the tale.

Aurora is now in the film for much longer, Stefan is an evil king, and the three good fairies are very different than the previous in terms of their actions. Some of the moments from the original are in there, but rushed and short. The main focus is on Maleficent, and her story arc. However, for fans of the original, this can also open up more to things we didn't know before about Maleficent.

I highly recommend this to any Disney fan, however I also advise that they brace for the changes in the story.
44 people found this helpful

Alex ThompsonReviewed in the United States on January 3, 2015
4.0 out of 5 stars
Very enjoyable, gorgeous film - same version as the Blu-Ray
Verified purchase
Beautiful, well-made retelling of the Sleeping Beauty story. Angelina Jolie has her coolest role in a long time, avoiding the scenery-chewing habit of most fantasy-storybook movies. Elle Fanning doesn't have a whole lot to do except look pretty & happy, but she makes a wonderful princess. Some of the characters aren't very well fleshed-out (e.g. the king), but for the most part everyone plays their parts well. The scenery & environments are top-notch, looking fantastical but not reeking too badly of the overly-CGI syndrome that most movies today have. This film also has one of the better dragons I've seen, as far as having that specific 'dragon' quality from fairy tales that you expect (something I find missing in the dragons on "Game of Thrones", for example).

I bought the Blu-Ray/DVD 2-disc set first, then saw the various complaints about it being an edited version from what was shown in theaters. I bought this "Theatrical" digital copy hoping to get the unedited version, but they are identical. If there is an unedited version for sale, I haven't found it. Most people will never miss what was edited out (I'm just a compulsive completist), so as far as watching the movie is concerned, this version works just as well as the Blu-Ray...which is to say, just great.
49 people found this helpful

Robin Reviewed in the United States on April 21, 2020
5.0 out of 5 stars
Feminist with standout character art - amazing sidekick, score, costumes, and acting.
Verified purchase
The character and scene art is beautiful with refined style, spectacular scenes and archetypal moments. Angelina Jolie is like a silver screen actress. Her portrayal is operatic with so few lines and so much emotion unspoken. Beautiful, dark archetype full of love. The heartwrenching expression of betrayal endured by women is authentic. Jolie's resurrection is beautiful.

I consider this film a great work of art despite a limp ending that doesn't do the rest of the film justice. While I sometimes wish this movie could be a more complete masterpiece, I love and appreciate it for what it is and it has moments of standout excellence. The theme and feminist twist alone make it important. I can watch it again and again and love the empowering resurrection message and women's spirituality encompassed in the story.
4 people found this helpful

Daniel B. LyleReviewed in the United States on July 16, 2020
5.0 out of 5 stars
Excellent 3D enhances a surprisingly fresh fairy tale
Verified purchase
The 3D is excellent, with good protrusion out of the screen when appropriate, long depth into the screen, and fine resolution between the 3D characters and elements. Viewed projected in 3D on a 120" screen with full surround sound, it's an immersive experience that's quite enchanting. For 3D blu ray collectors such as myself, this disc (and its even better creature-animated sequel) is a must. Bravo!
6 people found this helpful

Tanis Coralee LeonhardiReviewed in the United States on December 21, 2019
1.0 out of 5 stars
A dark tale
Verified purchase
The tale must have come from dark times. It is a dark tale. It is all about women controlling other women. Talk about depressing. About a woman (Maleficent) trying to erase the child’s (Aurora’s) mother, cursing the child to make it live in misery forever, then binding the child to herself through manipulation of the curse she made in the first place. Honestly, Maleficent is more evil than dark. Then she kills the child’s dad, probably to then pretend she is the child’s mother and take the throne from its rightful heir. Left out that true ending.
5 people found this helpful
See all reviews
Back to top
Get to Know Us
Make Money with Us
Amazon Payment Products
Let Us Help You
EnglishChoose a language for shopping. United StatesChoose a country/region for shopping.
© 1996-2022, Amazon.com, Inc. or its affiliates