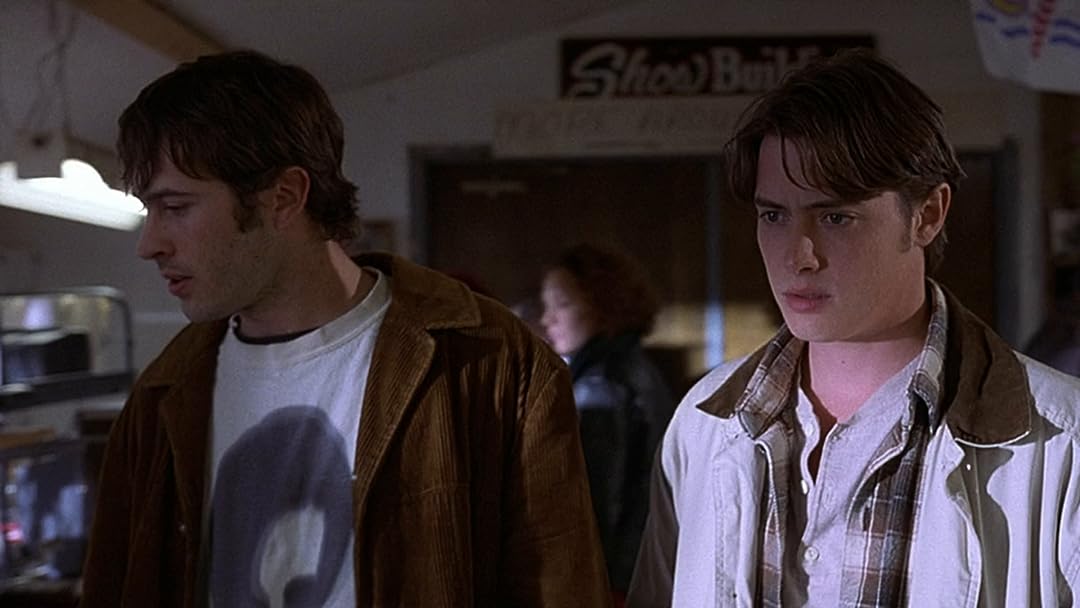 Barrett CroweReviewed in the United States on March 18, 2018
1.0 out of 5 stars
Digital HD is NOT included
Verified purchase
The movie itself is a just as I remembered it; classic Kevin Smith.

The reason I'm giving it one star is because this blu-ray is listed as having Digital HD Ultraviolet and was the main reason I purchased this disc. But once you open it up and try to redeem the code, you'll discover that it is expired. A quick email to Universal reveals that they no longer offer a UV copy of this movie and, instead, I was given the option of receiving Fast Times at Ridgemont High. Big Nope.

This practice of having digital copies expire when the case itself presents Digital HD as an added feature with no obvious warning that you might not get what you thought you were paying for is completely deceptive and unacceptable. It's like advertising the package contains both Blu-ray and DVD and finding they've removed the Blu-ray discs because that deal has expired. That obviously hasn't happened because removing a physical disc from a sealed package would be very difficult but because they can simply make digital HD codes inactive, they can do this very easily with this format. The practice of doing so is no less acceptable, though.

I've experienced this in the past with the old digital downloads format but never with UV. Needless to say, I'll be avoiding Universal movies in the future.

scomigiReviewed in the United States on December 22, 2016
4.0 out of 5 stars
Early 90s Kevin Smith Comedy at it's finest!
Verified purchase
Everything you love about Kevin Smith comedies is on full display in "Mallrats", Smith's second outing as a director.

Although not as well known as some of Smith's other titles, "Mallrats" remains one of my favorites, featuring all the Star Wars and comic book references, the locker room humor, and quick witted writing that were Kevin Smith hallmarks, this movie also features a very young Ben Affleck, as well as Shannen Doherty (fresh off of her 90210 days), Jeremy London, Jason Lee (pre "My Name is Earl"), along with Smith and long time friend Jason Mewes hitting full stride as their signature characters Jay and Silent Bob.

If you like Kevin Smith movies, you'll love "Mallrats!"

Jeffrey P BairdReviewed in the United States on August 21, 2021
1.0 out of 5 stars
What a depressing show.
Verified purchase
I feel this movie has no redeeming qualities. For a teen comedy movie, it is poorly acted by 20+ year old actors who over play their parts. The attempt at humor falls totally flat with very predictable stunts, lame jokes, poorly written lines, sexual comments and innuendoes with a focus on meaningless that seem forced on the audience, some rampant sex encounters, and some bullying type macho behavior that laughable. It is almost like this movie was going for the Mall version of Animal House. I finally turned it off at the 10 to 15 minutes. This movie does nothing but promote promiscuous sex with shallow, meaningless relationships and it lacks the style and techniques of well portrayed comedy. Just making characters stupid does not create humor or comedy. I turned it off because I was getting depressed because it was so lame.
One person found this helpful

Megan CarpenterReviewed in the United States on January 22, 2022
1.0 out of 5 stars
Disc is Unrecognizable. Refund please.
Verified purchase
I have been looking for this disc for just shy of 5 years; was super excited to locate it, and it arrived on Jan 22, 2022. Unfortunately my BRAND NEW DVD player (that also supports 4k) refused to play it, yet it's played other HD dvds as recent as last night. I also tried it on my regular ps4 (the black one) and my Arkham series ps4 which plays both dvds and blurays...and I got the "unrecognized disc" warning on it too.

I tried to get a refund but it says I have to have USPS pick it up and I was told by another seller for a different product to allow that once before...they never came and got the package and it's still in my home to this day unable to be used. I am unable to get to my local usps location as I cannot drive or own a vehicle.

Please refund me or send me a regular DVD that will play. I'm SO ANGRY RIGHT NOW...especially since I'm missing the Jay and Silent Bob reunion this summer im Boston because of a upcoming medical surgery.

GeekStampedeReviewed in the United States on January 26, 2021
5.0 out of 5 stars
Classic & Timeless !!
Verified purchase
Mallrats is a timeless classic comedy! Arrow did this film justice and contains a load of special features. The picture quality is the best it has ever looked and it's like watching it for the first time. So many great characters, and jokes that I forgot about. I highly recommend buying this ASAP, and have a few drinks while you watch it! You won't regret this purchase!!
4 people found this helpful

LiebenReviewed in the United States on September 7, 2019
3.0 out of 5 stars
Stick with the edited version
Verified purchase
In this instance, the regular cut is way better than the extended. I was thinking an extra 35 minutes may have made it even funnier, but it just dragged. Just a bunch of scenes going on way past the punchline which led to a very dull experience. Also, the different versions have different plots which I couldn't get past. It's difficult to rate overall so I give 3.5 stars for the original, and 1 star for the extended. Blu ray looks great, though.
4 people found this helpful

glenn thompsonReviewed in the United States on June 13, 2016
5.0 out of 5 stars
the dialogue plays a decent part on why Smith films are so fantastic and fun
Verified purchase
To this day I cannot see why this film did so badly and how people can sit there and blast it. As most people agree, the dialogue plays a decent part on why Smith films are so fantastic and fun, and this was the first thing that grabbed my attention. As mentioned, when I stumbled across Mallrats on Cable, it was almost the end of the film at the Game Show segment. To have a chick insinuating having sex as a question, and having Brodie (God bless Jason Lee!) scream out "Oh, you mean like...!", I was hooked. Thankfully, as cable is infamous for doing, Mallrats got multiple re-runs and the next day I caught the flick in full. Onto the DVD Itself, any DVD of a great film such as Mallrats deserves purchasing. I mean, there is no other way, bar stealing a film reel yourself, to get the fantastic picture quality and sound, and more importantly, which you can't get too many places, BONUS FEATURES! And for this DVD to be advertised as having "Over 1 hour of Deleted Scenes", it makes any fan salivate from the mouth. Whilst I know many film purists who state "Deleted Scenes are deleted for a reason" (!), any true fan of a film wants to see scenes that the director intended to include but was prevented from doing so due to film politics, irritating production companies or simply time management.
The real gem on this disc however has to be the Audio Commentary. By the way, this was the first Audio Commentary I ever viewed with "Video Hijinks"; IE: when the mallrats logo appears, press the select button on your remote to change the screen to a 'live' shot of the guys in the Audio Commentary booth interacting with each other. It was great to see all the guys together. Smith, Mewes, good ol' Ben Affleck (Who by the time I saw Mallrats had become 'all that and a bag of potato chips' through his post-Mallrats flicks), as well as "Chasing Amy's Jason Lee" (A referral poor old J.L. will probably take to the grave) all work great together, feeding of what each other says to make a very intertaining and worthwhile DVD. In fact, People I know that HATE Mallrats (I can't see how the could) have bought the DVD primarily for the Commentaries and Extra Features. One mate I know only liked Clerks and Chasing Amy, but owns every Kevin Smith DVD on the market! Another Gem has to be the "Easter Egg" on the Mallrats DVD. For those DVD-Illiterate people out there, an Easter Egg is a 'hidden bonus' but in most cases, these aren't hidden very well. To access it, move your cursor onto the Robot's Eyes at the Mallrats Menu and press select (It is either the Main Menu or the Bonus Features Menu). Rather humerous little addition by Kevin Smith.
5 people found this helpful

D. H. SempeckReviewed in the United States on January 23, 2019
5.0 out of 5 stars
Maybe Kevin Smith's best movie...
Verified purchase
This movie should have been big at the box office... Clerks was a critical darling and got lots of press for it's make-it-yourself movie aesthetic. So giving that director enough money to make more great stuff should have been a no-brainer. And the movie he made as good as expected. Just not marketed very well and languished on opening weekend. I saw it twice at the same theater I saw Clerks multiple times (it was packed for Mallrats). Somehow the rest of the world didn't get the message. I'm so glad Kevin didn't give up on it and has supported the home video market version. Buying the Blu-ray completes my purchase of his New Jersey Trilogy (somehow there are 5-6 of them) of movies.
One person found this helpful
See all reviews
Back to top
Get to Know Us
Make Money with Us
Amazon Payment Products
Let Us Help You
EnglishChoose a language for shopping. United StatesChoose a country/region for shopping.
© 1996-2022, Amazon.com, Inc. or its affiliates