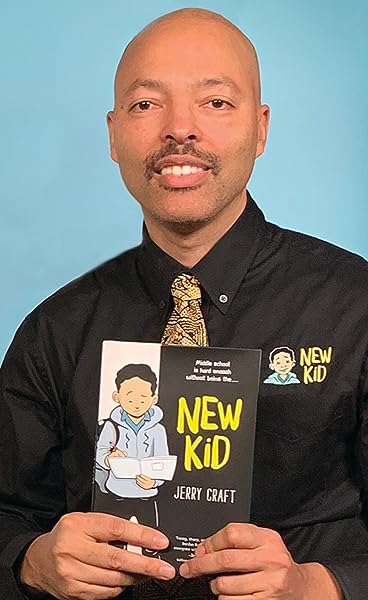 by Jerry Craft (Illustrator)
5.0 out of 5 stars 1 rating
See all formats and editions
Sorry, there was a problem loading this page. Try again.
Mama s Boyz: Home Schoolin is 112-pages of comic strips and stories aimed at getting kids and young adults to focus on the positive sides of African-American life. The book follows a year in the life of the Porter family, which is made up of Pauline (a widow), her two teenaged sons, Tyrell and Yusuf, and Gran pa and Uncle Greg.

In January, Gran'pa takes the boys downtown to eat at a lunch counter in celebration of Dr Martin Luther King s birthday. For the first time, the teens are made to realize what life was like before the Civil Rights Movement as Gran pa makes Yusuf give up his seat to a white passenger. Once at the restaurant, they are told how African Americans used to have to enter through the back door and were not even permitted to sit at the counter. These are crucial parts of our past that many of today's youth know absolutely nothing about!

Other topics include an appreciation of Black History and Women's History Months, back-to-school (Mom's favorite time of the year!) and Kwanzaa to name a few. And when the boys have to take care of their flu-sickened Mom during Mother's Day, they realize just how much she does for them on a day-to-day basis. In addition, October commemorates National Book Month as real-live NY Times best-selling author Eric Jerome Dickey appears in the strip to do a book signing at the family s bookstore!

Mama's Boyz: Home Schoolin' also includes a look at how cartoonist Jerry Craft creates his strips and draws his characters, as well as his commentary on various comics throughout the book. There's even an old-fashioned flipbook with a dancing Yusuf showing his moves at the bottom of the page. The final section includes special Mama's Boyz strips that have been done for organizations such as the American Diabetes Association and Donate Life America.

The book concludes with the most popular Mama's Boyz story in its 15-year run, entitled Dawn of the Dad in which Mom shows Yusuf the tremendous responsibility of raising a child as he s made to care for an infant for an entire weekend. Changing diapers, 2 a.m. feedings, crying, burping... you name it. When this story first appeared in newspapers, Jerry received over 500 emails from parents, teachers and clergy around the country commending the series. One mother wrote me to say that she let her son read the strips, then used it as a way to talk to him for the very first time about the issue of babies having babies. "I was honored to have played a role in that," says Craft. As a result, in June of 2007, he received a Conversation Starter award from the DC Campaign to Prevent Teenage Pregnancy. The award is for advocates who have helped change the conversation about teen pregnancy from one that places blame and shame on teenagers, to conversations about what it takes to motivate teens to want to avoid pregnancy in the first place.

Mama s Boyz: Home Schoolin' is a great read for everyone from eight to 108! And it s something the whole family can and SHOULD enjoy together, which is a rarity in itself.

"Jerry Craft has 'crafted' a book of his comic strips chock full of real people and poignant messages. Accessible to everyone, it provides hours of discussion between those young and older, across ages, races, and other 'borders' both real and imagined. Right there along with an apple a day, try a comic strip a day! --Elise Klein

Mixing down-home wit with traditional values, Jerry Craft presents a colorful reflection of African-American life that the whole family can enjoy. -- Angela Burt-Murray, Editor-In-Chief, Essence Magazine Crafts quick wit, artistic skill and deft use of youthful language to bring out life lessons are sure to capture a young persons interest. -- Pamela Toussaint, Author of Great Books For African American Children Jerry Craft is one of the finest cartoonists and professionals in the business. It is a pleasure to have him as part of the Chicken Soup Series. -- Lisa Nichols, The Secret and Coauthor of Chicken Soup for the African American Soul and Chicken Soup for the African American Womans Soul Mamas Boyz is one of my favorite comic strips. Not only do I love to follow Mom and the Boyz as they work in their family bookstore, but I also appreciate how it supports writers and literacy. I even got to appear in a story. How cool is that?! -- Eric Jerome Dickey, NY Times and Essence Magazine best-selling author Kid reviews The new book is great! It is really funny and I like how you went month-by-month. The dancing Yusuf in the corner was also cool and clever. Nice! -- Peter E., age 12, Westport, CT I really liked this book. You can learn a lot from it and it is easy to relate to the characters, which is good. That means you wrote this very well. Keep writing, you can go far. -- Dani B., age 10, Norwalk, CT I thought this book was extremely funny and enjoyable. The characters were funny and had cool personalities. It was very educational and the drawing part made me feel like drawing is fun and easy. I cant wait to see the book in stores! -- Davie B., age 11, Norwalk, CT

Jerry Craft is the creator of Mama's Boyz, a comic strip that has been syndicated by King Features since 1995. He is also the artist / writer of Mama's Boyz: Home Schoolin' a brand new 112-page collection of his award-winning comic strip. The book features individual comics strips, stories, and even a section on how he draws one of his characters and creates his strip. The book is aimed at getting kids and young adults to focus on the positive aspects of African-American life and has already been endorsed by Teachers Against Prejudice!

His first book, Mama's Boyz: As American as Sweet Potato Pie! was named in <>Great Books For African-American Children. In addition, the Mama's Boyz characters have acted as national spokes characters for the American Diabetes Association's African-American Program (which earned Craft two Outstanding Supporter Awards for his work during National Diabetes month). In June of 2007, he received a Conversation Starter award from the DC Campaign to Prevent Teenage Pregnancy. The award is for advocates who have helped change the conversation about teen pregnancy from one that places blame and shame on teenagers, to conversations about what it takes to motivate teens to want to avoid pregnancy in the first place.

The Mama s Boyz characters have also been used to spread the word for several other organizations such as The Coalition on Donation's Donate Life program and are now being worked into a campaign for the American Council for Fitness and Nutrition as a way to help prevent childhood obesity.

Jerry Craft is a graduate of the School of Visual Arts where he received his BFA degree in advertising. After working in the ad world for a dozen years as a copywriter, he got his first job as a cartoonist working with Barbara Slate on a variety of comic books for Marvel and Harvey Comics. Next, he worked at King Features Syndicate where he wrote sales brochures for some of the world s most popular comic strips.

He followed that with eight years at Sports Illustrated For Kids where he started as a web producer and ended as its Editorial Director. While there he created and executed the popular SI KIDS TV segment which consisted of several Flash animated TV commercial spoofs such as the Randy Moss Driving School (still available on YouTube).

In the spring of 2001, he was nominated by the National Cartoonists Society for an award in their New Media Division. He also hosted a daily online sports radio show for kids (interviewing athletes such as Derek Jeter and Dontrelle Willis) and did a weekly guest spot on Radio KOL.

In October of 2006, Craft left his job as Editorial Director for in order to pursue his passion for drawing full time under his own company, Mama s Boyz, Inc.

Jerry has been nominated for a Glyph Award for Outstanding Achievement in Black Comics and is the recipient of an African American Literary Awards Open Book Award for best comic strip.

He has drawn greeting cards, board games, book covers and illustrations for publications such as Essence Magazine to name a few, and is currently working on his first children s book for a publisher on the East coast.

Jerry has appeared on WCBS Sunday Morning show with Mario Bosquez as well as cable news shows such as Cablevision News 12 s Our Lives with Janus Adams, and in publications like the Stamford Advocate, Cartoonists Profiles magazine, and the Onion to name a few. Radio interviews include stations like WNYC, WBAI and WLIB radio in New York. And last, but definitely not least the Wendy Williams Experience!

For more info, check out his website at mamasboyz.com

JERRY CRAFT is an author and illustrator. New Kid is his middle grade graphic novel that has earned five starred reviews, including one from Booklist magazine, which called it “possibly one of the most important graphic novels of the year.” Kirkus Reviews called it “an engrossing, humorous, and vitally important graphic novel that should be required reading in every middle school in America.”He is the creator of Mama’s Boyz, a comic strip that was distributed by King Features Syndicate from 1995-2013, and won five African American Literary Awards. Jerry is a co-founder of the Schomburg’s Annual Black Comic Book Festival. He was born in Harlem and grew up in nearby Washington Heights. He is a graduate of The Fieldston School and received his B.F.A. from the School of Visual Arts.

Get more info at www.jerrycraft.com