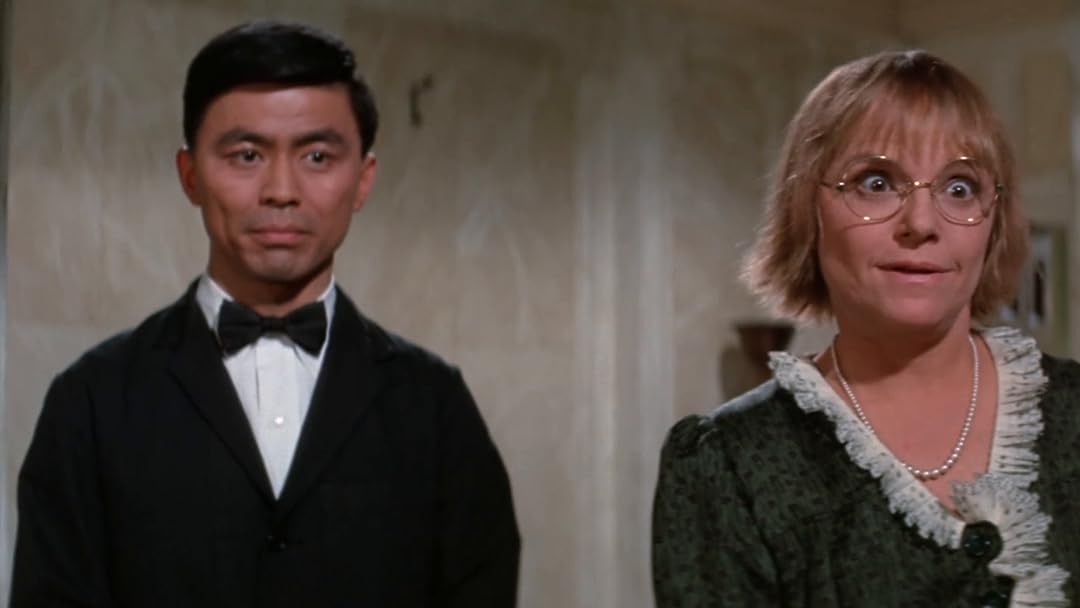 (2,187)
5.92 h 11 min1974PG
Lucille Ball stars in this film of the blockbuster Broadway musical thattells the story of the flamboyant, unconventional and, above all ,glamorous Mame.

HumbiReviewed in the United States on November 28, 2018
5.0 out of 5 stars
The Best MAME !
Verified purchase
There is no need to review the film version of the musical MAME. Suffice it to say, the show has been imortalized for the cinema by the great Lucille Ball and Robert Preston. I have watched it on film and DVD, but this Blu-ray release by the Warner's Archive is the best this movie has ever looked. Remember, those soft lenses used to shoot Lucy's close-ups, are not going to go away, but the rest of the shots are nice and sharp, and the color saturation is just beautiful. It boasts a crystal clear soundtrack. The high definition and 2.40:1 aspect ratio trailer is a great bonus feature. If you want the best source available of this film for your collection, this is it!.
25 people found this helpful

StandardReviewed in the United States on July 23, 2018
5.0 out of 5 stars
If you love Lucy, you'll love her as Mame
Verified purchase
I have often heard that Rosalind Russell's version of Mame was the standard and classic. I've seen it and it was very good for its day, but I'm probably one of the minority that think Lucille Ball's Mame was great. Okay, admittedly, I'm a big Lucy fan and she may well have been a little long in the tooth for the role, and her singing voice does leave something to be desired, but makeup and the camera were kind (perhaps too much so), and I do think, ALL things considered, she did a hell of job with this. I loved the musical numbers, the glamorous fashions and the salty language, and the supporting cast were all terrific: Bea Arthur as Vera, Robert Preston as Beau, and Jane Connell as Agnes Gooch. There may be a lot of things about this film that could have been done much better, but as good as Russell was, Ball brings something to her Mame that Russell didn't. It may not be her best movie, but I for one came away from it still loving Lucy.
19 people found this helpful

Eve the MuseReviewed in the United States on October 30, 2016
5.0 out of 5 stars
I Truly Do Love Lucy
Verified purchase
I love Lucy. I always have. She was special and one of a kind. I don't care that this musical didn't do well with critics. I love it because it has Lucille Ball, a legendary performer, in it. She makes MAME worth watching with her wit and beauty and comedic timing and charm. She wears the most beautiful costumes in this movie and the scenery is breathtaking. It's a touching, fun story, too. It's a comedy musical and I watch it all the time because it makes me smile and feel warm and happy inside, which not too many movies make me feel these days. I miss the days when you could see a movie without cursing in it and a movie with heart and warmth and lots of laughs. This is a very special movie and watching Bea Arthur and Lucille Ball together is a real hoot. They make a great pair in this movie. Robert Preston is such a sexy, handsome man whom I love watching in Victor/Victoria. He adds a special something to the film as do the other actors/actresses. It's just a fun, enjoyable film to watch.
25 people found this helpful

Carol of SJReviewed in the United States on December 18, 2021
1.0 out of 5 stars
Bad acting, bad singing, weird soft focus filming
Verified purchase
I watched this because I knew that "We Need a Little Christmas" came from this musical. I've seen "Auntie Mame" both live and on film, and enjoyed it. This was pretty bad. Lucille Ball's singing voice is terrible, and her acting is stilted and self-conscious. The terrible portrayal of Miss Gooch is cringe-worthy, and her voice is painful to listen to. Apparently Lucille Ball insisted on the soft-focus filming of her shots, but it is just distracting.
3 people found this helpful

Marilyn C. BrahenReviewed in the United States on August 30, 2020
4.0 out of 5 stars
Lucy was fine in this version.
Verified purchase
Lucille Ball is excellent acting in this version of MAME, which I'd never actually seen any version before, and I liked Robert Preston as her husband and the child who plays her nephew. The first half of the film had me smiling but the second half of the show dragged as the plot of this Broadway "hit" gets bogged down with the older version of the nephew and his self-centered girlfriend and her snotty prejudiced family. Mame puts them in their place and gets her nephew to break his engagement and marry another but the script becomes boring and overly predictable. Lucy isn't a singer and only a few of the songs were memorable (others bogged down with an excess of lyrics) but Bea Arthur has a great voice and she and the rest of the cast improved the vocals. Now that I've seen it, it's not one of my favorite musicals, but I must say that Lucy looked beautiful, the costumes were entrancing, and the movie had some great laughs and some memorable acting.
3 people found this helpful

LJDaleyReviewed in the United States on September 15, 2022
5.0 out of 5 stars
Wonderful movie
Verified purchase
Enjoyable movie all the way around - Lucille Ball was great: acting, singing, dancing. Bea Arthur and Preston Foster casted beautifully. Complaints about the "soft focus" on Lucille Ball's face is of no concern. Surprised that her dancing went so well considering her serious accident the year before, breaking one leg in four places. Also, yes her voice is more like talking - but who cares - did not distract from the story. Also, I was concerned about seeing this because it was considered a flop when it came out, criticisms about soft lens focus and singing voice . I saw Auntie Mame years before with Rosalind Russell and loved it (non musical); but have to say I enjoyed this rendition even more.

tamsherownbossReviewed in the United States on December 15, 2021
5.0 out of 5 stars
I love Lucy
Verified purchase
This review is for the DVD version on the movie. As far as play and options, it worked fine and was easy to navigate.

The movie itself is, like the play, a musical. I had only ever seen the movie version with Rosalind Russell before, which was not. The only downside of this movie is that Lucy's voice was very gravely by the time she did this movie, but every musical number is just as much fun. I would love to have seen Angela Lansbury in the role but c'est la vie. I have heard that Bea Arthur was not proud of having been in the movie, but I think she was fabulous and her character was flamboyant and interesting, a perfect match with Lucille Ball. If you're looking for a fun musical to add to your Christmas viewing list, I would definitely bring this one home. It will be part of our annual tradition.

Rick BarszczReviewed in the United States on February 15, 2019
1.0 out of 5 stars
Another lie from Amazon!
Verified purchase
I called Amazon before I bought this blu ray of “Mame” and asked if it was restored to the original 70mm 6 channel stereo that it was filmed in. Amazon told me it was in 5.1 Dolby Digital. In fact you have no sound playback option. All sound comes only from the Center Channel. It’s getting harder and harder for people to tell you the truth about anything.
10 people found this helpful
See all reviews
Back to top
Get to Know Us
Make Money with Us
Amazon Payment Products
Let Us Help You
EnglishChoose a language for shopping. United StatesChoose a country/region for shopping.
© 1996-2022, Amazon.com, Inc. or its affiliates