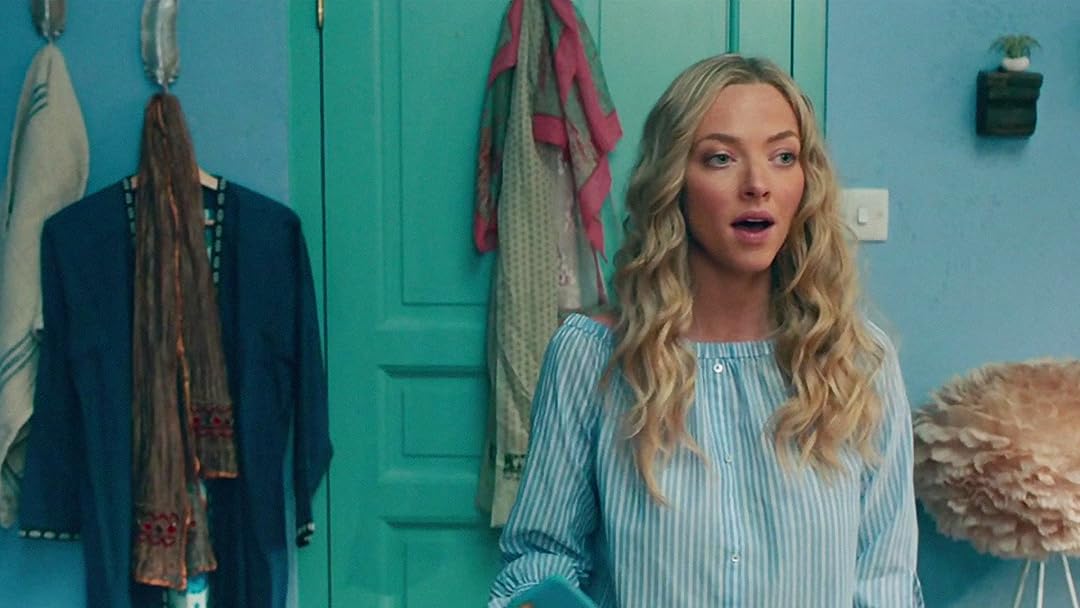 (21,467)
6.62018X-RayPG-13
Join the celebration, sing and dance, and discover how it all began! Ten years after Mamma Mia! The Movie, the film’s original cast returns in this musical sequel.

Flossie CoxReviewed in the United States on October 27, 2018
1.0 out of 5 stars
Pure Disappointment
Verified purchase
So deeply disappointed with this movie. Spoiler alert. The first movie was about Donna and Meryl Streep carried it wonderfully. This number 2 was a shadow of the first. The story had already been told and much better in number 1. Did they forget Donna's mother in number 1 was very religious then they introduce Cher, in the worst outfits I've ever seen, as her touring singer mother. WRONG. Poor acting, no script and no singing. The daughters voice is not strong enough to carry a movie. This movie had no spark no omp and no toe tapping memorable singing. I wished I had rented it instead of purchasing it. Wasted money.
80 people found this helpful

Carla C.Reviewed in the United States on July 25, 2018
5.0 out of 5 stars
Amazing performance, Highly recommended!
I have been patiently waiting for this release ever since I found out they were making it. I have since seen it TWICE. I love the music. Before the viewing I tried to listen to the sound track a few times and the music originally seems weird. Since the second showing, I have been able to fall in love with the B level songs of ABBA. I highly recommend seeing it. The story line is wonderful, Lily James does a spectacular job playing young Donna. This movie was everything and more. The humorous one liners are great.

P.S STAY FOR THE END OF THE CREDITS!! There is a bonus blooper that everyone else missed when I saw it.

TLSReviewed in the United States on October 29, 2018
1.0 out of 5 stars
WHAT A DISAPPOINTMENT
Verified purchase
The storyline was so depressing, most of the songs were so mellow and downbeat compared to the fabulous first Mamma Mia and where was Meryl Streep? Her essence made the first movie and should have been in the sequel as well. Her part was so minor, it was almost non-existent. I was expecting fun and laughter and great music. What were they thinking? Totally ruined the great fun and music that is Mamma Mia!!! What a DISAPPOINTMENT!
52 people found this helpful

Amazon CustomerReviewed in the United States on October 25, 2018
1.0 out of 5 stars
Don't waste your money on purchase.
Verified purchase
I waited in excitement for this movie like everyone else. What a Dissapointment it is. Bad acting, bad singing. I made myself watch the whole movie thinking it would get better. When it was over I threw it away so sorry to have wasted my money. Even my husband said it was terrible. If you really have to see it, Rent it first.
51 people found this helpful

MimzyReviewed in the United States on March 5, 2019
5.0 out of 5 stars
Ignore the negative reviews and try it for yourself
Verified purchase
This sequel, in my opinion, was better than the first movie. While I enjoyed the first movie from the perspective of the cast and the music, there were moments I was uncomfortable due to some of the very well-intentioned, but not excellent singing. In the sequel, they removed that problem by making many of the songs involve an ensemble sort of performance, so the less than perfect voices were able to blend easily, and we had so much fun...Dancing Queen was AMAZING. I am only commenting on this part first because so many of the hater comments talked about awful acting and singing. Honestly, I was cracking up the entire movie. My teen was cracking up. We were both singing along (we had subtitles on, so she could follow all of the lyrics) and dancing the night away. It was a blast! What others might call questionable acting, I saw as intentional humor, and I thought the voices did a fine job this time. Some, of course, were exceptional (I had to explain to my daughter who Cher was, though...lol).

Some have said the movie is a "sad" shadow of the first. Yes, the first movie was based on a celebration. This one (mild spoiler) is focused on the bittersweet opening of the hotel that was Sophie's mother's dream which is happening after she sadly passed away a year prior. This revelation is made early on in the movie, so the viewer is aware they are not likely to see much of Meryl Streep during the movie. However, we see the backstory of her character, played by a delightful actress with a lovely voice, and all of the questions we may have had during the first movie are answered. Her cameo at the end is not meant to be an actual presence, but a fond and slightly wistful memory/wish, for those who didn't understand that.

What I found most amazing about the movie is how the writer(s) managed to make every song that was used work perfectly within the context of the scenes. Also, the humor was consistently on point, the younger versions of the older characters were well cast, and the story was charming (as opposed to cheap, as it could have been) and fun.

In the end, the best part of it to me was how the underlying message of Donna's love for her daughter caused her to make incredibly brave and while perhaps not feminist forward choices once she found out she was pregnant, the BEST choice for her. As Valedictorian, everyone expected "great things" from her...in my opinion, she wound up proving that the greatest thing a parent can do for their child is be there for them, which we know from the first movie, she was for Sophie. And in spite of her passing, she managed to leave a legacy of a family and friends (the family you get to choose) to support Sophie in her own new adventure. Donna's choices gave Sophie the confidence to take a chance when others might have taken an easier route. What a lovely message to leave us with...though I must admit there were some tears on my cheeks there at the end with the next to last song...it couldn't have been more beautiful or perfect. The final song wrapped up the package perfectly with a glittery bow and had the beat rocking to put the happy rhythm back in my step (and hilarious attempts to sing along). Kudos to everyone in the cast and crew. Great job.

Make sure to stick it out to the absolute end to see a short blip at the end that will leave you with a smile on your face. I recommend this movie. It has references to what you'd expect based on Donna's history of not knowing which of three men is Sophie's real dad (see the first movie to understand what I mean), but it is handled in a mostly tasteful way. Safe for most teens, moms, and grandmothers to view together for a fun evening together, but if you are a stickler, watch it first to be sure and send someone out for snacks when needed. ;-)

Texas88FanReviewed in the United States on October 24, 2018
1.0 out of 5 stars
What a waste
Verified purchase
Making it was a waste of talent. Buying it was a waste of money. The original "Mamma Mia" was great; but, the "Here we go again" is horrible.
44 people found this helpful

paulReviewed in the United States on October 24, 2018
1.0 out of 5 stars
Don't buy this dvd
Verified purchase
God why did I buy this dvd. Worst movie I have ever purchased believe me doesn't come close to the first
33 people found this helpful

new mom in KSReviewed in the United States on October 29, 2018
1.0 out of 5 stars
Totally disappointing, don't waste your money.
Verified purchase
The first Mamma Mia, was so light hearted and fun. Here We Go Again was horrible, recycled music (that wasn't as enjoyable as the first version) and an out of sync story line. I'm glad that I didn't see this at the theater, but I wish I had only rented it instead of buying it.
28 people found this helpful
See all reviews
Back to top
Get to Know Us
Make Money with Us
Amazon Payment Products
Let Us Help You
EnglishChoose a language for shopping. United StatesChoose a country/region for shopping.
© 1996-2021, Amazon.com, Inc. or its affiliates