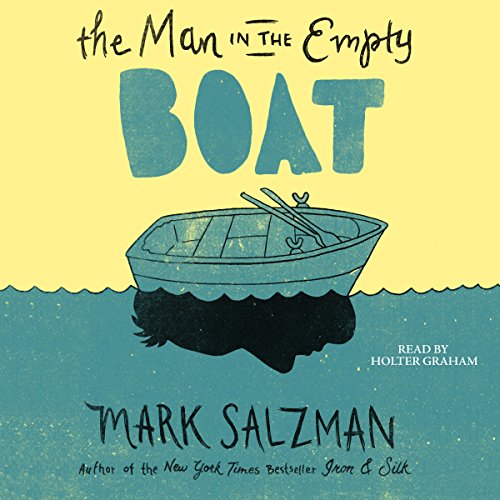 The Man in the Empty Boat

Anxiety has always been part of Mark Salzman’s life: He was born into a family as nervous as rabbits, people with extra angst coded into their genes. As a young man he found solace through martial arts, meditation, tai chi, and rigorous writing schedules, but as he approaches midlife, he confronts a year of catastrophe. First, Salzman suffers a crippling case of writer’s block; then a sudden family tragedy throws his life into chaos. Overwhelmed by terrifying panic attacks, the author begins a search for equanimity that ultimately leads to an epiphany from a most unexpected source.

The Man in the Empty Boat is a witty and touching account of a skeptic’s spiritual quest, a story of one man’s journey to find peace as a father, a writer, and an individual.

Your audiobook is waiting!
Learn more about membership
List Price: $18.85
You Save: $0.90 (5%)
By completing your purchase, you agree to Audible’s Conditions Of Use
Sold and delivered by Audible, an Amazon company
Share

Chris Wozniak
4.0 out of 5 stars Long-awaited, wonderful read
Reviewed in the United States 🇺🇸 on January 15, 2013
Verified Purchase
Firstly - I was very much caught off-guard when I stumbled across a new Mark Salzman book on Amazon (which I immediately purchased for my Kindle - absolutely couldn't wait to read it) and was amazed, annoyed, and pleased, all at once. Amazed, because it had obviously been so long since a new book had been published; annoyed because I hadn't known it was out, AND because it was so short; and pleased, because he has been one of my favorite authors since reading Iron and Silk, when I was a wee sprat (a library book, which I dropped in the bath tub, much to my mother's chagrin... I insisted that my mom take me to see the movie, because the book was no longer in legible condition!). I have been able to relate to every single one of Salzman's novels (and memoirs), and while they haven't all been an enjoyable experience for me (Lying Awake was... disappointing - though it was a well-written work, the spiritual aspect is alien and unwelcome to me, and the book as a whole mostly just made me irritable), I anxiously await every new book that he releases.

The Man in the Empty Book took some work for me, initially, as I've just come off a bout of Murakami, and then several of Lois Lowry's young adult novels (The Giver series, which enjoyable as a whole). There's also the fact that I haven't read any memoirs, let alone any Salzman, for some time now. I believe the last novel of his that I'd read was The Soloist (for a second time), after lending it to a friend (I'd really wanted to discuss it with him - it's a fantastic novel, particularly for a fellow musician and cellist).

What took some adjustment for me was the self-flagellation, humor, and tangential nature of Salzman's writing - this in and of itself is amusing to me, because it's both very similar and familiar to my own writing style and internal monologue. Though I think Salzman definitely has more of a light-hearted spin to his writing... I get the impression that it is not quite so with his own thought process, and that he wants to be funny and likeable in his writing. I'm not criticizing. I really do think he IS, in fact, quite funny and likeable. But the effort involved takes a bit of getting used to, and I had to relax in to it. Thereafter, like all of Salzman's writing, the prose is very comfortable and enjoyable to read.

One of the things that I find most entertaining about Man in the Empty Boat is how difficult it was for me to relate to Salzman's dislike of dogs; I am, and always have been, a dog person - they're my favorite companions (yes, moreso than humans), and I've never really taken issue with the small annoyances that come with having a dog. Except for those irritating little issues that come with small dogs - they always need warmth and they're so bleeding anxious, it's far more like tending to a very young child than having an affectionate and adventurous companion. All the same, I was very easily able to fall in to Salzman's mindset - he makes his feelings very relatable, thus it wasn't difficult to understand. It certainly helped me understand cat people a bit (as much as there is to understand about them!).

I hadn't come in to reading this memoir with a sense for the complete character, and I was blindsided a bit by the more emotionally stunning moments. They sneak up on you, and they don't pass without making a significant impression. It's not a book that you finish and put down and walk away. I'll be thinking about it for some time, I think... I'm still processing now. Again, I did have a difficult time relaxing in to the read itself... but I think, in the end, that it will be one of my favorites of Salzman's work, and likely the most enduring in my memory (perhaps not so much so as the Soloist... remains to be seen).

Jill C.
1.0 out of 5 stars This is not a book, it's a blog.
Reviewed in the United States 🇺🇸 on April 28, 2012
Verified Purchase
This "book" contains stories of his life after his brief flush of success as an author and why he hasn't written a book in 10 years or so. It's angsty and depressing, and not nearly as enjoyable as Iron and Silk, or his autobiography "Lost in Suburbia" (basically a prequel to Iron and Silk, on how he became so engrossed with Chinese culture and eventually ended up teaching there as an English professor), nor as entertaining as the Laughing Sutra. Even the melancholy "Lying Awake" has more appeal than this so far.

I hold to the premise that this particular book is a blog, and I'm not finding myself very sympathetic towards the author's difficulties and life. He's been complaining, whining, and having panic attacks every chapter, and I'm not sure there will be a revelation at the end of the book either: it's mid-life crisis for an author with writer's block who is currently directionless and the content of the book reflects this: none of the stories are connected that well, and it's just short essays about himself and his feelings towards his family and some background as to how he got to this state.

So far it feels like the grand total of the book will be that he learns he doesn't HAVE to write for anyone but himself ("you are who you chose to be" is a key point in the book, but he's waffling about what he wants to be), and that's what will cure him of his writer's block in the end-- but it's been agonizing to get there more often than not. Also, that does not seem like a satisfying ending to me, as it is so self-centered, rather drivel, and so empty. No wonder he is so depressed as he is no longer in China and interested in something other than himself, which distracted him from his unsatisfying life.

If it's unsatisfying to HIM to recount (no wonder there's writer's block), it's doubly so for a reader. He hasn't done anything interesting TO write about in the past 10 years. I could google millions of people at random and find blogs or tweets like this this book all over the internet.

I'm hoping the ending is not "Believe in yourself" like so many children's movies out in the world today . . . .

* I skipped ahead to the end of the book, and I never do this. Depressing doesn't cover it. The moral of this book is so wrong-headed. Gah, it's not comforting to tell yourself that we can only try our best and believe in ourselves because no one else is going to do it.

This is a worthless, waffly message to take away from a midlife crisis, it's laughable how Scalzman views it like it is a god-sent revelation. If one has nothing to believe in other than himself, morals are useless. It only takes looking at countless people in history to realize this; human beings and societies can justify anything. It is impossible to determine "right" or "wrong" from such a world-view and there can't be consequences even for deeds that harm others or society as a whole. Whose ideals are we representing here, anyway? What if a person who believed this was born in a cannibalistic society, or if that person was a murderer? How hard does one have to work in order to feel he has done enough to be a "good person" anyway? This is what is called moral relativity, and if there is nothing to measure up against, it is easy to fall into the trap of either measuring too hard and becoming a legalist or setting the bar really low: "Look, honey, I'm home and I didn't kill anyone today! Yay me!"
Read more
18 people found this helpful
Helpful
Report abuse
See all reviews

J. Macnamara
5.0 out of 5 stars He's a very good writer.
Reviewed in Canada 🇨🇦 on March 9, 2016
Verified Purchase
Mark Salzman did it again. When I got to the end, it was an "what? no more?" moment. His writing is so real, authentic. The reader feels that she knows him, his friends and family, everyone, and likes them, to boot. He's a very good writer.
Read more
Report abuse
See all reviews