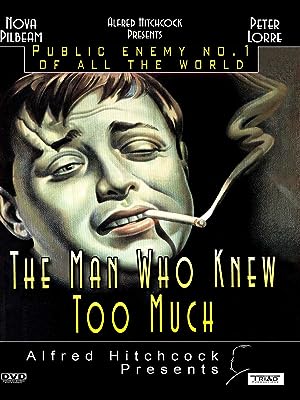 The Man Who Knew Too Much (Enhanced Edition) 1934

(216)
6.71 h 15 min193513+
The Man Who Knew Too Much is a 1934 suspense film directed by Alfred Hitchcock and released by Gaumont British. It was one of the most successful and critically acclaimed films of Hitchcock's British period.

Amazon CustomerReviewed in the United States on May 16, 2019
1.0 out of 5 stars
A terrible print of this great movie.
Verified purchase
This version is labeled "Enhanced Edition", which is very misleading. There is a much better print of this same 1934 movie -- also available on Amazon under the same name, but without "Enhanced Edition" in the title. (And, no, I'm not talking about the 1956 version with Doris Day and James Stewart.)

The original 1934 British movie is a classic early Hitchcock, and highly recommended for any Hitchcock fan. I loved it! And it's fun to compare with Hitch's 1956 Hollywood remake.

The 1934 movie fell out of copyright for some time, and so there are many bad prints available. This offering, labeled "Enhanced Edition", is a very bad print, with terrible image quality, terrible sound, bad edits and unnecessary cuts. DO NOT GET THIS VERSION! The better copy, distributed by Janus Films and part of the Criterion Collection (thanks, TMC!) is available also from Amazon (search Amazon for "B00CJZC020"). It is So Much Better. You can actually hear the dialog and sound effects and see the details of the images.

I'm actually surprised Amazon has both prints of the 1934 movie available. This "Enhanced Edition" is unworthy of the movie, and of Amazon, and should be removed from their catalog. I would have asked for a refund, but there's no way to get a refund on a digital rental. One star only because zero stars is not an option. (FYI, I rate the other print of the 1934 movie as 4-out-of-5 stars.)

johnfReviewed in the United States on August 4, 2019
4.0 out of 5 stars
Hitchcock begins his career as the master of suspense.
Verified purchase
Hitchcock is not the only director who remade his own film even though it’s a rare thing. His is the most famous example though both Frank Capra and Howard Hawks did so with “Lady for a Day” (1933) and “Ball of Fire” (1941) respectively. Though they were given new titles Hitchcock retained his original title, perhaps to point out that he remade it. The original version of“The Man Who Knew Too Much” was an important film in Hitchcock’s career. Up to this point he had made the usual mixed bag that any director of the period would have, both silent and with sound. Both “The Lodger” and “Blackmail” were set in the world of suspense thrillers that became his specialty, but they were two among many. His immediately previous film, “Waltzes From Vienna” had been such a bomb that his future as a director was in doubt.

Fortunately Gaumont Films stuck with him. With “The Man Who Knew Too Much” he found his calling and began his singularly illustrious career. In the famous series of interviews with Francois Truffaut he described it as “The work of a talented amateur” with both directors agreeing that the second film was superior. Overall I have to agree with Hitchcock’s own assessment, though the 1934 film remains a must for any Hitchcock fan. Besides, it’s not a bad film by any standard and has fans who prefer it to the glossy 1956 remake.

Each film is a product of its era. In the 1930s films were generally short (and this is only 78 minutes), black and white, and of course, reflected the mores and assumptions of their times. In the early thirties they were also limited by tinny sound, high contrast black and white and the usual lack of a background score, all of which affect “The Man Who Knew Too Much”. The length, big American stars, sometimes slow plot development and sumptuousness of the remake were all hallmarks of mid to late 1950s films, a time when movies had to present something bigger than television in order to sell tickets.

The problems of “The Man Who Knew Too Much” go beyond its time period, however, and are simply the results of a less-experienced director, something obvious to Hitchcock at a later date. The opening, while clever, is really too short for a first time viewer to know just who these people are and what their relationship is to one another. There are problems with tone as well. The director loved to mix humor and suspense but here it frequently lurches back and forth between the two awkwardly. At times the hero seems to be in risk of his life with the villains but at other times they are having drinks together as if they are at some club. Some sections, including two major confrontations go on far too long. Other areas full of potential horror, such as a scene in a dentist’s office are not exploited but instead are played for laughs. The editing is rough in places.

It does still have much to recommend it, of course. The economy of the film’s length keeps it fast paced and moving forward. The period allows the man and wife to be sophisticated and indulge in witty repartee that is totally absent in the remake. The presence of Peter Lorre as the villain, especially this early when not everyone was familiar with him, is a real plus. He’s mesmerizing in every scene he’s in. This was so early, in fact, that he learned his lines phonetically as he didn’t yet speak English. His co-conspirator, Nurse Agnes, is as chilling as Lorre and played by Cicely Oates, whom I have never seen in another film. (She reminds me of Nancy Kulp, who played Miss Hathaway in “The Beverly Hillbillies”, but sinister rather than comic).

In both films the mother plays a direct part in bringing about the conclusion. Also in both films the climax takes place in a major hall in London featuring the same piece, a cantata for soprano, orchestra and chorus by classical composer Arthur Benjamin. Here we get but a snatch of it and in the remake nearly all of it. Still, the sequences are nearly identical in many ways. Hitchcock also knew when he was really good.

This film shows Hitchcock still learning his craft. He was a fast-learner. His next film was “The 39 Steps”, a true masterpiece. Nevertheless, don’t miss this one. In fact both films together make an excellent double feature. As an added recommendation, look at the beginning after watching the film. The conversation between Jill and Ramon foreshadows much of what will occur.

EXTRA NOTE: This film was allowed to fall into public domain and so there do not seem to be any good copies around. It is in dire need of restoration and doesn’t look nearly as good as “The 39 Steps” which stayed under copyright.
2 people found this helpful

joel wingReviewed in the United States on January 14, 2022
3.0 out of 5 stars
Murder and intrigue in this Alfred Hitchcock thriller
Verified purchase
Murder and intrigue. That’s the topic of The Man Who Knew Too Much where Edna Best and Leslie Banks find that their friend is assassinated and their child is kidnapped by hidden and dark forces. It’s up to Best to figure out what’s happening and get their kid back.

The movie begins with some comedic scenes about the jet set who vacation in Switzerland which is where the story starts. Then it quickly gets to the espionage which is quite well done. Peter Lorre is one of the bad guys and adds the perfect creepy yet sinister feel to the plot.

Alfred Hitchcock directed this film and would do a second version in 1954 with Jimmy Stewart. I prefer this one.

Avid readerReviewed in the United States on April 17, 2018
4.0 out of 5 stars
A good early Hitchcock film!
Verified purchase
Hitchcock filmed this story twice. This is the first version. The second version was made in the 1950's with James Stewart and Doris Day. The second version is better known and more polished, with big name stars. But this earlier version has a charm of its own. It begins in the Swiss Alps at a ski resort (rather than in Marakesh). The family in the story is very appealing. There is dry English humor and stiff-upper-lip attitude. The whole cast is excellent, including Peter Lorre. I spent an enjoyable evening watching it. I'm glad to add it to my Hitchcock collection.
2 people found this helpful

BequetteReviewed in the United States on January 31, 2021
4.0 out of 5 stars
Hitchcock's first draft!
Verified purchase
How unusual it is for a director to do a first draft of a film. In 1934 Alfred Hitchcock made the Man Who Knew Too Much, only to do an entirely new version in 1956 with Jimmy Stewart and Doris Day. This original black and white version is just as engaging as the remake in large part because of the always interesting performance by Peter Lorre. At only 75 minutes this short film is worth your time.

SparksReviewed in the United States on September 28, 2019
1.0 out of 5 stars
terrible copy
Verified purchase
I recently purchased an on-line video of this film, not a dvd. The quality is horrible, essentially non viewable without triggering a migraine. I know there are better copies out there as I have seen them. No excuse for marketing this fine Hitchcock movie in such a poor state. Do not by the on-line version. Added insult cost 15 bucks. OK Amazon, upload me an improved copy.
One person found this helpful

lordbyron59Reviewed in the United States on January 13, 2022
1.0 out of 5 stars
Its a terrible copy with poor visual and sound quality
Verified purchase
I bought the disk to complete my Hitchcock collection, but the visual quality was very poor, with those annoying horizontal pixilated lines, and the audio quality was so poor it was difficult to understand what they were saying. There are no subtitles, so you are on your own guessing what the dialogue might be. After 10 minutes of stuggle, I gave up, and rented the movie on Amazon Prime, the enhanced version, which had better visual and audio quality, and subtitles to boot. This disk is a bad copy many generations removed from the original. Don't waste your money.

D. SteigmanReviewed in the United States on March 17, 2009
3.0 out of 5 stars
A very good early Hitchcock movie with Peter Lorre
Verified purchase
I liked this better the 2nd time I viewed the movie. This is the original Man Who Knew Too Much - which Alfred Hitchcock remade with James Stewart, which was the only movie he remade. It isn't as good as The 39 Steps. the acting by Peter Lorre stands out. Basically it is an assassination plot. The other actors in this are sort of 'there' whereas Lorre's role stood out. It was a little hard to follow for some reason, maybe it was the British acting style but it makes sense at the end. It is a crime espionage film. Any fan of the great Alfred Hitchcock should see this. DVD wise the print purchased was from Westlake and from what I read there print is better then Laserlight and Madacy but not as good as the Region 2 UK releases. I am happy with the transfer overall. It is not Alpha quality thank God ! :)
3 people found this helpful
See all reviews
Back to top
Get to Know Us
Make Money with Us
Amazon Payment Products
Let Us Help You
EnglishChoose a language for shopping. United StatesChoose a country/region for shopping.
© 1996-2022, Amazon.com, Inc. or its affiliates