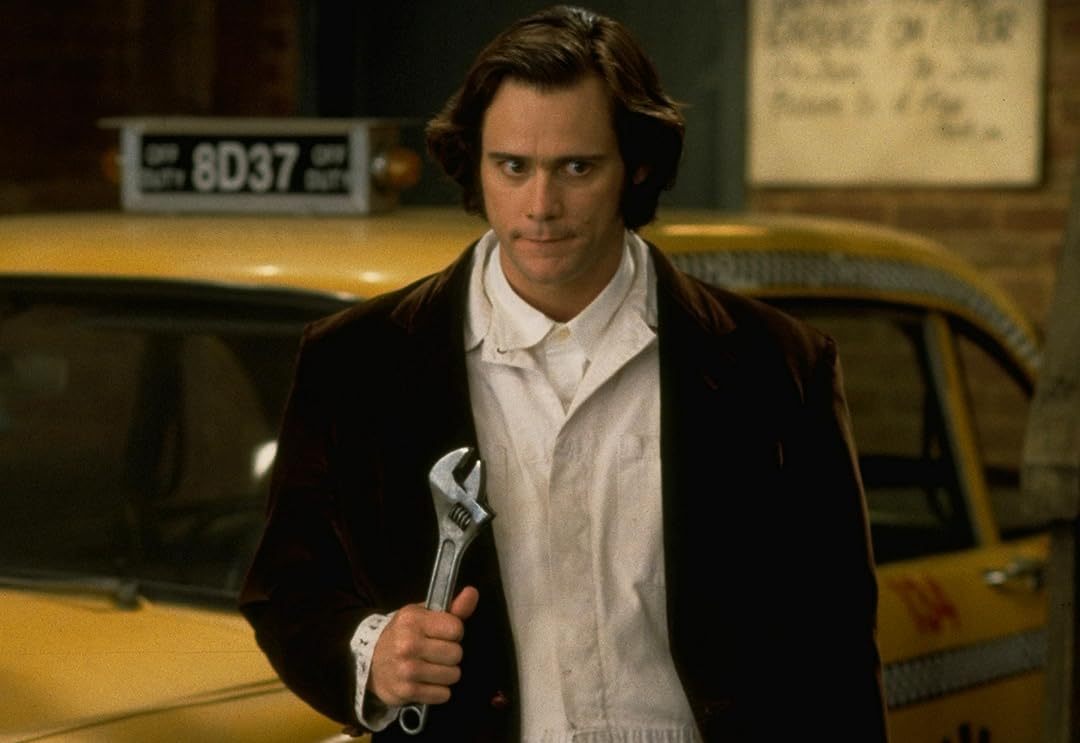 Man on the Moon

(1,377)7.41 h 58 min1999X-RayR
Man on the Moon is a biographical movie on the late comedian Andy Kaufman. Kaufman, along with his role on "Taxi," was famous for being the self-declared Intergender Wrestling Champion of the world. After beating women time and time again, Jerry Lawler (who plays himself in the movie), a professional wrestler, got tired of seeing all of this and decided to challenge Kaufman to a match. In most of the matches the two had, Lawler prevailed with the piledriver, which is a move by spiking a guy head-first into the mat. In one of the most famous moments in this feud was in the early 80s when Kaufman threw coffee on Lawler on "The Late Show with David Letterman," got into fisticuffs with Lawler, and proceeded to sue NBC.

The Tally HoReviewed in the United States on August 13, 2018
5.0 out of 5 starsReview without Spoilers - Pros & Cons
Verified purchase
This 1999 biographical comedy-drama film is about the late entertainer Andy Kaufman, starring Jim Carrey as Kaufman.
Pros:
1. The film is interesting and well done.
2. Surprising to me, Jim Carrey in my opinion actually does a good job with the part as Kaufman.
3. REM's song "Man on the Moon" is great as is the rest of the soundtrack.
4. Danny DeVito does a good job acting as George Shapiro.
5. You do not need to be a Kaufman fan to still enjoy this film.
Cons:
1. I actually don't have any, although some may not like that the film is not completely historically accurate.

Crackles McFarlyReviewed in the United States on December 17, 2018
1.0 out of 5 starsEating crushed glass in hydrochloric acid would be BETTER than watching this movie!
Verified purchase
Hardly any details of Kaufman's working behind the scenes and his well known ways of doing very detailed pranks on his own family and friends to the point they would get into fist fights and be angry for YEARS over it just so he could be funny.
You'd be better spending your time learning how to grow a rose on your lawn or adopt a child from Africa than watch this Movie because it sucks so very very much. This movie is worse than dying followed by being resuscitated then dying again only to learn it was really an Acid trip prank that WILL be played on you again without your permission many more times but you won't know when and cannot predict nor prevent it. DO NOT WATCH THIS MOVIE!
10 people found this helpful
Report abuse

Mike GishReviewed in the United States on January 10, 2019
5.0 out of 5 starsThe True Genius of Andy Kaufman
Verified purchase
Andy Kaufman's true genius was that he could make people feel the way they deserved to feel. He, with one audience, would have people laughing and scowling at the same time, depending on whether they were positive, honest and "in the know", or negative, dishonest and egocentric.

This movie is a look behind (and in front of) the scenes of a genius' life and that in and of itself is such a rare phenomenon as to be worth watching. In this case, however, Andy Kaufman is a rarity even among geniuses. If you "get" him he's hilarious if you don't (which means that you really don't "get" life), he's extremely offensive (which is his intention).

For those who get him, this movie is a must-see because it shows details that you've never seen before that can help you appreciate him all the more. Enjoy!
2 people found this helpful
Report abuse

R. WardrepReviewed in the United States on June 25, 2020
5.0 out of 5 starsTOUCHING
Verified purchase
Andy was a beautiful soul & Jim Carrey's portrayal was spot on. Even on his death bed, Andy still exhibited his sense of humor. It's hard to believe that Lorne Michaels of Saturday Night Live decided Andy wasn't good enough for further appearances on the show. Elvis once said that Andy's impersonation of him was his favorite! Now THAT is something to brag about! Andy had a dream and followed it - that's what life is all about. May he RIP. This is a must watch movie!
2 people found this helpful
Report abuse

Aldous H.Reviewed in the United States on June 3, 2017
5.0 out of 5 starsGreat performances, script and aesthetics.
Verified purchase
One of my favorite movies ever. The movie is funny and uplifting.

Jim Carrey is convincing and hilarious. He should do more biopics. The performances, music, sets, costumes, overall aesthetics and even the bit players and extras are all pitch perfect. Patton Oswalt has a hilarious throwaway scene in the middle. REM wrote an original for this, which is every bit as good as the song for which this song was named.

Most of the characters reprise their roles. The two (three?) exceptions are Michael Richards (who is played by Norm McDonald) and George Shapiro, who is played by Danny DeVito. DeVito is great in this role, but a directorial decision was made to elide over his role on taxi.

David BeckhamReviewed in the United States on February 4, 2017
3.0 out of 5 starsReally well-written with some good performances (Courtney Love in particular) but Carrey's performance and ...
Verified purchase
Really well-written with some good performances (Courtney Love in particular) but Carrey's performance and Forman's direction seem really uncertain and unfocused. There's not a lot of consistency, tonally speaking, and Carrey's performance is all over the place though is mostly a hard imitation that, I think, he tries to make seem lived-in while trying to remain honest to the spirit Kaufman himself, which is to say unpredictable. Carrey has a tough situation here, as does any actor playing a famous comedian (let a lone a famous comedian himself) in that he's trying to play a human being and still copy that human being's performance style exactly. As a performer it must be very confusing (as I imagine it was for Dustin Hoffman when he went though Lenny Bruce's famous routines onstage as the comedian in "Lenny") to take a comic act and structure it within a dramatic performance and especially so when it isn't coming "organically" from the character, it isn't coming from the performer's own imagination, it's a rigid, structured work of its' own. It's not so much like when actors play musicians because you can throw yourself into the performance, physically, and make that your own statement,
Report abuse

Nancy Price (flags@pld.com)Reviewed in the United States on June 25, 2018
4.0 out of 5 starsStandup Comedian
Verified purchase
Jim Carrey is the Man on the Moon. Carrey is a stand up comedian who is offered a situation comedy for television position at Loka in the show Taxi. Carrey hates this position and wants to be a "real" comedian. He starts wrestling matches with woman for laughter. He does other practical jokes which are funny only to him. His style of comic is much different than others. His practical jokes finally backfire and he finds himself in a joke himself. The movie is based on true events.
2 people found this helpful
Report abuse

Peter Smith a.k.a I Love the Butler BulldogsReviewed in the United States on July 16, 2018
5.0 out of 5 starsA Real Winner
Verified purchase
Jim Carrey has never been this TERRIFIC before. I LOVED this movie right away that I have decided that I am going to buy the DVD real soon as a tribute to Andy Kaufman. Be sure to have your box of tissues handy because the ending is a real tear jerker. R.I.P. Mr. Kaufman. You Were The Best.

Update for 11/21/2018 I just bought the DVD and gave it to myself for my 29th birthday back in July of this year, and I just bought a second copy to give as a Birthday / Christmas gift for my sister, and I know that she will enjoy it a lot!!!!!!!!!!!!!
One person found this helpful
Report abuse
See all reviews
Back to top
Get to Know Us
Make Money with Us
Amazon Payment Products
Let Us Help You
EnglishChoose a language for shopping. United StatesChoose a country/region for shopping.
© 1996-2021, Amazon.com, Inc. or its affiliates