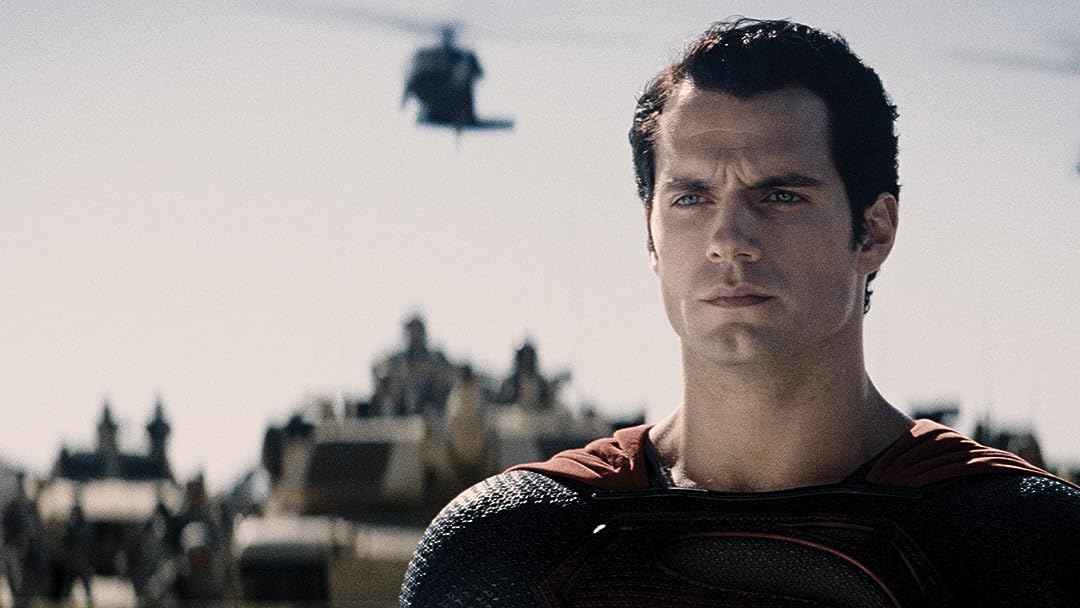 Daniel BarhamReviewed in the United States on May 23, 2016
4.0 out of 5 stars
Multiple viewings and an open mind
Verified purchase
There are a lot of reviews for this movie, but having listened to this debate for 3 years I want to put my thoughts down. My first viewing in the theatre I came away going "wow that was intense and a new take on Superman". Then I started reading the criticism and that started changing my mind about what I saw and even debated one of my friends who loved the movie about its faults. Then I watched it again and realized the reviews and myself were wrong. This movie receives a lot hypocritical flack for no reason. I also read a bunch of Superman comics to see where they were coming from in the criticism . Let me say this, there is no definitive Superman only your definitive Superman. If you prefer Reeve that's fine, but there is room for multiple interpretations. People saying Snyder doesn't know the character are wrong as well. Lines and shots are taking from Birthright and John Byrnes Man of Steel. This is a very post 1987 Superman and really resembles more of the stories from the new 52 and early 2000s such as War of the Supermen, For Tomorrow, and Earth One.
This film is a roller-coaster. From the intense opening to the calmer coming of age then the 2 big battles. Once we get the invasion from Zod the movie doesn't slow down. On first viewing that can be alot to take, but again repeat viewings make me enjoy it more. There are shots in this movie that are absolutely gorgeous and breathtaking. The score compliments the movie greatly and even though there is no charging theme Zimmer's more subtle work feels right. There is joy in the film as well, but it's not spoon fed to you. It is subtle like many of the themes in the film. Another aspect of the movie i love is a great villain who believes he is right and will not stop to achieve his goal. Snyder puts Superman in extremely difficult situations and he has to make hard choices. If any other character did what he did at the end of the film no one would blink an eye, but because it's Superman everyone freaks out. However, as I said this villain would not stop and there was no prison to hold him so Supes made the tough choice. You can clearly see the pain it caused him. If you have issues with this movie please see man of steel answers on youtube. I think as more time goes by this movie will get the respect it deserves.
306 people found this helpful

Dig Dug KittyReviewed in the United States on September 3, 2017
5.0 out of 5 stars
Great Superhero Movie...
Verified purchase
Too many fans nowadays just can't be pleased, no matter what you do with a film. Man of Steel is a wonderful new take on Superman, placing him square in our contemporary world without the campy, ridiculous antics of the previous iterations. I thought this was a Superman that I could believe and get behind. To the 'my way or the highway' movie goers who can never be pleased, I say, lighten up and just allow yourselves to be entertained. This is a great movie...
80 people found this helpful

C. G. KingReviewed in the United States on September 25, 2018
5.0 out of 5 stars
Best Superman
Verified purchase
Henry Cavill brings real depth to the character and I love the story presented here, but wish WB didn't feel they need all the violence and destruction. That is a thrill for a minute and then forgotten, where the story lingers and explains things well. Amy Adams is great and Russell Crowe adds a lot to the story.

I hoped this would be in full screen format, but it's letter box. Although there are two disks (which I hoped would offer both options, or a director's cut or something special) the second disk is just extras. Still I'm glad to have the film on hand to re-watch and I can skip all the building crashing when I want to. Also love the sound track. I wish there was more Henry on display. He's a treat to behold and has a natural likeability that makes you care for Clark Kent. I never was a fan of how Chris Reeve showed Clark to be a bumbling fool, or even his put on super-cool when in the suit. Henry just IS and the whole Superman thing seems to emanate from him so it comes across as more natural. I look forward to a Man of Steel 2.

Tod S.Reviewed in the United States on March 30, 2019
5.0 out of 5 stars
Excellent movie (slight spoilers)
Verified purchase
The more times I watch this, the more it grows on me. Cavill is fantastic as Superman, and his chemistry with Amy Adams is perfect for this film. At first I was put off by the level of destruction at the end of the film, but it was important for the next movie, and I don't think there was much that Superman could have done to prevent the destruction that occurred. He was very new to the cape, and I think that Zod would have turned to destruction had Superman attempted to lure him away from Metropolis.

Superman did what he had to in the end, and while the comics might have come up with a different solution, I think that this depiction is in line with not overdoing the fantastic- a "deus ex machina" kind of comic book solution would have resulted in a worse film, and would have interrupted any suspension of disbelief.

They need to make another one of these. The right ingredients are all there.

Karen Beth GlunzReviewed in the United States on May 16, 2018
5.0 out of 5 stars
A Superb Plot different from Superman!
Verified purchase
Henry Cavill as Clark Kent/Kal-El was magnificent. The plot was different than the Superman movies with Christopher Reeves who will always remain "Superman" in movies, life, and in his death. I enjoyed the plot particularly with a strong cast including Russell Crowe, Diana Lane, Kevin Costner, and Amy Adams who played a strong, warrior Lois Lane rather than a simpering weakling character as in Superman. It was an exciting movie with phenomenal special effects.
31 people found this helpful

ChrisReviewed in the United States on October 19, 2017
5.0 out of 5 stars
Amazing movie !! An all time Classic
Verified purchase
Man of Steel is an Exhilarating ride from beginning to end. The Action scenes are mind blowing and of course the film keeps a serious and emotional component throughout. The director Zack Snyder will always have haters to his movies , not EVERYONE will be able to connect to the emotional tone he sets for his movies. But the ones that appreciate his work understand the level of brilliance he has. He casts superman in a very unique light and in my opinion a much needed and interesting light never really seen before. The visuals are outstanding and with Zacks unique film style he's able to create such atmosphere and depth strictly due to how he shoots the visuals. I know of a few friends personally who didn't like the movie when they first saw it and had many complaints, but now LOVE the movie and realize how terrific it really is. I love this movie and it will always be in my collection forever.
31 people found this helpful

DAReviewed in the United States on February 21, 2020
5.0 out of 5 stars
Review of Man of Steel 4K UHD/BluRay edition
Verified purchase
If you're a die-hard CD comics, or a fan of all of the various versions of Superman since his inception, this is a must have if you own a UHD-4K BluRay player (we bought the Sony player from Amazon since sadly, Samsung has ceased making theirs.

Cavill ain't Christopher Reeve but he surely does his version of Superman credit; the FX and acting is worth the price of this version. Watch it in all it's glory on at least a 55-65 inch 4K-UHD/HDR Samsung curved screen (also bought at Amazon) and you'l probably agree. We bought this and another HD/4K Bluray on an Amazon special sale, which always makes it easier, since these disks are still a bit pricier than ordinary Blurays. We still buy Blurays but these are really great if you have the gear to appreciate the format!
9 people found this helpful

Phillip AllenReviewed in the United States on August 18, 2019
4.0 out of 5 stars
VERY DARK BUT REWARDING VERSION OF THE ORIGIN STORY
Verified purchase
I know that these Snyder films have received quite harsh reviews, claiming that the tone of these films is far too dark for the context of the material. However, I do not feel this is at all the case. I do enjoy Marvel's more light-hearted take on superheros, of course. But their tone is sometimes a bit too light and fluffy for me. These Snyder versions of the superhero film are indeed much darker, and somehow, he makes this fit nicely in this particular paradigm. Snyder shows us a world that is not all fluff and bunnies. He paints a sometimes quite grim picture of our world and the logical consequences of introducing meta-humans into this world. It all makes perfect sense.

The one aspect of these films which Marvel does not examine too deeply is the collateral damage resulting from these super battles. Snyder shows us, often with gut-wrenching realism, how average people are affected. And the images cannot but stay with you for a long time. But, again, it all makes sense. And it makes me curious why Marvel has not had the guts to go as far as does Snyder. Probably because they do not wish to risk offending their public.

Which brings me to an interesting idea: how if these Snyder films were R rated? Would this not provide an even broader palate for his vision? I would think so. Perhaps he should consider this, if he has not already. But regardless, he has pushed these films as close to an R rating as possible, with some truly memorable results. And I applaud his efforts. Because in the end, you come away from these films feeling you have actually experienced living, breathing characters within a realistic world, in spite of all the other-worldly effects. And that is truly a major accomplishment, ultimately rewarding in every sense of the word.
6 people found this helpful
See all reviews
Back to top
Get to Know Us
Make Money with Us
Amazon Payment Products
Let Us Help You
EnglishChoose a language for shopping. United StatesChoose a country/region for shopping.
© 1996-2021, Amazon.com, Inc. or its affiliates