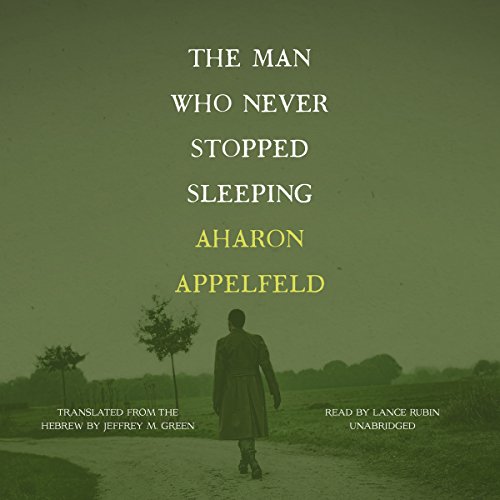 The Man Who Never Stopped Sleeping

From the award-winning, internationally acclaimed author called "one of the greatest writers of the age" (Guardian) comes this story of a Holocaust survivor, wounded in body and spirit, who takes his first steps toward creating a life for himself in the newly established state of Israel.

Erwin doesn't remember much about his journey across Europe after the war ended - with good reason. He spent most of it asleep, carried by other survivors as they emerged from their hiding places or were liberated from the camps and traveled by train, by truck, by wagon, or on foot to Naples, where they filled the refugee camps and wondered what was to become of them.

As he struggles to stay awake, Erwin becomes part of a group of young boys being trained in both body and mind for their new lives in Palestine. The fog of sleep gradually lifts, and when he and his comrades arrive in Israel, they are assigned to a kibbutz, where they learn how to tend to land and how to speak their new language. But a part of Erwin desperately clings to the past - to memories of his parents and other relatives, to his mother tongue, to the Ukrainian city where he was born - and he knows that who he was is just as important as who he is now becoming.

When wounded while on night patrol, Erwin must spend months recovering from multiple surgeries and trying to regain use of his legs. As he exercises his body, he exercises his mind as well, copying passages from the Bible in his newly acquired Hebrew and working up the courage to create his own texts in this language both old and new, hoping to succeed as a writer where his beloved father had failed. With the support of friends and of other survivors, and with the ever-present memory of his mother to spur him on, Erwin takes his first tentative steps with his crutches - and with his pen.

Special invitation from Audible!
Learn more about Membership
List Price: $20.97
You Save: $2.62 (12%)
By completing your purchase, you agree to Audible’s Conditions Of Use
Sold and delivered by Audible, an Amazon company
Share

4.0 out of 5 stars
4 out of 5
21 global ratings
How are ratings calculated?
To calculate the overall star rating and percentage breakdown by star, we don’t use a simple average. Instead, our system considers things like how recent a review is and if the reviewer bought the item on Amazon. It also analyzes reviews to verify trustworthiness.
Top reviews

SR
5.0 out of 5 stars Beautiful and Profound
Reviewed in the United States on February 21, 2017
Verified Purchase
Erwin, the main character, spends a lot of time dreaming, but his dreams do not seem divorced from reality in the way that dreams so often do. Instead, one gets the impression that Erwin touches a deeper, truer, more meaningful reality in his dreaming hours than in his waking hours.

There is great beauty in the simple, and sometimes awkward, ways that Erwin and the people in his life show their love for one another. For Erwin, love is stronger than death, and he loses no one, finding them again and again in the people around him and in his dreams.

Profound, courageous, and life-affirming, this is a dazzlingly beautiful story that I will not forget.
Read more
10 people found this helpful
Helpful
Report abuse

iPhone
4.0 out of 5 stars I'm a great fan of Aharon Appelfeld
Reviewed in the United States on March 16, 2017
Verified Purchase
I'm a great fan of Aharon Appelfeld. He really presents a sense of the lost world of the Carpathian Mountains where he grew up. This book is particularly about language, lost language and its connection to ones mother tongue. Elegiac and melancholic but also hopeful.
Read more
6 people found this helpful
Helpful
Report abuse

NYCLouise
3.0 out of 5 stars confounding and compelling
Reviewed in the United States on July 10, 2017
Verified Purchase
The existential journey of the narrator is distressing. One hopes for a resolution, but when it appears it is quite modest. It seems like the dilemmas of those who lived through the holocaust and went to "Palestine" are clearly described, but there is nothing that results in a commitment to a new life by any of the protagonists. I was uncertain. Of the value of the physical problems of the narrator to his mental struggles . His learning to write in Hebrew by copying bible chapters seemed not to capture his struggle.
Read more
Helpful
Report abuse

Kindle Customer
2.0 out of 5 stars Don't Bother
Reviewed in the United States on February 21, 2017
Verified Purchase
I thought it would put me to sleep.
Read more
Helpful
Report abuse

BlueFarmDogPow!
5.0 out of 5 stars Wonderful book through and through, a classic.
Reviewed in the United States on March 12, 2017
One of Applefeld's best, an extraordinary novel, boy becomes artist through suffering, through the Holocaust, through words, and generosity. A classic. Applefeld should be far better known, more widely read, he is an exquisite writer.
Read more
7 people found this helpful
Helpful
Report abuse

Kindle Customer
5.0 out of 5 stars magnificent autobiographical fiction. new understanding of author's writing mind.
Reviewed in the United States on February 13, 2018
Almost biblical distillation of the holocaust's enduring grip on a boy who is just learning to know himself and if and how he fits into the world.
Read more
4 people found this helpful
Helpful
Report abuse

Amazon Customer
5.0 out of 5 stars Poetic and thoughtful
Reviewed in the United States on January 17, 2018
The story of a young Jewish survivor after world war II is poignant. An unusual perspective of a new settler in Israel is told with beauty and imagination.
Read more
2 people found this helpful
Helpful
Report abuse
See all reviews

Pekka Koskio
5.0 out of 5 stars Superb, sensitive story by Appelfeld
Reviewed in the United Kingdom on October 8, 2021
Verified Purchase
Those who are familiar with Appelfeld's works will not be disappointed. Those who are not familiar will find this novel an eye-opener and a rewarding experience. Appelfeld's language is deceivingly simple: in few words a whole wealth of meanings find their expression.
Read more
Report abuse