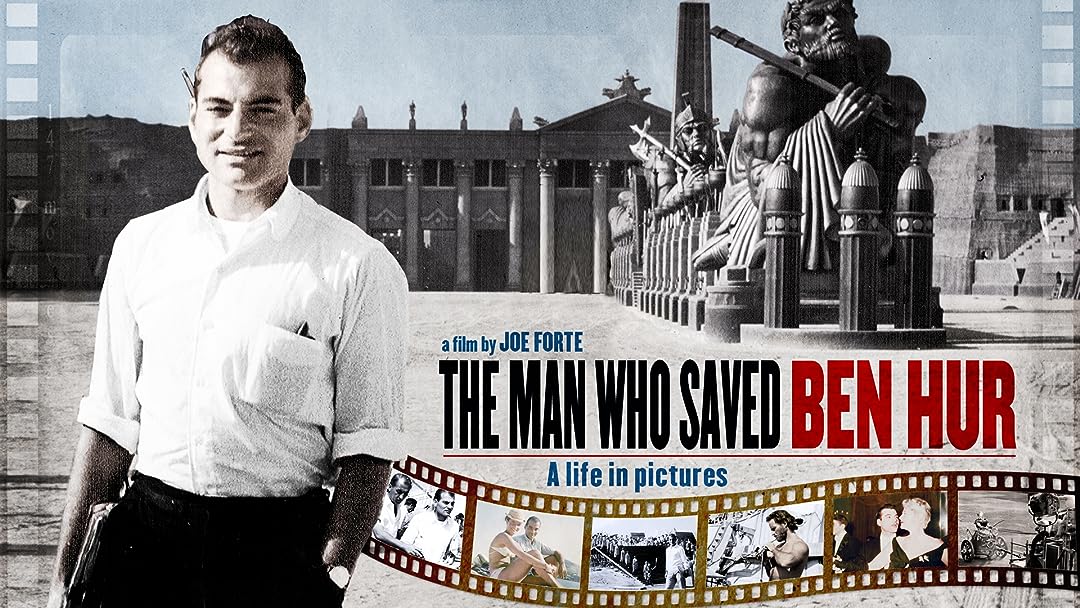 The Man Who Saved Ben Hur

djeremyboltonReviewed in the United States on January 26, 2017
5.0 out of 5 stars
The Timeless Kindness of Johnny Alarimo
Verified purchase
For me this is the best kind of personal documentary; one in which the subject tells his/her story honestly, naturally, without any sense of pretense or grandiosity, while the filmmaker quietly observes, though with gentle nudges here and there to focus the conversation, acting as our curious proxy as we momentarily become friends with a stranger.

In this film's case our subject is John Alarimo, a WW2 veteran who subsequently spent his life in Hollywood, though he's not someone even the biggest cinephile would know of -- but that's what makes this so fascinating. Johnny was the guy on set, at the parties, working and socializing with the major players during the great years of Hollywood: Heston, Burton, Taylor, et al. Now, though, as an elderly man living alone, not wealthy and with no immediate family of his own, the filmmaker (a second cousin from a different generation) takes his camera and shows us what is a most intimate of portraits: of a man reflecting on his life's journey.

Johnny's someone who wants to remember because he kept every memento and carefully organized them, and yet, at the same time, we feel in watching him he wants to keep certain memories to himself. Johnny's story will appeal to movie buffs but more widely to people, like me, who also walk along the street and see someone and wonder who they are, where they're from and what they did to get to this place and point in time. This is an emotional film, to be sure, in the nakedness of Johnny reminiscing about friends long since deceased, but it's also a highly entertaining and technically well made film as all the photos, books, posters, notes and things from Johnny's extensive library are so expertly presented to us making this a wonderfully visual experience, too.

There are documentaries that are made about historical, well-known events, documentaries pieced together by existing footage, essentially journalistic in nature, and then there are documentaries like this one that could only have been made by one person at one time. This is why I find this so special. It manages to straddle both the big and the small in life because Johnny lived in a glamorous world we're all fascinated by and yet we find ourselves more interested in him, of this "forgotten" man who lived behind the scenes. It isn't meant to tell every single detail of Johnny's life, to explore those dark corners and tell the gossip we tend to crave. This is just a study of a gentle, kind man who is happy to share the good (and a few bad) times. He "saved" Ben Hur and a lot more. We should all be grateful this documentary was made in time for us to give credit where it's due. The next time I watch that chariot race I'll be thinking of him. Thanks, Johnny.

MarionReviewed in the United States on March 2, 2021
2.0 out of 5 stars
Glad He Was Memorialed, But Missed the Point
Verified purchase
Instead of letting the stories this man had in his head about the things which were interesting to him, the filmmaker wants to know if he's gay. He gets him to admit he's sorry he didn't have kids, but people who enjoy their work often don't want to stop doing it because it fulfills them.
He did not grow up with connection and intimacy, so, he gets connection and meaning out of being part of a project and team, like the military, like a film crew. It's easier, because you know it's short term. It seems so clear and easy to understand. But Johnny seems misunderstood to me.

He could have had more if he had reconnected with some of those teams he had been a part of. But his mind didn't work that way. He just didn't know how to form these relationships. That's it. He was used to working. He got his life fulfillment out of being a valuable part of a project and he wanted to be seen as an agent of change in the film industry. So, he archives his level of importance. But I feel like his cousin missed the whole point and didn't connect the dots of what he actually did in the pictures. What a disappointment!
One person found this helpful

Pranab MajumderReviewed in the United States on October 10, 2019
1.0 out of 5 stars
Almost click-bait-y title, mediocre home-made movie
Verified purchase
This is a homemade movie about the man who saved Ben Hur, but not about saving Ben Hur at all, in case that is what attracts you. I may be able to save you a few minutes of your life by saying that the way he "saved" Ben Hur was by being the only man in the Italian location of the shooting who could speak both English and Italian.

A bulk of the movie is made up of photos, reminiscences, objects etc. in an old man's cluttered apartment, shot by his younger cousin. It is a mix of personal reflections on part of the film maker, along with rather ham-handed interviewing (I paraphrase, "I asked him about his love life, but he demurred.").

The man who saved Ben Hur was a WWII veteran, and helped in a number of films from that era, spent time with a lot of big-name stars, and had a lot of young "friends" (or at least that is what is implied by the numerous photos with very attractive young women). He never married, did not have long-term friends, and the movie footage covers the last bit of his life, with all the small and large insults of old age. The contrast between a youth spent in tinsel glamor, and the old age spent in obscurity is interesting, but not new.

The man who is the subject of the movie was a man who lived his life in a certain way, not all of his choice, I suppose. He probably did not ask to have the end of his life exhibited for public consumption.
One person found this helpful

David M. WatkinsReviewed in the United States on April 24, 2021
5.0 out of 5 stars
The man behind
Verified purchase
I can't tell you how much I enjoyed this documentary. It really was done well and quite tasteful. For people of my generation, it brings us back when we were young since Johnny was the same age as my father. More importantly, he was part of the great generation that saved the world and lived a life of dignity till the end. I really fell this is an important piece of work that brings to life the story of a man forgotten by the people he helped the most and disappointing that he didn’t get recognized for the contributions he made to the movie industry.
Watch it and you won’t be disappointed since in my eyes this man really was a legend that made something of himself but alas like all of us he got old and Hollywood like they do with everyone, discards them and replaces them with someone less qualified buy younger. I can’t imagine the life this man lived. The people he met, the things he did a accomplished. My hat is off to the maker of this film and my hat if off to the man himself who saved Ben Hur!

DirectedByReviewed in the United States on February 23, 2020
5.0 out of 5 stars
A TOUCHING -- WONDROUS PORTRAIT OF AN ASSISTANT DIRECTOR
Verified purchase
Having worked on many commercials, television & films, I can most certainly relate to the life and journey of your cousin, Johnny Alarimo. Good Joe Forte, (the director) ... keeping these memories alive for posterity matters likely more than you'll ever realize. You've put water back into the well, so others may drink ... BRAVO-!

SIDE NOTE: It appears you wrote a film that co-starred a dear friend & mentor of mine in your 'FIREWALL.' I speak of the recently late Robert Forster. He starred in a minor cult picture I wrote called 'THE BANKER.' Small world.

Jeffrey Lee HollisReviewed in the United States on July 27, 2016
4.0 out of 5 stars
A Touching and Gentle Portrait
Verified purchase
This is a touching and gentle portrait of a man of great dignity who rubbed elbows with some of the great legends of Hollywood. It will fascinate you and break your heart. It's a bit short, but I didn't mind.
15 people found this helpful

ScottReviewed in the United States on July 3, 2017
5.0 out of 5 stars
Compelling Documentary Will Also Pull Your Heartstrings - Watch This!
Verified purchase
I feel so fortunate to have found this amazingly heartfelt, moving tribute to a man who deserves to be remembered. Johnny Alarimo's Hollywood experiences, stellar as they may have been, are eclipsed by the bond that was forged between subject and filmmaker on camera. Joe Forte has not only crafted a compelling documentary about a true denizen of Old Hollywood. He has honored his cousin, a gorgeous man of talent, wit, intelligence and tragically broken heart, with the gift of immortality. Honestly, I was crying at the end. I could not recommend this more highly.
5 people found this helpful
See all reviews
Back to top
Get to Know Us
Make Money with Us
Amazon Payment Products
Let Us Help You
EnglishChoose a language for shopping. United StatesChoose a country/region for shopping.
© 1996-2021, Amazon.com, Inc. or its affiliates