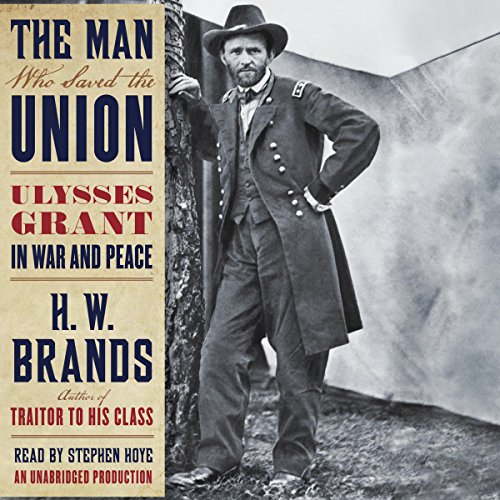 The Man Who Saved the Union: Ulysses Grant in War and Peace

List Price: $39.95
You Save: $4.99 (12%)
By completing your purchase, you agree to Audible’s Conditions Of Use
Sold and delivered by Audible, an Amazon company
Share

4.7 out of 5 stars
4.7 out of 5
421 global ratings
How are ratings calculated?
To calculate the overall star rating and percentage breakdown by star, we don’t use a simple average. Instead, our system considers things like how recent a review is and if the reviewer bought the item on Amazon. It also analyzes reviews to verify trustworthiness.
Top reviews

Ray
VINE VOICE
5.0 out of 5 stars A review of Grant's life
Reviewed in the United States on June 1, 2015
Verified Purchase
This book is a well written historical narrative the covers the life of U.S. Grant from childhood until his death of cancer in 1885. Unlike so many other biographies of Grant, which focus almost exclusively on his war years, H. W. Brands looks at the totality of the former general and president’s life.

Naturally, any biography on Grant has to devote a significant portion of the book to his Civil War years since it was his leadership and generalship, from the Battle of Belmont through Appomattox that created and cemented his reputation as a military great. Brands tells this story by interweaving battlefield events, and the politics of senior leadership, with the story of Grant. This method tells both the story of Grant and the war, and how the two were related.

At the same time, it was his war years that created the conditions for him to become a two-term president, with only his modesty preventing a third. Yet at the same time his presidency and the years following his years in office, can be seen as an extension of his wartime leadership as he sought to solidify what had been won. He fought for the civil rights of the recently freed slaves under the 14th and 15th amendments from the perspective that after all the blood had been shed it would have been for nothing if African Americans had been returned to their former status in reality if not in law.

Obviously any book has to address the war years and his presidency, but Brands also addresses Grant’s upbringing, his early military career in the Mexican-American War and on the west coast, his near failure as a businessman before the Civil War, his post war years as the head of the US military, his peace efforts with Native Americans, and his time after the presidency. Brands paints a picture of a modest man with a great deal of integrity who won the war for the north, and worked extremely hard to preserve the peace. It can almost be argued that winning the war was easy, winning the peace was not; something for which Grant has been given little recognition.

I definitely recommend this book. It’s easy to read, addresses Grant’s life, decisions, successes and failures, and includes a brief review of how historians’ have changed their views of Grant since his death.
Read more
23 people found this helpful
Helpful
Report abuse

Craig W. Bourne
5.0 out of 5 stars A great book about a great man
Reviewed in the United States on January 31, 2017
Verified Purchase
This is a terrific examination of a man whose place in American history is not as prominent as it should be. Brands does a very good job of bringing us into the mindset of the times in which Grant lived, when he was one of the most famous and widely respected people on Earth. The success of the lost cause argument and the deification of Lee have led Grant's military achievements to be largely overlooked for generations, and the corruption of politics during the Grant administration has tainted his political record. But here, Brands does a wonderful job of reminding us that his contemporaries viewed Grant very differently. Essentially, Grant comes across as an extremely principled and patriotic person who did what he perceived as right at a time when that was not always easy. This led him to be accused of being a "butcher" during the Civil War, and led some in the south to blame him for what they saw as unfairness during Reconstruction. But Grant can legitimately be said to be the person most responsible for ending the Civil War, and what he did for the freedmen during Reconstruction was both courageous and just. He was far from perfect, and Brands does not attempt to hide his flaws. But after reading this book, the reader will understand why Grant was received with honors literally around the world during his post-presidential tour. He was an absolute giant of his time, and it's a wonderful thing that he is beginning to regain his rightful place in American history.
Read more
10 people found this helpful
Helpful
Report abuse

Michael E. Fitzgerald
4.0 out of 5 stars The Civil War's Victor
Reviewed in the United States on February 28, 2015
Verified Purchase
There is something of a well-deserved renaissance going on with respect to General of the Armies and former President Ulysses S. Grant. One of the oddities of the war's aftermath is that Robert E. Lee is glorified as the epitome of all things military while Sam Grant is vilified as a butcher or a drunk. Lee surrendered to Grant at Appomattox, did he not? Moreover, Grant would capture 3 Confederate Armies, intact, in the field at Fort Donnellson, Vicksburg and Appomattox. No other general officer on either side would capture even one.

The same thing goes with Grant's Presidency. During his eight years, Grant's Cabinets would experience various scandals. Historians often depict his 2 Administrations as the most shameful in US history, with Grant himself the most dishonorable President ever, despite the fact that after multiple investigations no instance of wrongdoing was ever tied directly to Grant. It's almost like the academics need to be flagged for piling on, especially when the man was exonerated.

H. W. Brands has written a book that seeks to restore the luster to Grant's tarnished image. Above all else Grant's Presidency would dedicate itself to the cause of Civil Rights, ensuring during his term at least, that the rights won for all citizens during the war would not be lost during the ensuing peace. Grant would not allow sectional politics to defeat what battlefield victories had won. Speaking with Otto Von Bismarck years afterward Grant would define his position as follows, "As soon as slavery fired on the flag it was felt, we all felt, even those who did not object to slaves, that slavery must be destroyed. We felt it was a stain to the Union that men should be bought and sold like cattle." Therein lies the nub of Grant.

H.W Brands does a good job of analyzing Grant's reconstruction policies and his determination that Civil Rights won would not be lost. It was one of Grant's fundamental strengths and is the highlight of this book. Grant strongly felt that the survival of slavery or state sanctioned policies accomplishing the same end "meant the germs of a new rebellion". It is overlooked today but the period 1868 to 1876 was marked by rampant violence and election fraud throughout the South. It was the Hay Day of the rise of the Ku Klux Klan. Grant did not hesitate to employ the military to restore order when necessary. To this day Grant is not widely recognized as one of the United States' original Civil Rights leaders. According to the author however, after Grant resigned the Presidency, it would be 100 years before another President would take US Civil Rights as seriously.

A lot went on during and after the Civil War. A whole economy was reordered, generating issues we still struggle with today. This book by Brands shows what a messy process it was. Ulysses S. Grant's winning the peace during his Presidency was far more important than his generalship in winning the war. The war had claimed 600,000 lives on both sides. Grant's Presidency gave the country time to begin the healing, ensuring that despite the significant unresolved differences that remained, that armies would never again enter the field.

This is a fine, well written, well researched work. Ulysses S. Grant was a most judicious steward of change, the right person for a most turbulent time, and H.W. Brands gives him his due.
Read more
6 people found this helpful
Helpful
Report abuse
See all reviews

HBH
4.0 out of 5 stars An Excellent Biography of Lincoln's General
Reviewed in the United Kingdom on November 19, 2016
Verified Purchase
The Man Who Saved the Union by H.W. Brands is an excellent biography of Ulysses Grant, a former soldier plucked from obscurity by the Civil War to become first, Commander of the Union forces and then President.

It is well-written, detailed and informative and offers an interesting re-examination of the much maligned Grant presidency.

Louis Nosko
3.0 out of 5 stars War, yes; peace, not so much
Reviewed in Canada on January 8, 2013
Verified Purchase
A full biography of Grant is very welcome. I think this book does justice to Grant as a military leader & his place in American military history. On the other hand it is inadequate in dealing with the scandals of his presidency. Much more attention could have been devoted to this, but perhaps Brands felt those aspects were covered more fully by him in book, "American Colossus". The one big complaint I have is the total lack of maps. There should have been some detailed maps for the various campaigns in the Civil War. But more importantly there should have been maps for the campaigns in the Mexican War, and the various locations on the Pacific coast where Grant had spent some time.
Read more
Report abuse

Carmel Suttor
5.0 out of 5 stars Moving Tribute
Reviewed in Canada on September 12, 2017
Verified Purchase
This is a loving portrait of a good man who has been neglected or maligned for too long. Brands has an engaging style and chooses his anecdotes well.
Read more
Report abuse

W. P. Ireland
5.0 out of 5 stars Saving the union
Reviewed in Canada on May 19, 2015
Verified Purchase
This is a good book. Lot's of "new" facts, interestingly written. One gets a definite picture of what Grant must have been like
as a person.
Read more
Report abuse
See all reviews
Back to top
Get to Know Us
Make Money with Us
Amazon Payment Products
Let Us Help You
EnglishChoose a language for shopping. United StatesChoose a country/region for shopping.
© 1996-2021, Amazon.com, Inc. or its affiliates