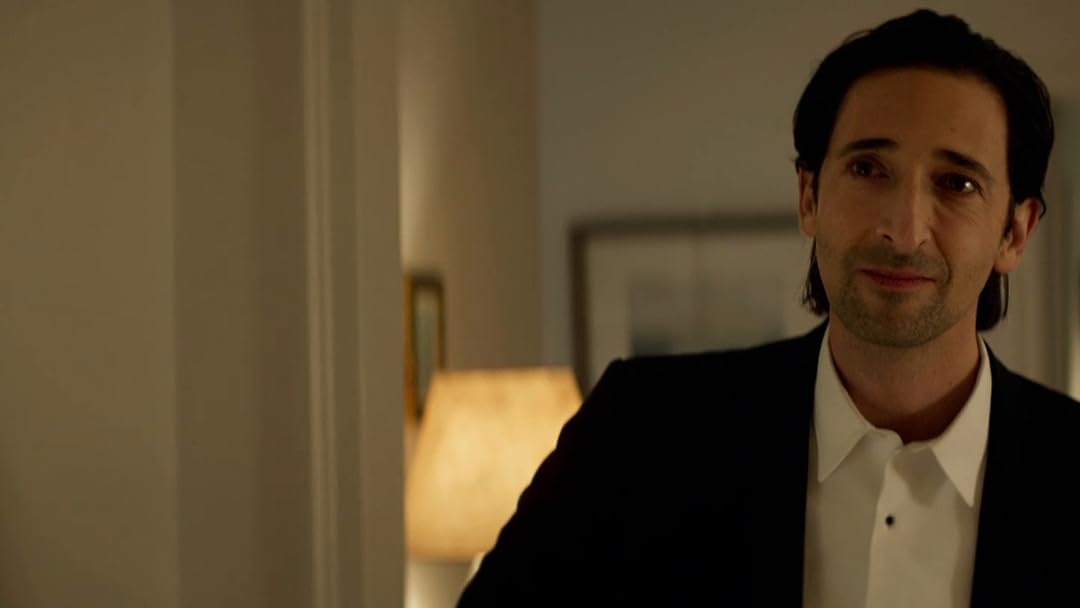 (366)
1 h 53 min2016R
When an alluring widow asks a journalist to solve the mysterious death of her filmmaker husband, the inquiry draws him into a dangerous world of adultery, blackmail, and murder.

Dix88Reviewed in the United States on December 29, 2020
2.0 out of 5 stars
hateful ending
Verified purchase
I love Adrian Brody so my husband & I streamed this. But the female lead character was so sleazy, having sex with strangers to please her husband. Her husband was severely weird/hateful. Why Brody's character would spend half a second with that woman is beyond me.
Noir feel. But disgusting sexual activities.
And the end. I will do a spoiler if you want to know about the ending, which was cruel & hateful. Do NOT watch this film if you are an animal lover
spoiler:

The female lead keeps alluding to this "horse story" throughout the film. Turns out, she begged her stepfather for a horse. He told her he'd get her a horse if she had sex with him (she was 9) So she did. On her birthday he took her to the horse & shot it. It is a gruesome, vicious scene, nothing left to the imagination. I utterly despise whoever wrote this script for putting that in. Really disgusting.

James C SmithReviewed in the United States on January 6, 2021
4.0 out of 5 stars
Brody Is Phenomenal
Verified purchase
AMAZON PRIME VIDEO

Adrian Brody nails this role and almost single-handedly makes this movie transcend from being pretty good to being truly great. Seeing his name as the lead is what made me decide to watch it, and that hunch paid off yet again. After first seeing him in the superb film "The Jacket" (which is also where I first saw Kiera Knightley and Daniel Craig), he's been one of my favorite actors.

This movie also stars the young, pretty blonde (Yvonne Strahovski) who starred as Sarah Walker on the popular TV show "Chuck". She's a lovely woman, but only an OK actor, so I was surprised to see her co-starring on the big screen with Brody. And she clearly had no clause in her contract about refusing to do nude scenes.

The actor playing the lead villain (Steven Berkoff) was highly skillful in his role as a despicable but somehow pitiable billionaire.

As for the movie overall, the story is complex and at times very dark, but it is quite compelling. It definitely kept me guessing, and I'm fairly good at predicting the outcome of movies' stories.

Most of the writing was viable. Some was not. But enough was to make it quite good.

Brian A. BergmanReviewed in the United States on January 15, 2021
5.0 out of 5 stars
Classic Noir
Verified purchase
I am into Noir movies. For the last few Saturday nights around midnight my wife and I watch the noir segment on TMC. We saw the likes of Ann Savage, Veronika lake, Alan Ladd, Tom Neal and many others. This move is like an updated version without the impact of the censors or the 1940's. Some of the negative reviews of this film are unfair. the movie is not that predictable. there are many surprises and much villainy. Adrien Brody is excellent and he could have been a gumshoe as easily as a journalist. Yvonne Strahoski was beautiful. I have been a fan of hers since Dexter. I am equally enthralled with Jennifer Beals who although it was not much more than a cameo was excellent. Campbell Scott was an SOB.
The entire cast was great. The movie was very dark and explores human depravity and nastiness. However, it is noir art. Watch it and enjoy. Also, it was done in good taste. The nudity was minimal as was the gore. Sometimes you can demonstrate horrific things with very little.
8 people found this helpful

Roger ByrdReviewed in the United States on January 5, 2021
4.0 out of 5 stars
Absorbing De Palma-esque Noir
Verified purchase
I am astonished that this very well-constructed suspense thriller passed under the radar when it was released in 2016. Maybe it's a little dated, and maybe a little too imitative of Brian De Palma. Adrien Brody is perhaps a bit too much the hardboiled gumshoe, a down at the heels tabloid reporter rather than a down at the heels private detective, but it's a great story — about stories, and who gets to tell them to whom, and who has a right to hear them, and what happens to them when they hear what can't be unheard. This film gradually peels through all the layers of the onion, keeping a firm grip on the viewer's attention from start to finish. There is ample copulation, some of it off-putting, but most of it integral to the plot. What is most remarkable is the empathy that we end up feeling for every major character, even the villain, whose ruthlessness combined with old-world charm is deftly conveyed in Steven Berkhoff's performance. I think that's Bob Odenkirk in a cameo as the awful stepfather in a scene that will be upsetting and possibly triggering by people (like at least one reviewer here) who are more upset by animals being harmed than people being killed in very nasty ways. I was expecting this film I'd never heard of to be mildly entertaining at best, and probably too mediocre to finish watching, but it was actually very good, and a nice surprise.
2 people found this helpful

CKJReviewed in the United States on March 24, 2019
4.0 out of 5 stars
Excellent Suspense 4+ - Flavors of Basic Instinct?
Verified purchase
Prior to Handmaid's Tale, I had not been introduced to the delight that is Yvonne S. Well done, reminiscent of Basic Instinct from so long ago. In fact? Call this a contemporary Basic Instinct, but because we are no longer as easily shocked? It didn't garner greater buzz. (Or perhaps I just missed it). Part of me wants to give this a 5, but that implies Oscar level and I wouldn't quite say it's that. Enjoyed enough to write a review, which I never do. Enjoy the film if you watch.
8 people found this helpful

seameaReviewed in the United States on January 23, 2021
1.0 out of 5 stars
What Just Happened?...
Verified purchase
I was hoping to see a suspenseful intriguing movie but all i got was confusion and more questions. I only watched this movie because Adrien Brody was attached to it. I mean, Adrien won an Academy Award so this movie HAS to be good, right? Wrong! The movie is terribly slow and there's no character attachment, meaning you don't care about the characters because they're not fully developed. And the premise for the movie just doesn't make sense. A newspaper reporter that thinks he's a detective and two psychologically disturbed married people with an open marriage...what could possibly go wrong? Waste of time and no, I don't recommend this movie. 1/22/21.
4 people found this helpful

Khristine JacksonReviewed in the United States on February 17, 2021
4.0 out of 5 stars
Dexter's ... Girl
Verified purchase
To be honest ..I only wanted to watch this movie because the blonde actress .. The really attractive actress ..was in the series "Dexter". Of course I'm familiar with actor Adrien Brody.. what chop's .. He won the Academy award at age 29 for the motion picture "The Pianist" .. I am certainly looking forward to seeing that film on Prime. Actress Yvonne Strahovski .. is such a wonderful actress in the offing. Campbell Scott played her tortured husband who has such strange perversion's. He is the son of Hollywood royalty. is late parents were the acclaimed movie stars .. George C. Scott and actress Colleen Dewhurst I saw Campbell in a movie called "Dying Young" with Julia Roberts back in the early 1990's. He plays a Cancer patient and she is his care giver. Miss Flash Dancer aka as Jennifer Beals plays his _(Adrien's wife).. Linda Lavin and actor Steven Berkoff ..who we all remember was the bad guy in "Beverly Hill's Cop".. back in the 1980's.. The movie had a few hit's and misses.. Jennifer was miss cast in the film. She didn't appear to have any chemistry with Adrien's character . Sadly will fall into the type casting a a "Femme fatale " due to her look's. It's like the Halle Berry syndrome.. Beautiful women will never be taken seriously as an Dramatic actress .. unless they follow the Elizabeth Taylor train. Elizabeth Taylor won two Oscar's.. and she did that because she had to play against .."Type" .. New York City is a wonderful city when filming and the location's suited the film. Adrien was one of the Producer's to this project. Not bad ..

Richard A. ColeReviewed in the United States on January 7, 2021
4.0 out of 5 stars
Not bad
Verified purchase
Not bad. Well acted, well shot and the story was decent. The plot was better than many, if not a bit too over-board and dramatic at times. You will have to watch it and make your own decision. Some parts are a bit weird, but not too much, just different.
Last- The sex scenes were no big deal. It seems the prudes are put off by any type of sex, in ALL movies. They were a bit bland and generic to be honest.
4 people found this helpful
See all reviews
Back to top
Get to Know Us
Make Money with Us
Amazon Payment Products
Let Us Help You
EnglishChoose a language for shopping. United StatesChoose a country/region for shopping.
© 1996-2022, Amazon.com, Inc. or its affiliates