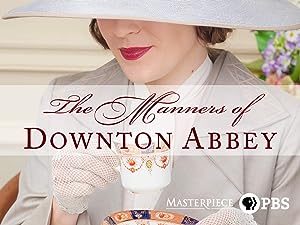 The Manners of Downton Abbey

Season 1
(602)7.620157+
Join Alastair Bruce, historical advisor to Downton Abbey, as he reveals the secrets of how the aristocratic set dined and dressed, how they married and made money, how they interacted with the servants, and above all why they behaved as they did in 1900s Britain.

Diane L. JohnsonReviewed in the United States on August 9, 2015
5.0 out of 5 stars
Interesting and Fun Background of Historical Aspects of Downton Abbey and the Edwardian Era
Verified purchase
Any fan of the British costume drama Downton Abbey will enjoy this behind the scenes look at how the show maintains historical accuracy from what type of gloves are worn, and when, to which women are allowed to wear a tiara (only married ones) to why the Earl wears different hats then every other man. It is a fascinating hour of factual tibbits looking at the rules the Edwardians lived by, and why, both upstairs and downstairs. Filmed at Highclere Castle, the great British estate house that doubles for Downton Abbey, the historical expert takes the viewer through the ritual of dinner time, starting with the amazing detail and percision which goes into the table setting, chair placement, etc., and then goes into rules of dinner conversation. There is plenty information about the rules of dress and jewelry. Also interesting are the rules that dictate the lives of the downstair staff; their working rules, their relationships with each other, etc. There are interviews with some of the show's cast, which gives an interesting idea of how uncomfortable those early dresses (and corsets) were to wear, the plethora of gloves and the demands of working on such an historically demanding show. Overall this is a highly entertaining and even educational hour, not to be missed by any early 19th century history buff. I would highly recommend it.
79 people found this helpful

MyD -- The ViewpointReviewed in the United States on November 17, 2015
5.0 out of 5 stars
EDWARDIAN RULES vs. A CHANGING WORLD --- BRIEF AND AIRY, BUT SURPRISINGLY DETAILED
Verified purchase
"If I should search for logic, I would not look for it among the English upper class" -- Violet Crowley, D-Countess of Grantham

At just one hour run time, one shouldn't expect this program to offer a complete guide to acting like an aristocrat. However, it does offer some fairly nice detail that illustrates the complexity of Edwardian age manners vs. a world beginning to modernize. It is hosted by Alastair Bruce, historic adviser to the production. Yes, he is also of the famous family line Bruce. Here are all the main topics with just a few highlights of what was discussed in each:

HOW TO EAT: "Nothing succeeds like excess" -- Ritual of the Dining Room -- Setting the Table -- Service Procedure -- Table Conversation -- and we thought a 6 place setting was complicated. Try 6 spoons just to start with! One might think the intricacy of the table would be boring, but this ballet of table service was amazing. Not designed to teach you to set your table though.

HOW TO MARRY: Coming Out in Society -- The Season -- Lineage & Burk's Peerage (Posh Bible of lineage) -- Aristocrat Courtship -- Staff Courtship

HOW TO BEHAVE: Social Etiquette -- Cool Reserve & Manners to Protect Position -- Manners of Staff -- The mention of how the French Revolution affected British Aristocratic Behavior (to protect position) was quite interesting, though brief.

HOW TO DRESS: Dressing to Make a Statement (I don't work, people help me dress, I am in charge) -- Tiaras and Gloves

HOW TO MAKE MONEY: Old Money (and the failure of the old way) -- New Money -- Knowing Your Place -- Stewardship of the Aristocrat for his land and tenants

This program uses scenes from the show and behind the scenes footage, almost exclusively, as Alastair discusses the various topics. With only a one hour run, there was the obvious danger of being superficial, useless or trite. However, I thought the goals were very well defined and ultimately realized. It's detailed just enough to drive the point home. It makes you feel the complexity of that world without having to explain every detail. I was also struck with how many choice one-liners Maggie Smith is given in the show, like when she asks awkwardly "What is a week-end?" Those quotes are replayed frequently in this documentary, and it's great!

Doc W8Reviewed in the United States on November 17, 2015
5.0 out of 5 stars
Effortless???
Verified purchase
Watched this on Amazon Prime, did not buy it. Loved this show as I was very curious about so many details in Downton Abbey. This explained how a proper table was set, and how people used each utensil during a meal. Dinner was the highlight of the Edwardians' day. The clothing styles required help to put them on, and must have been very uncomfortable both for men as well as women. I wondered why the upper class characters did not acknowledge the services provided to them, and learned that if they had done so they would have had to do it constantly as so many things were done for them by the staff. In fact, gratitude was the least expressed feeling in the show!
11 people found this helpful

MusicLoverReviewed in the United States on November 19, 2015
5.0 out of 5 stars
A great insight to another time and place...
Verified purchase
I found it very enjoyable and it was this program which actually made me want to watch the series. Puts into picture for the viewer the times and the reasons for all the Gentry classes manners as they try to hold on to their privalged past.As the Decline of the British Empire is taking place and the slow rise of what becomes the middle class in England
17 people found this helpful

mshefflerReviewed in the United States on October 27, 2015
4.0 out of 5 stars
Good, but missing some details
Verified purchase
I liked it and thought it was interesting. It would have been helpful to have seen it earlier, but there are so many spoilers up until about halfway through the fifth season that I wouldn't have wanted to have watched it any earlier than I did. It helped me figure out the difference between British behavior and Edwardian aristocratic behavior. I'm so American, I know... I just wish they were more specific at some points about the types of clothing for the different occasions (what types of outfits for which times of day, coat tails v. no coat tails) and the social status situations within the show. They talk about Sir Richard Carlisle and touch on Matthew's complicated social status, but I think it really would have added to the discussion on class if they added Tom's create-your-own-social-class phenomenon in there--even and especially if that sort of thing never would have happened. Even adding information about Isobel would have added to the program. They made sure to point out the flaws in the Anna/Bates relationship. Why not Tom and Sybil?
9 people found this helpful

The Glass BoxReviewed in the United States on January 25, 2021
5.0 out of 5 stars
History, Not Just Romance
Verified purchase
So many period dramas are only about romance, romance, romance! While Downton is a period drama with romance in it - the romance isn't the only subject matter. It's really a story of the turning of the old era into the modern one. It focuses on the life experiences of the downstairs help as well the upstairs aristocrats. If you like history, it's a good bet. :)

TimoWheeReviewed in the United States on August 6, 2015
5.0 out of 5 stars
This fascinating series pulls back the curtain on Edwardian manners
Verified purchase
Upon first impression Downton Abbey seems to be a "stuffy" place. It is! But the manners of Downton Abbey are more than affectation. As Alistair Bruce argues convincingly in The Manners of Downton Abbey, it is through manners that the Grantham family does its part to uphold the empire. I admire Alistair Bruce for the rigor with which he has applied his expertise. This is an important aspect of the Downton Abbey story. In this fascinating series, Bruce is given the spotlight to educate us on the nuances of behavior that define Edwardian society. It is fascinating and fundamental to understanding the denizens of Downton Abbey upstairs and down. The insight gained by watching this series most definitely increases the fun of watching the show.
5 people found this helpful
See all reviews
Back to top
Get to Know Us
Make Money with Us
Amazon Payment Products
Let Us Help You
EnglishChoose a language for shopping. United StatesChoose a country/region for shopping.
© 1996-2021, Amazon.com, Inc. or its affiliates