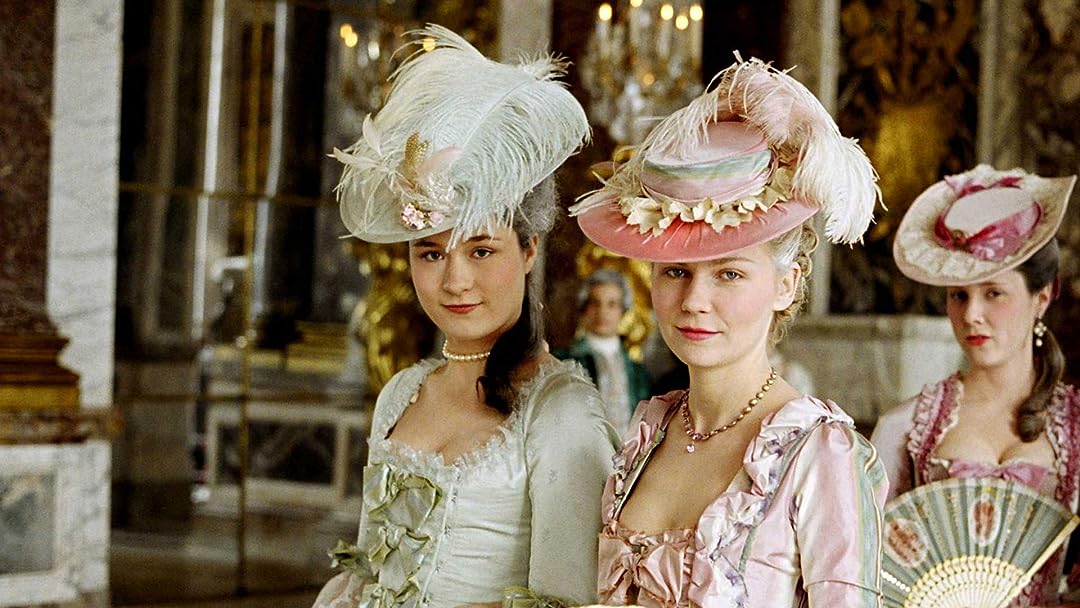 montecarlostarReviewed in the United States on January 28, 2019
5.0 out of 5 stars
Judge it for what it is
Verified purchase
Sophia Coppola’s “Marie Antoinette” is a girly movie about a girly girl, aka the Austrian-born dauphine of France, who at a very young age was confronted with the harsh reality of being away from her mother, her country, her family and even her pug. It is an idealized portrayal of what it must have been like to become Marie Antoinette, the much talked about, and much maligned Queen of the French.

Though normally I am very strict about the historical accuracy of period films, I feel that it is not the intention of this movie to take you to the classroom. Instead, it is intended as a fictionalized representation of the luxurious life in Versailles, with a glimpse of the intrigue, the gossip, the scandal, and the licentiousness of the French court of the late XVIII century.

The first thing that called my attention is the scarcity of substantial dialogues. This could very well be a silent film; just a few text screens to describe the situations would have sufficed. Many scenes are plagued by irrelevant phrases such as “good morning”, “thank you” and others of the kind. A few historical facts are thrown here and there to provide us with chronology, and though I did not find any noteworthy historical errors, if you really want to learn about the politics of the time of the French Revolution, I suggest looking elsewhere. You will not find much here.

The costumes and set in the palace of Versailles are total eye candy and remain my main reason to watch the movie over and over. No effort was spared to recreate the most minimal details to produce a stunning visual feast.

The music, contrary to what many here think was, in my opinion, entirely appropriate. In fact, it’s part of what makes this movie so distinct. Sophia wanted to make us experience what Marie Antoinette’s parties, shopping and dessert binges must have been like, and the anachronistic music —as strange as it may seem— is perfect to produce that effect in a modern audience. It was a bold approach and a brave move, but very well done.

There are also a couple of very powerful scenes in this movie. One of them, the Queen’s bow in front of the demanding peasants; or her sorrow after the birth of her nephew, before she could get pregnant; or take her loneliness at the Parisian opera, when other attendees refuse to join her claps. It takes an actress such as Kirsten Dunst to remain credible during such intense moments, after all the frivolity —and sweetness— of her character in the rest of the film.

I read somewhere that this movie was booed in Cannes by French reporters who wanted to see Marie Antoinette portraited as the evil queen they have been led to believe she was. Remember folks, if you are looking for historical depth, this is not your place. Ironically, Sophia Coppola’s Marie Antoinette may be closer to the real character of France’s last queen than what many history books teach.

Matthew D'SouzaReviewed in the United States on August 30, 2017
5.0 out of 5 stars
Who was Marie Antoinette at Her Heart?
Verified purchase
A beautiful film that looks into the sadness that Marie Antoinette must have felt in isolation surrounded by selfish people in decadence. Her own frivolous expenditures in full view in Sofia Coppola's gorgeous cinematography.

You get the feeling that Coppola wants the viewer to understand where Antoinette came from in her own perspective, so that you might better understand how someone could rot away in high fashion, delicacies, and opulence. It's a lovely piece of art film that captures the wealthiest times in France, the disassociated royalty, while also notably attempting to persuade you of Marie's humanity.

A character study within a historical picture, Sofia Coppola's Marie Antoinette is a blissful stroll through the garden, but be careful not to stay there too long, lest you give into the luxury. In all, Marie Antoinette is an exquisite narrative and emotional take on a much maligned historical figure treated with the utmost respect and care. Sofia Coppola has never filmed sorrow with such sublime reverence and reason. It's her Virgin Suicides on a much larger scale with a massive budget well spent. I highly recommend Marie Antoinette.
51 people found this helpful

Kathryn OcchipintiReviewed in the United States on July 13, 2020
5.0 out of 5 stars
Simply stunning portrayal of Marie Antoinette and human nature
Verified purchase
Simply stunning portrayal of the young Marie Antoinette at 15 years old when she was married to the soon-to-be king of France. Great character sketches of Marie and her husband and the way their relationship evolved over the years, as they grew from strangers into friends and then a couple who would ultimately meet their end together. Interesting look into the life lived in Versailles and in so doing no expense was spared in creating fantastic period clothing for a very large cast. Although Marie Antoinette has been characterized as self-absorbed and frivolous, this movie portrays the psychology behind her actions and I felt sympathy for her from beginning to end. A Shakespearean understanding of human nature prevails in the interactions of all characters in this film. Truly a work of genius.
11 people found this helpful

CCReviewed in the United States on September 24, 2020
2.0 out of 5 stars
Superficial, Choppy, And Going Nowhere
Verified purchase
This movie is a collection of choppy scenes. Too many things are squeezed in with odd rock music, and the movie does not flow well. They took way too much time to show the daily life of the Palace in the first half of the movie, and run out of the time for what's more important. If you don't have historical knowledge, this movie may be hard to follow, from who's who to how things are happening.

I don't feel the characters are authentic enough, either. Fersen, for example, was not a superficial playboy as depicted in this movie. This is more like a 21-century soap opera with 18th century dresses, than a historical drama. Everything is so shallow and cheesy.

The movie ends with a scene where the royal family is forced to move out of the Versailles to the Tuileries Palace, never to return. Sadly, the ending doesn't stay in your heart. Neither does the whole movie.
10 people found this helpful

YasueReviewed in the United States on December 12, 2017
5.0 out of 5 stars
Hate period dramas? Me too, but I loved this!
Verified purchase
As soon as the credits wrapped from my rental, I bought it. I can tell it's one I will watch again, for the fine details and for the exquisitely crafted world that makes it feel as though you are there. Now, if you think you know the story, go and read up on the much debated aspects of her life first. The director does an impeccable job of conveying what it may well have been like to be in the shoes of Marie Antoinette. Dunst makes you empathize with her through brilliant acting. Heck, the whole cast is masterful. I'm not a fan of period dramas *at all* and I was captivated and even though my husband had no interest in the topic per se, he was drawn in as well. Most of all, I love that she's neither hero nor villain-queen, but just humanized. That's refreshing.
25 people found this helpful

Tiffany L DuhartReviewed in the United States on March 2, 2019
3.0 out of 5 stars
Watch for the Visuals
Verified purchase
The documentary on Marie Antoinette is my most favorite documentary of all time. This is not that, and don't come into this movie looking for accuracy. This is all about pretty dresses, pretty wallpaper, just a confectioners swirl of pretty. Everything else, characters, story, takes a backseat, and I mean back of the bus. This is a far cry from The Other Boleyn Girl and The Tudors. Marie Antoinette's life was resplendent and tragic, and we only get to see one of those. We do not get to see anything happening in France that extends further than her bedroom window, and the affair in here (that's shown in the trailer) and carriage riding montages does nothing but take up space that could have been used for more gripping scenes, such as the family's escape from Versailles. Except for the unfavorable slice of life ending, I knew what I came for. I came for sugar and I got sugar. Plenty of it.
15 people found this helpful

chuck rimmelReviewed in the United States on April 22, 2020
1.0 out of 5 stars
Terrible - Lazy filmmaking
Verified purchase
This was not the story of Marie Antoinette - it could have very well been the story of ANY princess/queen and seemed mostly like a screwed up Cinderella. The film lacked any story telling abilities and had no narration. It also wasnt anything about Marie Antoinette. This movie used the worst music possible for the vibes of the scenes. Sorry, but 80s rock music on blast is not historically correct and doesn't even go. This movie was all about costumes and stupid hair. They even left out the part where she lost her head! I fail to even see the point of this movie.
11 people found this helpful

TalkdtwoReviewed in the United States on October 2, 2020
2.0 out of 5 stars
Stiff acting, drawn out
Verified purchase
The positive is the costuming. Fabulous. Everything else is so very poor. First, the music was the worst decision these folks made. It's not so much that it is modern music, it's that the music doesn't fit... much like the the prince and princess at the beginning of their marriage. The way that she expresses her distress is a perfect rendition of what this music does to the movie. Next is how they draw out the fact that these two haven't consummated their marriage. There was so much they could have focused on instead of that for that long... literally half of the movie revolved around that. Lastly, the lines are delivered as if they were being read instead of acted. Definitely 1 star. The scenery is beautiful, the sets are beautiful. And for that, I give it an extra star.
6 people found this helpful
See all reviews
Back to top
Get to Know Us
Make Money with Us
Amazon Payment Products
Let Us Help You
EnglishChoose a language for shopping. United StatesChoose a country/region for shopping.
© 1996-2021, Amazon.com, Inc. or its affiliates