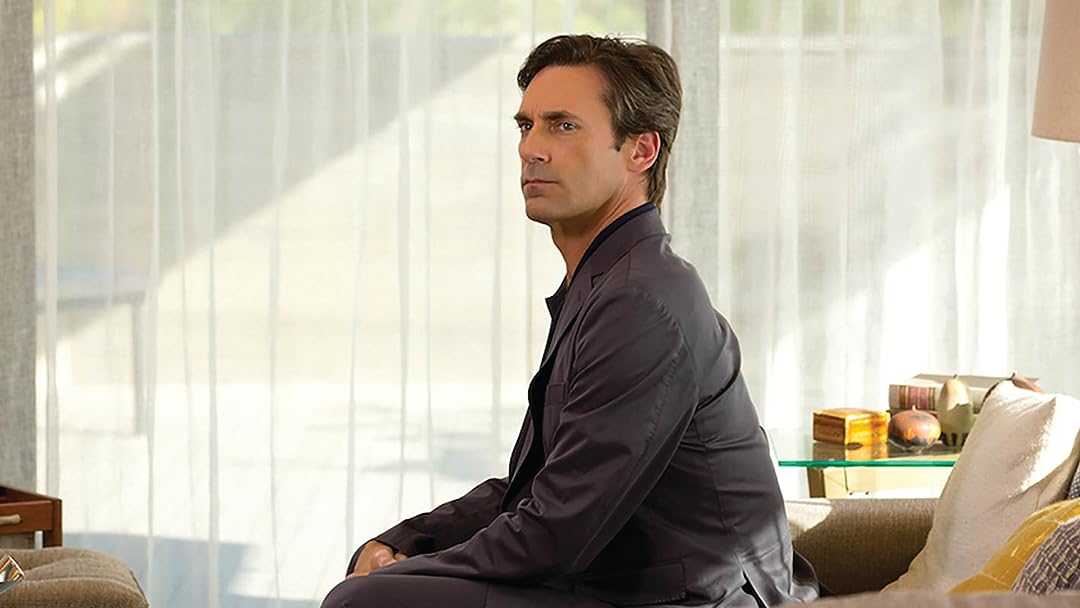 (211)
6.31 h 39 min201713+
In the near future, a time of artificial intelligence: 86-year-old Marjorie (Lois Smith) -a jumble of disparate, fading memories-has a handsome new companion (Jon Hamm) who looks like her deceased husband and is programmed to feed the story of her life back to her. What would we remember, and what would we forget, if given the chance? Also starring Oscar-winners Geena Davis and Tim Robbins.

P. JacksonReviewed in the United States on December 27, 2017
3.0 out of 5 stars
If You've Cared for Elderly Parents or Ever Lost Someone
Verified purchase
No idea how to rate this, so just putting an arbitrary 3 stars on it. The main thing to know up front is that this movie will resonate most with people who have lost a loved one or who are caring for elderly, disabled loved ones. I agree with all the reviews here, both the positives and the negatives. It is beautiful, thought-provoking, unexpected and moving. It also drags so bad the first half that I'm amazed I hung in there. The story and dialogue are intriguing, but it's so monotone, along with all that crashing ocean or rain, that you may zonk completely out. Honestly, I started doing other stuff and just left it running for a while. Later when it got better, I had to rewind to see what I'd missed. I was glad I did. This movie could have strongly benefited from better editing and prob on the writing, too. As the eldest of 3 daughters myself, I cared for both my elderly parents for years. It was very intense and difficult. It's been over 10 yrs now since they passed, but this movie made me think about them a little differently, and consider who my parents really were, especially before I came into their world. I cried after watching this movie, for the first time in months.
55 people found this helpful

J J.Reviewed in the United States on August 27, 2019
5.0 out of 5 stars
not "slow"
Verified purchase
I noticed several reviewers said it was "slow." I pass up many movies because they are slow. But this movie was superb, and it was well in keeping with the theme and plot. One of the obvious themes is time and aging. The irony is that while it seems to bring the viewer into a moment-by-moment procession, it is juxtaposed against the seemingly abrupt deaths and the immediate replacement of the dead which happen so quickly that it makes their lives seem shorter. Hence the movie pushes things along quickly, not slowly. If the acting were less than superb, then perhaps this movie would move slowly. Another thing is it's reference to when they met- while watching My Best Friend's Wedding, a movie that seems recent to the view, but just further illustrates the quick passage of time, as it plays with the viewers current perception. And, the viewer learns that the foreboding "music" signals another death, as well. Less is more, here. It is simple in the presentation of characters and plot, yet complicated at the same time. I cannot say enough about this movie and it would take up a lot more space for me to go into the layers of meaning it provoked.
9 people found this helpful
_Reviewed in the United States on December 23, 2017
4.0 out of 5 stars
Poignant and thought-provoking, even if slow at times
Verified purchase
As artificial intelligence in its nascent form today continues to advance, I wonder whether we'll one day interact with simulations of people lost to us. Would that be a good thing? I don't know the answer to that—time to reflect and ponder, and no clear right answer probably exists. The film made me think along lines I hadn't considered before. For example, Geena Davis's character, quoting a researcher, said that we don't remember original events but instead recall the last time we remembered them—accounting for how our memories fade. (It reminded me of Dr. Pulaski's explanation in TNG of replicative fading: making a copy of a copy.) The movie makes plain and painfully visible the effects of declining health and faculties. It also touches on whether sentient AIs are capable of love and, perhaps, could be subject to the same degradation that organic beings experience.

Often I'm leery of movies that are free to Prime members (having seen recently a few flops). But as someone interested in how technology evolves—and who hopes to see the Singularity—I'm glad I watched this. Great performance by a small but powerful cast.

PayneReviewed in the United States on December 14, 2017
3.0 out of 5 stars
Not Quite Prime Time
Verified purchase
The premise is interesting and the acting, particularly by Tim Robbins, is terrific. But the script doesn't fully explore it's ideas, is too repetitious, lazy even after the first 30 minutes. Why must we be dropped in at the beginning of each 'Prime' training? Essentially, this is having to watch the first act played out 3 times over. Anyone intelligent and patient enough to stick with this film is also perceptive enough to pick up on the subtleties of seeing how the relationship between human and Prime would evolve over time. Though the ending is profound, it's muted by the tedious journey leading up to it.
9 people found this helpful

painterReviewed in the United States on February 7, 2018
4.0 out of 5 stars
Marjorie Prime
Verified purchase
I hardly know where to start. I would say that if you are into action and fast paced scenes and dialog this isn't the movie for you. It's a cerebral and introspective look at life, death, relationships, loss and perceptions. The pace is quite slow, necessary for communication of the key elements of the story---passage of time and the nature of our relationships with those we love.
All actors gave superb performances; this is the first movie I've seen with Gena Davis in many years. Jon Hamm was surprisingly good (I liked him in Mad Men, but this is SO very different), Lois Smith gave a nuanced performance as Marjorie and let's face it, Tim Robbins is fantastic no matter what he's in. A surprising cast that worked well together.
This movie touches on the things we all think about as we grow older. There were a couple of scenes early in the movie (Marjorie has dementia) that brought up a lot of sadness for me; they seemed to have been filming my own sister in the last year of her life, it was that real.
My advice if you're waffling on watching is to gauge your mood, keeping in mind this is not a movie that will necessarily lift the spirits.

Bret ArmstrongReviewed in the United States on December 10, 2017
5.0 out of 5 stars
I LOVE THIS FILM: Stunning atmosphere, Superb Acting, and Direction, Brilliant Plot, plus so very many innovations at all levels
Verified purchase
All aspects of the script and cinematography were fresh and imaginative, cutting right through the edge of the proverbial repetitive envelope so taken for granted by even the best of films. The way it plays us off each other as a symposium of embodied personalities - real and artificial - contrasting with each other again in such intimately felt ways amidst the stillness & music.
17 people found this helpful

It's a strange movie that is often hard to watch. In many instances I feel like I was intentionally kept me on the edge of understanding, which acted as a barrier for my emotional connection (given the negative bent, this was surely a good thing as none of the characters were overtly likeable or engaging). There was also a starkness to the topic, so I'm guessing the relative starkness of the dialogue, setting, and atmosphere were intentional and, at times, metaphoric choices? All told, we're really only offered very limited snapshots of these characters' lives, so there's no sense of fulfillment, completion, or even meaningful development that meaningfully supports our connection to what is passed off as progression. Although I was struck by the straightforward approach to human interaction and dialogue, I continually found myself wanting answers that I never completely could formulate based on the minimalistic approach. Based on the same, I and the movie were left wanting.

Having said these things, I realize that the minimalistic and metaphoric approaches were likely conscious choices made by the director. Regardless (and based on my feeling underwhelmed and somewhat averse after watching this movie), I'd have to say they weren't the best choices for this movie as they didn't serve the material, the characters, or my interest.
4 people found this helpful

V ChampReviewed in the United States on March 4, 2018
5.0 out of 5 stars
So worth the watch! Mesmerizing...
Verified purchase
My brother insisted I watch this one- and I'm so glad he did! Thought provoking! Many twists but not for shock value as much as letting the full story evolve and reveal itself when it is ready. Don't let the small cast or lack of car chases turn you off. LOL. This story is told mostly through its dialogue and subtle elements. Pay attention- small details are important and often come up later in the movie. Honestly, I''m not sure if I fully understand the very end but I'll be watching this again to see what I missed. Each actor delivered an incredible performance. Caution: I think there are a couple mistakes in the "starring" list on this Amazon description. Check IMDB fo the true list.
10 people found this helpful
See all reviews
Back to top
Get to Know Us
Make Money with Us
Amazon Payment Products
Let Us Help You
EnglishChoose a language for shopping. United StatesChoose a country/region for shopping.
© 1996-2021, Amazon.com, Inc. or its affiliates