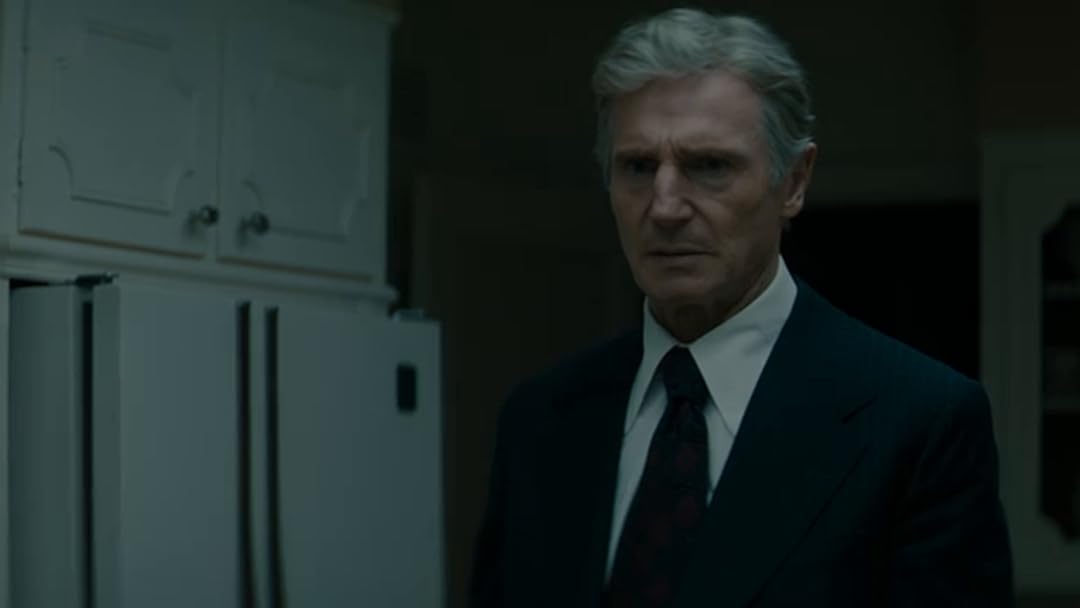 Mark Felt - The Man Who Brought Down The White House

(2,843)
1 h 42 min2017X-RayPG-13
The powerful true story about brilliant Felt, “Deep Throat” the Watergate whistleblower, who sacrificed everything in the name of justice.

Kindle CustomerReviewed in the United States on June 26, 2018
5.0 out of 5 stars
Superb movie, superb acting job by Liam Neeson!
Verified purchase
Great movie, great retrospective for those of us that were THERE! Superb acting by Liam Neeson! I was surprised that he was playing the title role of such A very AMERICAN historical moment, and especially in such a rigidly defined persona as an FBI agent of that era would have been. But he can absolutely do ANYTHING, and make it utterly convincing.
The movie itself is absolutely riviting. It was fascinating to see the OTHER side of "All the President's Men," some 40-odd years later. Never, in my wildest dreams, would I (or anyone else, in 1972/74) ever, believe that the leak came from the upper echelon of the FBI! For someone who had devoted a lifetime to keeping the most important secrets of the nation under wraps, this must have required incredible courage, incredible internal strength, and a sense of faith in knowing that he was doing the right thing (in the end). The movie portrayed the anguish that Mr. Felt must have suffered, not just having his orderly work world fall apart, but seeing his country coming unglued at the seams all around him by day, then going home to relationships that were crumbling and broken by night.
This was a very complex story to tell, with so much going on all around the central characters, and I think that the movie succeeded admirably. I actually FELT as if I were back in those confusing, unnerving days as I watched it. The mood was set up exactly as it felt during that time.

Bill JacksonReviewed in the United States on March 20, 2018
3.0 out of 5 stars
Good But Sorely Lacking
Verified purchase
This film was sorely lacking in Felt's involvement with the Watergate scandal. In my opinion it would have been much better if it had gone into more detail regarding the clandestine meetings with Woodward. It was barely touched on by the script. It did provide a tremendous insight to his mental state and his feelings about being passed over for the much deserved promotion to director of the FBI. The cut scene of his grand jury testimony (which was included in the deleted scenes on the DVD) was most telling and would have almost been the high point of the movie had it been included in the original release.

All in all, I suppose the failure of movie was due to lackluster editing of the film. Liam Neeson's acting was spot on, however.

joel wingReviewed in the United States on December 16, 2021
3.0 out of 5 stars
Engaging story of the origins of Watergate's Deep Throat
Verified purchase
Anyone who knows anything about Watergate knows the famous name Deep Throat. He was the government source that told Washington Post journalists Bob Woodward and Carl Bernstein inside information about how the Nixon White House ordered the break in at the Democratic headquarters to try to undermine the 1972 presidential election. Mark Felt played by Liam Neeson was Deep Throat.

The movie portrays him as a company man. Someone who served FBI Director Herbert Hoover for decades and who wanted to protect the agency. Neeson also plays him as a man of integrity. When Watergate happens he has to pick between investigating the case or serving the government which is trying to cover it up. We all know what Felt ended up doing so it was up to the movie to make it an interesting explanation of his motivations and all the intrigue emanating from the White House.

I have to say it did a good job. The soundtrack for instance quickly takes a dark tone to create the mood. Nixon’s men like the FBI Director played by Marton Csokas looks sinister. You can feel the pressure the White House put on the FBI to hush things up.

The only problem with Mark Felt is a side story they have about his runaway daughter. It was meant to show him as a family man, but it was a complete distraction and waste of time.

history buffReviewed in the United States on March 9, 2021
5.0 out of 5 stars
EVEN IF YOU WERE NOT ALIVE DURING WATERGATE MUST SEE THIS!
Verified purchase
THIS IS A A REALLY IMPORTANT PART OF OUR HISTORY. Us people of a certain age, were glued to the tube during the whole Watergate hearings and the shocking truths that were uncovered. And it is even more powerful in terms of the context of the Trump abuse of power, making Nixon and company look way better. Nixon had a competent cabinet who mostly were retained by Ford. Ultimately Nixon did cooperate, in spite of his paranoid and slimy ways. Ultimately he did the right thing and resigned.
But specifically for this movie. There were so many things done right-- the lighting, the pace, the makeup. And the acting best of all. What a cast! This plays off so well with All the Presidents Men also with a superb cast.
Not enough had been told about deep throat/Felt and why he did what he did. This movie tells that story. Bravo!
4 people found this helpful

BeachAnchorReviewed in the United States on January 15, 2018
4.0 out of 5 stars
Felt Prevented Our Republic From Collapsing
Verified purchase
This is not a typical Liam Neeson action movie. It moves at it's own pace. Like a good book, it unravels and shows just how close the American government was in the early 1970's to cracking.

The Nixon administration was operating like an authoritarian government, and only the credentialed press and a few brave souls in the FBI were there to stop it.

It was 30 years before we learned that Mark Felt was Deep Throat and had provided so much of the critical information to keep our Republic free. Let's hope this is just the beginning of celebrating his courage.
61 people found this helpful

KatieHepburnReviewed in the United States on February 23, 2018
5.0 out of 5 stars
I liked!
Verified purchase
Great show. Movies like this, which are done pretty well, can incite a curiosity in a lot of us to read and research as much as we can, or want, to see how true to facts the movie followed life, to find more about events we are just learning, etc. I now feel like I know another man who affected US history.
20 people found this helpful

S. ScottReviewed in the United States on May 9, 2020
2.0 out of 5 stars
Disappointing.
Verified purchase
The movie was like a high level overview you would give a senior leader about something. It could have been so much more. I did learn that his daughter was involved with the weather underground, if you don’t know who they were, look it up. But he had a 31 year career with the FBI. Yes, the focus was watergate but even that was pretty well skimmed over. Don’t spend your money on this. If you want to know about Watergate watch All the Presidents Men and if you want a deep dive, or even a more interesting story about Mark Felt I’m sure there’s a better movie.
3 people found this helpful

Bjiou ApoloniaReviewed in the United States on January 12, 2018
5.0 out of 5 stars
slow to start but worth it!
Verified purchase
This movie is slow to start but is flipping awesome - the film details events that occurred after the watergate break in and the president’s attempt to get the FBI to back off the investigation. Apparently it is not okay for the President of the United States to shut down an investigation. And apparently there are negative consequences when a president tries to do so. I guess it has something to do with a concept called checks and balances. Amazing! Great movie!
13 people found this helpful
See all reviews
Back to top
Get to Know Us
Make Money with Us
Amazon Payment Products
Let Us Help You
EnglishChoose a language for shopping. United StatesChoose a country/region for shopping.
© 1996-2022, Amazon.com, Inc. or its affiliates