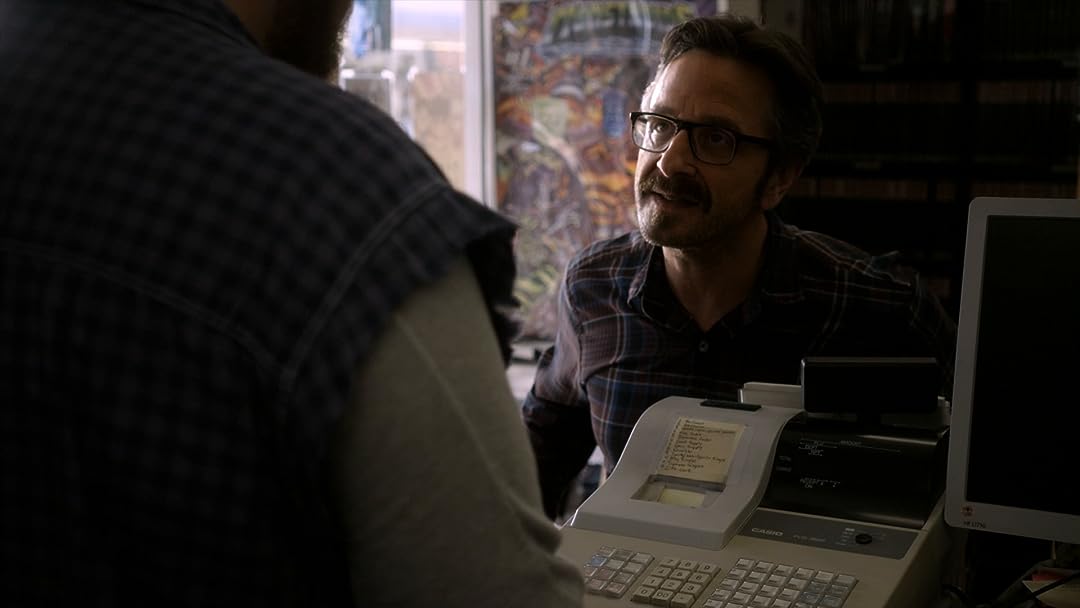 (139)
7.72013TV-14
Marc Maron has been a comedian for 25 years. He's had his problems. He was an angry, drunk, self involved, twice divorced compulsive mess for most of his adult life, but with the popularity of a podcast he does in his garage and a life of sobriety, his life and career are turning around.

Brian C.Reviewed in the United States on May 1, 2013
5.0 out of 5 stars
Looking forward to this one...
Verified purchase
I just finished watching the teaser episode for Marc Maron's upcoming IFC sitcom. I was a little nervous going into it. I have come to really like Marc Maron after listening to his podcast on and off for the last couple of years and I do not want to see him fail. But I thought the teaser episode was really strong. I am very relieved to be able to say, with total honesty, that I really enjoyed it. I feel like they have captured Maron's sensibility perfectly. Maron is, of course, playing himself. Everyone who has listened to Maron's podcast is intimately familiar with his neurotic insecurities. But most listeners also realize that in addition to his neuroses Maron is also a really sensitive guy with real heart. That definitely comes across in this show.

I am going to go on what might seem like a bit of a digression for a moment but it will all come back to this show. I promise. I was a big Family Guy fan right away. I thought the first couple of seasons of that show were as funny as anything I had ever seen. Then the show got cancelled. Then it came back. Initially, I was not as thrilled with the second installment of the show as I was with the first. It seemed like there were not as many laughs per minute. However, I continued watching, and I realized that the characters were becoming more defined. There still were not as many laughs per minute but the characters had become more interesting and the show was more interesting to watch even when I was not laughing. Eventually, I decided that I liked the second installment better, and when I look back on the really early episodes, I feel like, once the jokes had become stale, there was not a whole lot left.

The reason I bring this up is this: there were probably only a few laugh out loud moments in the Maron teaser episode for me. However, the characters were all very interesting to me. The story line of the show was interesting to me. I am so glad that they decided to have Maron playing himself. I am fascinated with the behind the scenes look we get of the podcast. I am fascinated by Maron's personality and his relationships. I know the show is fictionalized to some degree but it still feels like we are getting a pretty up close look at Maron's life and personality. I think I probably speak for many of Maron's podcast listeners when I say: I would watch that show even if there were no laughs. Of course, there are laughs. I thought the actor who played Maron's sidekick did an excellent job, but the show is not depending solely on laughs to keep the viewer interested.

The point is: there is enough substance in this show to make it worth watching even when you are not laughing. I think that is really important. I think that if Family Guy had remained on the path it was on I eventually would have gotten tired of it. Once the novelty of the cut away gags, and a baby who is an evil genius, had worn off, I think it would have become boring. Luckily, the show evolved. The characters became more interesting. The fact that this show is starting off with such interesting characters, and with real substance (the show definitely has a heart), is a good sign in terms of staying power. There were definitely some funny moments in the show, but I have realized over the years that the shows I keep watching are not the shows with the most jokes per minute, but the shows that have characters I care about, that deal with issues I am interested in, that have unique perspectives on life and the world, etc.. This show has all of that.

So, Mr. Maron, I would like to congratulate you on a job well done. I am looking forward to seeing where things go from here. I am wishing you the best of luck. You certainly have my attention...

DanReviewed in the United States on February 4, 2021
5.0 out of 5 stars
Marc Maron A+
Verified purchase
First found the show on IFC and immediately fell in love with it This show and Portlandia are the best give it a try you won’t be disappointed

Lisa H.Reviewed in the United States on August 26, 2013
5.0 out of 5 stars
WTF Fan
Verified purchase
I recently cut the cable cord, so I no longer get IFC directly. I'm so happy that I can select and pay for the shows I want to watch and Marc Maron's show is one of those. I've been a regular listener of his podcast WTF for over three years and I was excited about the premiere of his new show. I love his long form interviews on the podcast -- they've made me laugh out loud (yes, I spelled it out people -- I'm not keyboard lazy.) and dig deep into my heart about serious shit. I knew his show would be honest and brutally funny. I was excited that Amazon offered the show and made to sure to grab the episodes I missed after I cut the cable cord. Maron has a talented supporting cast and Marc hit his acting groove early on in the first season. Kudos to this 25 year comedian veteran for finally getting his own show. I'm happy to hear IFC was smart enough to pick it up for a second season.

Keep up the good work Marc -- you've earned and deserve all the success that is coming your way.
Boomer lives!!
2 people found this helpful

SanNic44Reviewed in the United States on October 11, 2013
5.0 out of 5 stars
Maron the Misanthrope Makes Me Laugh!
Verified purchase
Maron's show takes you into his world of comics, cats, and misfits who weave an often funny but sometimes poignant storyline. The setups are much more intelligent than the usual sitcom, and Maron delivers witty insight into the goings on via his podcast set pieces. What I like most about this show is the simplicity: no fancy camera angles, no over the top bling, no pretensions, just basic story telling with good twists and turns. I hope there are more seasons.
2 people found this helpful

corey f.Reviewed in the United States on May 4, 2020
5.0 out of 5 stars
Great cast and story line
Verified purchase
Funny man! Love this show and wanted to pay for it even with access. Support the actor and producer.

Samantha YoungReviewed in the United States on March 13, 2021
5.0 out of 5 stars
I love Mark
Verified purchase
Love him. Cracks me up so much

AshleyReviewed in the United States on August 9, 2020
5.0 out of 5 stars
I love this show!
Verified purchase
I am an alcoholic and addict and this show just really hit home for me. Thank you Marc, you inspired me to start my own podcast!

ArubinReviewed in the United States on August 12, 2021
5.0 out of 5 stars
Looking For Solutions
Verified purchase
Marc is the Jewish boy I always wanted to date. He has problems, they typically get resolved by the end of the episode.
See all reviews
Back to top
Get to Know Us
Make Money with Us
Amazon Payment Products
Let Us Help You
EnglishChoose a language for shopping. United StatesChoose a country/region for shopping.
© 1996-2022, Amazon.com, Inc. or its affiliates