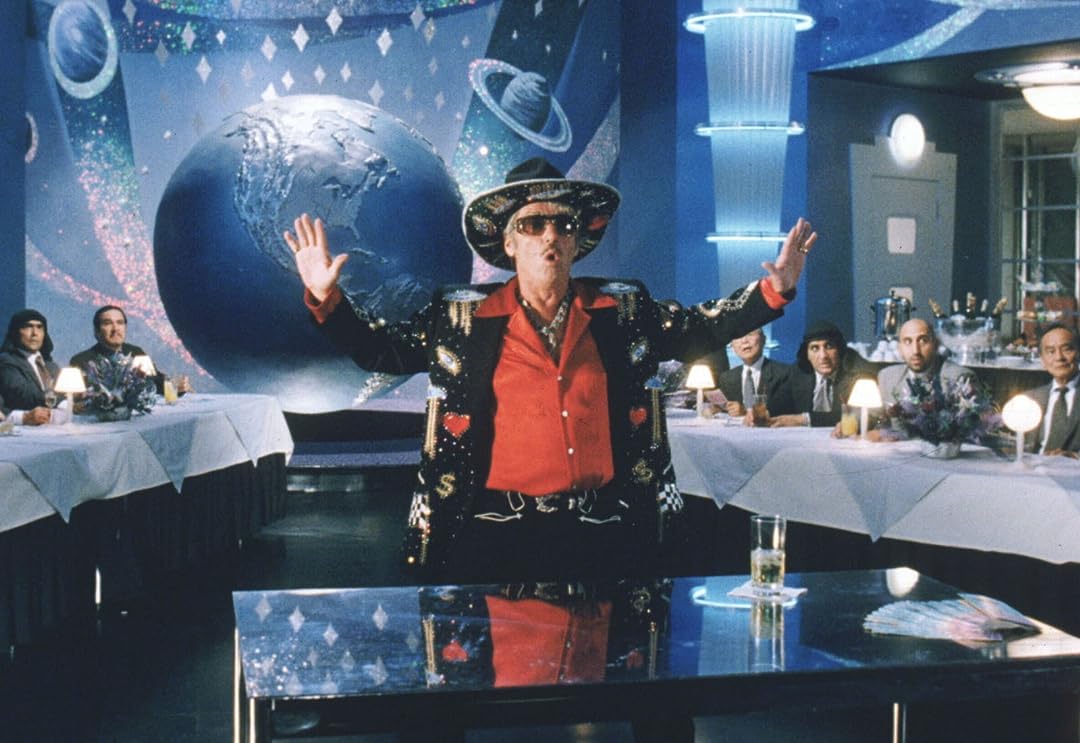 (8,886)6.31 h 45 min1996X-RayPG-13
Superstar Jack Nicholson as the President of the United States greetinginvaders from outer space? Anything can and does happen when the twistedmind of director Tim Burton.

Zachary LittrellReviewed in the United States on December 11, 2018
4.0 out of 5 stars
Celebration of giddy, goofy, 50's sci-fi fun
Verified purchase
This is the Tim Burton I miss. Before the umpteenth "Johnny Depp does wacky things" flick, I miss the Tim Burton who put goofiness and HEART into a movie. Mars Attacks! is a love letter to a by-gone era of film, y'know, back when Americans socked aliens right in the dome.

And the best part is the rest of the cast knows to have fun, too. Hamming it up for the camera and overacting galore. It's a movie about making memorable scenes, not making a political point or any sort of social commentary (except maybe a few jabs at America in general, "They sure ain't going to get the TV!"). The end is a little sudden and abrupt, as though it ran out of its own manic energy at last.

At the end of the day, how can you not like a movie that grabs every actor from Michael J. Fox to Joe Don Baker, and throws in Tom "It's Not Unusual" Jones in for good measure?

Real LifeReviewed in the United States on December 10, 2018
1.0 out of 5 stars
No voice audio!!!
Verified purchase
I have ordered this movie from Amazon about a year ago then finally decided to watch it for the first time yesterday but then that's when I came across a problem. There is no voice audio just the sound effects audio. So basically you'll be watching a movie just with mouth movement and no audio to it. I've contacted Amazon about it but it was already pass due, so they claim they can't do anything about it. So if you do order it as soon as you get it play it and make sure it has voice audio. Don't wait a year like I did or else you might be wasting money on this movie. Although still a good movie.
18 people found this helpful

Memento_MoriReviewed in the United States on December 17, 2018
3.0 out of 5 stars
Doesn't Really Hold Up
Verified purchase
All-star cast. Tim Burton back when he actually tried. Hurray, right?

Not really. The characters are all silly, but they're too silly and have no heart. The aliens finally attack, and while a funny scene, I didn't care if anyone died. I didn't root for anyone to survive. I laughed here and there, but I didn't care. Usually when a movie has no real plot the acting can carry it through. And if the acting can't, then maybe the message can. Nope, nope, and nope.

Watch this as a callback to Burton's top form, when he wasn't just a slave to keeping Johnny Depp and HBC paid, when he knew more than the "classic" Burton aesthetic. But don't expect to care about anything that's going on. This is too shallow a movie for that.

dcitrowReviewed in the United States on February 9, 2018
5.0 out of 5 stars
Everything you love to hate about a movie!
Verified purchase
I owned this years ago on VHS. I lossed it, so ordered the DVD. Still great after all this time! It's got just about every movie cliche' you can think of, plus makes fun of the actors who were very "serious" at that time. I gained new respect for Tom Jones back then (who I never liked before) and now love hearing his music. I gained more respect for a lot of actors in this movie. I love anyone who is willing to make fun of themselves!
For a younger audience, they wouldn't recognize all of the actors and not quite get all of the humor, but they will love it just the same!
Along with "Edward Scissor Hands", I think this is one of Tim Burton's best movies.
19 people found this helpful

Amazon CustomerReviewed in the United States on February 24, 2019
2.0 out of 5 stars
Trying too hard to be awful
Verified purchase
This is the most insanely cast worst films of all time. I saw it in 96 and thought to myself, "Maybe I just don't get it?" 23 years of life and a lot of objective thinking later, I still don't get it and there are a lot of Tim Burton movies I love. I get this is an over-acted zany parody of 50's sci-fi but I feel like Tim was trying too hard to make an awful movie so rather than being able to appreciate schlock for schlock sake, it feels like every A-lister in this is breaking to fourth wall nudging me exclaiming "ehh, isn't this funny how awful I'm acting?" In short, "Mars Attacks" felt like it was trying to be too many things so it ironically didn't do anything truly well. It was just comedic enough that I had no emotional investment in any character but was just macabre enough that I couldn't take it as a comedy. Big budged enough with all the ILM fueled CG and cast but trying to be a cultish B-movie. That push-pull exists in character development, SFX and plot. Kind of like the song that kills the Martians, it makes your head hurt trying to figure out what it is until Tom Jones stands at the end, singing "It's Not Unusual" to a bunch of animals (then you explode). Maybe, just maybe it was a big middle finger to Independence Day, which came out five months earlier? In fact, seeing the odd parallels, I'm hoping that is the case. The odd thing is, Independence Day is funny to me because it's an awful film trying to get people to take it seriously, which is why I love to watch it and laugh. This is a good directer and a stellar cast trying to be awful and it is, but not in the way you hoped it would be.
4 people found this helpful

ANDREW M.Reviewed in the United States on February 26, 2020
5.0 out of 5 stars
Nice Planet. We'll Take it!
Verified purchase
This underrated, quirky little throwback to the Science Fiction / Alien films of the 1950s is weird, wild and hilarious.
Starring an all-star cast, this "Aliens Vs. Earth" epic is an acquired taste, that's not for everybody. But I enjoyed it! As long as you take it for the kind of film it is, you will too...

Now, although this Blu Ray release is a definite upgrade to the original DVD release from yesteryear, it does leave a bit to be desired. The print that was used for this release is good over-all but it still suffers from some crushed details here and there. The colors really pop and are vibrant but there are some issues with the black levels. For the average viewer though - It won't be distracting enough to not enjoy it.

No Bonus Material at all - Which is a shame, because a retrospective documentary or some production featurettes would have really sweetened the deal.
4 people found this helpful

Jack RyanReviewed in the United States on December 5, 2018
5.0 out of 5 stars
The sign of the donut
Verified purchase
Love this movie. Up there with Galaxy Quest and Dark Star, 3 great sic-fi spoofs. Great cast, excellent retro-cheesy look, lots and lots of funny bits and lines, and Tom Jones. It just doesn't get better.
15 people found this helpful

B. WellsReviewed in the United States on January 19, 2020
1.0 out of 5 stars
Awful Has a New Name
Verified purchase
If evil intergalactic aliens do indeed exist, they must surely include "Mars Attacks" amongst any arsenal designed to break the mind and spirit of rebellious earthlings. Sitting through the thing is sheer torture and I was ready to give up the names, ranks, and serial numbers of anyone and everyone in order not to endure one more nanosecond, had I, in fact, been privy to any names, ranks or serial numbers involved in any known causes of extraterrestrial interest. Without doubt, "Mars Attacks" is one of the worst films I've seen in my lifetime, and that's saying a lot.

Stuffed to the brim with Hollywood big-wiggery, "Mars Attacks" is a bomb in every sense of the word. Jack Nicholson elicits nary a chuckle, as he assumes not one, but TWO, roles, grimly grinning and mugging as both a poseur POTUS and a seedy real-estate developer (if they had been combined into one character, it might seem eerily prescient). Nicholson is at his most determinedly Jack-ish here but even that can't save "Mars Attacks": in any case, he seems more desperate than amusing. As the First Lady, Glenn Close can't seem to figure what the heck she's doing here; she appears lost and completely out of her element. Close can be funny when she has good material to work with but she's not what I'd call a natural comedienne. That's an even bigger problem for those in the cast who are, in actual fact, well-known as comedians (Martin Short, Jack Black, Michael J. Fox). The script just doesn't give them any funny lines: everything they're called on to say, and (nearly) every situation they're given just falls flat. Annette Bening, as the developer's boozy girlfriend almost has some funny moments but the writers don't allow the laughs to develop (a shame, because unlike Close, Bening is a gifted comedienne). The scenes with Sarah Jessica Parker and former James Bond, Pierce Brosnan, are meant to be funny but they're merely creepy and a little gross. When a loud and obnoxious Danny DeVito is thrown in to up the noise level and compete for non-laughs, I was ready to shut it down. And yet I persevered. Thanklessly. The longer the movie goes on, the more blatantly unfunny it becomes. The only time I felt amused was during a scene when alien-in-disguise Lisa Marie sashays her way into the boudoir of horny White House Press Secretary Martin Short. For a moment there, "Mars Attacks" achieves a silly, woozy charm that only serves to highlight the deficit of such in the rest of the movie. Inexplicably, former action stars, Pam Grier and Jim Brown, appear to be on hand to bring a certain gravity (and color) to the film as there seems to be no other reason for them to be there. They aren't allowed to be funny even for a moment, and the earnestness of their characters is a jarring contrast to the idiocy of all the white folks running hither and yon. And finally there's Sylvia Sidney. Yes, Sylvia Sidney of Hollywood's Golden Age. I'll just leave that bit of info right here without further comment.

The special effects aren't all that interesting, either. I love the old sci-fi flicks of the fifties and those cheapies featured better (and cheesier) space ships and aliens than those on display here. Maybe the aliens depicted in the Topp's trading cards (upon which this film is based) look more like those in the movie, but to be honest, I've never seen the trading cards so I don't know. Onscreen, they don't look that great, though.

Whether or not the director meant this as a tribute to, or a satire of, (or both) classic fifties sci-fi, "Mars Attacks" is a colossal cosmic misfire, easily Burton's worst film, and on my own personal list of the ten worst movies ever made.
3 people found this helpful
See all reviews
Back to top
Get to Know Us
Make Money with Us
Amazon Payment Products
Let Us Help You
EnglishChoose a language for shopping. United StatesChoose a country/region for shopping.
© 1996-2021, Amazon.com, Inc. or its affiliates