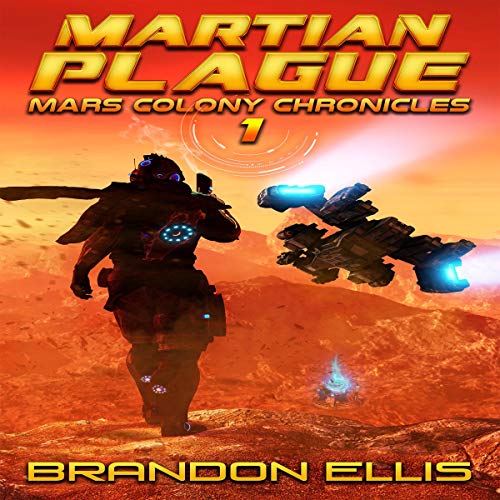 We expected Mars to be an escape, not a trap.

A crimson, blasted, frigid trap. Maybe humans were lucky to leave Earth as cowards...or maybe they should have died trying to save it from the aliens. Because what's now arrived on this red rock may be worse than death.

Aliens destroyed humanity and seized Earth. Now they have sent a terrible, unstoppable disease to the last human outposts on Mars.

The doomsday clock is ticking and only criminal archaeologist Ozzy Mack can decipher the clues buried in the ancient Martian ruins...clues to the cure and the salvation of humankind.

Unless it's already too late.

Warning: This book contains secret ancient Martian information and a lot of kick-butt action. If you're ready, grab a copy today!

Michael R. Slezak
5.0 out of 5 stars Indiana Jones meets Buck Roger's is what our hero Ozzy demonstrates throughout this novel.
Reviewed in the United States on January 22, 2019
Verified Purchase
Ellis has penned another great novel with the launch of Martian Plague (Book 1 of the Mars Colony Chronicles). This series promises to be another great series in Ellis's staggering list of great literary works.
Ozzy is a former professor on Mars that through a series of circumstances now finds himself as the Indiana Jones of Mars except all his discoveries are from illegal dogs! While his cause is novel, the guy just can't seem to catch a break as one bad situation always seems to end with him in a worse situation than before.
The action is voracious and never ending. When I finished page 1 I didn't stop till the last page. I highly recommend this novel and gladly award it 5 Stars!
Read more
5 people found this helpful
Helpful
Report abuse

Aurora Dawn
5.0 out of 5 stars Space Opera at it's Best
Reviewed in the United States on May 15, 2019
Verified Purchase
I loved this action packed science fiction story set on Mars. Ozzy, the disgraced archaeologist tasked with saving his daughter and, quite possibly the world, is just the kind of earnest, bumbling, morally ambiguous and totally lovable character you'd expect to find in a golden age pulp space opera - and that's high praise from some one who adores Heinlein, Pohl, Leiber , del Rey and de Camp. Ellis plays him off beautifully against Jozzi, the female police agent who betrayed him but clearly has a soft spot for him and the villainous High Judge who uses and manipulates him.
Gangsters, aliens and ancient beings fill out the cast as Ozzy rushes to locate the mythical cure that could save the population of Mars, and more specifically, his much loved daughter, but with all the obstacles ranged against him, it's far from a sure thing.
Well written, full of surprises and completely enjoyable. I look forward to the next installment in this series.
Read more
2 people found this helpful
Helpful
Report abuse

spincast1123
3.0 out of 5 stars Non stop action....sort of
Reviewed in the United States on February 21, 2019
Verified Purchase
There is a lot of action through out but I think that having photon blast after photon blast from his photon rifle gets a bit redundant. The dialogue seems a little stilted and predictable so after a bit I just skimmed. Generally it was alright but it doesn't seem to be written by an experience author who understands that there is no need to be repetitive. Most readers should know that a "Photon Rifle" shoot photon blasts and most females do not appreciate degrading references like "sweetheart" etc.
Read more
6 people found this helpful
Helpful
Report abuse

RicharH
5.0 out of 5 stars Neat idea
Reviewed in the United States on February 2, 2019
Verified Purchase
I like the premiss, smart archeologist blackmailed to do criminal digs and framed for prison. Add a vindictive alien civilization intent on genocide, criminal humans, a naive, but honest law enforcement agent, a group of crusading knights and a killer plague. Stir and heat. The result is more than the ingredients and moves with great chemistry. I well enjoyed it all. It was too short, so on to book two.
Read more
4 people found this helpful
Helpful
Report abuse

Kindle Customer
4.0 out of 5 stars Very Nice !
Reviewed in the United States on June 9, 2021
Verified Purchase
Very good pacing, this story flows quite well, and pulled me along with it. The characters are believable, the outlands of Mars are believable, all in all this is a quality read, a fine, crafted work. No sex, no drugs, no cursing, which is another nice featurre.
If you are looking for a fun ride in absolute Mar's habitats, check this out.
AndrewO, in San Jose, California
Read more
Helpful
Report abuse

The Mysterious Amazon CustomerTop Contributor: Fantasy Books
5.0 out of 5 stars Just: wow
Reviewed in the United States on December 31, 2019
Verified Purchase
Ok. Just: wow. Aliens take over Earth. Humanity’s remnants flew to Mars but a plague is sent to wipe them out ... but archeological ruins might lead to a cure ... but time is running out (a doomsday clock indeed) ... but ... Oh. Freakin’. God. Brain is exploding here, but in a good way (?!), as somehow Brandon Ellis manages to pull this all off in Martian Plague (Mars Colony Chronicles, Book 1), and amazingly its all done in a way that totally makes sense and is easy to follow, and is total fun. Highly recommended.
Read more
Helpful
Report abuse

Larry B.
5.0 out of 5 stars Call me sweetheart one more time and I'll.......
Reviewed in the United States on February 10, 2020
Verified Purchase
What a rollercoaster ride! The main character or "Hero" couldn't catch a lucky break it you put it in his hand.
Ozzy wants something (no spoilers), but so does every crook & politician (no difference). The author weaves his tale in such a way as to keep your attention & keep you guessing through out the entire story with the perfect segway into the next book(2).
Read more
Helpful
Report abuse

DDG22 Sailor
4.0 out of 5 stars Pretty good!
Reviewed in the United States on February 28, 2022
Verified Purchase
Pretty good story, fast paced and a fun read. Admittedly not the most loveable lead character but he grew on you. Looking forward to book 2.
Read more
Helpful
Report abuse
See all reviews

A Scary Man
2.0 out of 5 stars Gave up halfway through
Reviewed in the United Kingdom on November 8, 2019
Verified Purchase
Things happened with no real flow or consistency. The protagonists ran into one brick wall after another until I got tired of the repetition and skipped to the end.
Read more
Report abuse

Kindle Customer
5.0 out of 5 stars free book review
Reviewed in the United Kingdom on September 19, 2019
Verified Purchase
what a cracking story.well balanced mix of humour,action and pathos!
Read more
One person found this helpful
Report abuse

Kindle Customer
3.0 out of 5 stars Rolls along
Reviewed in the United Kingdom on October 16, 2019
Verified Purchase
Rolls along.

Alexander
3.0 out of 5 stars An okay read but not for me
Reviewed in the United Kingdom on September 19, 2019
Verified Purchase
If it was a movie it would be too loud. The story just seems to happen as if the author isn't sure about what's next.
I prefer the styles of Dan Simmons or Philip Jose Farmer.
Read more
Report abuse
See all reviews