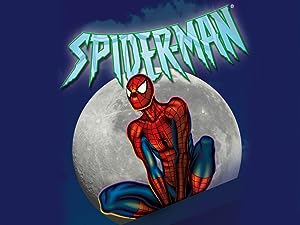 (96)8.41998TV-Y7-FV
A young man with spider like abilities fights crime as a superhero in New York City while trying to have a normal personal life.

The Golden RoseReviewed in the United States on February 15, 2016
5.0 out of 5 stars
A classic, the DEFINITIVE animated Spider-Man experience
Verified purchase
This is the ONLY place I have been able to find this long-forgotten but iconic 90's cartoon that isn't a pawn shop vhs/dvd bargain bin. I had to get it.

For many kids who grew up in the 90's this was what got them turned on to Spider-Man in the first place, or at least it fueled their love for the character when they finished reading their comics. You might even be able to make the case that his current popularity is owed in large part to this show.

The cartoon doesn't seem to show its age as much as other shows from its time except when they use the CG shots that simulate flying through NYC, which is wont to happen with CG since it has always advanced at breakneck speeds. The biggest nitpick you'll probably have about the show though are the amount of re-used animation sequences, which was done of course to save budget. Sometimes you'll notice certain bits of animation reused repeatedly in later episodes and such, but the animation itself is very high quality so there's a give and take there. Fortunately, this helps the quality of animation stay consistent, and it DOES have very high quality animation and character designs.

There's something about this show that feels more closely tied to the comics than any other form of Spider-Man related media since. There are instances where he'll have to change out empty web cartridges or deal with the mechanics of the equipment in his suit that just aren't addressed anymore in Spider-Man media (save for briefly in the most recent movie). The webbing also feels more like a utility rather than some magical substance that is always there doing exactly what it needs to do. Drawing attention to these aspects the way this show does makes things more exciting, and also makes him feel like more of a regular guy trying to be a superhero than a golden child whose powers and equipment can't also be vulnerabilities under the wrong circumstances. Think of it like watching Batman have to fight off bad guys without the use of his utility belt.

Since this show isn't available on Prime as of right now you'll have to shell out money for it, but if you've only got a few bucks to spend and don't want to invest in the entire show just yet, I'd recommend checking out "The Alien Costume" parts 1 through 3 from season 1. They're easy to follow, self-contained, and they tell the tale of how Venom, one of Spider-Man's most infamous foes, came to be. They'll give you a good idea of what you're in for.

Rashaan WilliamsReviewed in the United States on August 6, 2019
4.0 out of 5 stars
I haven't seen this cartoon in years.
Verified purchase
It's very exciting, and it has most of the Marvel Heroes.
Report abuse

Hanna MReviewed in the United States on September 19, 2017
5.0 out of 5 stars
Five Stars
Verified purchase
Perfect, finally a sturdy chord that can reach my bed! Love these!
Report abuse

Amazon CustomerReviewed in the United States on April 18, 2020
1.0 out of 5 stars
Please Refund
Verified purchase
Pissed my 6 yr old ordered this and I just found out and can't contact anyone because of Covid-19 no calls but can not delete on line after 48hrs. I hope I am contacted or this is reversed off of my account.
Report abuse

MatthewReviewed in the United States on December 20, 2017
5.0 out of 5 stars
Loved it
Verified purchase
Great
Report abuse

Linda MeadowsReviewed in the United States on March 31, 2016
5.0 out of 5 stars
My Spidey senses are tingling.....More new episodes please!
Verified purchase
Always in the mood for a good Spidey tingler !!!!
Report abuse
See all reviews
Back to top
Get to Know Us
Make Money with Us
Amazon Payment Products
Let Us Help You
EnglishChoose a language for shopping. United StatesChoose a country/region for shopping.
© 1996-2021, Amazon.com, Inc. or its affiliates